If mentioned out of context, the date, February 18th, 1911 would sound like just another day. But, unknown to most, history was made that day, when the first commercial flight in India took off from Allahabad with a consignment of air mail. Since then, civil aviation in the country has come a long way, and now India is the world’s third-largest aviation market! In 2018, approx. 139 million passengers flew through India. Presently, India has 22 national airlines and 132 airports. The biggest and busiest airports among these are integrated transit hubs with multi-modal connectivity to their respective city centres, and numerous runways and terminals. Read more about the 10 busiest airports in India ahead: 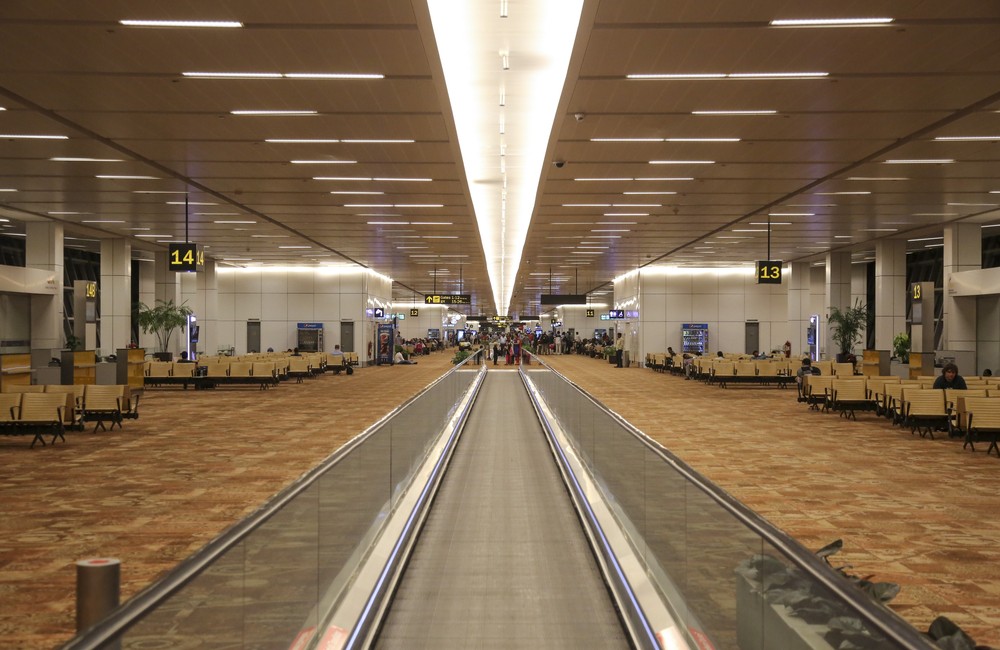 Located in the national capital, Indira Gandhi International Airport is not only the busiest in India but also the 12th busiest airports in the world. Handled over 65.7 million passengers in 2017-18, it is expected to cross 80 million passengers by the end of 2020. It currently functions with three runways (one of which is among the longest in India) and three terminals (T1C-D, T2 and T3). Under the expansion plans, a new terminal and runway are to be constructed, whereas the capacity of T1C-D is to be increased. It is connected to Central Delhi by the Airport Express (Orange) Line of Delhi Metro and National Highway 48.

Covering parts of the Andheri, Vile Parle and Santacruz localities, the Chhatrapati Shivaji International Airport in Mumbai is the second most significant air transit hub in India, catering to more than 48 million travellers in FY-  2018-19. An idea of the world-class service it offers can be gauged from the fact that it was judged the World’s Best Airport in the 40 mppa (Million Passengers per Annum) category along with the Delhi Airport at the 2017 Airport Service Quality Awards. It has two terminals (T1 for low-cost domestic flights and T2 for international and domestic operations) and two criss-crossing runways. Among its newest offerings is the Jaya He GVK New Museum (T2), which has over 5000 exhibits showcasing India’s culture and history. 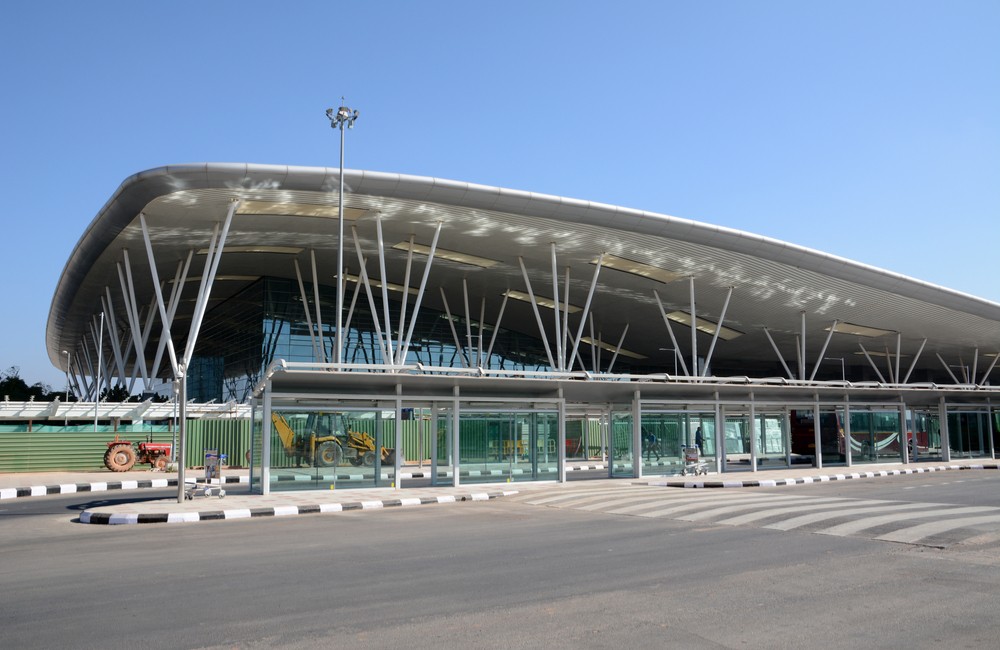 Opened in 2008 to replace the over-burdened HAL Airport, the Kempegowda International Airport in Bangalore has already become the third-busiest air transit hub in the country. Even with a single runway and terminal, it handled more than 195000 flights and 25 million passengers, respectively in 2017. Gate 25-26 at the international area of the terminal is designed to cater to the world’s largest airliner, the mammoth Airbus A380. The airport is currently undergoing expansion, under which a new terminal and runway are being constructed to further enhance its aircraft and passenger handling capacity. The airport enjoys direct connectivity to Bengaluru via National Highway 44.  Book hotels near Bangalore Airport. 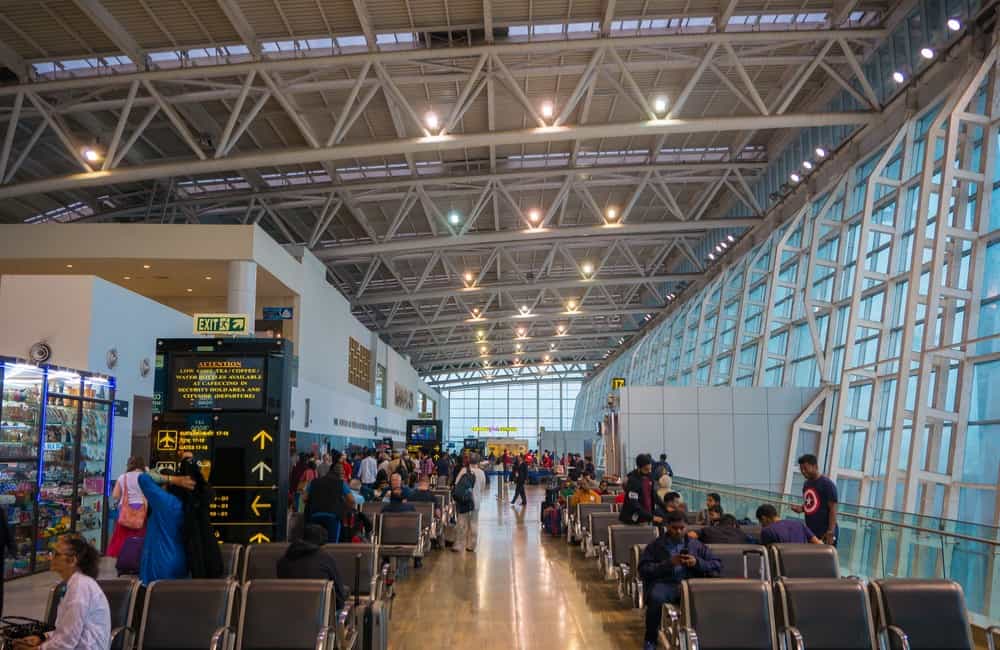 One of the earliest civilian airfields in India, Chennai International Airport is an important gateway into the country for people from South and Southeast Asia. With two terminals and runways each, it handled over 20 million flyers in FY 2017. Unlike most other airports in India with more than one terminal, the two terminals here are adjacent to each other and linked via a building housing restaurants and administrative offices. The airport has its own station on the Chennai Metro network, providing connectivity to the city centre. Passengers can enjoy a variety of dishes and also shop within the airport. Book hotels near Chennai Airport. 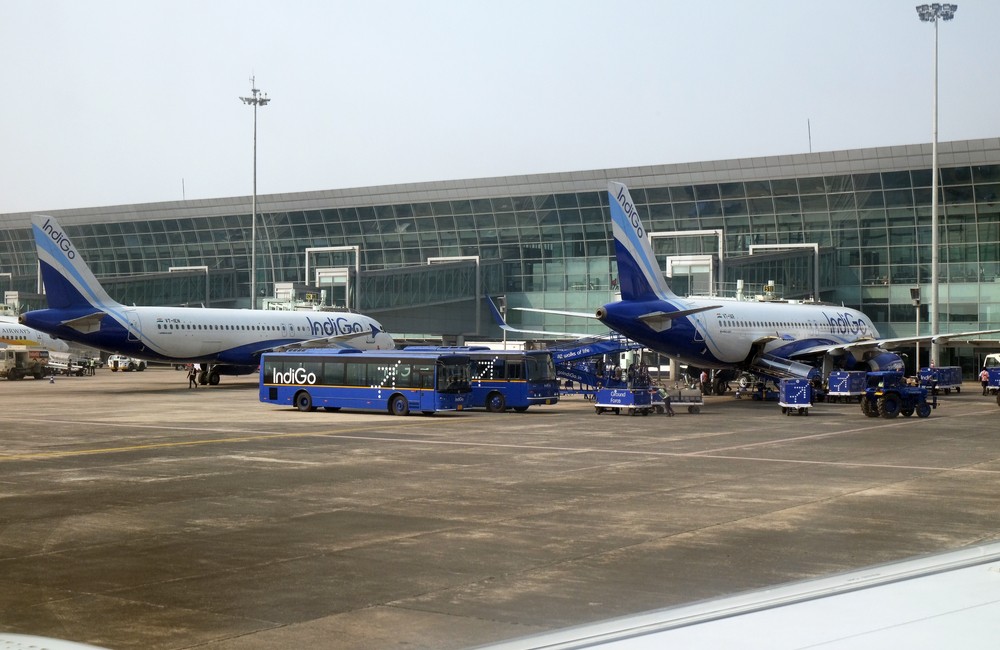 The Netaji Subhas Chandra Bose International Airport in Kolkata is steeped deep in history as Amelia Earhart’s ill-fated flight passed through it in 1937. As the number of passengers and aircraft movements grew, the airport was expanded 2005 onwards. As part of the plan, the runways were lengthened and CAT III instrument landing system was installed. Catering to just below 20 million passengers in Fiscal Year 2017, it is expected to breach its maximum passenger handling capacity of 26 million soon. Among the international airlines serving it currently are Air India, Biman Bangladesh, Bhutan Airlines, Emirates, Etihad Airways, Myanmar Airways International, China Eastern Airlines, Cathay Dragon, Silk Air, Singapore Airlines, Sri Lankan Airlines and Thai Airways. Book hotels near Kolkata Airport. 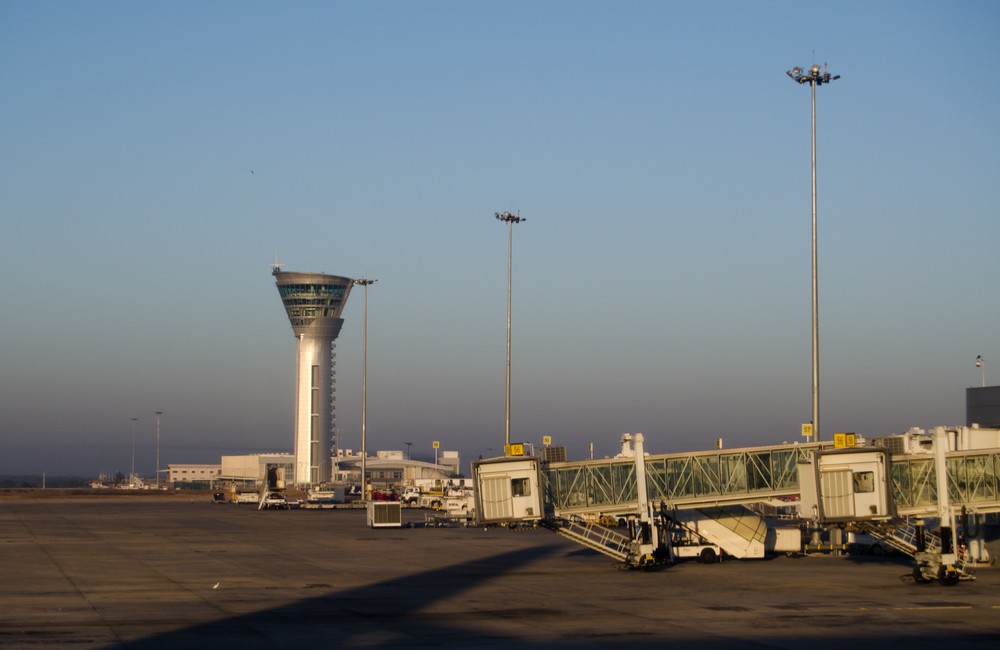 Planning for the airport began after Begumpet Airport became unable to cater to the rising number of passengers. In just nine years since its inauguration in 2008, it has exceeded its maximum passenger handling capacity of 12 million; more than 18 million flyers used it in FY 2017. One of its unique features is the airport village, which is no less than a boon for transit travellers. During their layover, transit travellers can meet their friends or family members in the village, located just outside the arrivals area. Like other major airports in the country, it is also scheduled to undergo expansion in three phases: Phase I designed to increase the capacity to 18 million, Phase II to 20 million and finally, Phase III to 40 million. Book hotels near Hyderabad Airport. 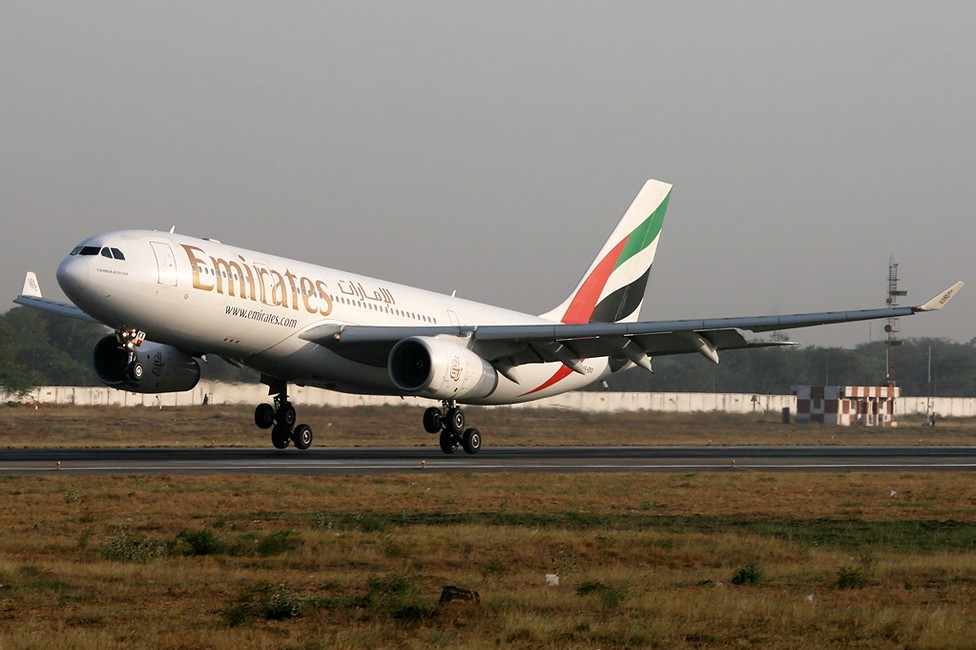 Though it has been in operation since 1937, international flights from the air transit hub began in 1991. Its current maximum capacity is around 8.5 million people, but in FI 2017, it had already handled over 9 million passengers! It presently has two terminals: T1 for domestic flights, and T2 for international and domestic traffic. These are interconnected by an around 500-metre long travellator or moving walkway. Transit travellers can relax at the luxurious BICA Lounge inside Terminal 1 and Port Lounge inside Terminal 2. Apart from lounges, the Sardar Vallabhbhai Patel International Airport in Ahmedabad also houses several duty-free shops and restaurants, and a cafeteria. Book hotels near Ahmedabad Airport. 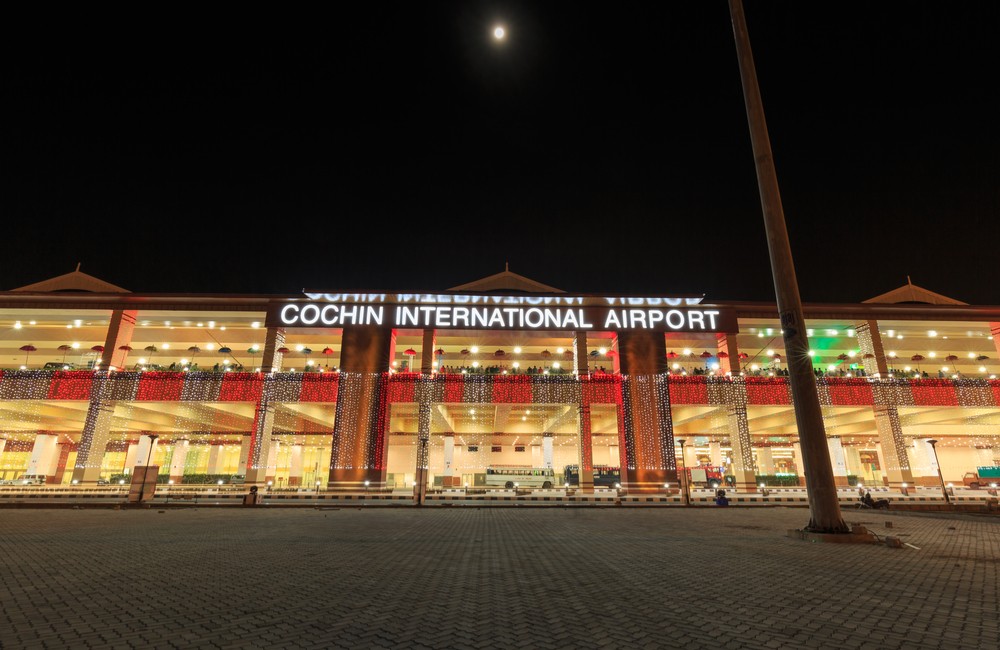 Opened in 1999, Cochin International Airport features traditional Kerala architecture. It presently has two domestic terminals and one international terminal, making it the only other airport in India than Delhi to have three terminals. This has resulted in a maximum capacity of 21 million, which is way more than what the airport is currently handling (less than 10.5 million travellers in FY 2017). Among the many milestones it has achieved is becoming the first airport in India to be completely powered by solar energy! Sharjah, Kuala Lumpur, Dubai, Jeddah, Dammam, Bahrain, Muscat, Doha, Kuwait, Singapore, Riyadh, Bangkok and Colombo are among the overseas destinations with direct connectivity to Kochi. Book hotels near Cochin Airport. 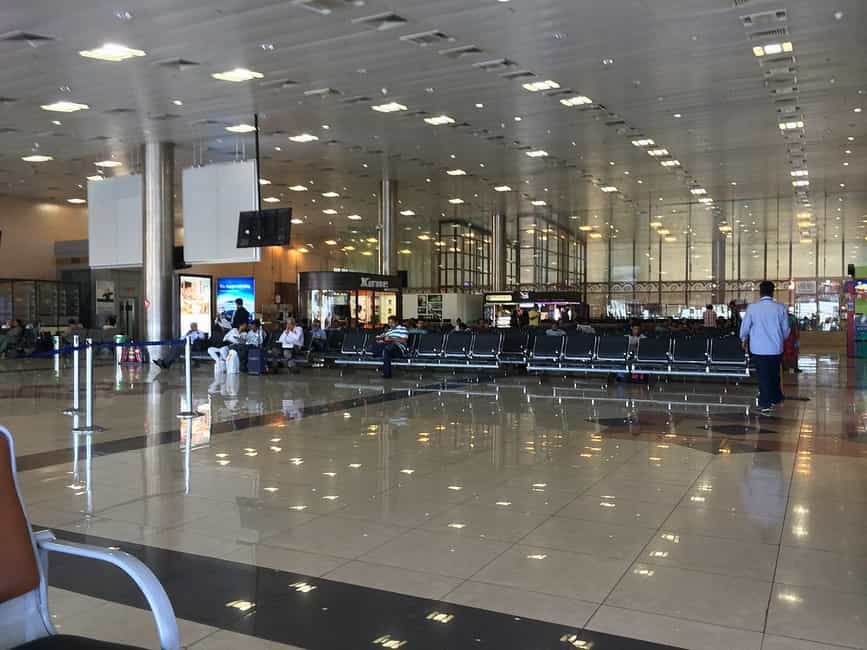 Used by just over 8 million passengers in Financial Year 2017, Pune Airport is presently the ninth-busiest in India. Established as an air base by the Royal Air Force, a part of it still functions as one, currently under the Indian Air Force. Though it has two runways, only one is used for flights; the other is utilised as a taxiway for military aircraft movements. Under the renovation scheme, the length of the runway is being increased for larger aircraft. Under the same plan, a VIP lounge and various modern amenities will also be developed inside the terminal by moving the administrative offices to a separate building. Book hotels near Pune Airport. 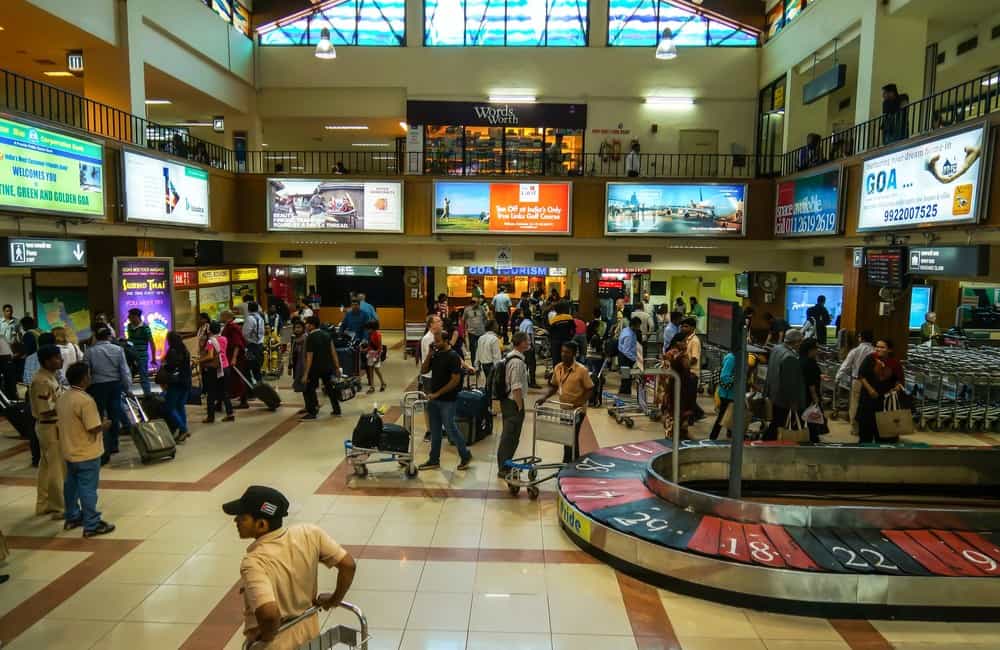 Located right beside the beach, the Dabolim Airport in Goa is perhaps the most scenic in the country. Constructed by the Portuguese in 1955, it functions partly as a civilian airport and partly as an airbase of the Indian Navy. Its new terminal, inaugurated in 2013, is operating almost at its peak capacity of 7.6 million passengers per year. The more than 50000 flights it handled in FI 2017 included scheduled, chartered and seasonal ones. Moscow, St Petersburg, Manchester, Kiev, Birmingham and Helsinki are among the international destinations with direct scheduled or seasonal flights to Goa Airport. Book hotels near Goa Airport.

As noted earlier, the capacity of all these airports is slated to rise, which has already created the demand for newer airports like Navi Mumbai Airport for Mumbai, Jewar Airport or Taj International Airport for Delhi, and New Pune Airport for Pune. This development in the air travel industry will definitely make the life of over 100 million tourists and business travellers easier.