9 Forts near Noida – A Glimpse of India’s Rich Heritage

Forts were built by rulers in the past to defend their kingdoms against invader attacks. Not only did these towering structures withstand the malicious intentions of enemies, but also survived natural calamities and severe weather conditions. Even after centuries, these forts stand tall as glorious as ever. The forts near Noida are no exception and look splendid due to the brilliant craftsmanship of the days of the yore. Offering an insight into the historical and cultural heritage of India, a visit to these forts is undoubtedly one of the most popular things to do in Noida.

Here are nine popular nearby Noida forts that you must visit: 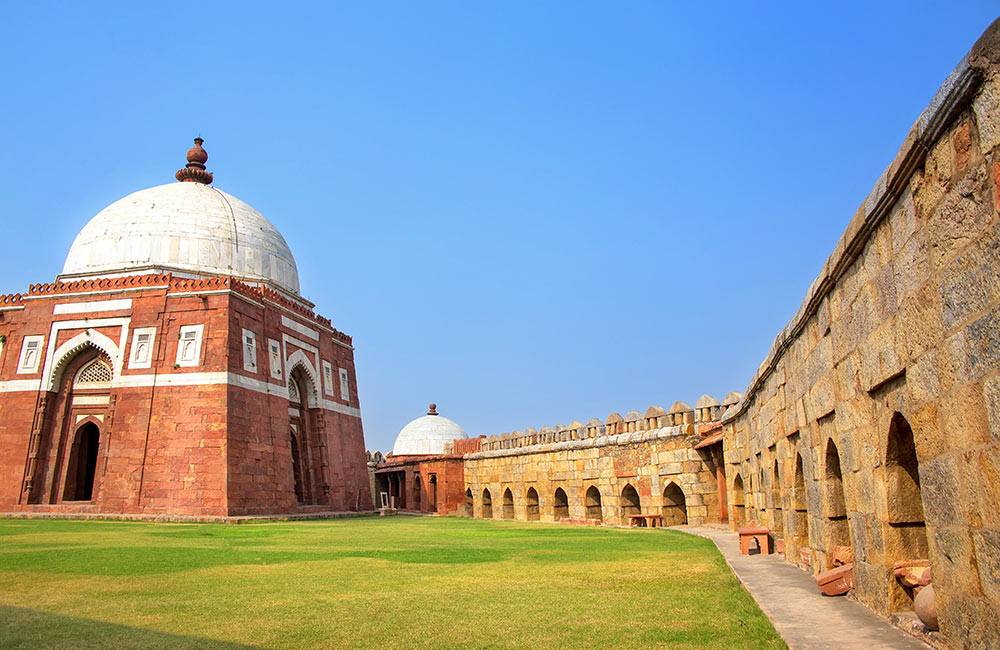 Tughlaqabad Fort | #1 of 9 Forts near Noida

Extremely popular amongst history enthusiasts and shutterbugs, Tughlaqabad Fort is one of the most renowned examples of Islamic architecture and is the closest to Noida city. Built by Ghiyas-ud-din Tughlaq, this fort is reminiscent of the troubled past as well as the terror and valour of that time.

Legend has it that Tughlaqabad Fort was cursed by Saint Sheikh Nizamuddin Auliya and has always remained deserted. Although the 14th-century structure is in ruins, it attracts visitors for the tomb of Ghiyas-ud-din Tughlaq, which was built in Indo-Islamic architectural style by the ruler himself. There are many underground passages to tombs and ancient wells within the fortified premises. 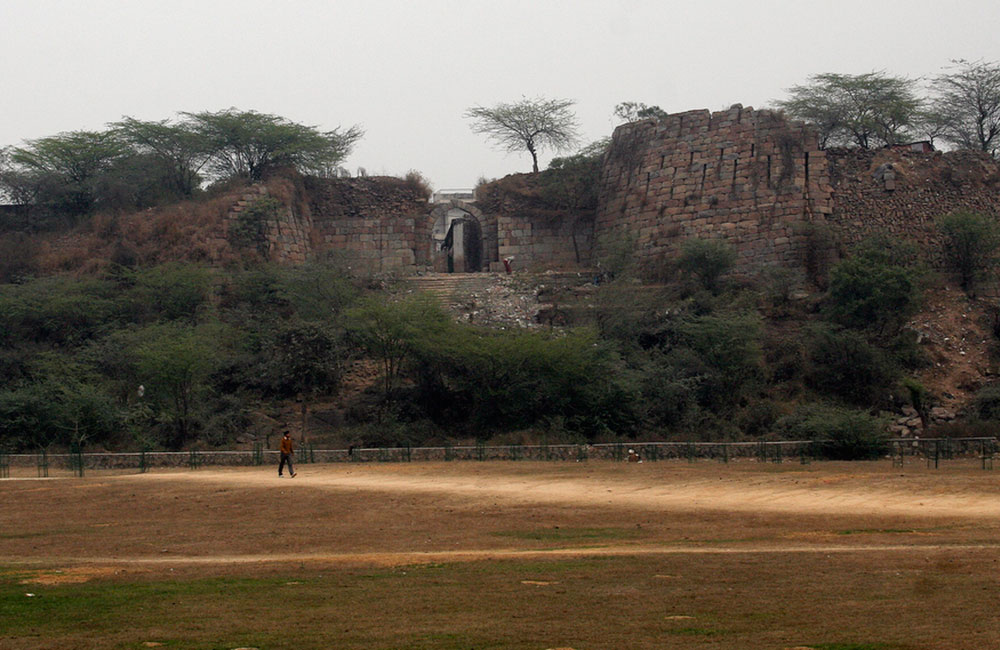 One of the least known historical structures near Noida is Nai Ka Kot, mostly in ruins today. It was built by Ghiyas-ud-din Tughlaq using enormous stone blocks. With its circumference stretching up to 6.5 km, it is believed that the enormous fortress was probably the largest in Delhi once.

The massive wall encompasses a palace, a citadel and many residential quarters. It also has a tomb with white marble and grey quartzite inlay, marble latticework, crenelated arches, battlement and a mihrab. The colossal structure of the fort with remarkably plain interiors reflects a sense of power as well as subdued splendour.

Adilabad Fort | #3 of 9 Forts near Noida

Situated in the south-eastern part of Tughlaqabad, Adilabad Fort is another lesser known monument in Delhi. It was built by Muhammed Bin Tughlaq, son of Ghiyas-ud-din Tughlaq, as an imitation of the Tughlaqabad Fort. However, this fort with sloping walls, crenulations and corbelled archway is not as grand as the original in terms of architecture and is in fact much smaller in dimension too.

As per historians, this 14th-century fort is the 4th fort to be constructed in Delhi. This legacy of Tughlaq dynasty is in ruins at the moment, but the basic structure has survived the wrath of time. It is famous for its Palace of a Thousand Pillars, also known as Qasrr-i-Hazaar Satun. 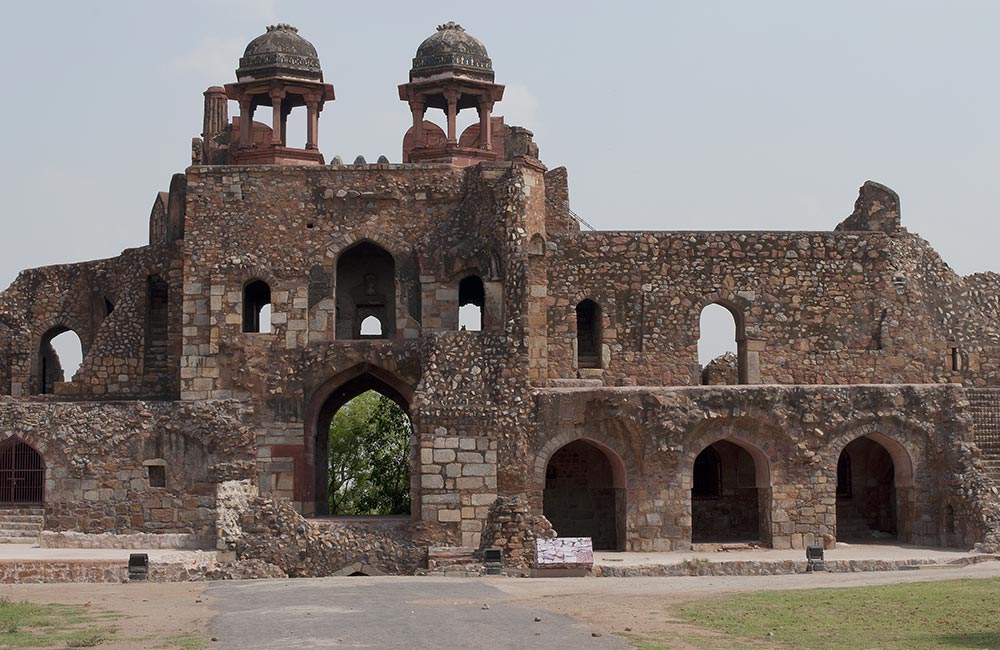 The Old Fort near Noida, also known as Purana Qila, is a 16th-century stone fort associated with many legends. It is believed that an Indrapat named hamlet existed on the same site, and that Humayun’s capital Din Panah was located here as well. The Afghan ruler Sher Shah Suri renovated the fort and renamed it Shergarh. He is also credited for building the current structure of the fort. Furthermore, the last Hindu ruler Samrat Hem Chandra Vikramaditya’s coronation was done on this site. 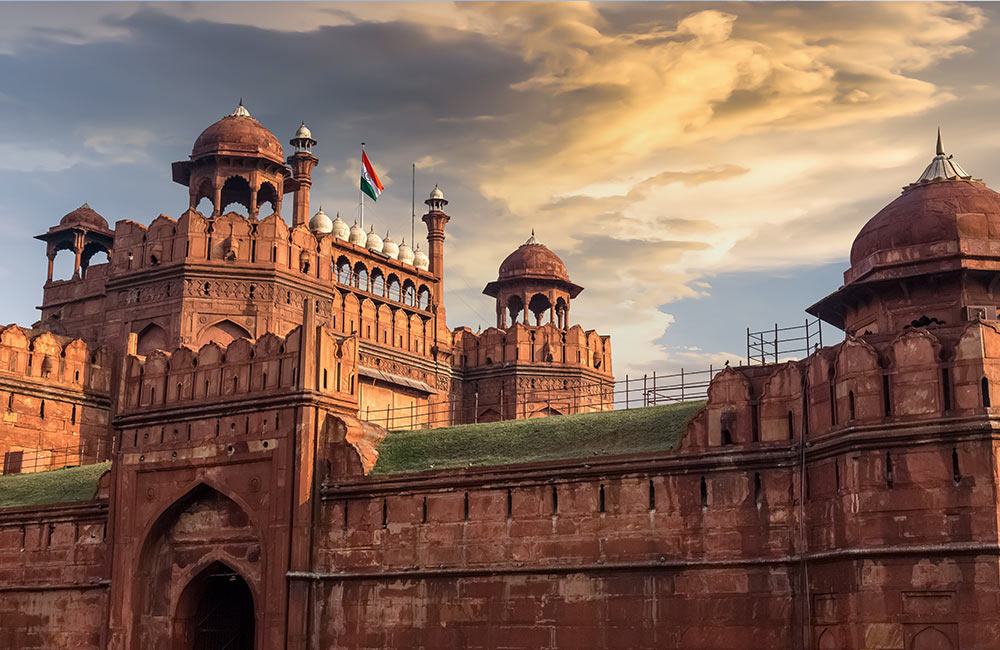 Perhaps the most popular fort near Noida is the Red Fort or Lal Qila, which derives its name from its enclosing red sandstone walls. This UNESCO World Heritage Site was built by the Mughal Emperor Shah Jahan in the 17th century as part of his palace fort of Shahjahanabad. The fort was earlier known as Qila-e-Mubarak or the Blessed Fort.

An amalgamation of Islamic, Persian, Timurid and Hindu architecture styles, this octagonally shaped fort encloses many beautiful structures, including the Diwan-i-Am, Diwan-i-Khas and arcades of Chatta Chowk. This fort is also a symbol of national pride as this is where Indian independence was first declared and ever since, the Prime Minister hoists the national flag here on Independence Day every year. 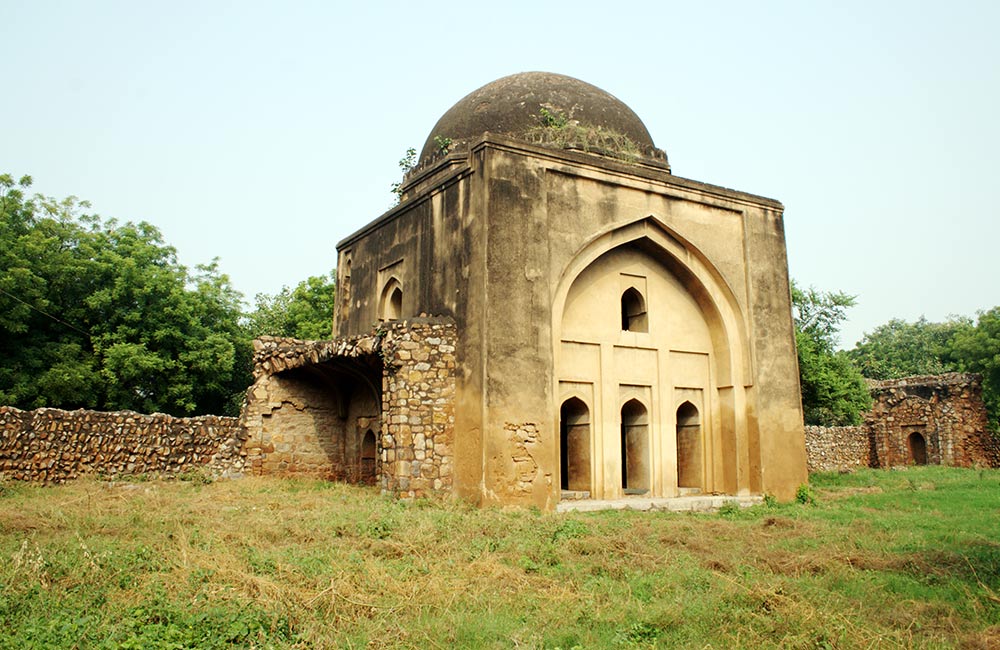 Siri Fort is probably one of the most renowned historical and cultural landmarks near Noida. It was built by Alauddin Khilji as part of the strategic city of Siri, the second dynasty of Delhi Sultanate. The main purpose of its construction was defence against Mongols. If legends are to be believed, around 8000 Mongol soldiers were buried in Siri after Khilji’s victory in 1306.

During the rule of the Seljuk dynasty, many additions were done to Khilji’s construction and hence, visitors can catch a glimpse of their impressive craftsmanship. The remains of the fortification still have a certain appeal that attracts history lovers from everywhere. 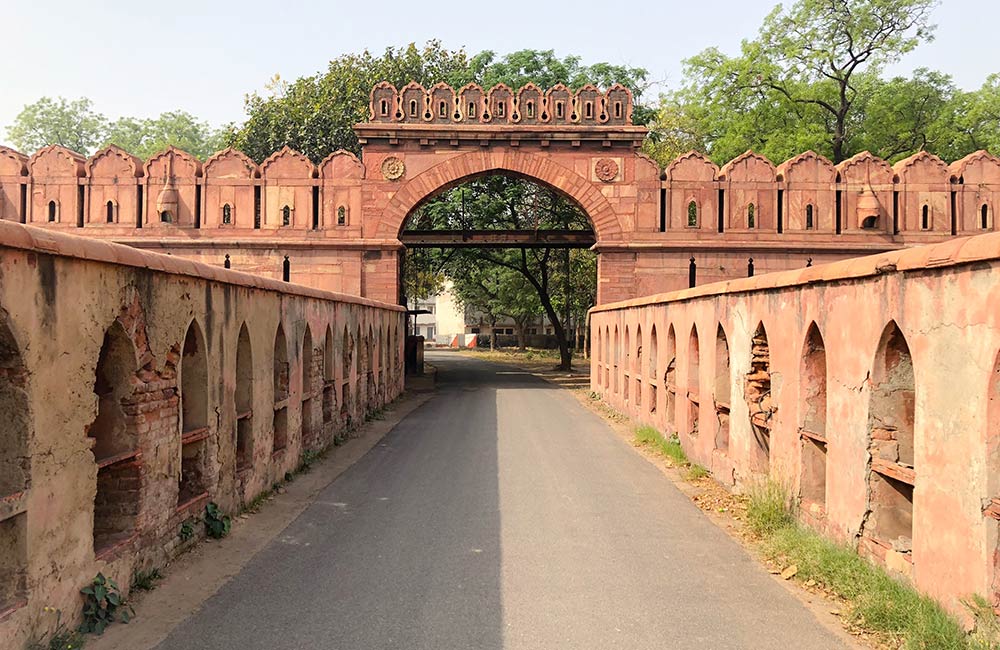 Salimgarh Fort | #7 of 9 Forts near Noida

Salimgarh Fort was built in 1546 by Islam Shah Suri, on an island on River Yamuna that does not exist any longer. The northern entrance of the present-day landlocked fort was built by the last Mughal Emperor Bahadur Shah Zafar in 1854. Later, many Mughal rulers camped at the fort, and Aurangzeb converted it into a state prison, where he kept Princess Zebunissa captive.

During the British rule, the fort was used as an artillery cache and fatal prison where several Indian freedom fighters were incarcerated in 1945. Mostly in ruins, the Salimgarh Fort, with its lofty bastions and towering citadels, has been renamed Swatantra Senani Smarak in the memory of the sacrifice of the imprisoned soldiers of Indian National Army. 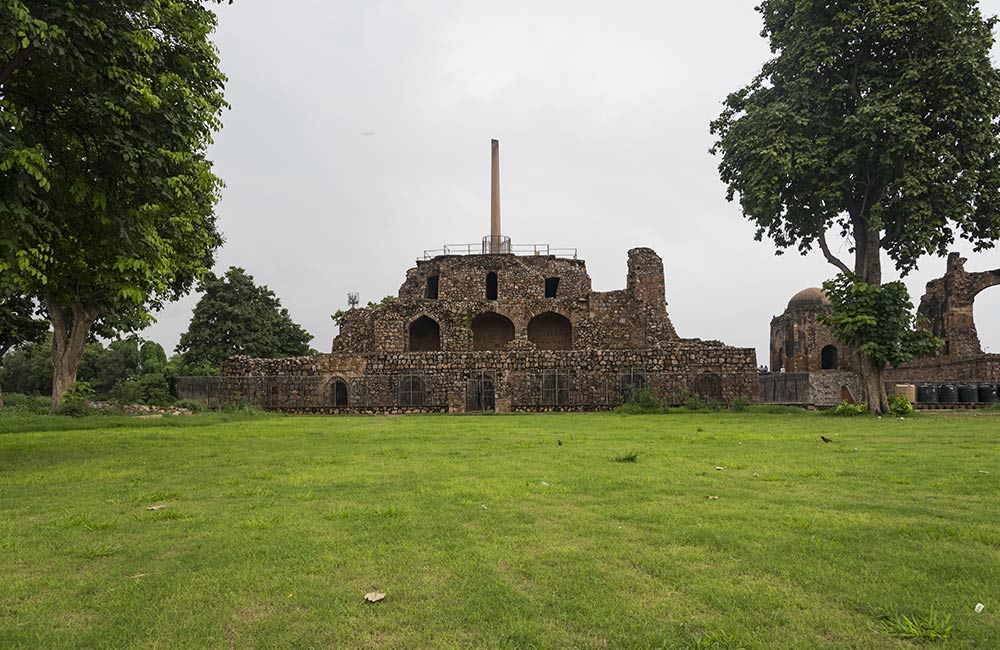 After Tughlaqabad and Adilabad, Ferozabad, also called Feroz Shah Kotla, was built by Feroz Shah Tughlaq in 1354. This 14th-century fortress was the fifth city of Delhi Sultanate but the first one to be built on the riverbank to overcome the persistent water problem. Although in ruins at present, visitors can catch glimpses of the crumbling walls of the mosque, step well and the extremely popular Ashoka Pillar.

Synonymous with Feroz Shah Kotla, the Ashoka Pillar is a 13-metre tall sandstone pillar with inscriptions including 3rd-century Buddhist relics. A three-storey pyramid-like structure, the Hawa Mahal, was built to mount the pillar and is the main attraction of this fort. 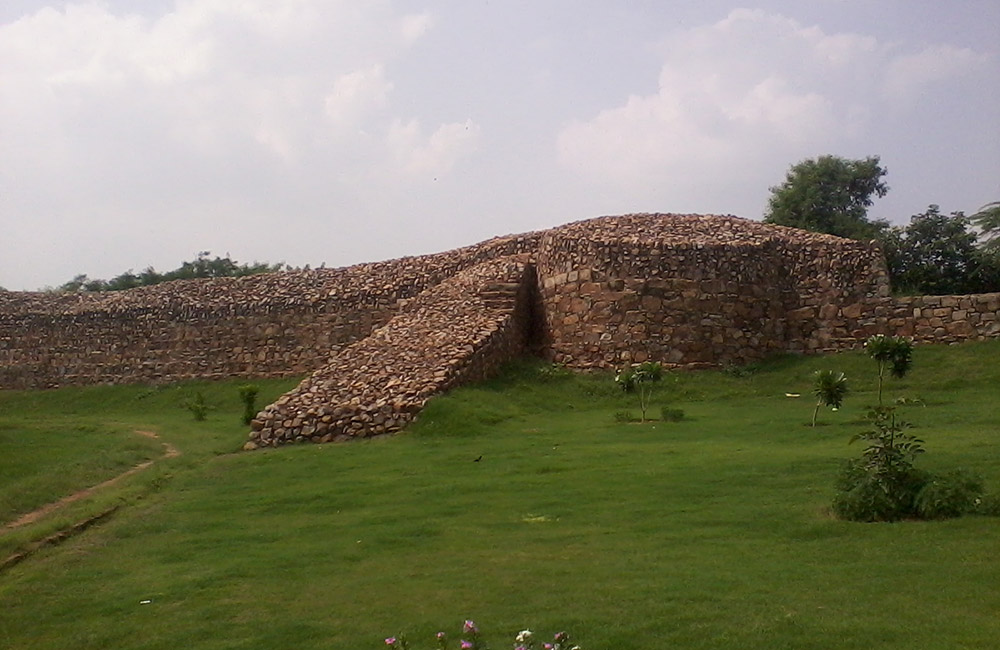 Popularly referred to as the first Red Fort of Delhi, Lal Kot was built under the reign of Raja Anangpal Tomar. It is believed that he laid the foundation of Delhi in 736 AD because of the strategic and military advantage that the rocky Aravalli hills in Mehrauli offered. Over the decades, several changes were made in the region with more fortification done to protect against invaders.

After the Tomar Rajputs were defeated by Prithviraj Chauhan, he extended the 8th-century Lal Kot to create the more famous Qila Rai Pithora. Parts of moat, bastions stone ramparts and gates, including Badaun, Barka, Fateh, Hauz Rani, Ranjit, and Sohan of Qila Rai Pithora are the main attractions here.

Besides these historical forts, there are many other amazing places to visit in Noida that will surely make your stay in the city memorable and fun.