11 Historical Places in Udaipur to Discover Past Glory of Rajasthan

The famous City of Lakes is an ideal destination to tour with your family or friends. Udaipur is as popular for its lively markets, revered temples and palatial buildings as its scenic lakes – Pichola, Fateh Sagar and Jaisamand. Once home to the valorous Mewar dynasty, Udaipur boasts of rich history, culture and traditions. When you plan a trip to this amazing city of Rajasthan, be ready to venture out of your hotels in Udaipur to discover and delve into its glorious past. And the best way to do that is to visit all the important places in the city that are of historical significance.

Here is a list of historical places in Udaipur that you must visit:

Jagdish Temple, built in 1651, is one of the best historical places to visit in Udaipur. Dedicated to Lord Vishnu, this temple was commissioned by Maharana Jagat Singh, who ruled the region from 1628 till 1653. This three-storied shrine features Indo-Aryan architecture with finely decorated ceilings and beautifully carved pillars. Its 24 m high spire displays intricately-sculpted images of musicians, elephants, dancers and horsemen.

Interestingly, the idol of the presiding deity housed in the sanctum sanctorum has been carved out from a sole piece of black stone. Besides, four smaller temples dedicated to Lord Shiva, Lord Ganesha, Goddess Shakti and the Sun God are also present on the temple premises. A visit to this religious place will bring good luck to your Udaipur trip and yes, lots of amazing memories too! 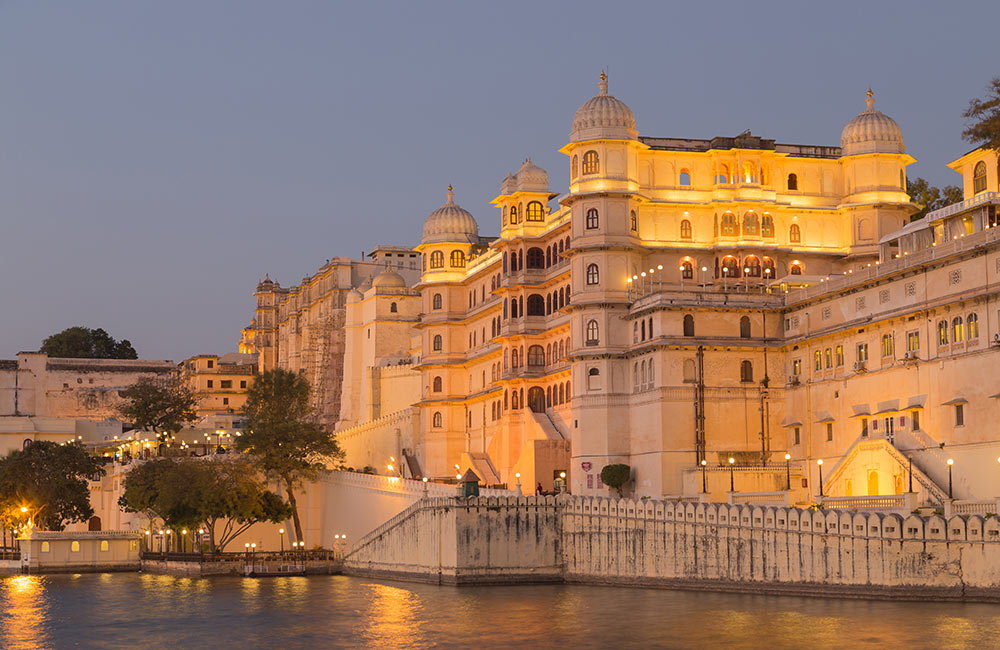 The spectacular City Palace holds great historical importance as it once served as the administrative complex of the Maharanas of Udaipur. The construction of this beautiful palace was commissioned by Maharana Udai Singh II, and it was built for over 400 years by his successors. Standing tall in marble and granite, this building features a blend of Chinese, Medieval and European architectural styles.

The entire complex has 11 small palaces and several other wonderful structures. The view of the exteriors of the palace will certainly delight you, and so would the interiors that feature intricate marble-work, inlay-work, mirror-work and wall paintings. Situated at an elevation of around 598 m above sea level, the palace complex also offers the most stunning views of the picturesque Lake Pichola. 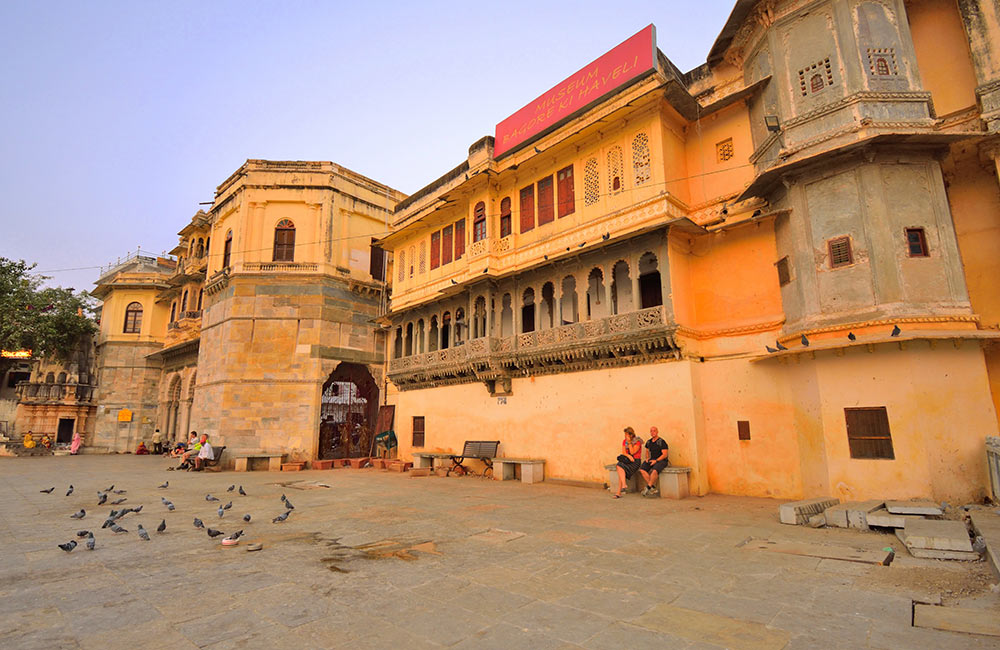 One of the best tourist places in Udaipur is Bagore ki Haveli, which was built by Amarchand Badwa – the Prime Minister of the kingdom of Mewar between 1751 and 1778. After his demise, this place was taken over by the royal family of Mewar. A triple-arched gateway was added to this building in 1878 under the rule of Maharaja Shakti Singh and since then, it has been famous as Bagore ki Haveli. It remained in the possession of the Mewar kingdom until 1947, when it came under the supervision of the Rajasthan State Government.

There are about 138 rooms on the premises, each featuring splendid mirror and glass work as well as stunning mural paintings. The courtyards, archways, fountain, balconies and the ‘jharokhas’ here are simply fascinating. Also, the folk dance performances organized on the premises are sure to leave you spellbound! 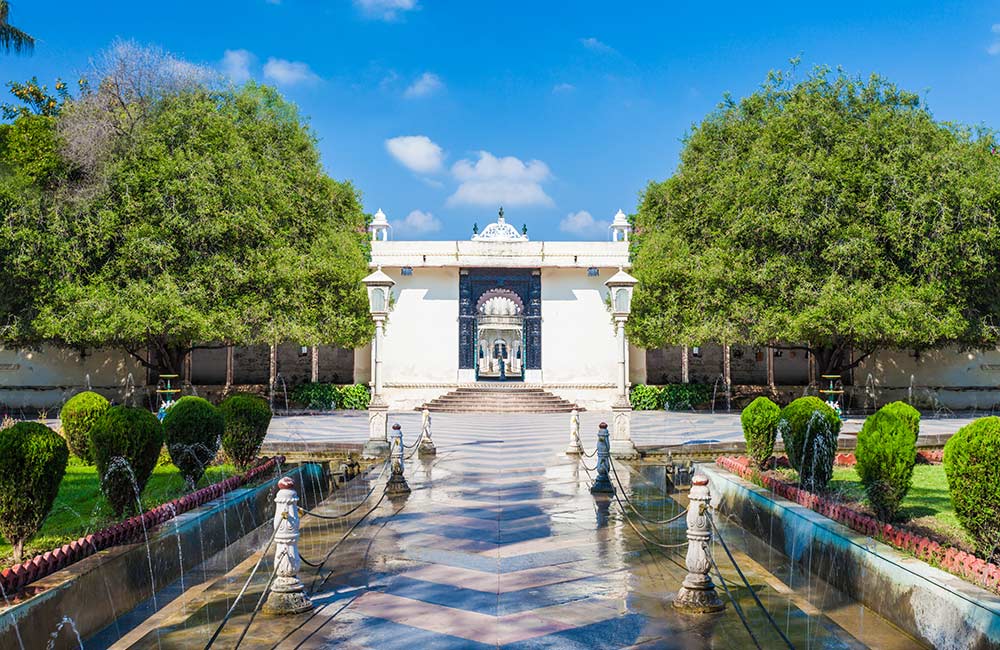 Built in the 18th century by Maharana Sangram Singh, Saheliyon ki Bari (or the Garden of the Maidens) is well-known for its beautiful fountains, lush lawns and marble structures. According to legends, the king himself had designed the plan of this garden for his beloved queen and the 48 maidens who accompanied her in marriage.

Located on the banks of the Fateh Sagar Lake, this garden also houses a museum that has a collection of royal items. Evenings are the best time to come to this garden as the sounds of the chirping birds, the water flowing through its canals and the dying rays of the sun make sure that you have a pleasant experience here. 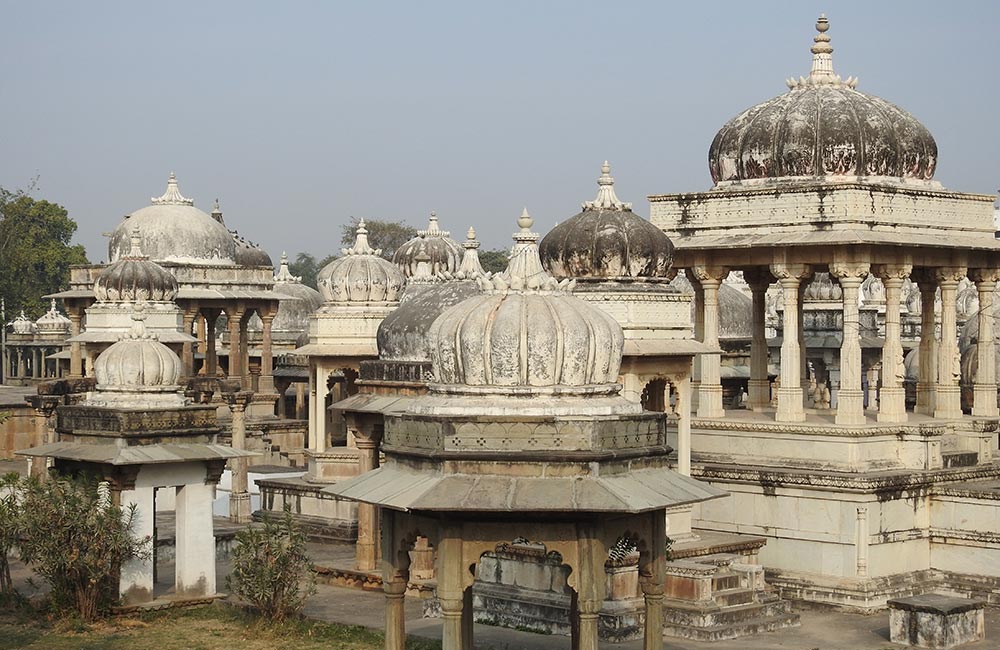 The small town of Ahar is renowned for housing the cenotaphs of the great rulers and queens of the Mewar kingdom. As many as 372 such monuments have been built here over 400 years; the last one being that of the city’s last Maharana, Bhagwat Singh. Each of the cenotaphs has striking features and looks more like temples belonging to the 15th century owing to the intricate craftsmanship and detailed motifs.

Once you are done exploring this place, head to the nearby Government Museum to witness some really old objects and sculptures, which are believed to date from over 3300 years ago. 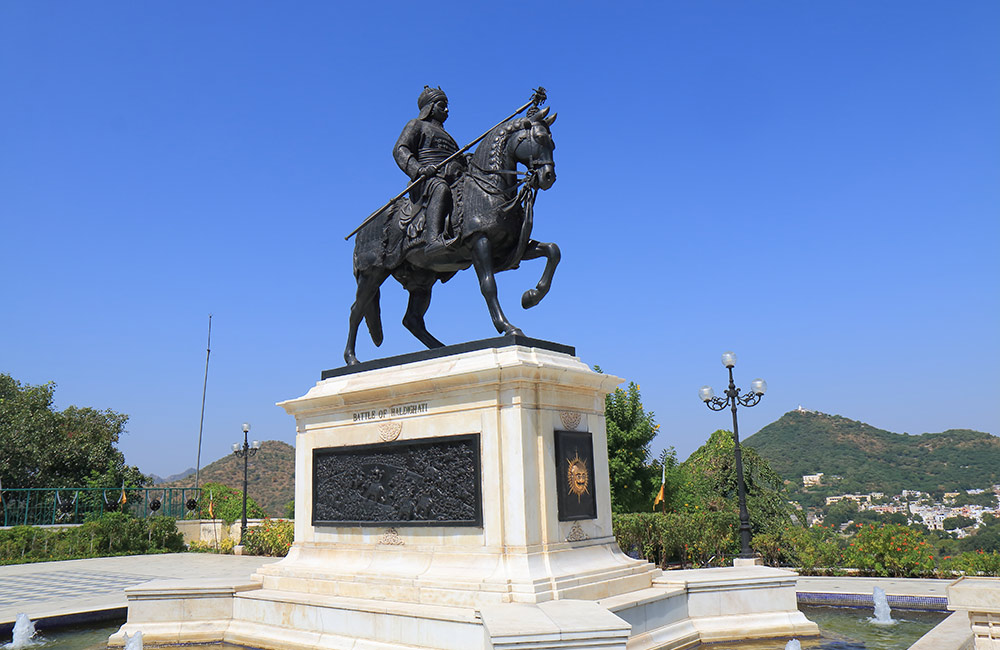 As you stroll across the lush green hill of Moti Magri clicking pictures of the memorial, head to the Japanese Rock Garden situated nearby and spend some time there. If you are there at the time of sunset, then the view of Fateh Sagar Lake at that juncture should definitely offer you a serene experience. 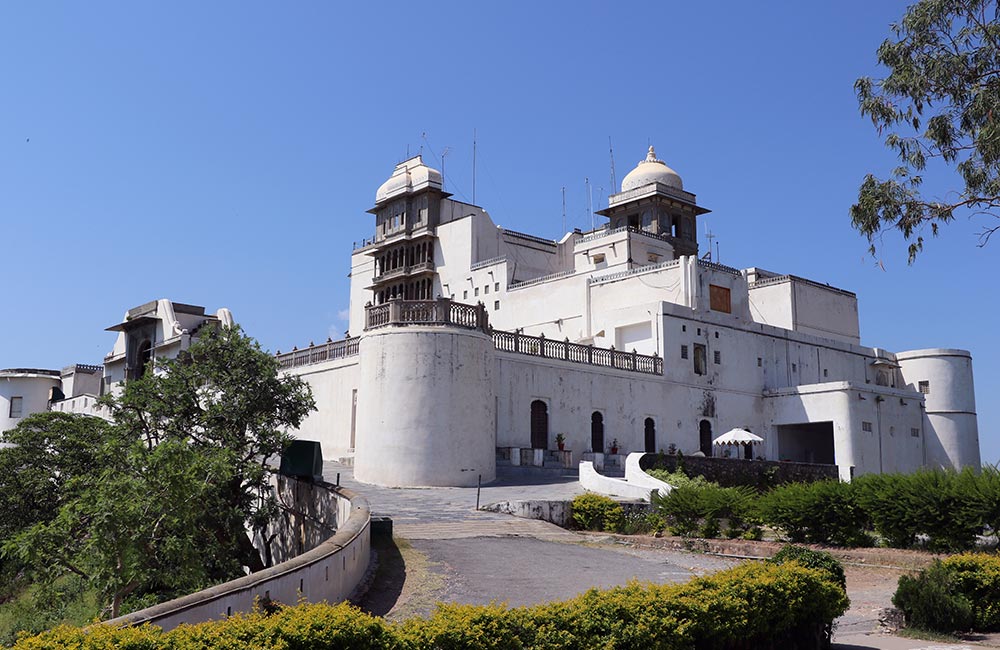 The 19th-century Sajjangarh Palace is one of the most prominent historical places in the city of Udaipur. Built by Maharana Sajjan Singh in 1884, this palace was initially used as an astronomical centre but later, it was also used as a hunting lodge and monsoon palace. This white marble edifice is perched at an elevation of around 944 m on Banasdara Hill and comprises a beautiful bronze statue of Maharana Pratap, a grand central court, fountains and royal quarters featuring intricately decorated jharokhas.

The best time to witness the glory of this palace is during monsoons. Located at the foot of the Banasdara Hill is the Sajjangarh Wildlife Sanctuary, which is abundant in flora and fauna and can be visited with the palace. 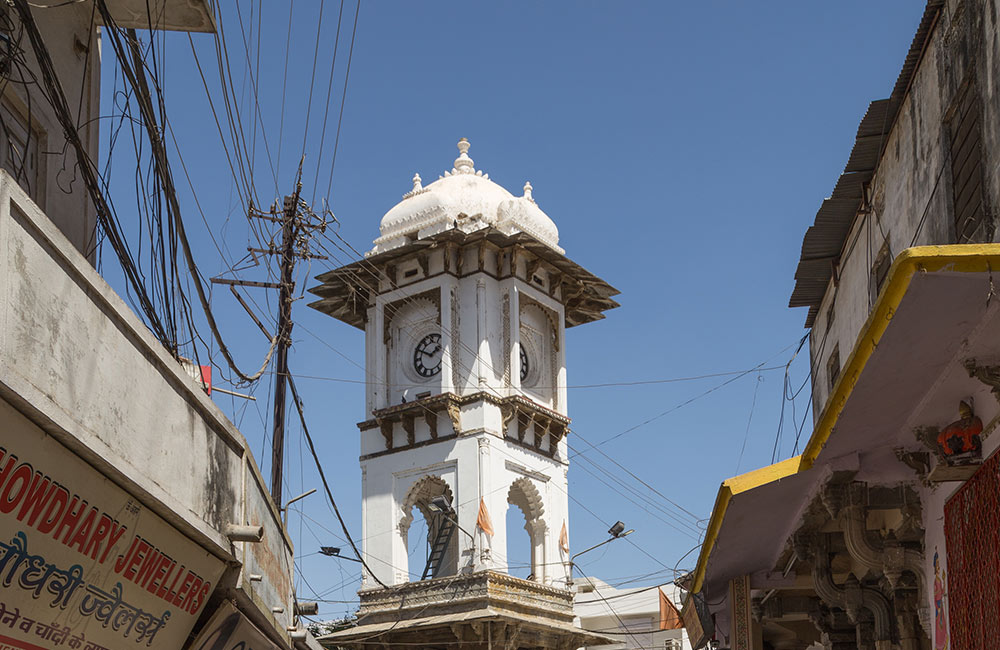 Built about 130 years back, Ghanta Ghar is the first public clock of the city that has an interesting history. The tale goes that there was a huge conflict between the Muslim community of Bohras and the Hindu community of Mahajans over a trivial issue. As a punishment for this conflict, each of these communities was fined with INR 5000 by Rai Pannalal Mehta – the then Pradhan of the Mewar state. He then convinced Maharana Fateh Singh to get a clock tower erected at the same place where the conflict began as a symbol of peace.

The 50 feet clock tower that we see today was brought from London and today is considered to be among the most popular historical attractions of Udaipur. 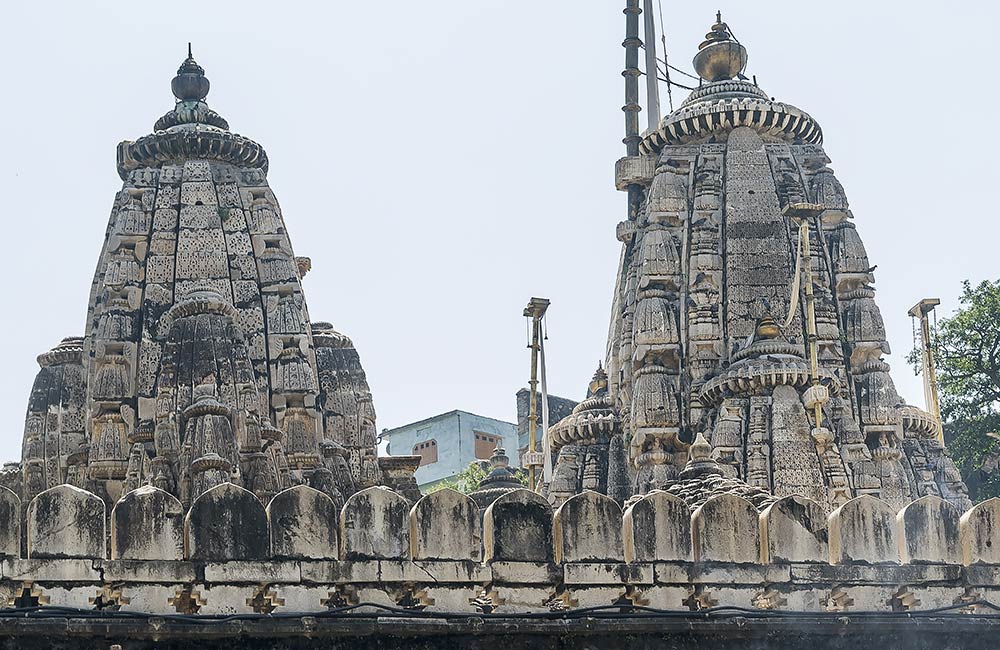 Built in the 8th century by Bappa Rawal, the Eklingji Temple is dedicated to Lord Shiva, whom the Mewar rulers venerated. It was under the attack of the Mughals at one point in time; however, it was repaired and brought back to its original state by the Mewar rulers.

Featuring a pyramid-style top with a carved tower, this double-storied structure has a mandapa that houses a silver image of Nandi along with other two made of brass and black stone. The main attraction of the temple is the beautiful 50 feet marble idol of Lord Shiva or Eklingji that has four faces depicting his four forms. Paying a visit to this site is a must as it counts among the top 10 temples in Udaipur! 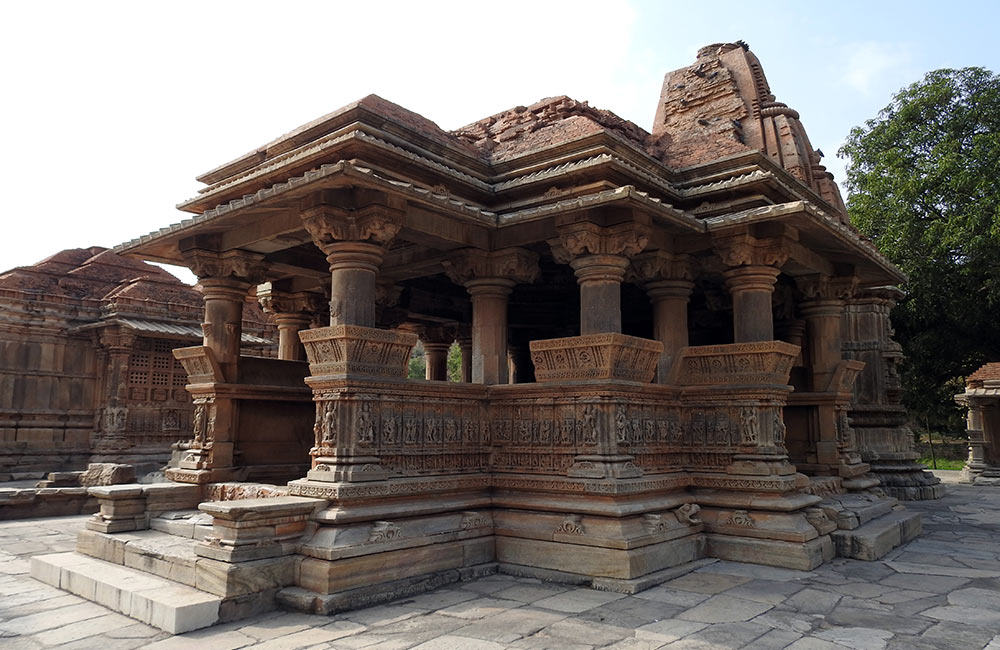 The 10th-century Saas Bahu Temple is a revered place of worship located on the outskirts of the city, en route to Eklingji Temple. Contrary to the name, this temple was commissioned by King Mahipala for his beloved who was an ardent devotee of Lord Vishnu. Later, another temple was built beside it by his son for his wife – a Lord Shiva worshipper. Initially, the two shrines were together called Sahastrabahu Temple but over the years, this name got corrupted and the site became famous as Saas Bahu Temple.

The larger of the two, the Saas Temple has an archway and its walls have intricate carvings depicting incidents from the Ramayana. There are images of Lord Brahma, Shiva and Vishnu on one platform while the other has Parshurama, Rama and Balrama carved on it. 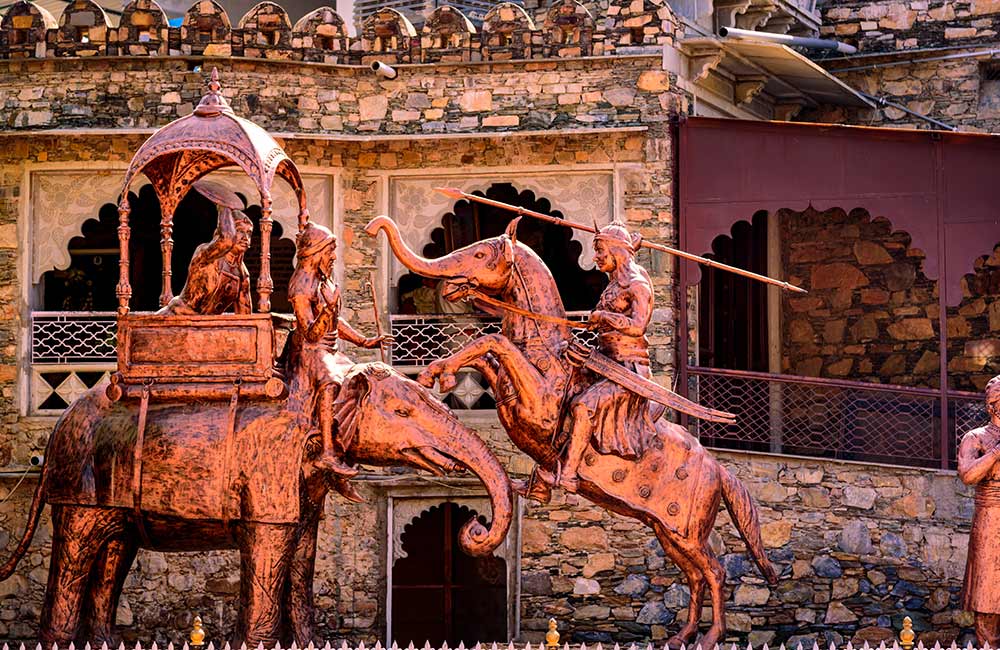 The mountain pass of Haldighati, which connects the districts of Pali and Rajsamand, marks the site where the famous battle of 1576 was fought between the king of Amber Raja Man Singh and Rana Pratap Sing of Mewar; the former being the Emperor Akbar’s general. This is the battle where king Maharana Pratap and his horse, Chetak lost their lives and went into the history books forever!

This mountain pass is a part of the Aravalli mountains and is named Haldighati because of the yellow color of its soil, which looks just like turmeric.

After taking a trip through time and exploring the city’s historical attractions, you can head to any of the pubs and lounges to catch a break from all the sightseeing and enjoy a taste of the nightlife in Udaipur.