Monuments are not just architectural marvels that depict the artistry and the architectural brilliance of the olden days, these are also a testimony to a city’s (or a country’s) glorious past. One such city that boasts several monuments of historical significance is Mumbai, aka ‘Aamchi Mumbai’ (as the locals love to call it). These structures that have stood tall and proud through different eras are an ode to the legacy of Mumbai’s rich history. So, if you are a history buff (or even if you are not) here are a few monuments that you must visit for a peek into this magnificent city’s past. Let’s take a look at the best places in Mumbai to visit on a trip.

Chhatrapati Shivaji, formerly known as Victoria Terminus, is a truly historic railway station, located in the South Mumbai area. The significance of this historical building is evident from the fact that in July 2004, UNESCO declared it as a World Heritage Site. No wonder, it is one of the most clicked monuments in India. In fact, the second most photographed Indian monument, with Taj Mahal being the first (as per numerous accounts).

One of the major historical places in Mumbai, Chhatrapati Shivaji Terminus railway station was designed by British architect, Frederick William Stevens. Built in the late 1800s to commemorate the Golden Jubilee of Queen Victoria, the railway station was named Victoria Terminus in her honour.

The building designed in the High Victorian Gothic style of architecture also exhibits influences of the classical Indian architecture. In terms of engineering, the CST railway station is a testimony to the level of sophistication that the British engineers had achieved around a decade and a half ago.

2. The ‘Iconic’ Gateway of India, Mumbai 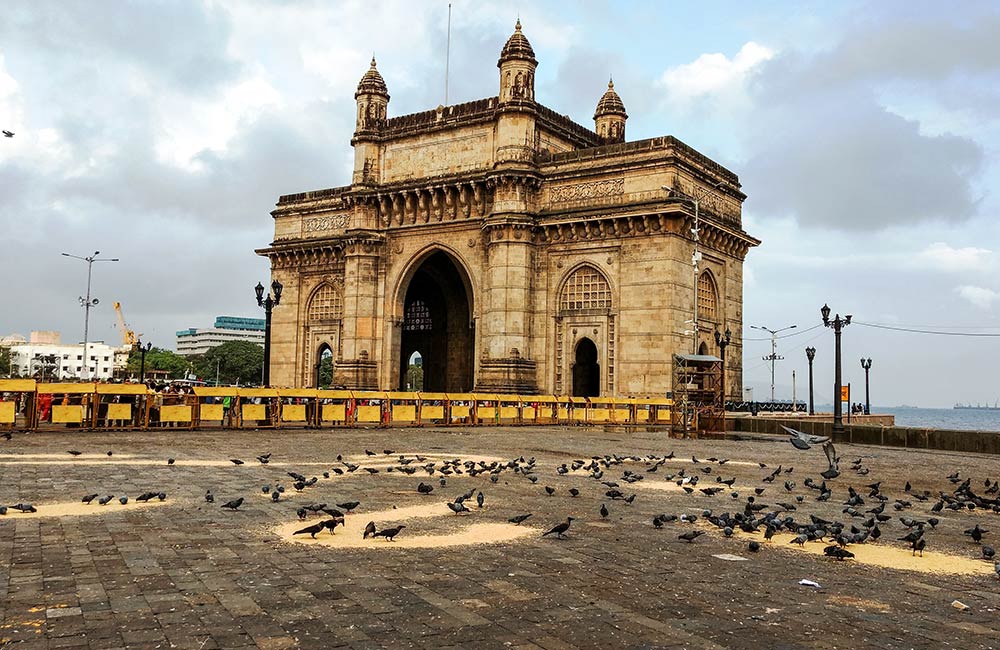 Built to commemorate the visit of King George V and Queen Mary to India in 1911, the Gateway of India is one of the most iconic monuments of Mumbai. Surprisingly though, the foundation of the building was laid in 1911, it was three years later, in 1914, that the design of the monument was finally sanctioned. It then took another ten years to build this historical monument.

Ironically, the monument that was the gateway to India for the British King and Queen, later went on to become the exit point of the British from India. On February the 28th of 1948, the British troops embarked on their voyage home from the Gateway of India, thus marking the end of British rule in India.

Mani Bhavan was home to the Mahatma during his 17-year stay in Mumbai, from 1917 to 1934. It was this place, from where Mahatma Gandhi conceptualised and launched some of the most disruptive freedom movements against the British Raj in India, including Satyagraha, Swadeshi Movement and Civil Disobedience Movement.

Today, it serves as a memorial to Mahatma Gandhi and all things Gandhian. If you happen to visit this place, you will first enter a library that houses a statue of the Mahatma. As you take the stairs from the library to the photo gallery on the first floor, you will see some of the rarest photos of Mahatma Gandhi, that depict his life right from his childhood to his assassination. Besides seeing Gandhiji’s pictures, you can also hear his speeches, read his letters and see his personal belongings at the iconic Mani Bhavan.

India’s first 5-star hotel, the Taj Mahal hotel, commissioned by Sir Jamshedji Tata, opened on December 16, 1903. Since then, the hotel has hosted several dignitaries and eminent personalities from all parts of the world. Some of the most notable names being Lord Mountbatten, Rattanbai Petit, the second wife of Muhammad Ali Jinnah, Sarojini Naidu, Jazz legend Micky Correa, former US President Bill Clinton and his wife Hillary Clinton, another former US President Barack Obama, and Prince William and his wife Kate Middleton.

There are several stories around why the hotel was built. According to one of the stories, Sir Jamshedji Tata decided to build the hotel because he was once denied entry into the Watson’s Hotel, one of the grandest hotels in Mumbai during that time, as it was restricted to whites only. Many historians, however, shun the story saying that a man of his stature would hardly be affected by petty issues like that. They suggest that it was his love for Mumbai, and the insistence of the editor of The Times of India that motivated him to build the hotel.

Taj Mahal Palace, the flagship property of the Taj Hotels Resorts and Palaces, was designed by Indian architects, DN Mirza and Sitaram Khanderao Vaidya. The builder, too, was an Indian – Khansaheb Sorabji Ruttonji Contractor.

Built by Deubai Patil and Laxman Vithu in 1801, Siddhivinayak Temple is a Hindu shrine dedicated to Lord Ganesha. When the temple was first built, it was a small, tiny place of worship, the actual size being 3.6 m x 3.6 m. It was only during the latter half of the 20th century that the temple evolved into the grand temple that you see today.

The 200-year-old Siddhivinayak Temple is one of the richest in Mumbai, receiving donations of around ₹ 100 million to ₹ 150 million every year. It was during the 1950s and 1960s that the temple first started witnessing a surge in the number of devotees. And, it was around the second half of the 1970s that the devotees surged dramatically. Today, the number of devotees visiting the temple is around 25000 per day. People from all parts of the countries come to Siddhivinayak Temple to seek blessings of Lord Ganesha.

Now that you have read the blog this far, it should be safe to assume that you do have a history buff in you. So, the next time you are staying at hotels in Mumbai, let that history buff in you travel back in time and explore the glorious past the city has to offer. And, just to let you know, the monuments mentioned in this post are just one of the many such places you can visit. Apart from those within the city, there are numerous historical places near Mumbai, such as the exquisitely carved Elephanta Caves that you ought t to visit.