11 Historical Places in and around Jaipur you must Visit

A trip to Jaipur, the crown jewel of India’s tourism sector, is always an immersive experience. Its grand monuments, royal tales, eclectic cuisine and the unbelievable warmth and hospitality of its people enthrall you, making you want to come back again and again. There’s so much to see and do in this historic city that one trip wouldn’t be enough anyway.  So, what are some of the top things to do in Jaipur for a first visit?

It’s obvious. Start with a tour of the historical places in Jaipur – its forts, palaces, temples and museums. You could also pack in a few of the lesser-known attractions in the city…intrigued? Don’t forget to book a hotel in Jaipur advance as in the main travel season, the prices can be exorbitantly high and availability quite low.

Read on to find out more about the best historical sites in Jaipur: 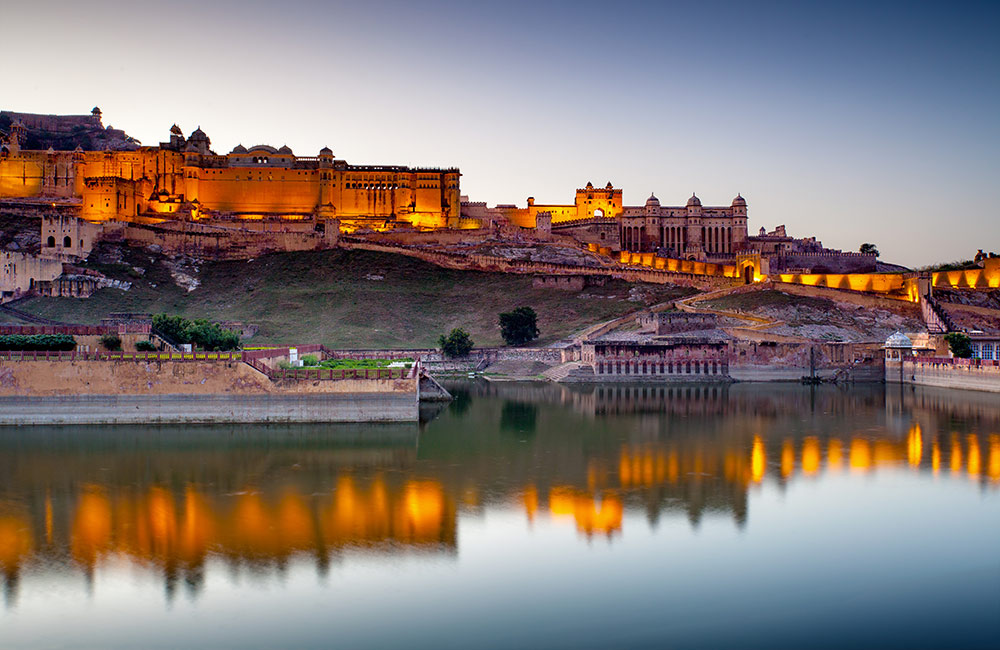 No other structure takes you back to Jaipur’s majestic past as impeccably as the sprawling, arresting Amer Fort. Constructed on the ruins of an old Amer settlement of the Meena kings, Amer Fort (alternatively ‘Amber’) is mired in history, stories of kings and queens, and astonishing architectural mastery. Made largely out of sandstone and marble, the fort consists of a series of courtyards constructed at different levels, stunning palaces like the illuminated Sheesh Mahal, historical temples like the Shila Devi shrine, halls adorned with frescoes, painted ceilings and marble inlay work, and ornamental gardens laid out in the Islamic charbagh style. The many architectural and storied vignettes in the palace fort will keep you in rapt attention for nearly a whole day. 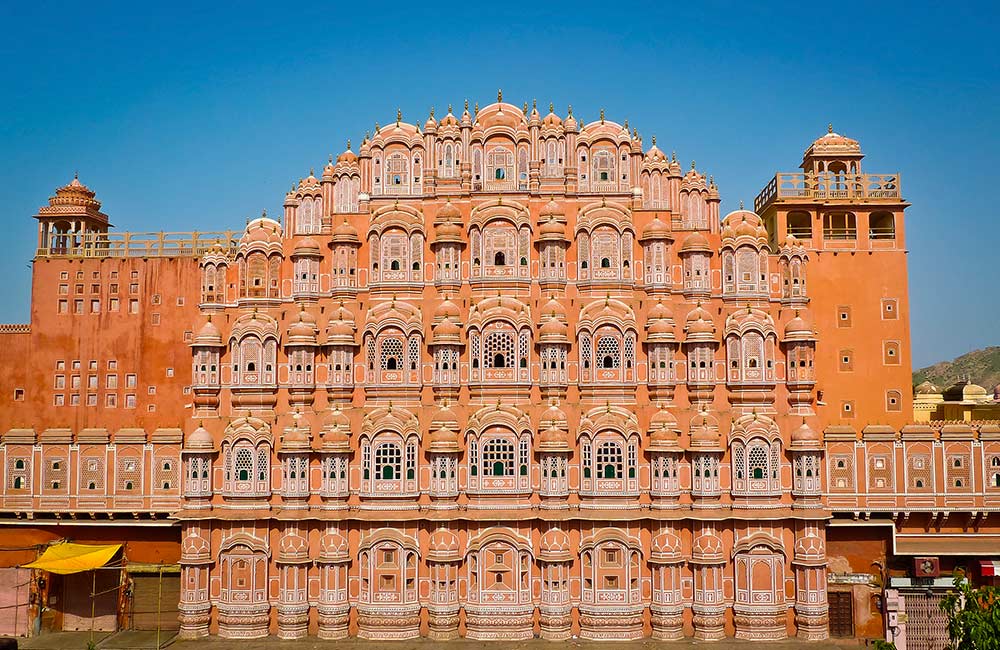 This 18th-century structure, situated on Badi Chaupad, is the most iconic image of Jaipur that every Indian and someone from outside the country has of the city. Constructed by Maharaja Sawai Pratap Singh in 1799, the building is actually a façade, built on the edge of the City Palace. Connected to the Zenana or the ladies’ quarters, this 5-storeyed latticed structure was meant to enable the royal ladies to view the daily life of the city, the parades and the royal processions while still staying in purdah. Reminiscent of a beehive, the Hawa Mahal, which means ‘palace of winds’ is punctuated with 953 windows or jharokhas, also acting as a conduit for pleasant breezes to pass into the living quarters. A definitive Jaipur monument, the pretty-in-pink Hawa Mahal must feature in your things to do in Jaipur list. 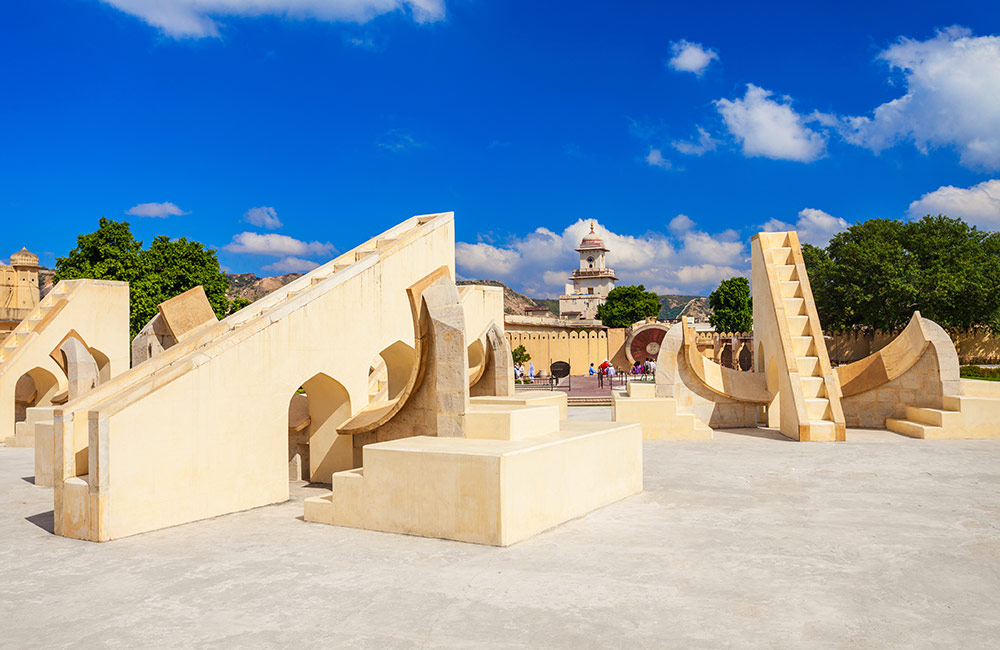 Unique among the UNESCO World Heritage Sites in Rajasthan that are mostly hill forts, Jantar Mantar is a monument of astronomical proportions. Literally! Because it is one of the largest pre-modern observatories in the world, used to map the sky, the movement of stars, planets and other celestial objects with the naked eye. It also features the largest stone sundial anywhere in the world. A collection of seemingly bizarre, colossal structures, Jantar Mantar was built by Maharaja Sawai Jai Singh II (the city of Jaipur that is named after him) between 1728 and 1734. The observatory, one of the most important historical places in Jaipur, comprises 20 fixed instruments like Chakra Yantra, Dhruva Darshak Pattika, and Samrat Yantra. Each one has been designed for measuring time, predicting celestial events like eclipses and tracking the movement of stars along with the collection of other technical data. Standing inside the Jantar Mantar (from Sanskrit Yantra Mantrana, meaning ‘instrument of calculation’) you will get a fair idea of how advanced Indian science really was all those years ago. 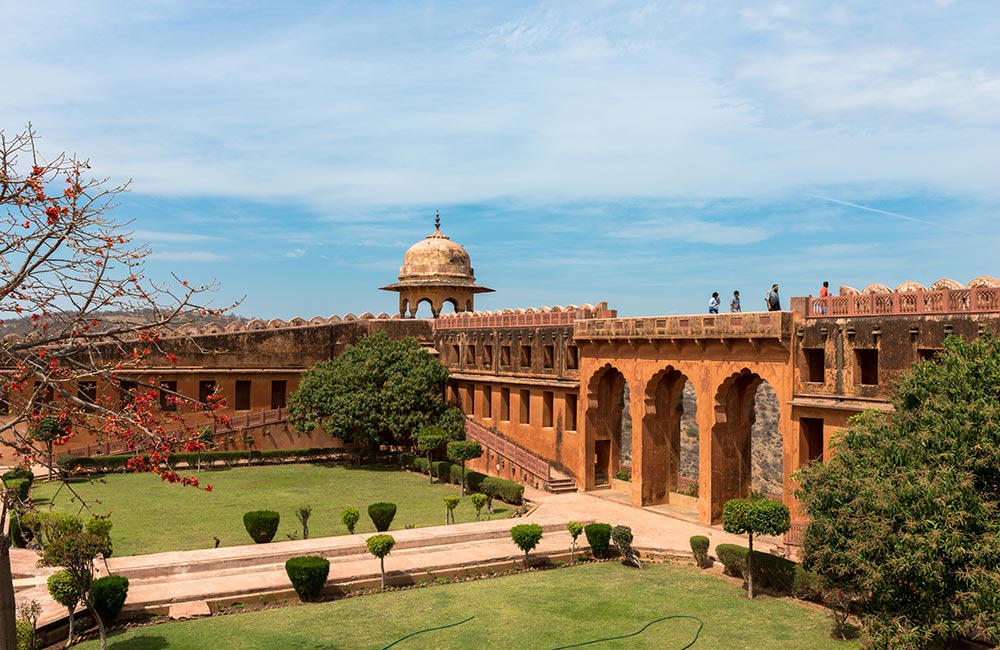 Does a fort built to protect another fort make sense? If you were living in Medieval India, then yes, it would have! This was a time of near-constant wars for the Rajputana, and no measure was light enough. And so, after Amer Fort was built, another one was constructed just about 400 meters above it to give it protection in times of need. The rugged Jaigarh Fort constructed in 1726 under the watchful eye of Maharaja Jai Singh II, included red sandstone walls that stretch to 3 km in length, ramparts on the corners, a mega canon foundry where the ‘Jaivana’, once considered one of the largest canons in the world, was cast, courtrooms, a giant watchtower and two shrines. One of the most intriguing features of the fort is the water tank on the premises, filled with rain-harvested water; it was rumored to be the secret hiding place for the royal Kachwaha treasures. A trip to Jaigarh Fort requires nearly a whole day because there’s so much to do and explore here. While here, don’t miss on a visit to Dilaram Bagh, the museum, armory and the Jaivana. 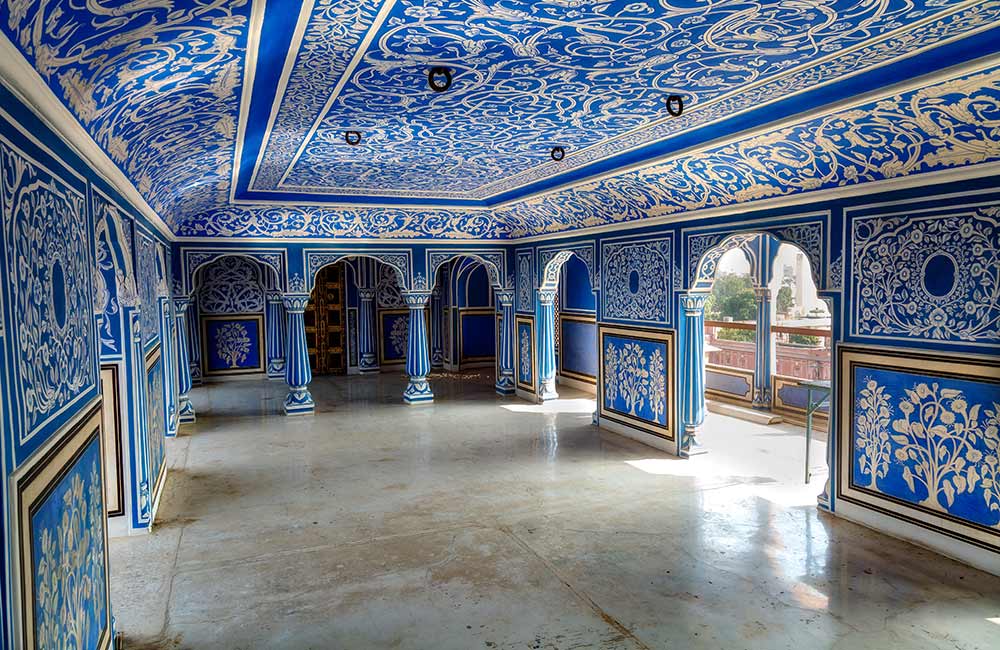 One of the most visited historical places in Jaipur, the City Palace is a riveting 18th-century structure. It is a palace complex, featuring beautiful buildings from different eras. The outer walls were built during the reign of Sawai Jai Singh II and additions were made by subsequent rulers leading up to the 20th century. A striking blend of Rajasthani and Mughal architectural styles, the City Palaces has several structures worth exploring – 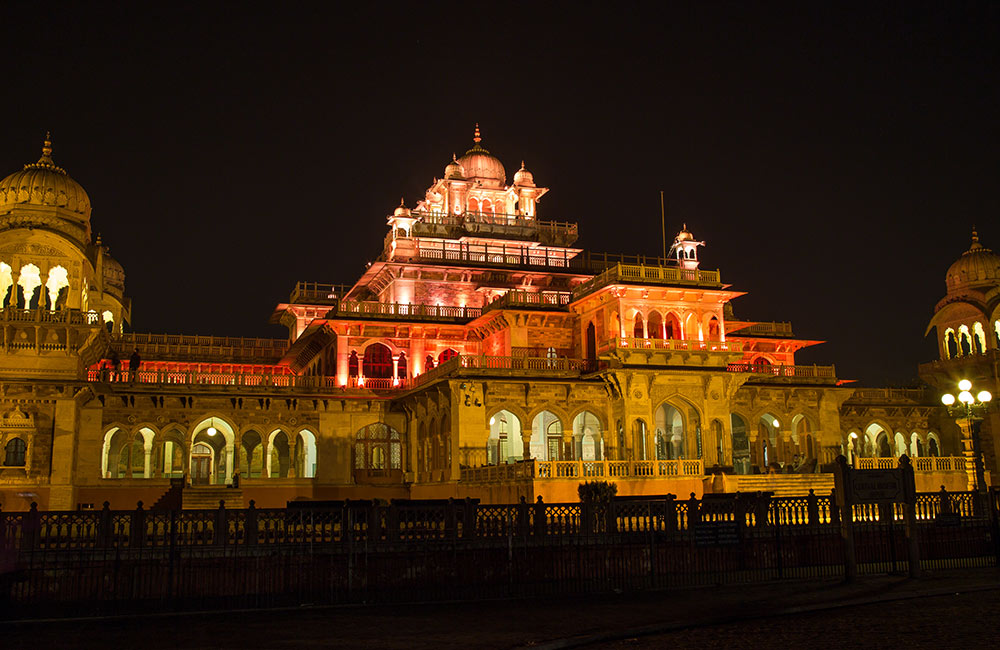 One of the oldest museums in Jaipur, the Albert Hall Museum attracts thousands of visitors each year, whom it captivated with its stunning collections as much as the flamboyant building that houses it. Built between 1876 and 1887 under the auspices of Maharaja Sawai Madho Singh II, this museum was designed by Sir Swinton Jacob, who combined elements of various European and Indian architectural styles. Adorned with grand friezes, painted murals and stone ornamentations, the museum building is an attraction in itself. Coming to its collection, it displays an imposing 4th-century sandstone sculpture of a Yakshi, vintage jewelry, dazzling miniature paintings, dioramas and much more. 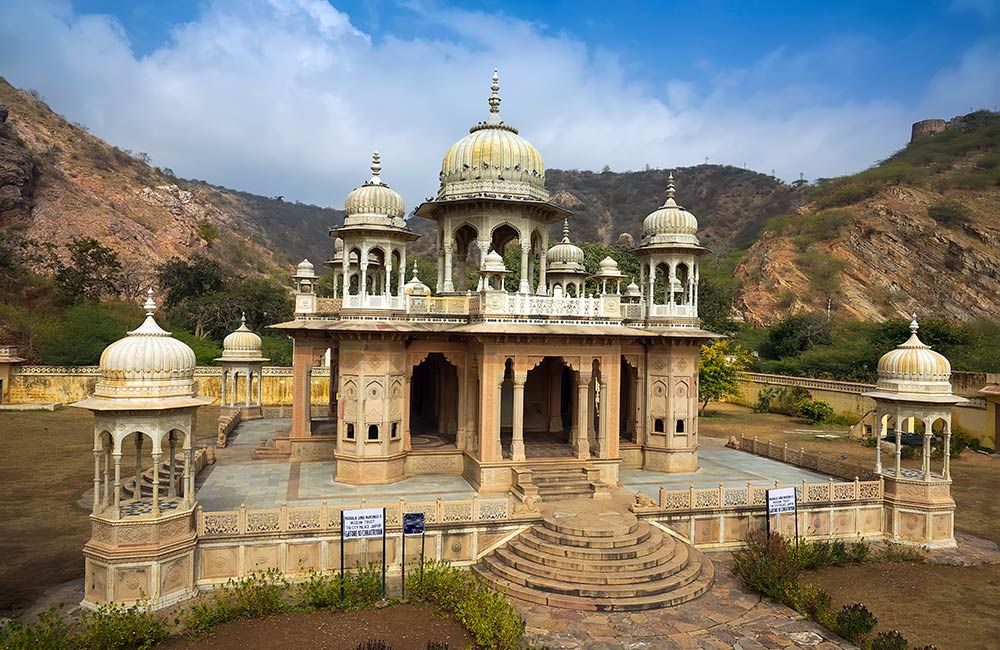 Royal Tombs in Gaitor | #7 of 11 Historical places in Jaipur

An oasis of calm in a sea of cacophony, the Gaitor (also spelled Gatore) is a complex of cenotaphs or tombs built to honor the kings and queens of the past. Located just outside the city walls just beneath Nahargarh Fort, these stone monuments boast intricate bas-relief, carved pillars, sculptures and latticework. Mostly undiscovered and largely off the tourist map, these are dedicated to  Madho Singh II, Pratap Singh and Jai Singh II, among many. Each cenotaph is built in a different style, representing the aesthetic elements prevalent in each, and the refined decorations are worth your time. 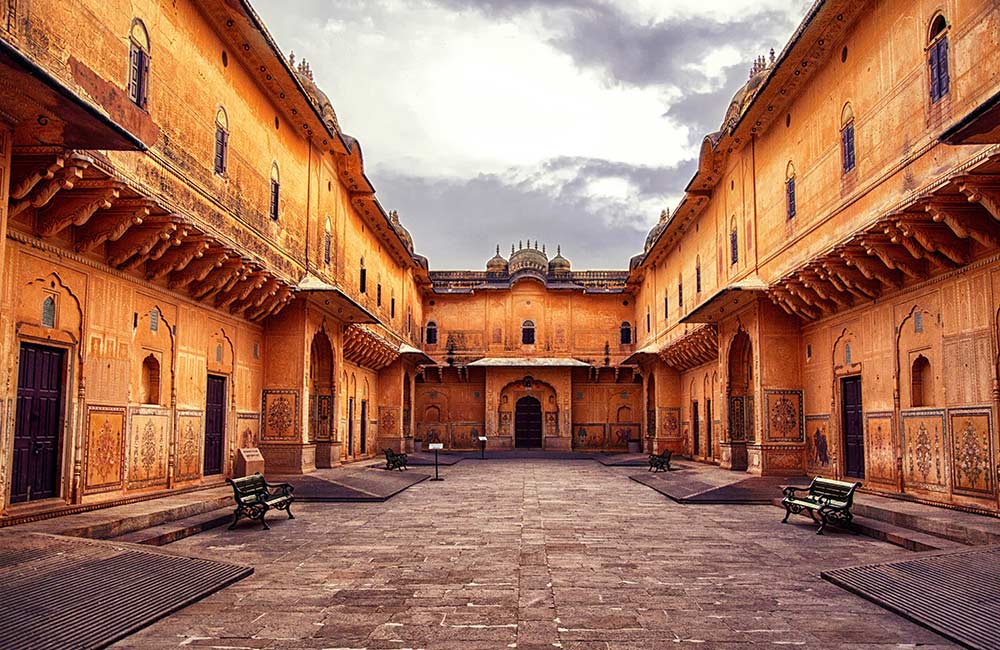 Here’s a story for you. When the troubled spirit of Prince Nahar Singh kept interfering in the construction of this fort, it was placated by building a shrine for his soul to rest and by naming the structure Nahargarh, to honor him. Soon enough, the construction troubles stopped and the fort was built. This was in 1734 and the fort was being built by Maharaja Sawai Jai Singh as a retreat for himself and his family. One of the most famous forts in Jaipur, the structure saw several new additions in 1868 during the reign of Sawai Ram Singh in the form of several palaces. The fort is steeped in stories, mired in folklore, has been the cinematic backdrop in several movies and was once used as a safe house by the English during the First War for Independence in 1857. Today it houses a wax museum and a stunning Sheesh Mahal (palace of mirrors). How’s that for iconic? 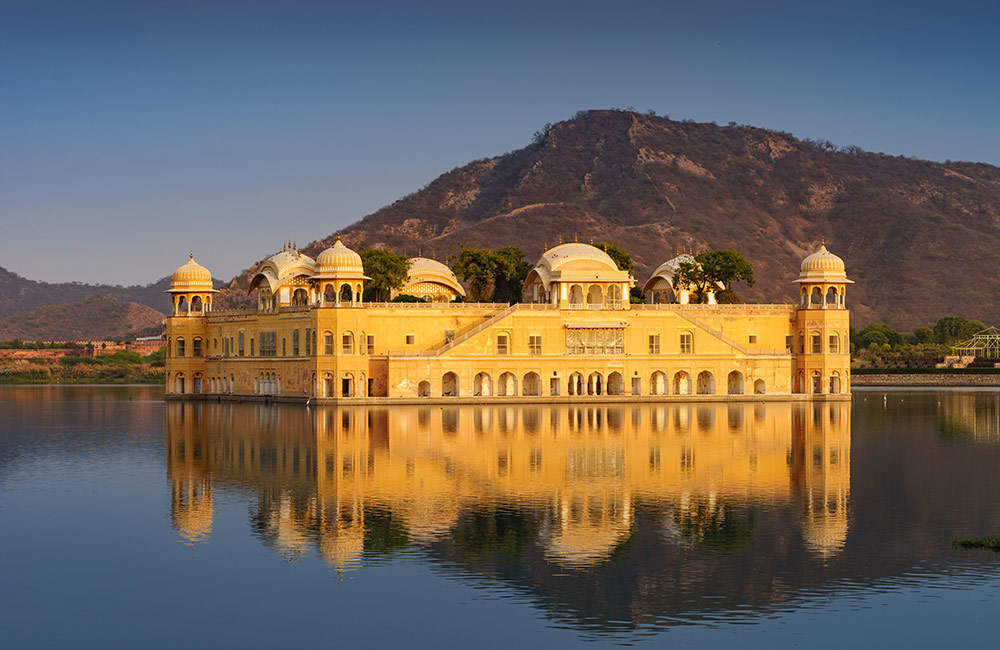 Sitting in the middle of Man Sagar Lake, Jal Mahal is one of the most iconic images of the Pink City. It was originally constructed by Maharaja Madho Singh to hunt ducks, and it saw extensive renovations under Maharaja Jai Singh II of Amer. Since then, it has captured the imagination of tourists and city-dwellers alike. Reflecting the intricate Rajput style of architecture, Jal Mahal actually has five storeys, with only the top floor visible above the water. The red sandstone structure attracts visitors with picturesque views of the lake, relaxed boat ride that gets you there and simply for being such an archeological marvel. 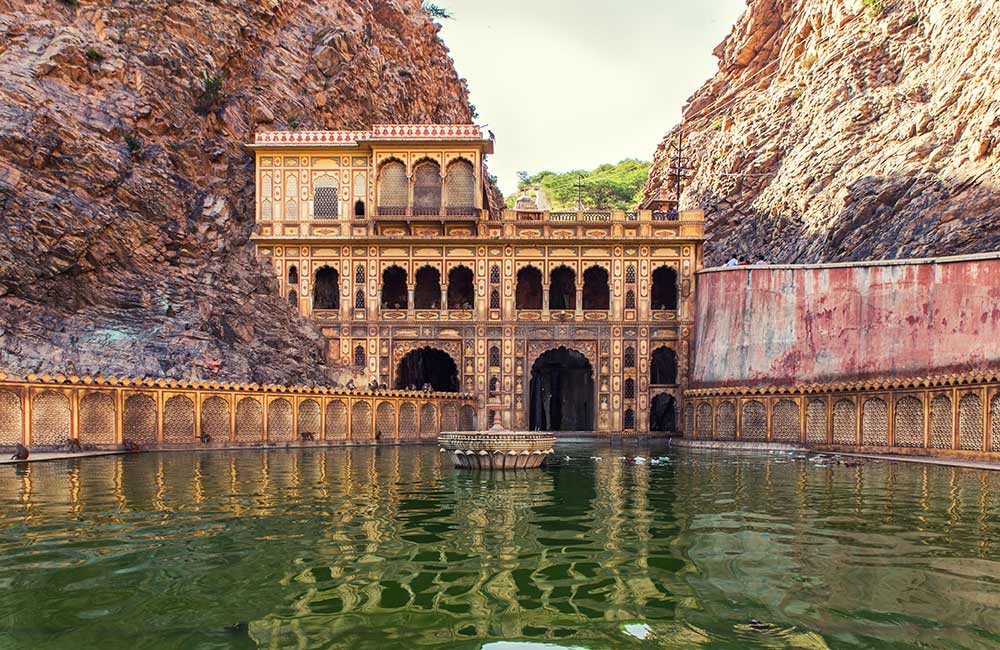 Huge water bodies, armies of thieving monkeys and an ambiance so calm you wouldn’t believe the chaotic traffic and all its noises are just 10 Km away. This is what you feel at Galta Ji, a revered temple just east of the city. If you’re looking for more things to do in Jaipur, a trip to this beautiful temple complex should figure on your list. Built in the 16th century by Diwan Rao Kriparam, a noble at the court of Sawai Jai Singh II, the temple features typical Rajasthani architecture with carved pillars of pink stones as well as beautifully painted walls. Centered on a natural spring that feeds the seven sacred tanks or kunds, Galta Ji is a must visit for its religious significance (you could wash away all your sins with a dip in its kunds, it is believed) and its architecture. 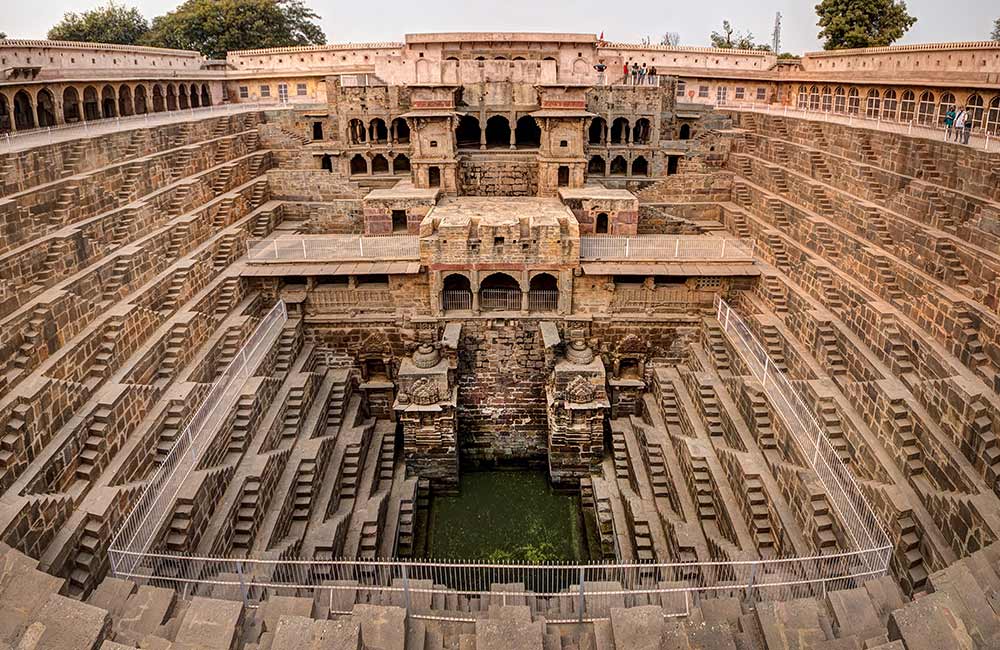 Locally known as Chand Baori, Abhaneri Step Well, about 95 Km from Jaipur, is one of the most attractive step wells in western India. Built between 800 CE and 900 CE by King Chanda, it is dedicated to Harsiddhi Mata, the regional goddess of joy. Comprising over 13 storeys and 3500 steps, Chand Baori is definitely worth a visit, even if it means spending some time away from the monuments in Jaipur. Exquisitely carved and visually spectacular, Abhaneri Step Well is an architectural marvel that not only has utility as a water source during droughts and no-rain months, but is also a thing of beauty to be savored.

Apart from these, other historical places in Jaipur worth a visit are the Shree Sanjay Sharma Museum, Sisodia Rani Palace Garden and Moti Doongri.

Once you are done with your sightseeing, you could pop into one of the city’s many eateries for a sumptuous, often over the top, meal that is almost always served with warm hospitality. Read our blog on the 10 Iconic Restaurants in Jaipur to know where you’d find the best dishes in the city.

The city has a lively night scene, and if you’re faced with the question “where to Party in Jaipur at night” read our blog on the best nightclubs in Jaipur to get the real picture. And, needless to say, there are loads of places to shop in Jaipur with the most iconic one being the Babu Market, right in the heart of the Pink City. Going with Kids? Head to one of the water parks in Jaipur to watch them have the time of their lives while you get those precious minutes alone!

In all, Jaipur is one of the most popular tourism spots in India for a reason, and if you haven’t been there yet, we suggest you read our definitive guide on the best time to visit Jaipur and plan your trip right away!