UNESCO World Heritage Places in Rajasthan you must Explore

Rajasthan is one adventure that you should most definitely experience. It is an experience that leaves you with feelings of awe, grandeur, and hygge. The mix of culture, old and new, is what gives Rajasthan it’s essence. On one hand, you see magnificent, royal structures that have stood the test of time, and on the other, you can see influences of technology and urbanization coming up in the most unexpected places. From local crafts to traditional food, everything here has a pop of color and Rajasthani heritage that stand out boldly against the desert land. The state has something to offer to everyone, whether you go exploring during the day or at night.

Apart from its rich and colorful culture, Rajasthan draws tourists in humongous numbers with its majestic forts and wildlife areas. Some of these places are so significant that these have made it to UNESCO’s World Heritage Site list. The Hill Forts of Rajasthan comprises six magnificent fortresses that have stood the test of time, giving a peek into the state’s storied past and aesthetical evolution. Apart from these, a protected territory and an astronomical observatory are also UNESCO World Heritage Sites.

So, here they are… 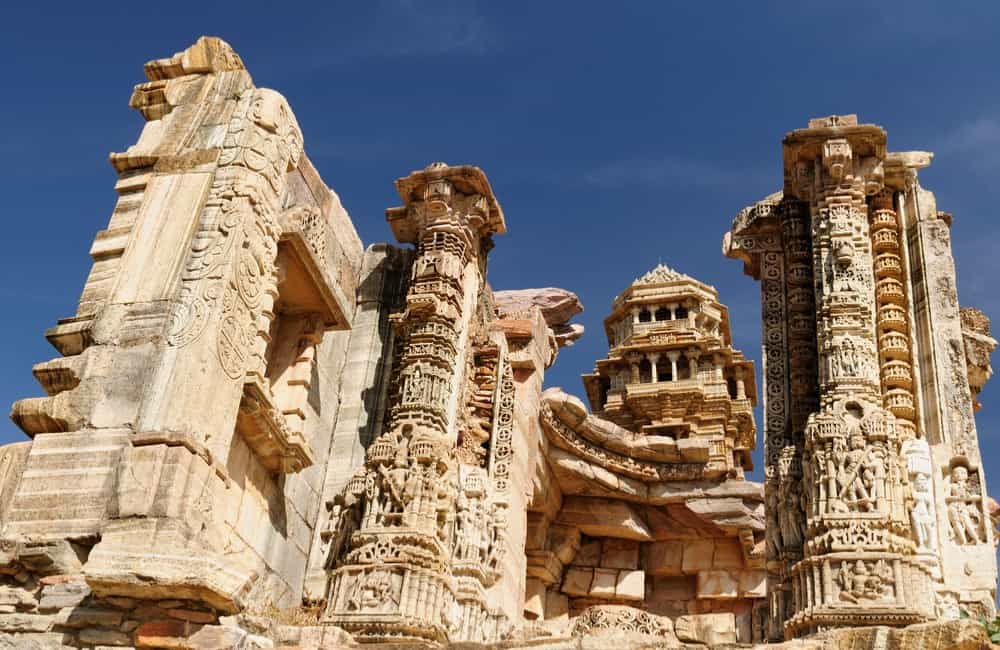 Extensive greenery surrounds Chittorgarh Fort, and a tranquil lake lies within its bricked walls. A sightseer would observe that the regal fort zigzags towards the entrance. It has an ascent of 1 km from the plains after crossing a bridge made of limestone. Two high towers dominate this majestic fortress. Upon entering, you’ll likely be awestruck by the sheer magnitude of the palaces and temples that it encompasses.

One of the leading heritage places in Rajasthan, Chittorgarh Fort saw many wars. The Mewar Kingdom controlled it in the beginning of the 7th century. In 1303, Alauddin Khilji, the then Turkic ruler, defeated Rana Ratan Singh’s army to capture it. There were many battles fought later over control of the fort between Rajputs and Mughals.

However, things finally came to a halt in 1616, with Mewar devastated financially and in human resources due to all the battles fought against the Mughals. So, the then Rajput ruler, Amar Singh, and Mughal emperor Jahangir entered a peace treaty with four significant clauses. One of these clauses specified that the fort would never be repaired again, as the Mughals feared that being a mighty bastion, the fort could become a seat for future rebellions. 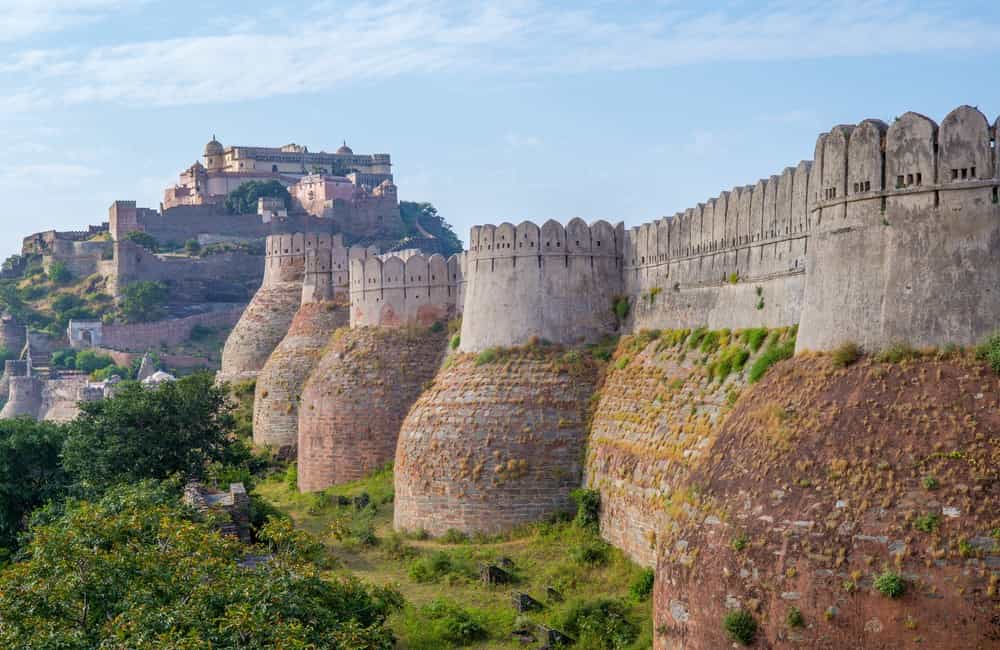 The invincible Kumbhalgarh Fort stands on an 1180-meter high ridge, providing a picturesque view. Its 36-kilometer long wall is the second longest in the world, after the Great Wall of China. This magnificent fort has 360 temples, such as a Ganesh Temple and also those dedicated to Jain deities. Despite being around 700 years old, it is still intact and stands spectacularly against the untouched backdrop. The architecture of the fort resonates with the diverse culture and heritage of Rajasthan.

Kumbhalgarh Fort was the birthplace of one of the most notable Rajput Kings of Mewar, Maharana Pratap. While other events until the invasion of Alauddin Khilji are obscure, some believe King Samprati of the Maurya age built the original fort. In its present form, it was designed by Rana Kumbha, a ruler of the Sisodia Rajput clan. The fortress, which represents the glory of the Rajputs, is one of the many must-see heritage places of Rajasthan. 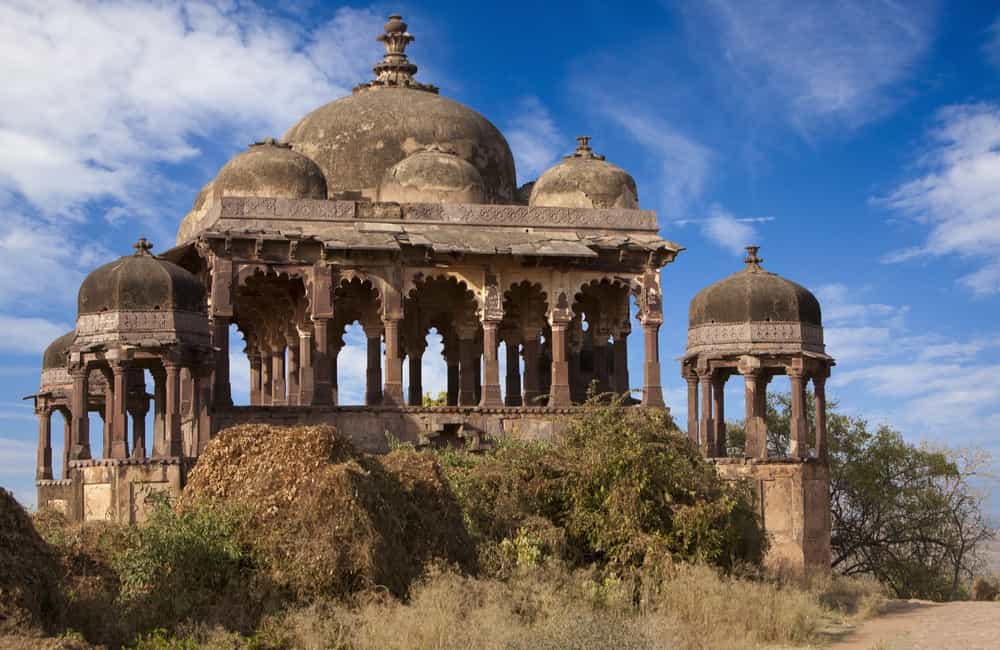 The ancient ruins of Ranthambore Fort have an artistic appeal to them. Its architecture is unique in the way it exemplifies unconquerable power. There are three Hindu temples and a Jain temple inside the fort. Built during Sapaldaksha’s reign in the mid-10th century, the fort has witnessed several conquests and attacks. Ranthambore Fort was taken over by Muslim Ghurid ruler, Muhammad of Ghor after defeating Prithviraj Chauhan in AD 1192. It was later handed over to the Kachwaha Maharajas of Jaipur during the 17th century, remaining a part of Jaipur state until India’s Independence. 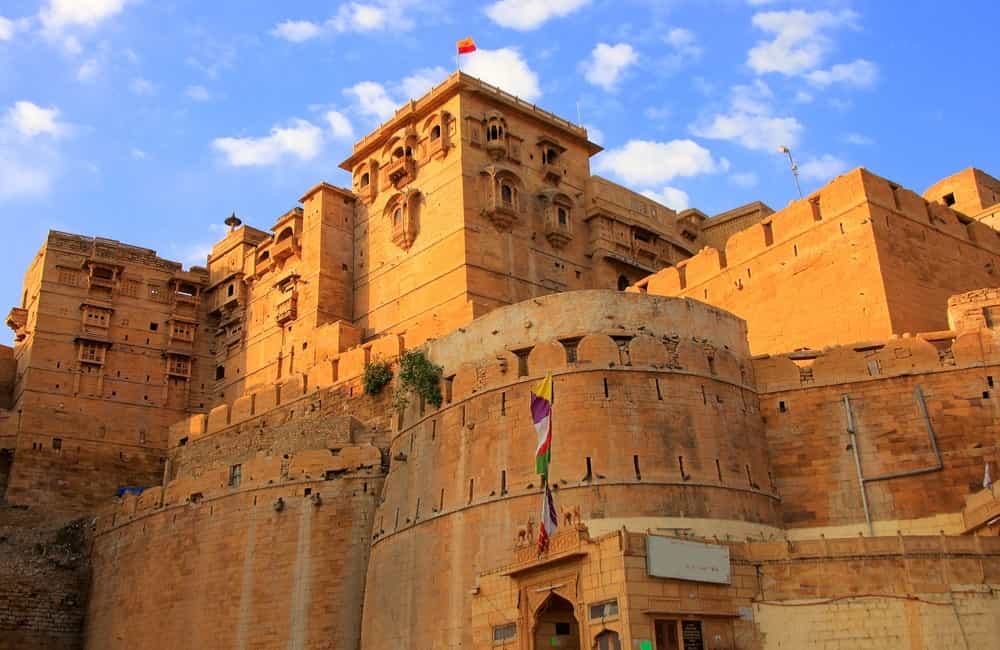 An excellent example of Rajputana architecture, this fort captivates with its deep beige hues during the day. With distinctive art and architecture, this magnificent fort is the perfect visit for those excited by intricate arches and skillfully carved engravings. There are several attractions inside the fort; Raj Mahal (Royal Palace), Laxminath Temple and Jain temples are some of the more prominent places to visit within the fort. The Fort hosts seven Jain temples built during 12th and 16th centuries, the largest among which is Parshwanath Temple. Jaisalmer Fort was built in 1156 by King Rawal Jaisal, who founded the city of Jaisalmer. The historical structure is also known as Sonar Kila or the Golden Fort, owing to its color. 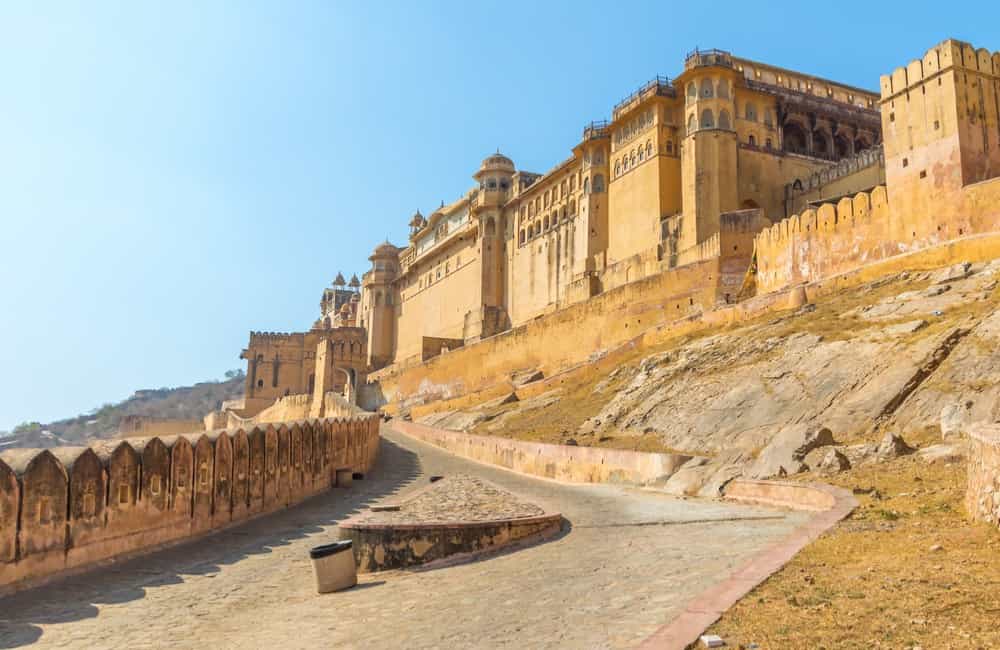 The largest among all the forts in Jaipur, it is a must visit when in the Pink City. Amber derives its name from Ambikeshwar Temple devoted to Lord Shiva, which is located atop Cheel ka Teela or Eagle Hills. Local folklore, on the other hand, suggests that the fort’s name actually originates from the name Amba, one of the many names of Goddess Durga. Man Singh I, one of the first war chiefs of Emperor Akbar, began the construction of the marble and red sandstone fortress in 1592. It is one of the many attractive sites epitomizing the culture and heritage of Rajasthan in its intricate carvings.

An attractive and opulent palace, Amber or Amer Fort was built on four different levels, each with its own private courtyard. It includes the Diwan-i-Khas, Diwan-i-Aam, Sheesh Mahal (palace of mirrors) and Sukh Niwas, which has artificial cooling.

Sheesh Mahal (Mirror Palace) is the most famous and striking part of Amber Fort. Its architecture is a beautiful blend of Islamic and Rajasthani artistic elements. The walls and ceilings are adorned with exquisite engravings and flowers, carved out of pure glass. The convex mirrors used are meticulously done with tinted foil and illuminating paint that make them shine even at night. One of the many stunning features of the Sheesh Mahal is the science behind its construction.

Local folklore suggests that the king constructed Sheesh Mahal for his wife, who cherished sleeping in the open under the glittering stars. Since security was of prime importance, this luxury was out of reach, and so Sheesh Mahal came to be. Since it is lined wall to ceiling with strategically cut and placed mirrors, it can split the reflection from a single burning candle into countless tiny lights reflected from each panel, illuminating the entire palace. So, a single flickering light would turn into a thousand stars for the queen, just like in the night sky. 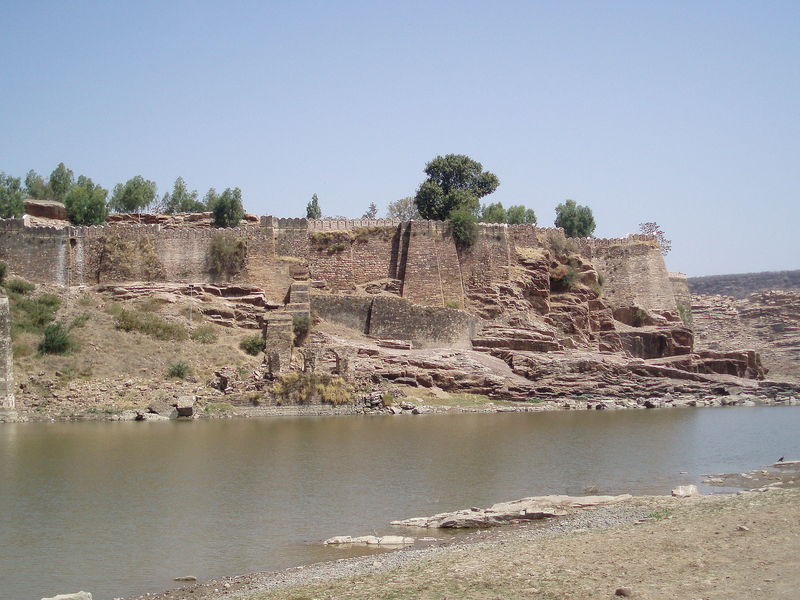 Gagron Fort resembles an island, surrounded by water on three sides and a jungle on the fourth. Virtually impregnable, this fort stands apart as one of the most strategically placed forts of all in the country. The aesthetic design and history of the structure make it one of the most culturally rich and alluring heritage places in Rajasthan. With its magnificent architecture, it transports you to a time when Rajputana royalty was at its peak.

The foundations of the fort were laid in the 7th century; however, it took almost seven centuries to complete its construction due to its defensive and unassailable nature. The Khinchis of Jhalawar controlled the fort, during whose reign it was one of the most prosperous settlements in the country. Many believe that Alauddin Khilji eventually invaded the fortress in the 1300s, but it came back under the rule of the Khinchis after a series of invasions and battles. Gagron Fort saw many sacrifices and incidents of bravery and martyrdom, and local lore alone makes it an interesting site to explore. 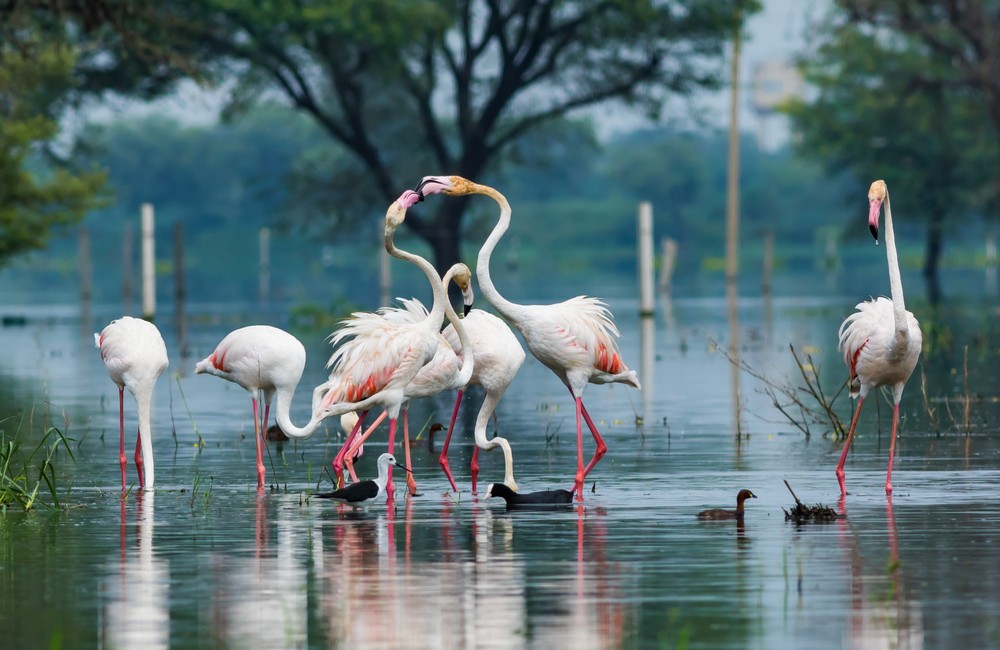 Keoladeo National Park features a montage of dry grassland, woodlands, and swamps. The sanctuary, created over 250 years ago, is named after Keoladeo or Lord Shiva Temple within its boundaries. Initially a hunting ground for the Bharatpur royalty, the park was designated a sanctuary in 1976.

This sanctuary is home to over 360 species of birds, 50 species of fish, 370 herbaceous species, 13 species of snakes, seven amphibian species, five kinds of lizards, seven turtle species and a vast variety of invertebrates. A sanctuary to over a thousand birds, especially during winters, this heritage place in Rajasthan is mainly known for the nesting of visiting migratory birds.

Visited by hundreds of bird watching hobbyists, Keoladeo National Park, with its scenic green lands and abundant wildlife, are a great place to escape the daily hustle bustle of city life and get in touch with nature. Peter Scott, Founder of the World Wildlife Fund, appraised Keoladeo National Park as one of the world’s best bird sanctuaries. 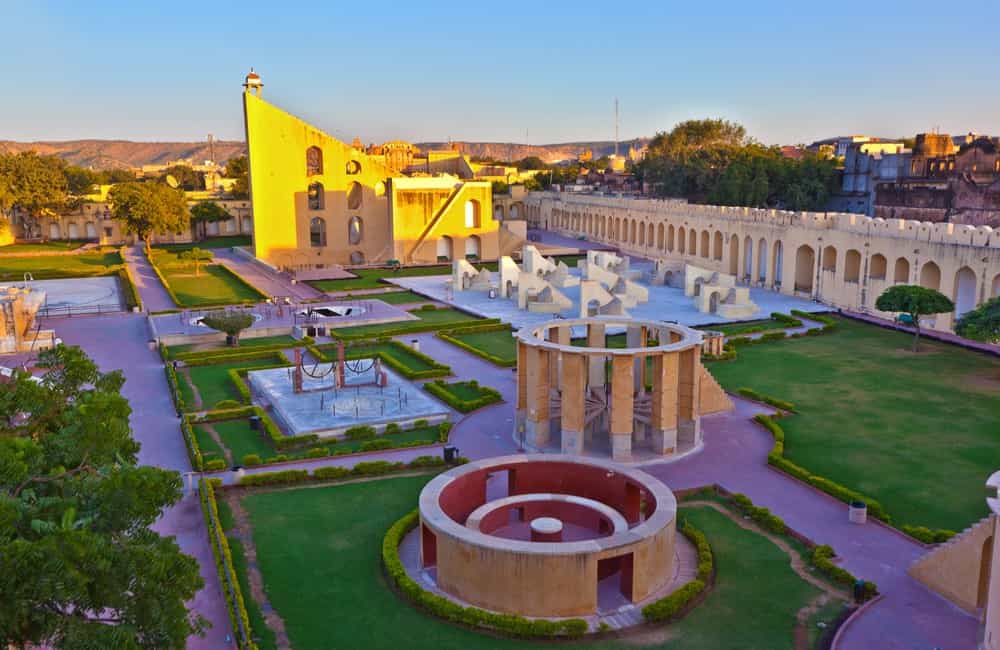 Jantar Mantar is a massive edifice which clocks time accurately. This colossal stone sundial stands parallel to the earth’s axis. It was built in the 18th century by Maharaja Jai Singh II, who made five of these across North India. A collection of nineteen astronomical instruments, Jantar Mantar allows the observation of planetary positions with the naked eye. A shining example of advanced astronomy in India, it has also helped many people compile astronomical tables. The term Jantar Mantar was aptly named as Jantar means “instrument” and Mantar means “calculation.” You will have no trouble accessing it from whichever hotel in Jaipur you are staying at, thanks to its central location.

These are the eight UNESCO World Heritage Sites in Rajasthan that will captivate all your senses. Wait no more. Plan a trip and immerse yourself in the culture and heritage of the state, today!