Take a Break at these Serene Hill Stations near Pune

Taking a break from activities and environments that are usually associated with stress and anxiety is essential for our physical and mental wellbeing. Pune is a city, where you might find yourself going through the same emotions. And, when it comes to choosing a location for that much-needed break, you can’t help but mention the hill stations near Pune. These serene spots in the Western Ghats offer a panoramic view of lush greenery and blue lakes. And, the peace and tranquillity of these hill stations are such that you will keep coming back for more. All in all, hill stations are ideal for those yearning for a break from their mundane lives. That said, here’s a quick rundown of some of the most popular hill stations near Pune.

Hill Stations near Pune within 100 km

Lonavala | Among the Best Hill Stations near Pune within 100 km

Situated amidst the Sahyadri Ranges that separate the West Coast and the Deccan Plateau, Lonavala is among the most frequented hill station in Pune district. In fact, the list of most amazing hill stations near Pune is incomplete without the mention of Lonavala. Lonavala is located on the Pune-Mumbai Expressway, and most of the buses passing through it, halt here. That’s also one of the main reasons for the surging popularity of this region.

On reaching Lonavala, the first thing you will notice, besides its scenic beauty, is the large number of pompously lit chikki shops. ‘Chikki,’ a traditional candy made of jaggery and groundnuts, is the speciality of this region. You may not believe that some people living in Mumbai and Pune especially travel to Lonavala to buy this sweet during festive times. While in the town, remember to visit Lonavala Lake, Tiger’s Leap, Bhushi Dam, Lohagad Fort, Rajmachi Point and Della Adventure Park.

Khandala | Among the Best Hill Stations near Pune within 100 km

Located around 3 km from Lonavala, Khandala is yet another amazing hill station near Pune. Together, Khandala and Lonavala are named, ‘Twin Hill Stations’ as they have so much in common, and most, who visit one of these, visit both. Those who want to have a panoramic view of Khandala must go hiking to Duke’s Nose. Besides hiking, one can also go for rock climbing, rappelling or valley crossing in and around Khandala. If you are a history buff, you must visit the historical Karla and Bhaja caves. About 16 km from Khandala, these are ancient Buddhist caves.

Hill Stations near Pune within 200 km 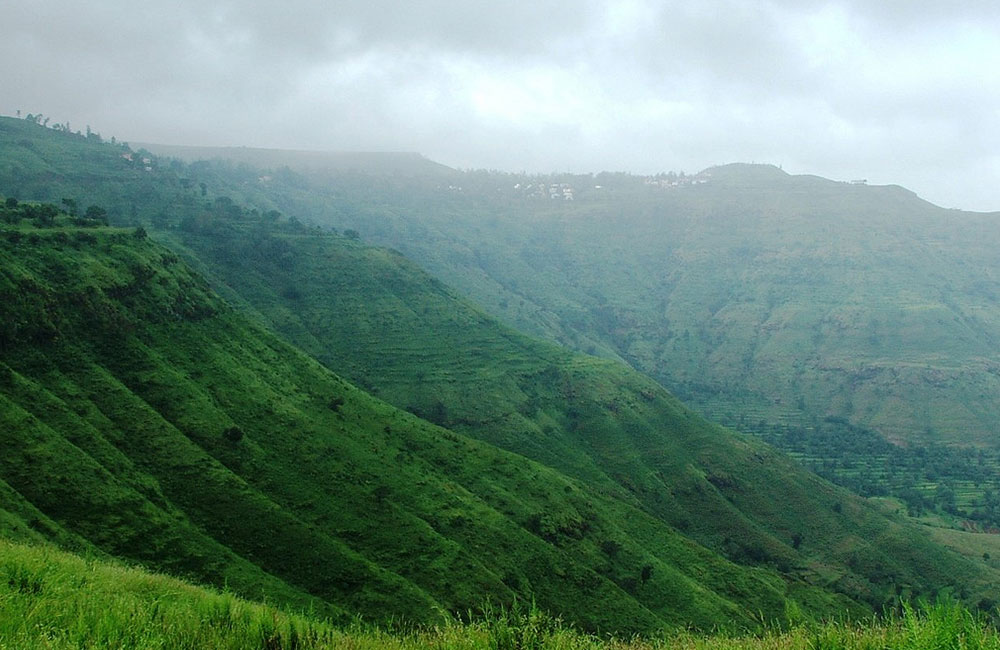 Panchgani | Among the Best Hill Stations near Pune within 200 km

Panchgani is another hill town located in the Sahyadri Ranges. Locals believe that Panchgani’s air has healing qualities that can help one restore their body and psyche.

When the hill station was first discovered by the British, it didn’t have a name. The hill station was named Panchgani owing to the five villages (Amral, Dhandeghar, Khingar, Godavli and Taighat) in its vicinity. As the place has a pleasant weather all throughout the year, the British developed it to use it as their official summer retreat.

There are many things that you can do here, ranging from horse riding and paragliding to go karting. Besides these, you can also visit a lot of tourist attractions; some of them being Table Land, Sydney Point, Mapro Garden, Devil’s Kitchen, and Parsi Point. 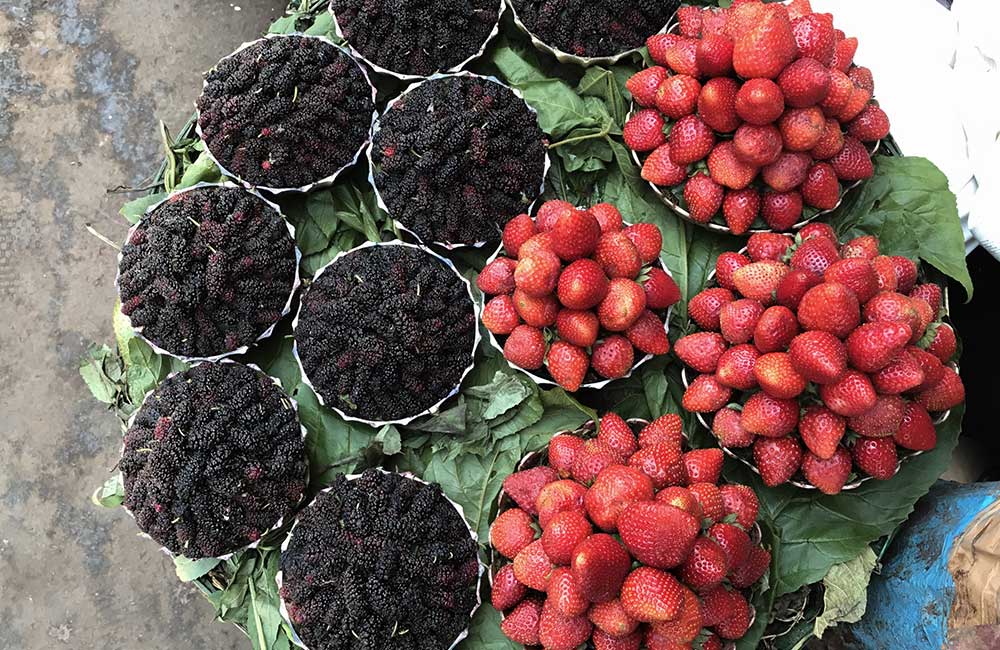 Mahabaleshwar | Among the Best Hill Stations near Pune within 200 km

Located in the Satara district of Maharashtra, around 4440 metres above sea level, Mahabaleshwar is one of the most popular hill stations near Pune. The fact is aptly proven by the sheer number of hotels in Mahabaleshwar that range from luxury and upscale to budget and lodges.

The town is the source of River Krishna that flows through four major states: Maharashtra, Telangana, Andhra Pradesh and Karnataka. Legend has it that the river came out of the mouth of a cow statue and that River Krishna is Lord Vishnu, whereas its other two tributaries, the Koyna and Venna, are Lord Brahma and Lord Shiva, respectively.

An interesting fact about Mahabaleshwar is that it contributes around 85 percent of the total strawberries produced in India. If you love strawberries, then you must plan a trip to Mahabaleshwar during the famous Strawberry Festival that takes place every year in the spring season.

There are ample tourist attractions to be explored in and around Mahabaleshwar, including Dhobi Waterfall, Babington Point, Arthur’s Seat, Falkland Point, Venna Lake, Connaught Peak and Roman Catholic Church. 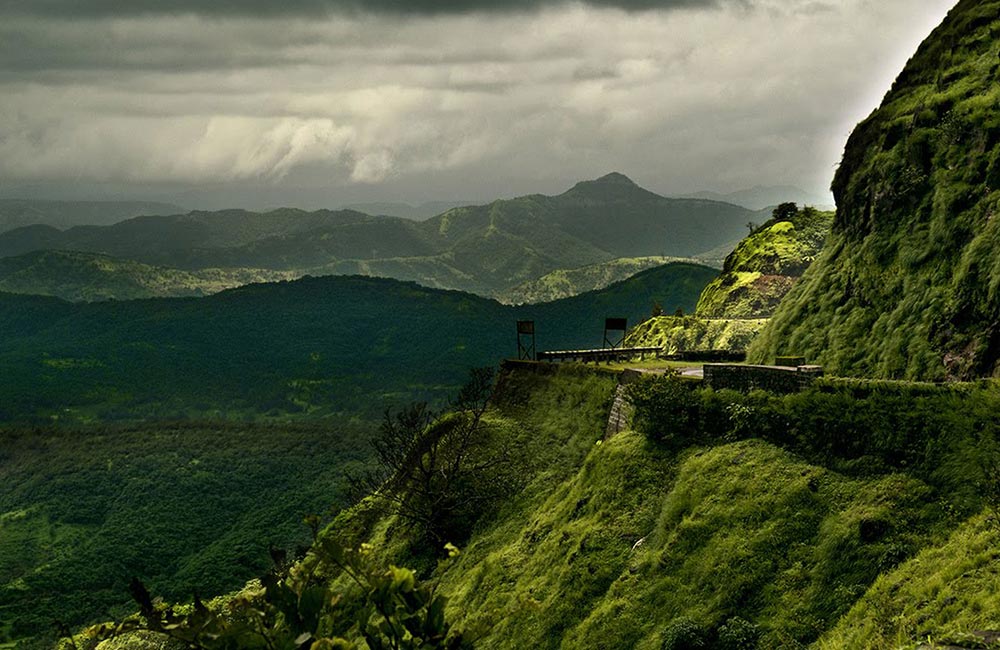 Matheran | Among the Best Hill Stations near Pune within 200 km

Though it is one of the smallest hill stations in India, Matheran is one of the most frequented. It is situated at around 2,600 feet above sea level, resulting in a cool weather. What makes the hill station interesting is the fact that it is Asia’s only automobile-free hill station. Those visiting Matheran need to park their vehicles a few km from the main site and then walk; the option to hire a pony to the main site is also available. Plus, the toy train which whistles past hills is another popular means to reach here.

Another interesting point about this place is that it has 38 lookout points in, with Panorama Point being the most famous of all because of the 360-degree view it offers. When in Matheran, you must visit this point during sunset or sunrise to experience one of the most dramatically beautiful sights you would have ever seen.

Besides Panorama Point, there are several other points too, such as Heart Point, Porcupine Point, Monkey Point, One Tree Hill Point and Rambagh Point. If you want to stay overnight in Matheran, you can stay at one of the hotels or Parsi bungalow turned guest houses in this region. 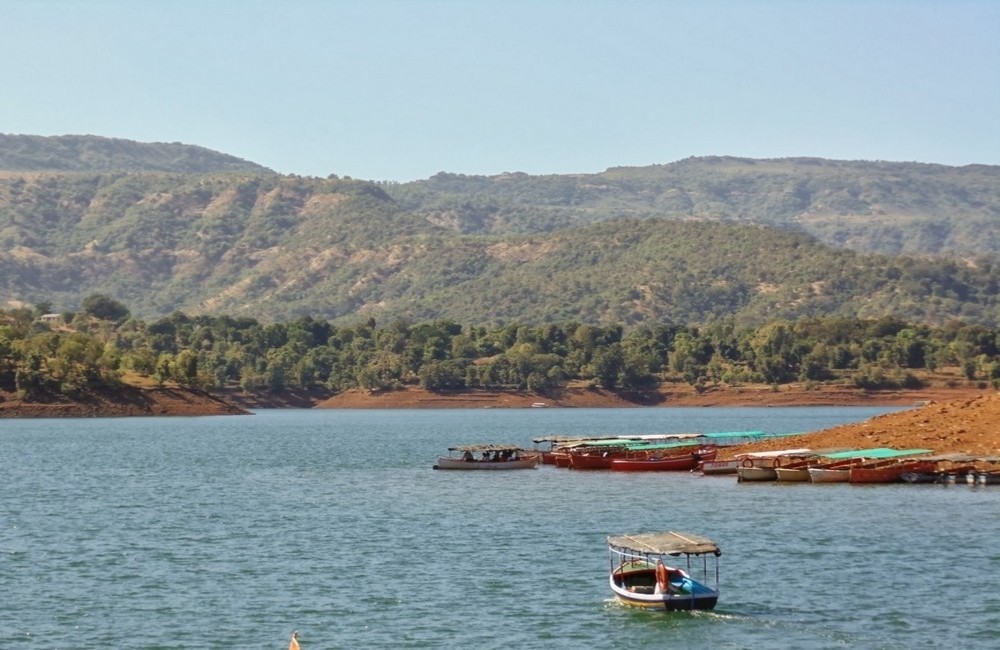 Tapola | Among the Best Hill Stations near Pune within 200 km

Popular as ‘Mini Kashmir,’ Tapola is a small yet serene tourist destination situated near Mahabaleshwar. It is located at the convergence of the Solshi and Koyna rivers.

When in Tapola, you must visit the 90 km long (50 km long by some accounts) Shiv Sagar Lake that is one of the most prominent tourist attractions in the region. If you are a watersports junkie, you can indulge in kayaking, swimming, boating and water scooter rides. Besides watersports, you can also go trekking up till Vasota Fort. However, considering the difficulty level of the trek, you will first have to seek permission from the forest authorities. 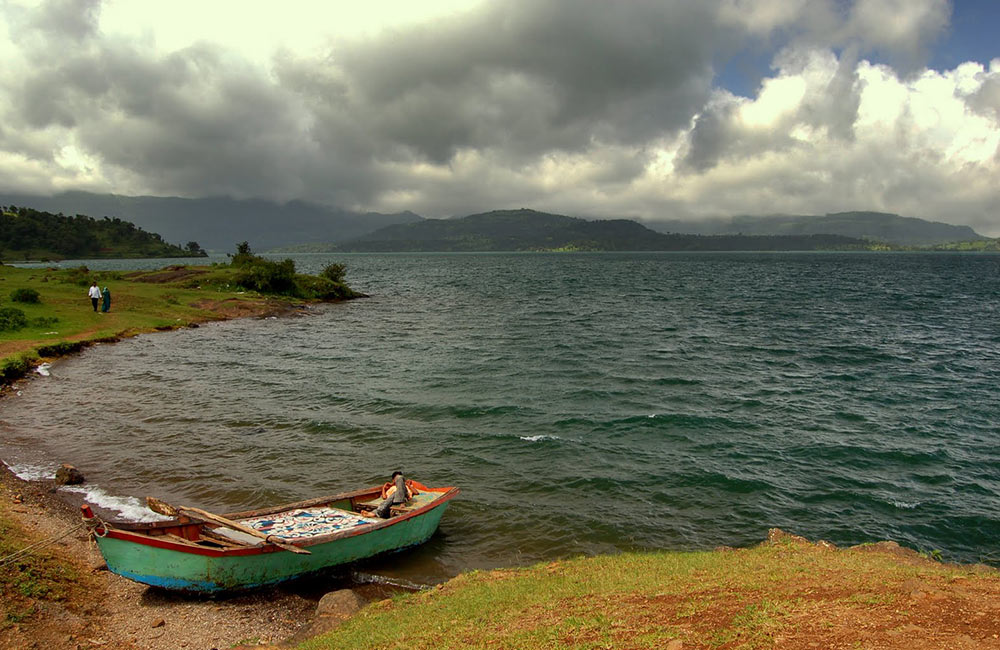 Bhandardara | Among the Best Hill Stations near Pune within 200 km

Located in Ahmednagar district, Bhandardara is famous for being home to Mount Kalsubai, the highest peak in Maharashtra. Besides this, the place is also home to one of the oldest dams (Wilson Dam) and largest lakes (Arthus Lake) in the region. No wonder the literal meaning of Bhandardara translates to “the valley of treasures.”

Bhandardara is one of those untouched and unspoiled tourist destinations that reflect the easy-going lifestyle and rustic charm of rural Maharashtra. Its clean air and beautiful weather all year long makes it a perfect getaway for those wanting to rejuvenate in a place, where nature is in its most pristine state.

Hill Stations near Pune within 300 km 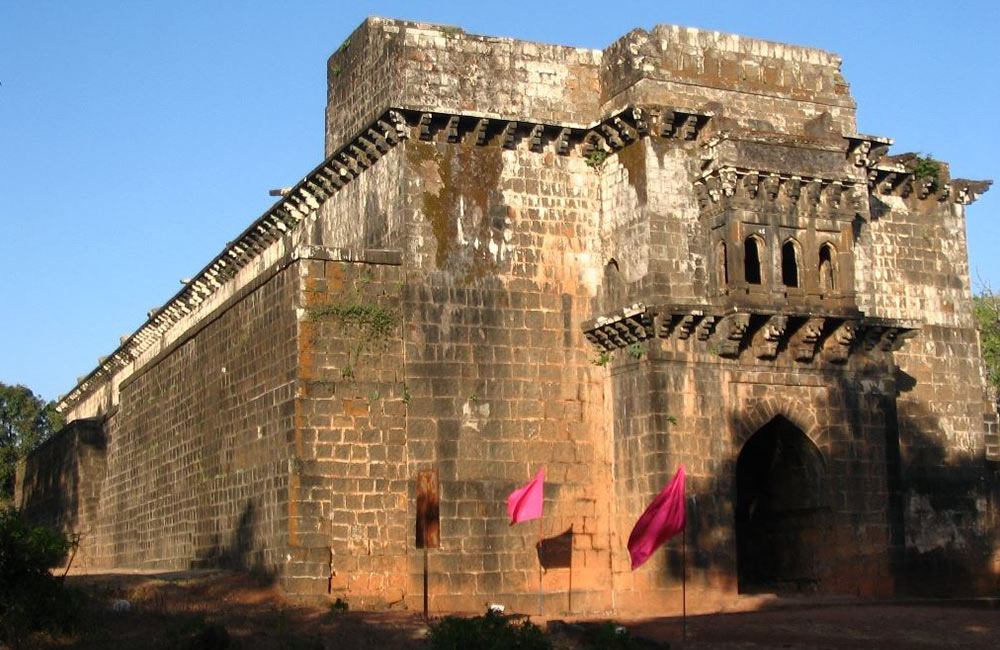 Panhala | Among the Best Hill Stations near Pune within 300 km

Located in the Kolhapur district of Maharashtra, Panhala is an ideal weekend getaway for city dwellers. It’s a beautiful place that offers a panoramic view of lush green valleys and forts from its hilltop. The place has great historical significance, and therefore, even if one is not a history buff, their trip to Panhala would be incomplete without a visit to Panhala Fort that is an ode to the valour of the Maratha empire. Some other must-visit places in Panhala include Parashar Caves, Sambhaji Temple and Botanical Garden that has more than several varieties of flowering plants. 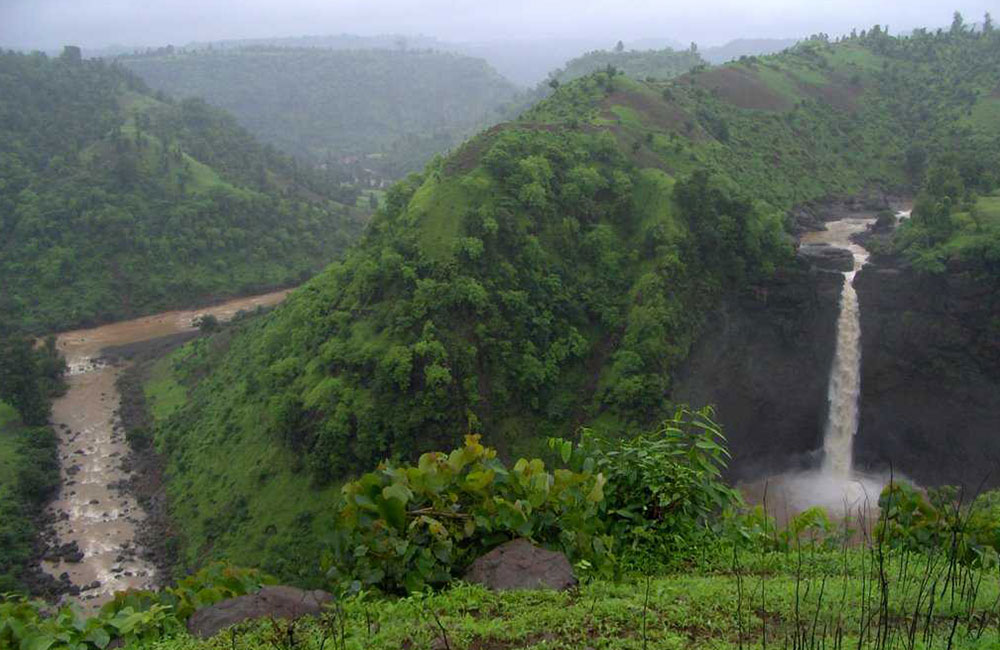 Jawhar | Among the Best Hill Stations near Pune within 300 km

Situated in the Palghar district, Jawhar is a beautiful hill station in the Western Ghats. The place that is one of the oldest municipal councils in Maharashtra is known for its cultural heritage. The mud and charcoal paintings produced by the Warli tribe give a peek into the ancient traditions that have been prevalent here.

Tourists who visit Jawhar must also visit Jai Vilas Palace that is one of the most popular tourist attractions here. It is surrounded by beautiful lush green gardens, and the best part is that as it is located on top of the hill, you can get scenic views. Besides the palace, you can explore Hanuman Point, Sunset Point, Dabhosa Waterfall and Khadkhad Dam.

Hill Stations near Pune within 400 km and Beyond 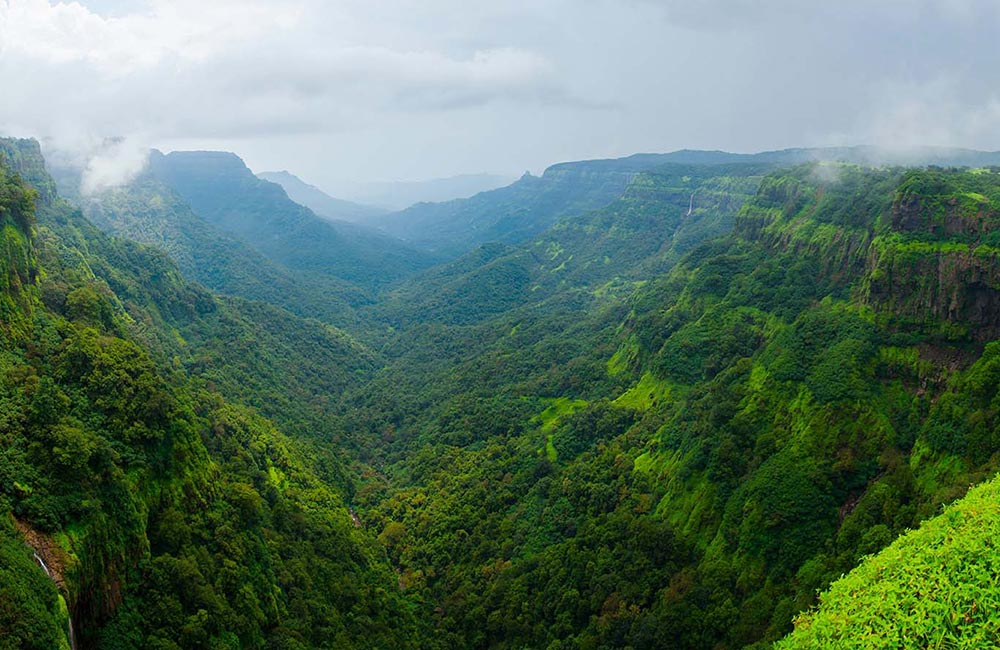 Amboli | Among the Best Hill Stations near Pune within 400 km

Situated at an altitude of 2260 feet above sea level, Amboli is a popular hill station near Pune. The place is surrounded by valleys on three sides, providing an idyllic mix of peaceful surroundings, exotic views, and plenitude of sightseeing options. Some of the major attractions include Amboli Ghat Falls, Shirgaonkar Point, Hiranyakeshi Temple, Madhavgad Fort and the famous Sunset Point.

Though the hill station has recently become popular and the number of tourists is increasing every year, it is still untouched by commercialisation, and therefore is a perfect getaway for those looking for a peaceful and serene vacation with their loved ones. 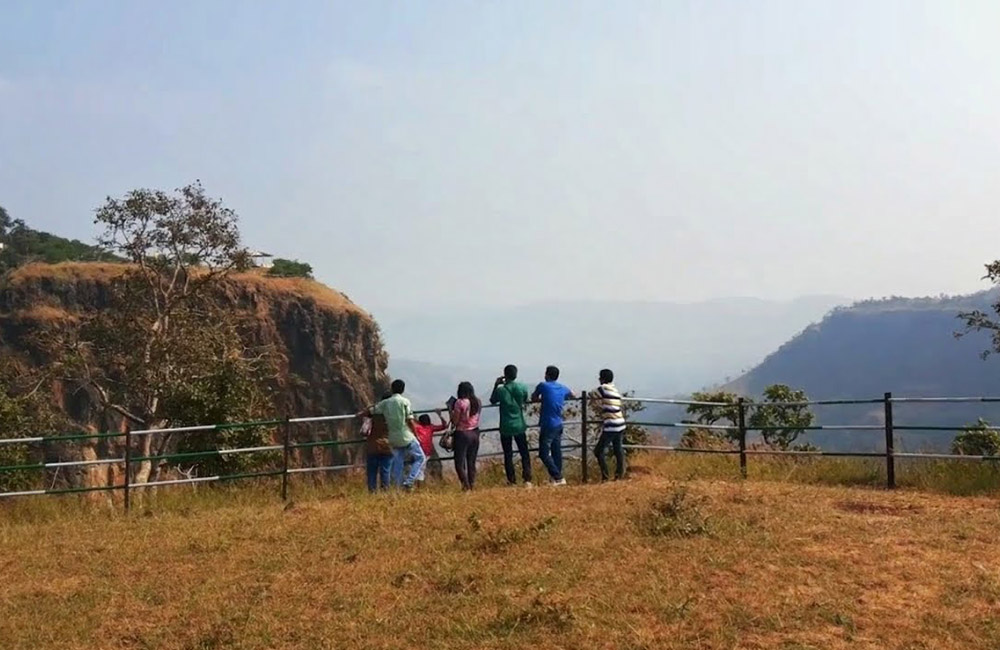 Toranmal | Among the Best Hill Stations near Pune within 500 km

Nestled in the Satpura Range, Toranmal is a popular hill station near Pune. It is popular for its Gorakhnath Temple, which is flocked by thousands of devotees from all parts of the country. If you are an ardent devotee of Lord Shiva, then you must visit this place during the festival of Mahashivratri to be a part of the grand fair that takes place during it.

And, just in case you have been wondering whether Toranmal has something for nature lovers too, the answer is, “Yes.” The place is famous for its lakes: Yashwant Lake and Lotus Lake. The Lotus Lake is covered with Lotus flowers for most part of the year. The water from this lake runs down a cliff, falling into Sita Khai, to form a beautiful waterfall. Some other points of interest in Toranmal include Coffee Garden, Aawashbari Point, Sunset Point and Check Dam. 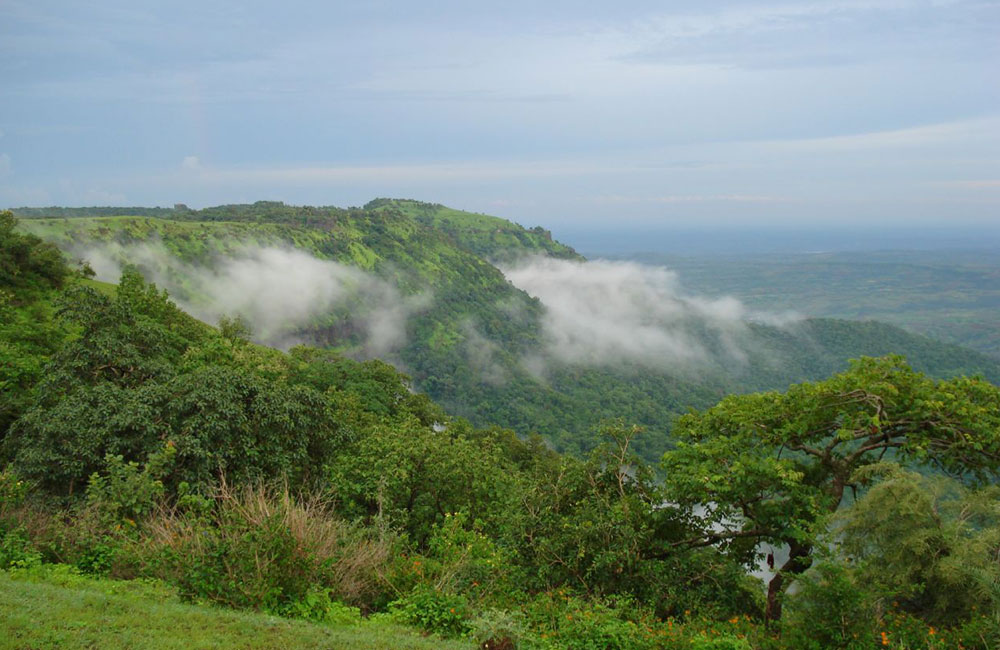 Chikhaldara | Among the Best Hill Stations near Pune within 500 km

Chikhaldara hill station is the same place where Bhima killed and threw Keechaka in a valley. The place has an abundance of wildlife in the form of tigers, blue bulls, sloth bears, barking deer, wild boars, panthers and various species of birds. The place is a blessing for nature lovers as it is replete with serene locations such as pristine waterfalls, coffee estates and lakes. Those who love adventures can trek to the peaks of Chikhaldara, namely Prospect Point, Long Point, Devi Point, Monkey Point and Hurricane Point.

If you liked any of these fascinating hill stations mentioned in the post, and would like to visit them, it is advisable to book a hotel in Pune as the city offers easy and hassle-free connectivity to all these places.