A Trip through Fort Kochi

I love travelling, and I have always wanted to head south. So, finally, after years contemplating a trip to South India, I took one last month with my friends. My destination of choice? Kochi in Kerala! Primarily because of its colonial heritage and Malabari cuisine (I love seafood and meat dishes). Now, I wasn’t going to leave the city without visiting Fort Kochi. So, I did, and walking through the lanes, past hundreds-of-years-old buildings intrigued me more than I had expected. This blog is an account of my trip to the grand colonial-era settlement and what all I liked the most about it. Because it was my first visit to the fort, I hired a local guide, Mr Mathew, to show me all the important places within and tell me in detail about those. On reaching the fort, we were led through KJ Herschel Road, which hugs the coast. At its northern end is Fort Emmanuel, the original Portuguese bastion constructed in 1503. It was an amazing experience walking through the bastion, with Mr Matthew telling us stories of the important events that happened here. I was particularly intrigued by the gunnery, which now consists of only half a cannon mounted on a pedestal. The cannon, with its nozzle facing the sea, was extensively used to defend the fort from foreign invasions, he told us. 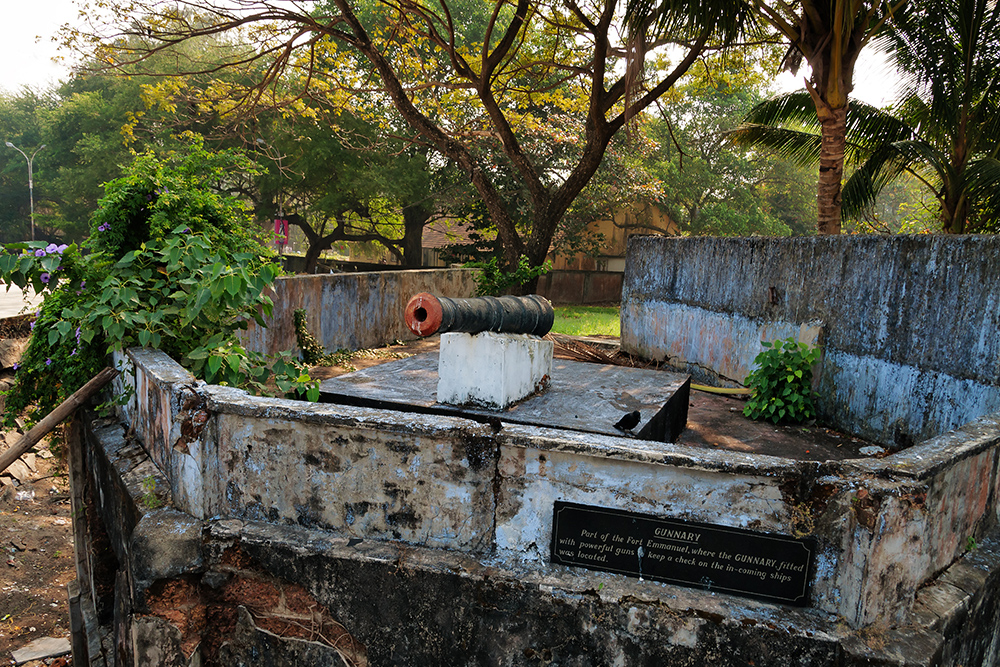 The Gunnery of Fort Emmanuel

From here, we went to the Indo-Portuguese Museum at Bishop House. I was amused to notice a mix of Keralite and colonial elements in its architecture; it even has pointed arches and windows with tracery, the kind you see at Gothic cathedrals. There is a door here, which has designs that make the latch look like the staff of Lord Shiva’s trishul. Other than that, I was amazed by a Christian cross, made of wood and silver! Next up was the crowning glory of the fort, St Francis Church. The Dutch and the British destroyed most of the structures inside the fort built by the occupants before them, but this they let stand. They even restored the church when either of them took over the fort. It has typical Portuguese architecture, which is also visible on the cathedrals of Goa. The Gothic pulpit made of wood, resting on a raised marble column, particularly caught my fancy. Vasco Da Gama, one of the most famous seafarers in history, was buried here; our guide showed us the exact spot of his burial. Further, we made our way to Santa Cruz Basilica, another rather impressive church within Fort Kochi. I was taken aback with its plain exterior, but the interiors are pretty nice. The Baroque-style round arches are covered with orange and white tiles. The beginning of the aisle is marked by arched gateways with delicate tracery. When I first saw the main altar, I thought it was open from above because I could see the bright blue sky and clouds. A closer look made me realise that it was actually a painted wall. 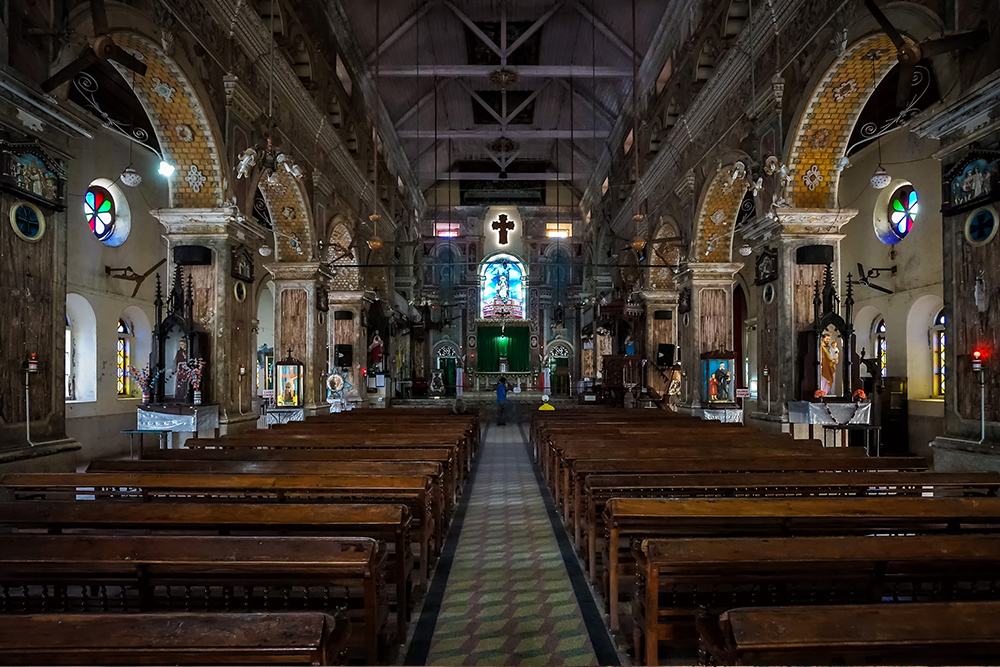 Mr Mathew then took us to Thakur House, a grand manor-like building, dating to the Dutch era. I mainly remember it for its collection of exquisite glass lamps and earthenware. Next, we saw David Hall, a simple building with white walls and brick roof. The trusses supporting its roof are characteristic of Dutch architecture, we were informed. The skylight above its door with three square glass windows reminded me of my grandmother’s house in Lucknow. The next place he took us to was the Dutch Cemetery. Many people consider graveyards creepy, but I personally love these, primarily because of the immense calmness and greenery at such sites. The cemetery houses tombs of Dutch soldiers, who were killed during the struggle to capture Fort Kochi from the Portuguese. I just sat on the lush grass, admiring the incredibly carved sarcophagi and sepulchres, some even bearing coats of arms. Our well-informed guide was nice enough to translate Dutch inscriptions on the tombs. 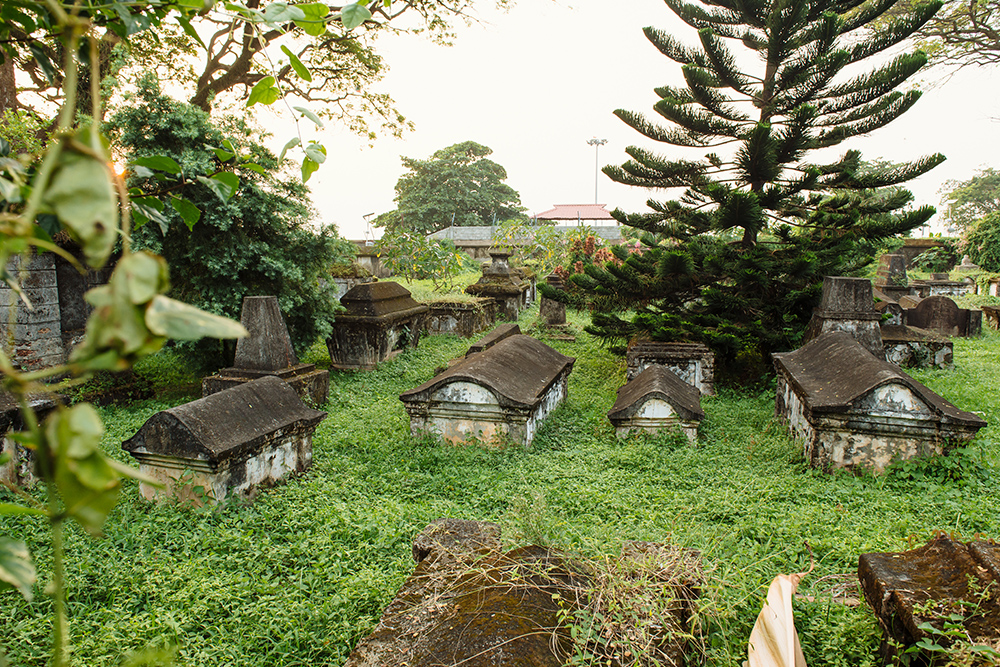 The Calm and Lushness of the Dutch Cemetery

Further, our guide showed us Koder House, another manor-like building, now converted into a heritage hotel. This is one of the structures that actually make you feel as if you are in Europe. I still remember its shining wooden floor and intricately carved wooden furniture. The staircase, our guide told us, is made of teakwood. We also walked on a hanging bridge, which forms a passage between Koder House and an adjacent building. This bridge instantly triggered a flashback of the Bridge of Sighs in Venice as it also connects two buildings. From here, we went to see Vasco House. It is not much in appearance, but the fact that it was the residence of Vasco Da Gama made it appealing to me. Another place we explored is the Dutch-style Bastion Bungalow. It has such a nice courtyard in front that I felt like playing cricket there. There are apparently secret tunnels here, but our guide wasn’t able to show us any (probably because they are secret and not many know about those). He then led us to Old Harbour Hotel, a simple white building with panoramic views of the sea. We were told that its courtyard is a Portuguese architectural element, whereas its arches are Dutch. One of the buildings I liked the most was Pierce Leslie Bungalow because of its combination of European and Keralite architecture. We also visited Old Lighthouse Bristow Hotel, which is yet another colonial building facing the open waters. Further, we paced ahead to Delta Study. A school now, it used to be a warehouse in the olden days. Images of merchants coming and going, and stuff being loaded and offloaded in ginormous amounts filled my mind as our guide told us about it. Finally, we visited Brunton Boatyard, which has high ceilings, long passages and humongous halls. The reason for it is, as our guide told us, that it was originally a shipyard. He also informed us that the British naval vessels were constructed here for use in WWII. 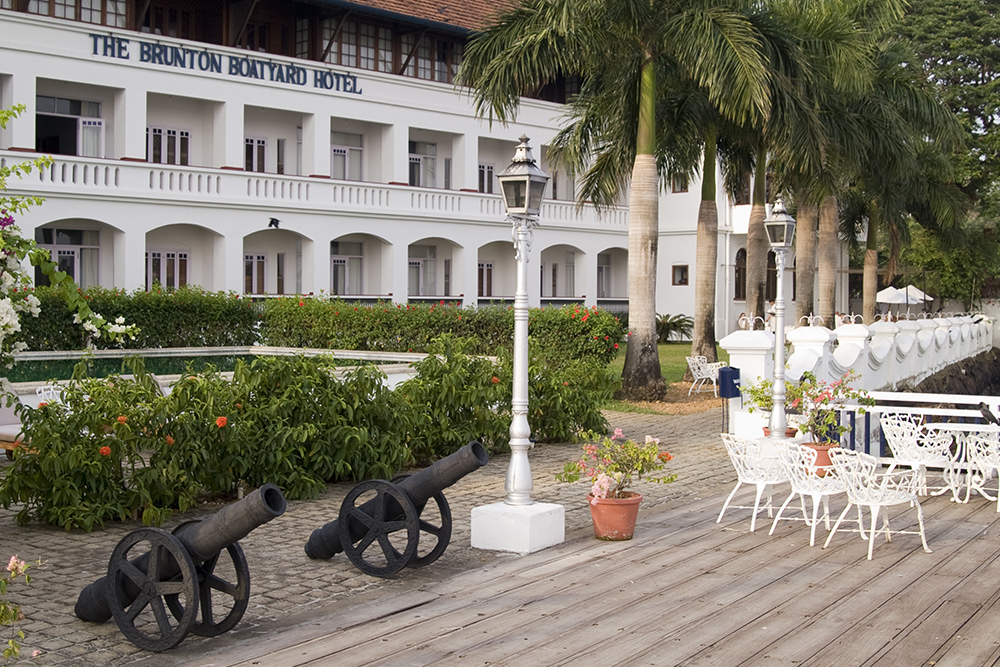 The Colonial Grandeur of Brunton Boatyard

Fort Kochi also has a Jewish Quarter, which I couldn’t explore due to time crunch as I was primarily in the city on a short trip. Next time, I am going to plan a long holiday to visit the Jewish Quarter and Chinese Fishing Nets, and I will be definitely writing another blog on it. In the meanwhile, you too keep exploring India and sharing your experiences.