10 Must-Visit Buddhist Sites in India for a Spiritual Experience

Synonymous with peace, mediation and spirituality, Buddhism is one of the oldest and most widely practiced religions in the world. And considering that Gautam Buddha, the founder of Buddhism, spent many years of his life in India, there are some beautiful Buddhist pilgrimage places in the country for you to explore. Holding great religious significance and exuding divinity, these sites are frequented by pilgrims and historians from across the globe. So, if you are looking to explore the popular ancient Buddhist sites in India for inner peace and serenity, the following are a must-visit. 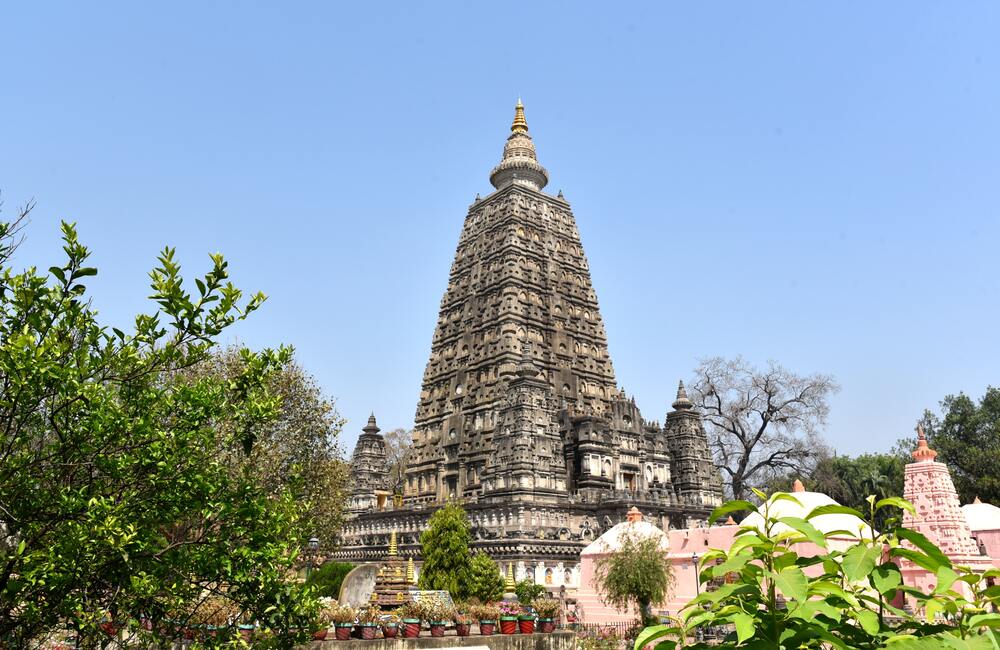 Counted among the top Buddhist pilgrimage places in India, Bodh Gaya is a must-visit for pilgrims and tourists. After giving up his princely life to practice asceticism, Siddhartha Gautama sat in meditation under the Bodhi tree here for 49 days to attain enlightenment. A red slab of stone under the Bodhi tree is the spot where Buddha meditated for many days.

Gaya is also known for housing the famous Mahabodhi Temple which has a huge statue of Gautam Buddha in deep meditation. The temple is frequented by Buddhists and tourists keen to know about the life and teachings of Lord Buddha. The revered Mahabodhi Temple has also been a part of the UNESCO World Heritage Sites list since 2001. The place exudes a different charm in winter when many monks, including the Dalai Lama himself, come to Bodh Gaya from Dharamsala. 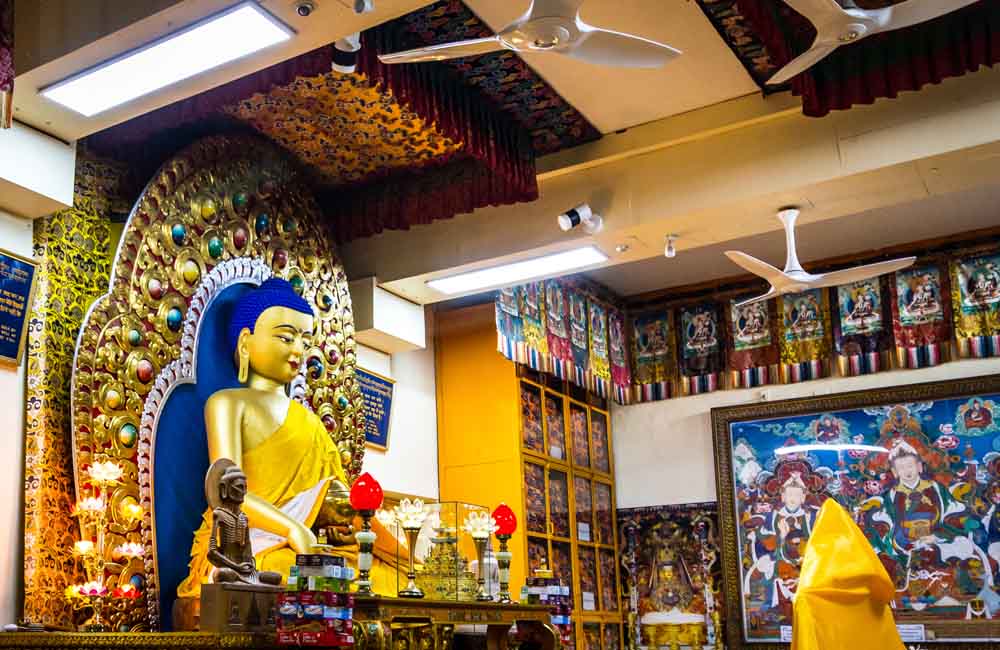 Steeped in natural beauty and serenity, Dharamshala is famed for being the abode of His Holiness, the 14th Dalai Lama. It is situated in the Kangra district of Himachal Pradesh, at the foothills of the mighty Dhauladhar Ranges. Dharamshala, which is also known as the Little Lhasa of India, is one of the best places to experience the Tibetan culture in the country. The hill station is dotted with many beautiful and peaceful monasteries that are perfect for those looking to meditate amidst lush green surroundings.

Among the many monasteries here, Namgyal Monastery in the Tsuglagkhang Complex holds special significance for being the residence of the Dalai Lama. The place also serves as an important centre of learning and meditation for the monks residing here. Other places radiating Zen-like peace and divinity in the hill station are Gyuto Monastery, Nechung Monastery and Library of Tibetan Works and Archives, among others. 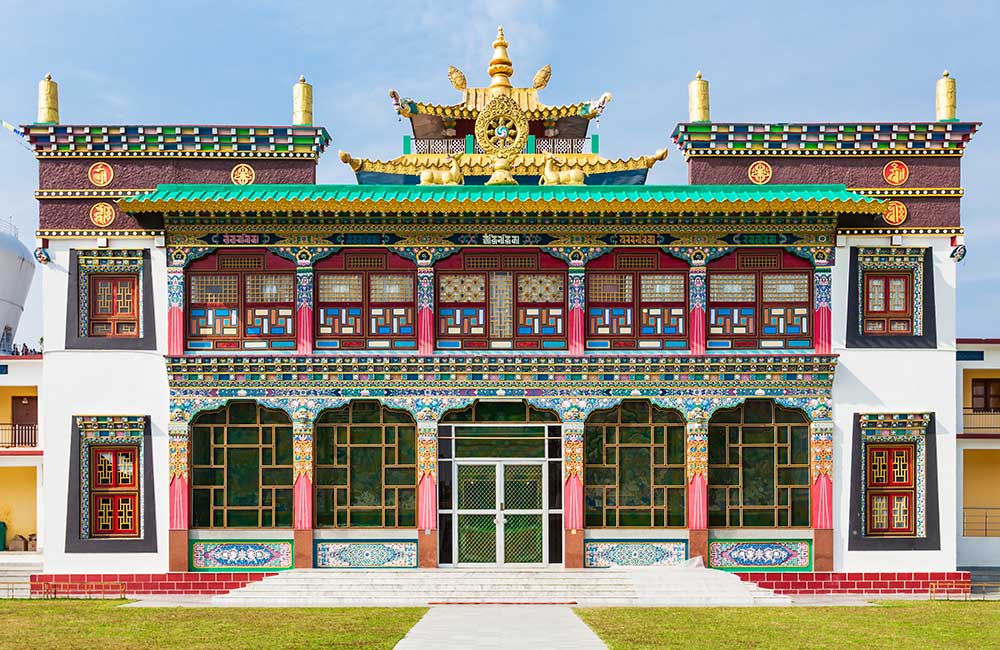 Located at the foothills of the majestic Himalayas, Mindrolling Monastery is one of the most important holy places of Buddhism in the country. The site is also known as Buddha Temple Complex and frequented by Buddhists from across the globe. Mindrolling Monastery was built in 1965 and is a part of the Nyingma School of Buddhism. It is counted among the most significant and largest Buddhist centres in the world; many individuals attain spiritual bliss here every day.

Showcasing the Japanese style of architecture, the monastery is a sight to behold. It has a total of five floors, with statues of Lord Buddha and Guru Padmasambhava inside. The first three floors are adorned with eye-catching golden wall paintings, showcasing the life of Lord Buddha. The fourth floor has an open platform from where you can enjoy mesmerising views of Dehradun Valley. The 220-feet high and 100-feet wide Stupa, also known as the Great Stupa, is a major attraction here. The monastery is also known for housing a 130-feet high statue of Lord Buddha. 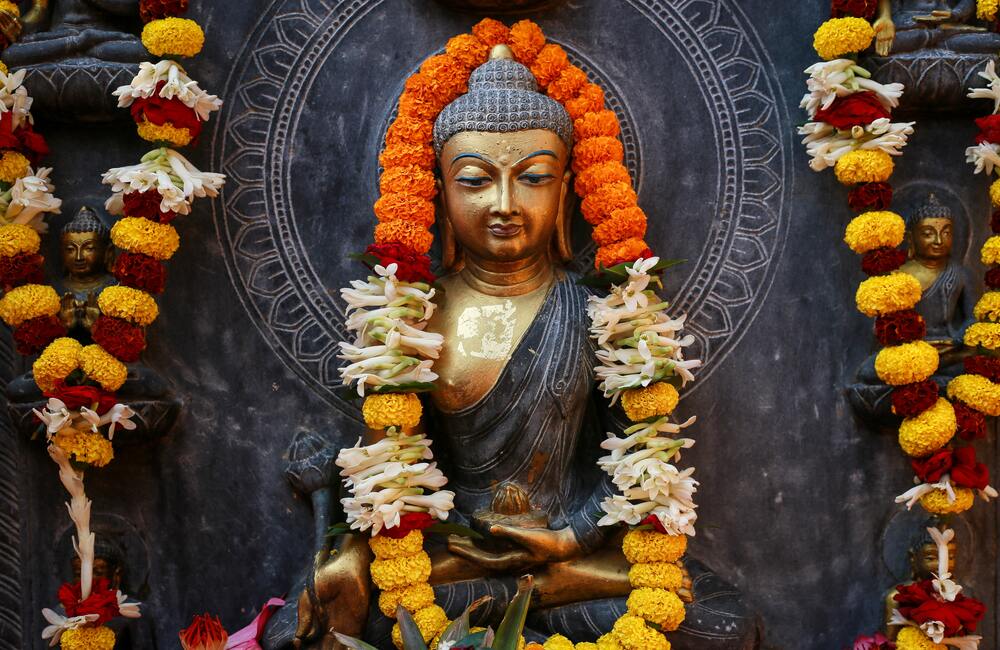 Holding great significance among the followers of Buddhism, Kushinagar in Gorakhpur is the place where Lord Buddha attained Mahaparinirvana. After Lord Buddha died, Emperor Ashoka built a Stupa here to denote the exact spot of his Mahaparinirvana. The Stupa, which is popularly known as Mahaparinirvana Temple, has a 6-feet long statue of Lord Buddha reclining on the right side. This Buddha temple makes Kushinagar a prominent pilgrimage site in the country.

Kushinagar also has a 49-feet long stupa, called Ramabhar Stupa, in the form of a large brick mount. This stupa is built in the place where Lord Buddha was cremated. This religious town is also home to Wat Thai Temple, Matha Kuar Shrine and many small temples and monasteries run by Buddhist nationals. Kushinagar organises a grand fair on Buddha Purnima every year and attracts many tourists and pilgrims from across India. 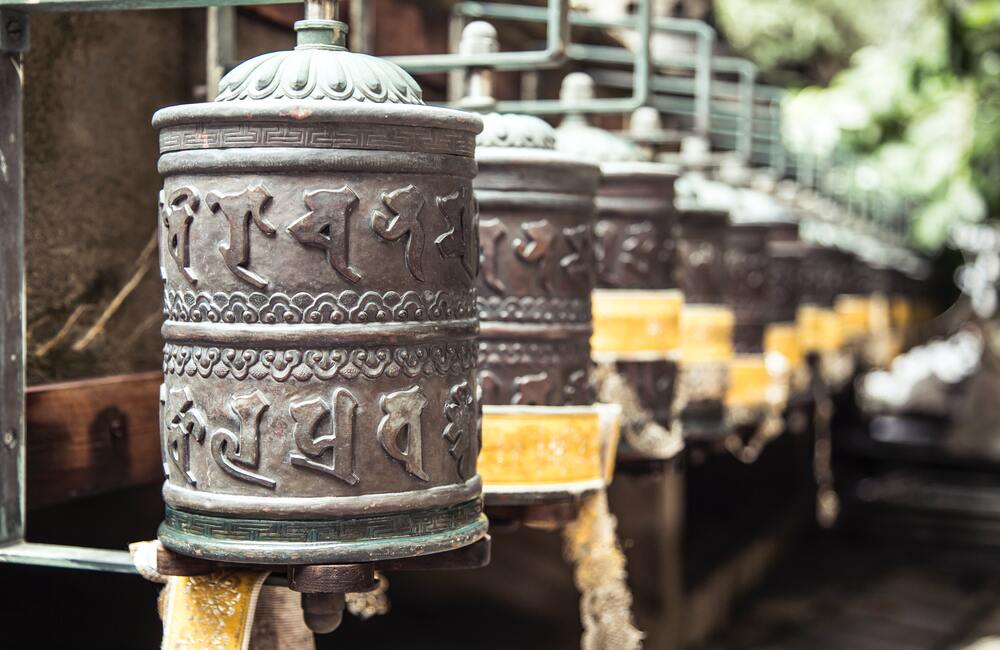 Sarnath near Varanasi is one of the most important holy places of Buddhism in India. This small town is the place where Lord Buddha gave his first sermon five weeks after he attained enlightenment. What’s more, it was Sarnath where the celebrated mantra “Buddham Sharanam, Ganchami” originated. The town has many ancient Buddhist sites as well as other places of spiritual significance if you are planning a religious trip. From Buddhist stupas and temples to museums and excavated ancient sites, there are many places to explore in Sarnath.

Famed for being one of the holiest sites for Buddhists, Sarnath is frequented by the followers of Buddhism round the year. This serene town boasts some ancient monasteries and stupas that add a distinct charm to the place and make it a must-visit. Some popular ancient structures here include Dhamek Stupa, Chaukhandi Stupa, Ashoka Pillar, The Mahabodhi Society Temple, and Tibetan Temple, among others. Sarnath is also known for its grand Buddha Purnima celebrations every year.

Explore recommended places to stay in Varanasi at best price 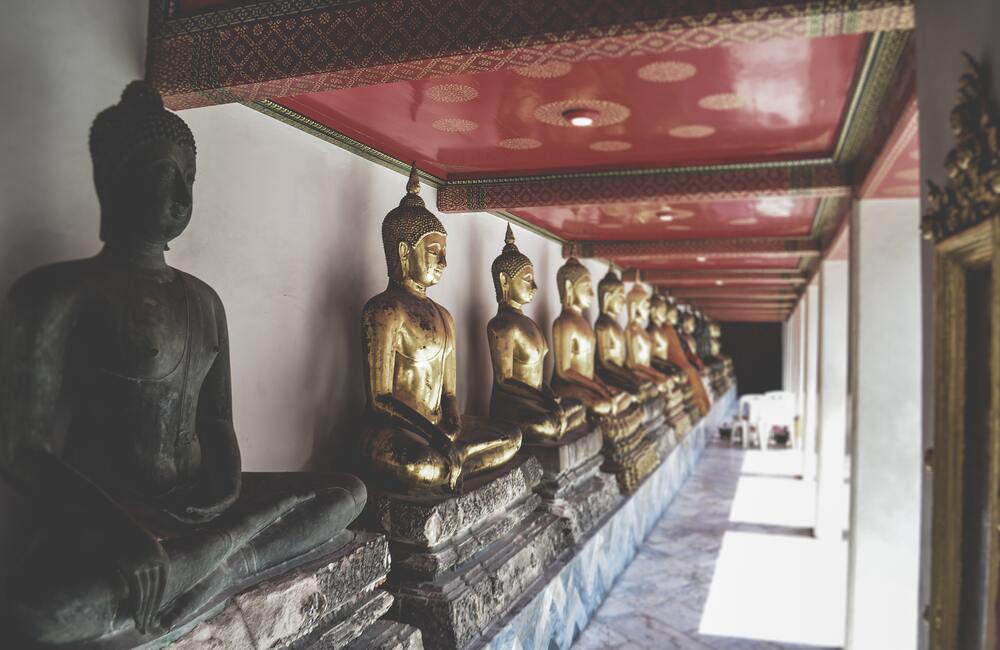 Located in the heart of Uttar Pradesh is Shravasti, one of the most important cities from Gautam Buddha’s era. The place is particularly famous for housing an ancient Bodhi Vriksh, called Anand Bodhi tree, which was planted by one of the main disciples of Lord Buddha. The calmness of the tree makes it one of the most preferred spots among Buddhist pilgrims for deep meditation.

The town also has some revered and beautiful monasteries and stupas that are worth visiting. Anathapindika Stupa, Angulimala Stupa and Jetavana Monastery are popular places to meditate and practice Vipassana. In case you are looking to learn meditation from well-experienced meditators, you must visit the Vipassana Meditation Centre here for different courses. Apart from Buddhists, Shravasti is a sacred place for Hindus and Jains as well. 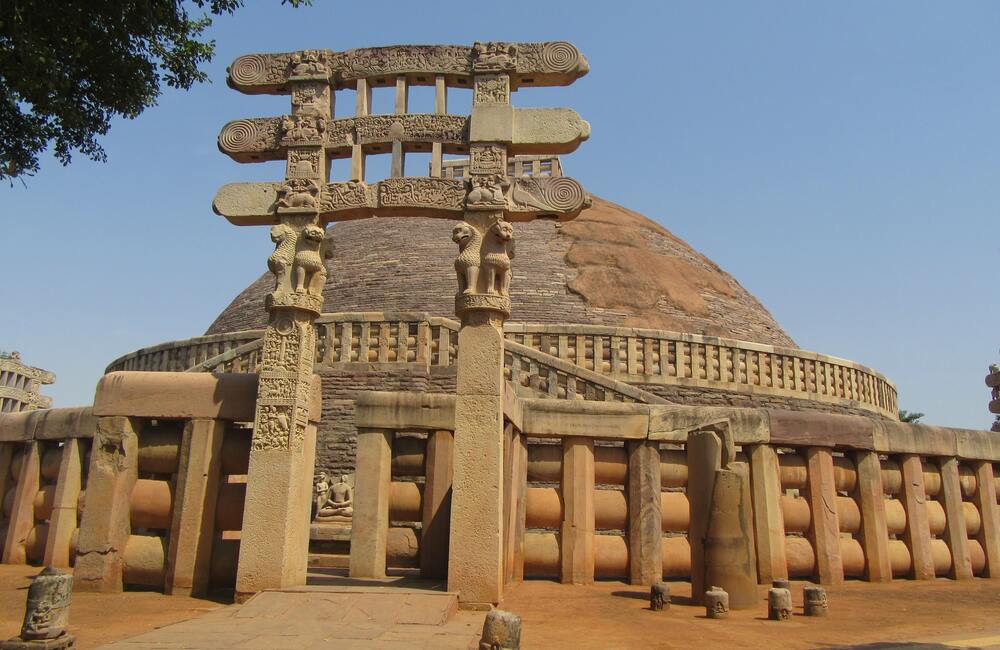 Situated near Bhopal in Madhya Pradesh, the historic site of Sanchi is known for housing some of the oldest Buddhist stone monuments in India. However, it is the Great Sanchi Stupa that tops the list. Located on a hill, the 50-feet high stupa with a 37 m wide hemispherical dome was built by Emperor Ashoka of the Maurya dynasty in the 3rd century. It is home to many important Buddhist relics as well as the ashes of Lord Buddha. A beautiful example of India’s artistic and architectural history, Sanchi Stupa was declared a UNESCO World Heritage Site in 1989. 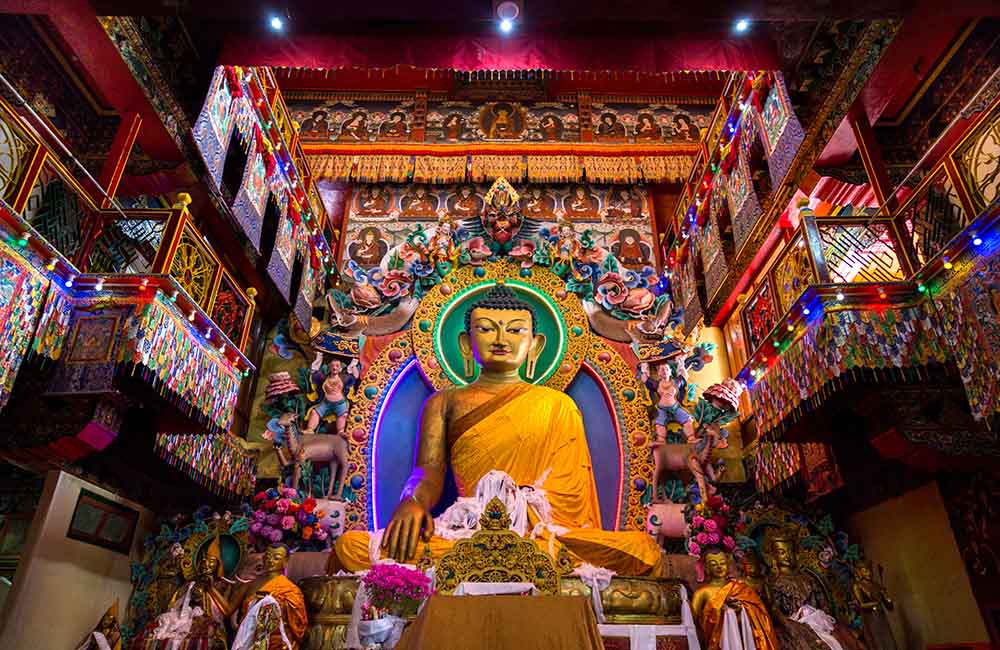 Peppered with many beautiful and peaceful monasteries, Tawang is yet another important Buddhist pilgrimage place in India. It is believed that the sixth Dalai Lama, Tsangyang Gyatso, was born in this hill station. While the place is dotted with monasteries, the revered Tawang Monastery is the most sacred for Buddhists. This 400-year-old monastery is located at a height of 3000 m and home to over 300 monks. It is also famed for being one of the largest monasteries in the country. This scenic and serene hill station exudes major spiritual vibes and is a must-visit Buddhist pilgrimage site. 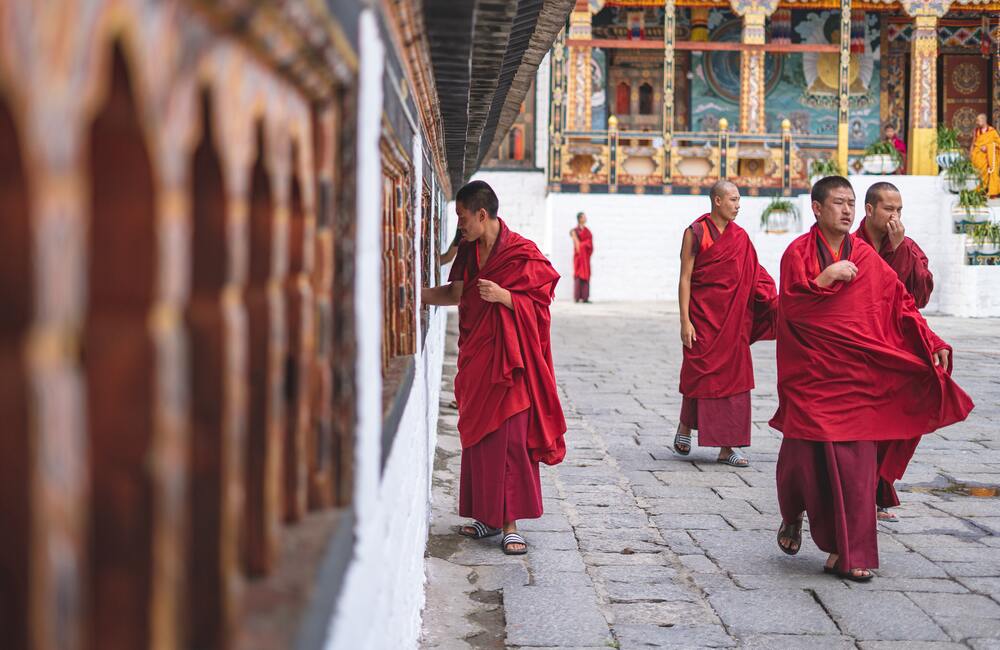 Situated near Patna, on the banks of River Ganga, Vaishali is the place where Lord Buddha delivered his last sermon. Hence, this small district in Bihar is extremely significant for Buddhist monks and pilgrims. To commemorate this important event, Emperor Ashoka even erected a huge Ashoka Pillar here. It is believed that Gautam Buddha visited Vaishali regularly after attaining enlightenment. 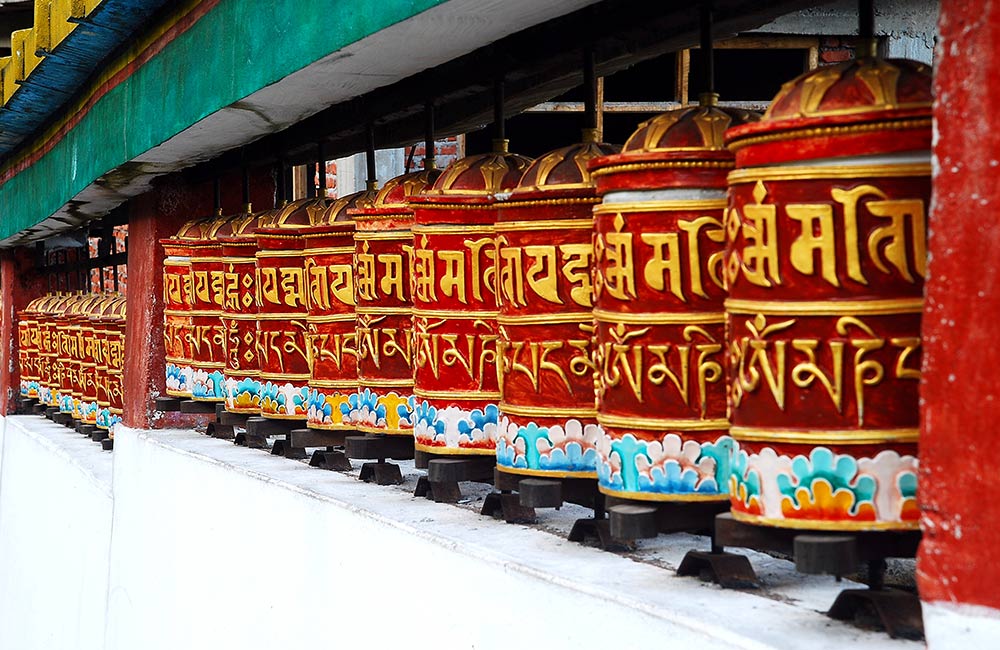 Popularly known as Dharma Chakra Centre, Rumtek Monastery is one of the most significant Buddhist pilgrimage places in India. It is located 1500 m above sea level and surrounded by lush green hills and abundant natural beauty. What’s more, the monastery offers breath-taking views of the entire Gangtok town.

This beautiful place boasts striking architecture and was established to spread the teachings of Lord Buddha around the world. It has a shrine temple, a monastery, a golden stupa and some sculptures of the 16th Karmapa. The prayer hall on the ground floor of the main monastery is adorned with beautiful murals, thangkas and statues. The top floor has a terrace and a small stupa. All in all, Rumtek monastery is a perfect blend of aesthetics and spirituality.

Apart from these, some other beautiful Buddhist sites in India are worth visiting too, such as Leh Ladakh (Jammu and Kashmir), Spiti Valley (Himachal Pradesh), Namdroling Monastery (Coorg) and Rajgir (Bihar). So, whether you are planning a leisure trip or a religious one to any of these states or places, make sure you take time to explore these holy places of Buddhism.

Explore recommended places to stay in Gangtok at best price