15 Amazing Places to Visit in Udupi

With a beautiful coastline, more than its fair share of picturesque locales and a cuisine to die for, Udupi is one of the most amazing tourist destinations in Karnataka. Though often overlooked for the more popular cities on the west coast, Udupi has a wealth of attractions that make up for a fabulous vacation with family or friends. So why not plan a trip to one of India’s best-kept secrets on the tourist trail down south? Book your hotel in Udupi, pack your bags and set out to explore the best that this beautiful city has to offer.

Read on to know more about the top places to visit in Udupi that you must include in your itinerary: 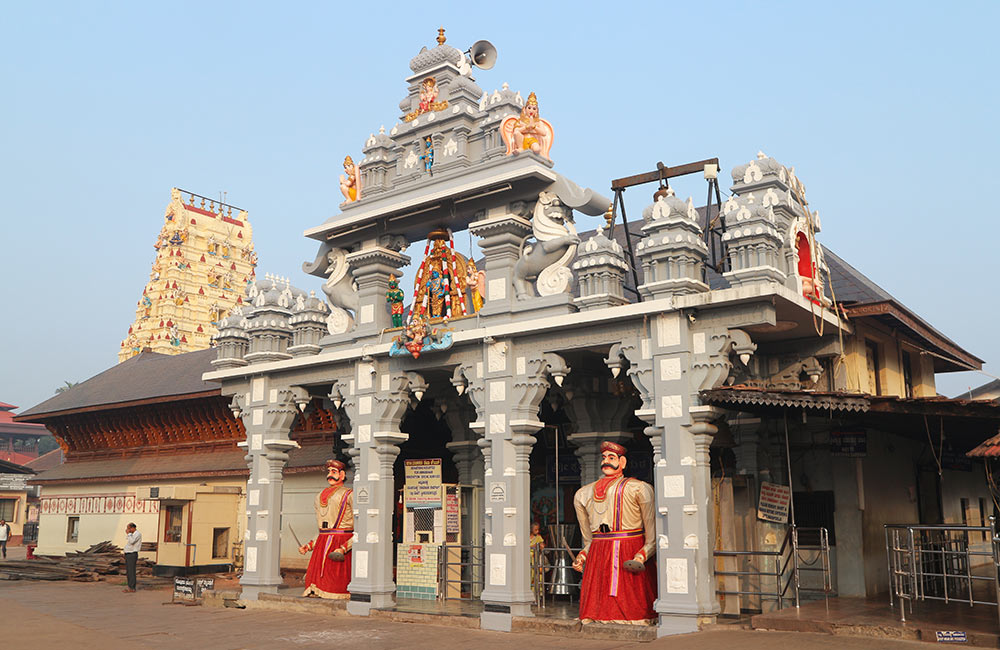 Sri Krishna Temple | #1 of 15 Places to Visit in Udupi

One of the best places to visit in Udupi is the 13th-century Sri Krishna Temple, founded by the Vaishnavite seer, Saint Jagadguru Sri Madhvacharya. Devotees get darshan of the Krishna idol installed in this temple through a silver-plated window called ‘Navagraha Kindi’. There is also a sacred pool at this shrine where devotees take a dip before paying their respects to the deity.

Also known as Sri Krishna Math, this temple is known for its ‘Dvaita Philosophy’ and is an important centre of Daasa Sahitya – a form of literature with roots in the Udupi region. 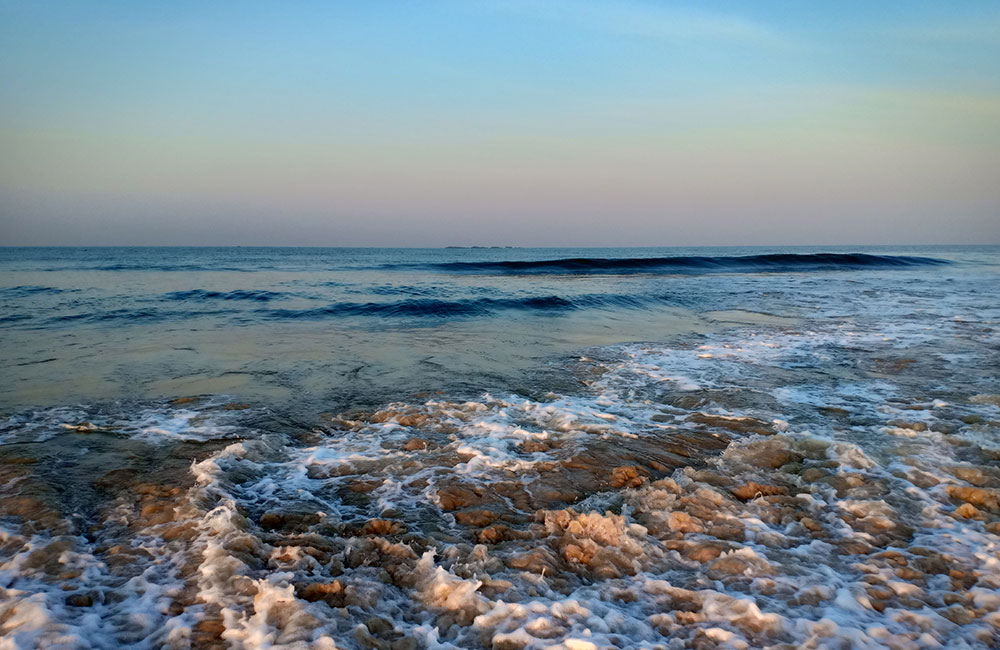 A natural port and home to the Mogaveera folk community of fishermen, Malpe Beach is one of the most popular places to visit in Udupi. The beach, also fondly known as ‘Malapu’, is frequented for its clean sands and stunning sunsets, thrilling water sports and more often than not, a trip to the St. Mary’s Island.

Just 5.7 km from the city, Malpe Beach is great for a day out with the whole family or gang of friends. 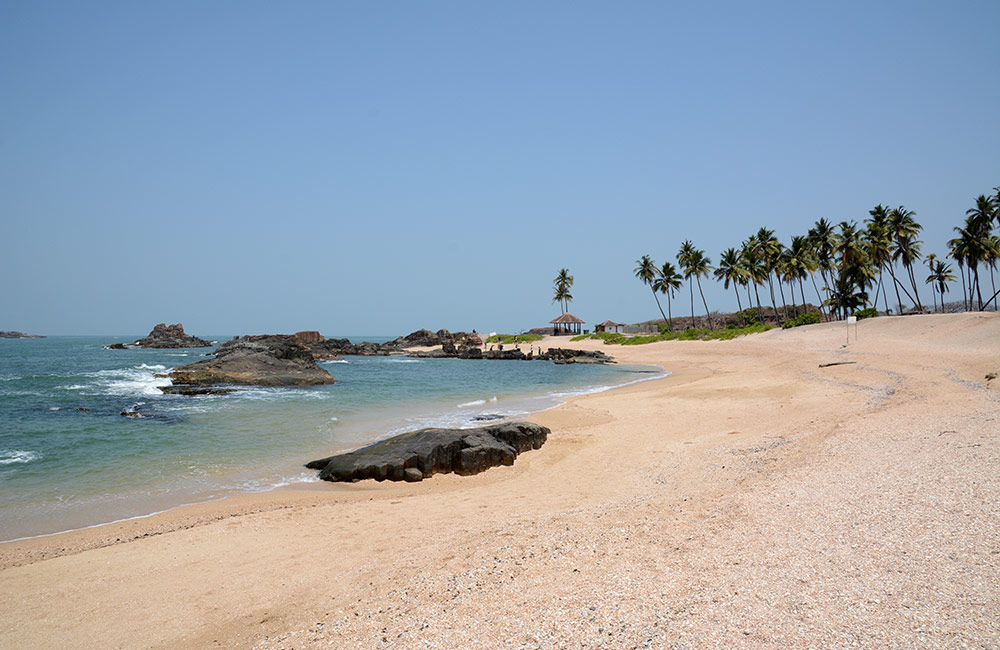 Legend has it that St. Mary’s Island is where Vasco da Gama landed on his journey from Portugal to India. This uninhabited island is actually a tiny archipelago of four islands, namely Coconut Island, North Island, Darya Bahadurgarh Island and South Island.

The island is famous for its interesting basaltic rock formations, believed to have been created by volcanic activity. The pillar-like rocks are hexagonal and may be relics from the time Madagascar was attached to India. Listed as a geological monument by the GSI, the rocks look majestic standing out of the sea and are worthy of a visit when on a trip to Udupi. 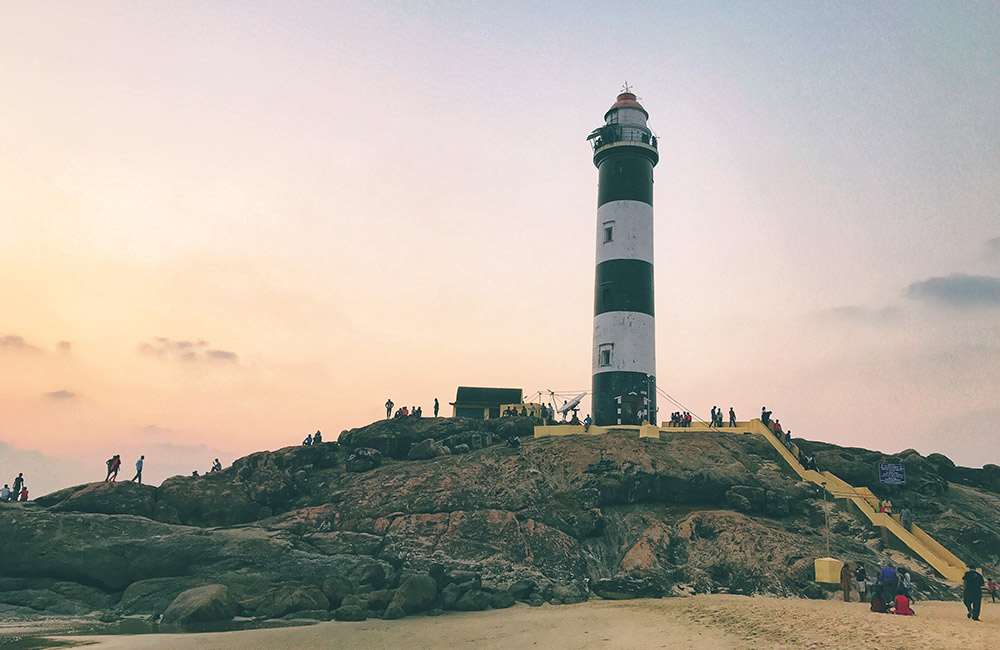 The first thing to do at Kaup Beach is to head to the lighthouse, built in 1901, and walk up the stairs to the viewing deck for absolutely stunning views of the Arabian Sea. One of the most exhilarating places to visit in Udupi, Kaup Beach is perfect for binging on some yummy coastal cuisine and drinks from the local shack, watching dolphins prance about in the sea and simply unwinding.

Located about 16 km from Udupi, Kaup Beach is also renowned for the Jain temples that are in ruins now and the two Hindu temples dedicated to the Goddess Mariamma. 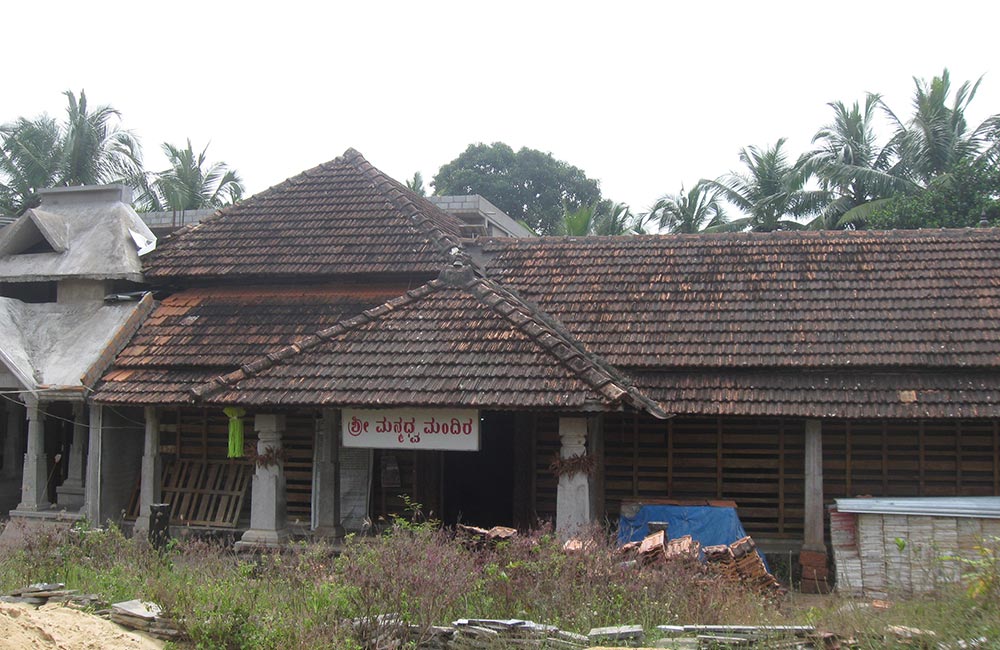 Located about 13 km from Sri Krishna Temple, Pajaka is another one of the must-visit places in Udupi. This small village has gained popularity for being the birthplace of Sri Madhvacharya, the founder of Sri Krishna Temple.

Some notable attractions here are the well-preserved house of the saint, an impression of his feet close to the house, a banyan tree believed to have been planted by him and a vidyapeeth where children learn Sanskrit and the Vedas. 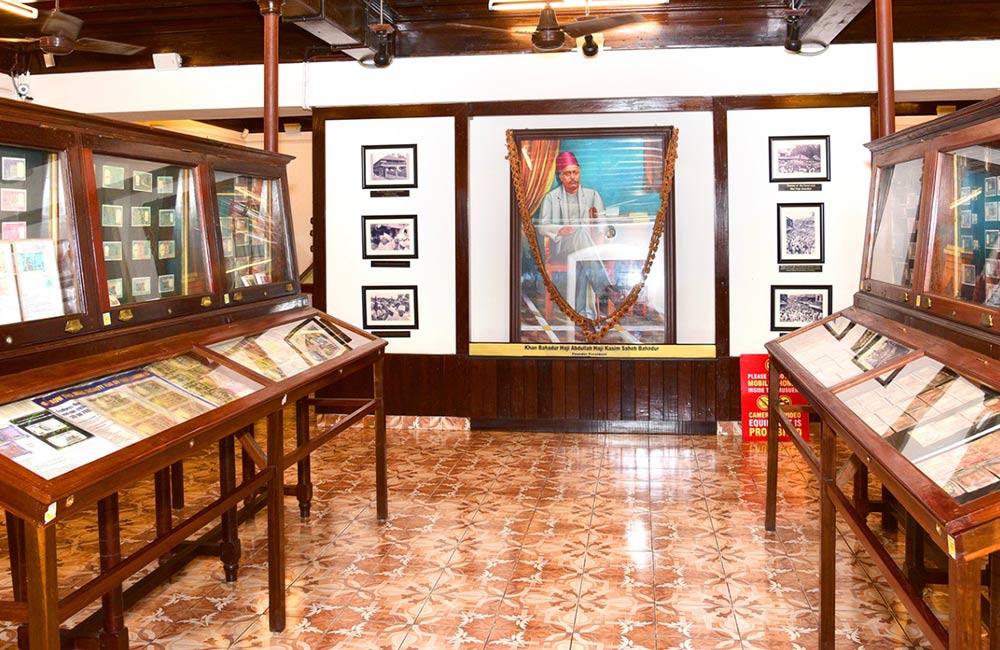 In a town of temples, Corporation Bank Heritage Museum is dedicated to all things financial. It is housed in a 125-year-old building that was originally the home of the bank’s founder but was later converted into a museum. Some interesting displays here include vintage coins from different time periods and countries and currency notes up until recent times.

One of the most unusual places to visit in Udupi, Corporation Bank Heritage Museum (also known as Coin Museum) also shares information about the history of banking in Dakshin Kannada. You can find resources like financial research centre and a credit counselling centre here as well. 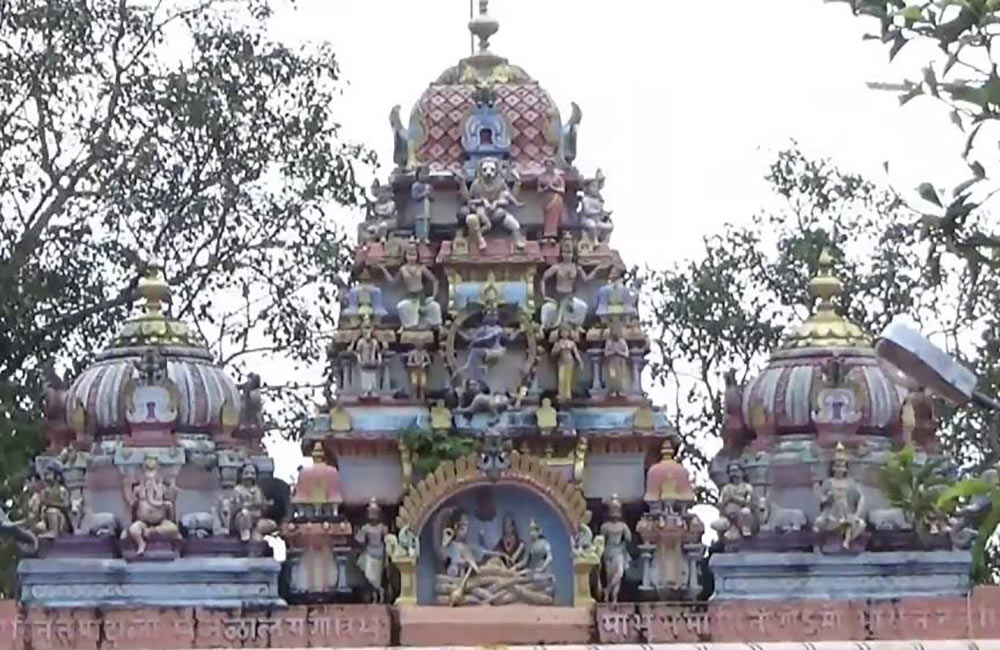 Ananteshwar Temple | #7 of 15 Places to Visit in Udupi

Dedicated to Lord Shiva, Ananteshwar Temple is one of the most popular religious centres in Udupi. Said to have been built in the 8th century by the Alupa dynasty, it is one of the oldest shrines in the Tulu Nadu region. This temple is where the celebrated Hindu philosopher and saint Sri Madhavacharya is said to have instructed his disciples in the Dvaita philosophy.

The architecture is stunning and a testimony to the prowess of the architects and builders of times gone by, which is all the more reason to visit the shrine. 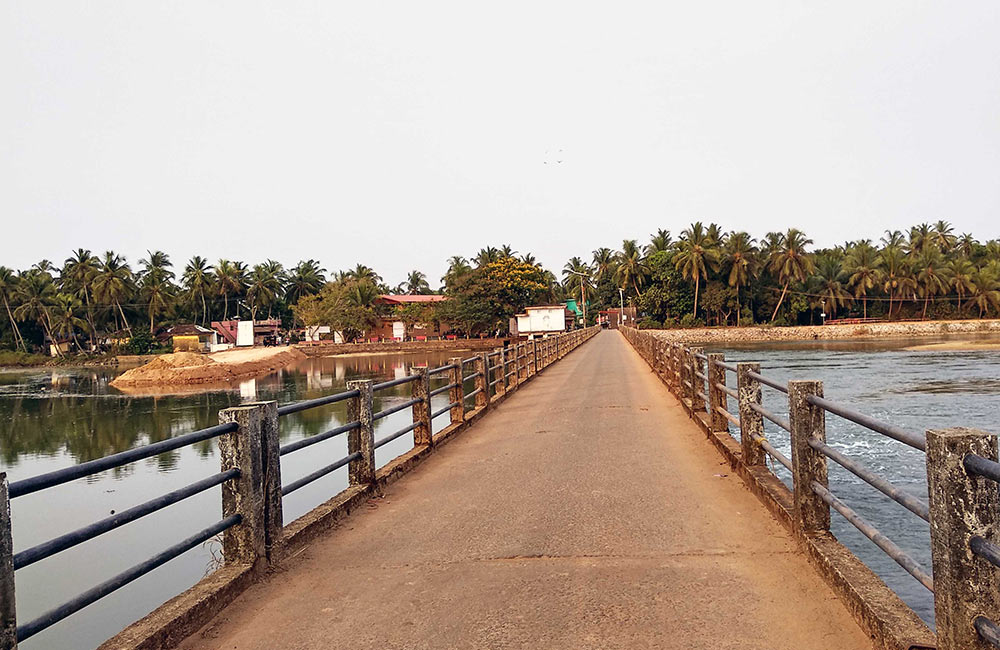 It’s a surprise how Mattu Beach has managed to stay below the tourist radar given its sparkling swathe of sand, mesmerizing views of the sea and calm backwaters. One of the lesser-known places to visit in Udupi district, Mattu Beach is a delightfully secluded spot about 10 km from the city centre.

On some days, you might see surfers besting the waves here but mostly you’d be on your own. If you plan to stay on after the sun sets into the Arabian Sea, you would be able to see something phenomenal at this beach – bioluminescence or Sea Sparkles! 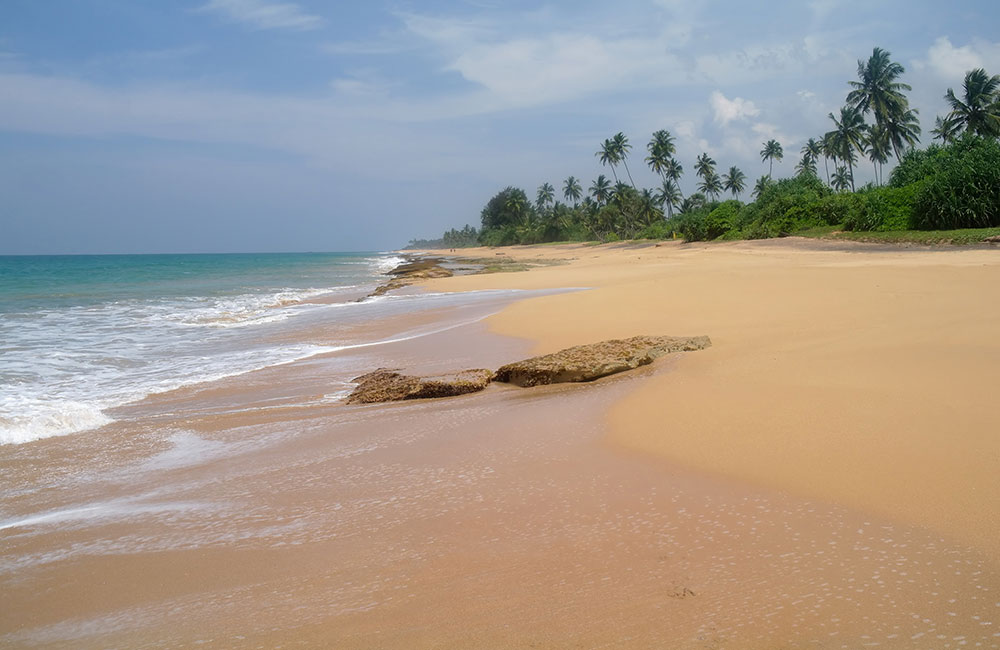 Padubidri Beach | #9 of 15 Beaches near Udupi

Padubidri Beach on the Karnataka coast is among the top places to visit during a trip to Udupi, frequented by families and youngsters. The beach, about 26 km from Udupi, is a clean and calm place to sit and enjoy panoramic views of the sea and the sun on its journey up and down the horizon. Several restaurants and food kiosks here sell awesome delicacies from the Kannada cuisine that are definitely worth a try.

Do make a trip to Padubidri End Point, where the river meets the sea, for some unforgettable views. 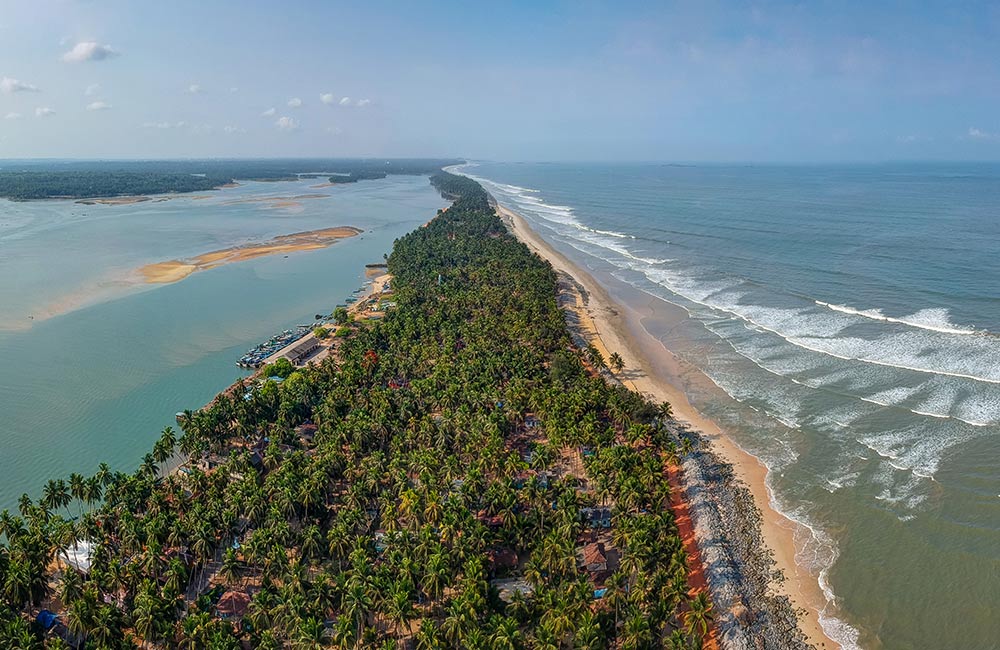 Clean sands, crystal clear waters and a brilliant sunset: that’s Kodi Bengare Beach, one of the lesser-known but beautiful places near Udupi. About 38 km away from the city, this beach is the estuary of the Suvarna River and popularly known as Delta Beach.

Tailor-made for beach bummers, Kodi Bengare Beach is secluded and peaceful, perfect for long walks and soaking in nature. There is a surf club close at hand if you wish to indulge in some surfing adventure. And when you get hungry, there are many shacks here selling amazing fish-based meals and toddy. Barkur | #11 of 15 Religious Places to Visit near Udupi

Barkur is actually a group of three smaller villages – Hosala, Hanehalli, and Kachoor, and is one of the most visited places on Udupi tour. Known as the Village of Temples, Barkur looks truly beautiful with the mighty River Seetha flowing through it.

Located approximately 18 km from Udupi, Barkur was once the capital of the ancient Alupa Kingdom. You can find several archaeological artefacts here including stone and copper plate inscriptions along with the remains of temples, palaces and forts – all worthy of a visit. 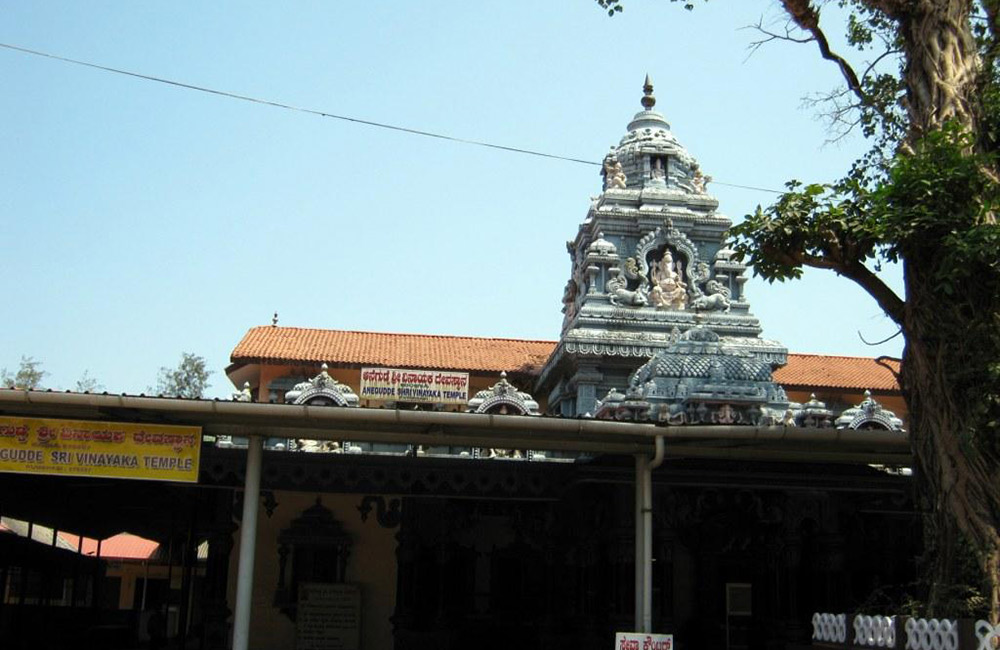 Located in the small but picturesque village of Anegudde, this shrine is dedicated to the elephant God, Sri Vinayaka. Some 30 km from Udupi, Anegudde Vinayaka Temple is known for its religious significance and has an interesting legend attached to it.

As revealed by Sri Vadiraja Tirtha (a famous Dvaita philosopher) in his epic Theertha Prabandha, this is the site where sage Agastya performed a yajna to relieve the villagers of a long drought. Demon Kumbhasura repeatedly disrupted the proceedings until Bheema, the Pandava prince, slayed him with his sword given by Lord Vinayak. The Lord thus became the protector of the area. 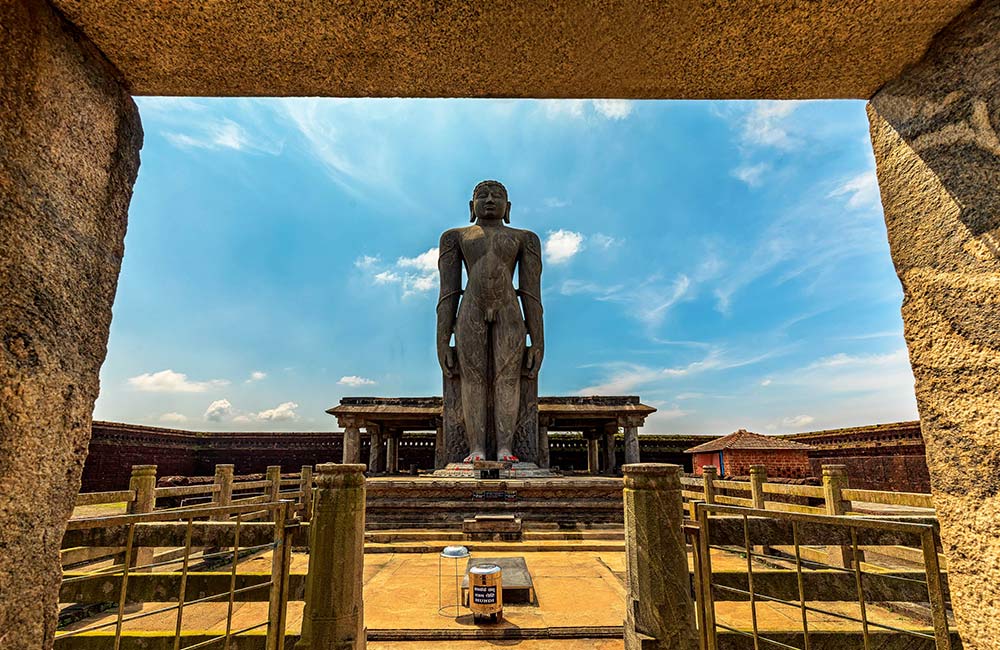 Karkala | #13 of 15 Religious Places to Visit near Udupi

About 40.5 km from Udupi is the small town of Karkala, famous for its massive statue of Gomateshwara or Lord Bahubali. Having remained under the Jain rule for nearly 300 years, this town has a wealth of Jain monuments like Chaturmukha Basadi that you can visit from Udupi.

If you are lucky, you could be here during ‘Mahamastakabhisheka’, a spectacular religious event that takes place every 12 years. Karkala is also blessed with thickly forested hills that attract trekking enthusiasts and several lakes where you could spend an unhurried day with loved ones. 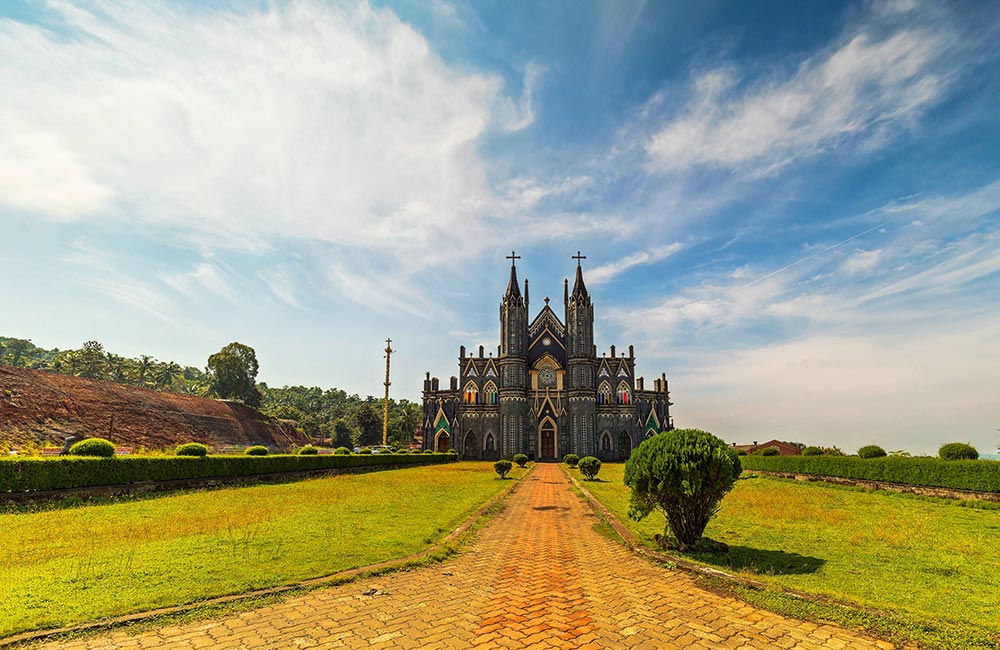 Lawrence Church | #14 of 15 Religious Places to Visit near Udupi

The stunningly beautiful St. Lawrence Church, located about 41 km from Udupi, is definitely a must-visit if you can take out time from exploring Udupi. The starting point of the vibrant and well-attended ‘Attur Jatre’, St. Lawrence Church is dedicated to the 3rd-century saint, Lawrence.

The church was built in 1759 and boasts of an impressive building with a storied past. The interior of the church is adorned with painted columns, beautiful murals on the walls and a large nave. Interestingly, the church is believed to be a place of miracles that welcomes people of all faiths. 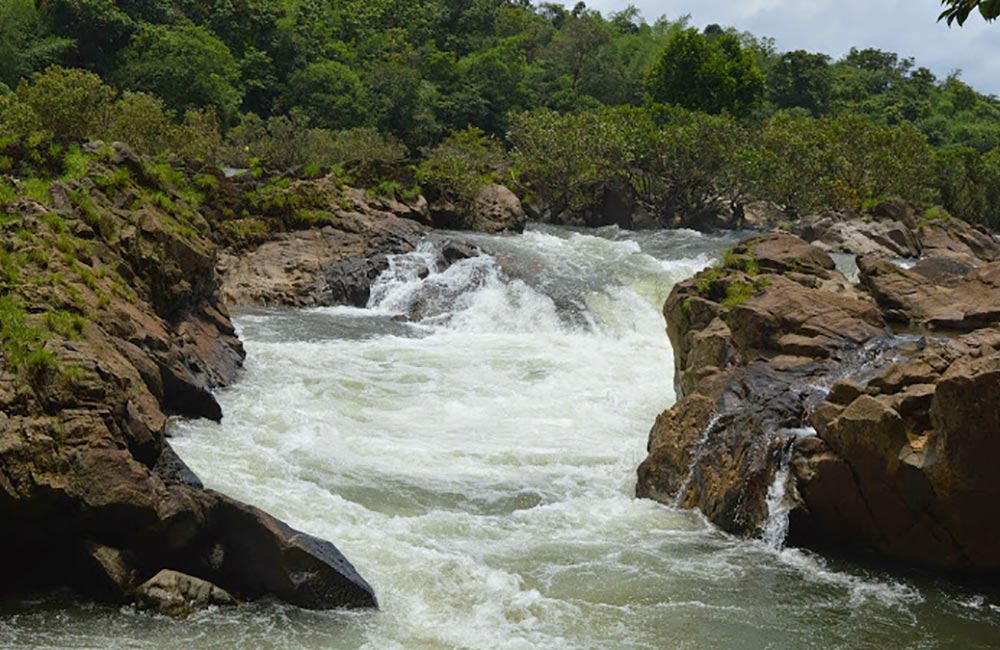 Jomlu Theertha | #15 of 15 Waterfalls near Udupi

Studded like a gem in the dense forest of Someshwara Wildlife Sanctuary, about 25 km from Udupi, is the Jomlu Theertha. Formed by the River Seetha, this waterfall is a magnificent sight cascading down the rocks from a height of nearly 20 meters. Frequented by families and youngsters looking for a change from cities, Jomlu Theertha is perfect for picnics, swimming or just spending a few hours in the arms of nature.

Some other places to visit in Udupi district are Kudlu Theertha Falls, Achakanya Falls, Uppinakudru Island, Museum of Pathology and Anatomy in Manipal and the Daria Bahadurgad Fort. If you were looking for an offbeat destination, try this scenic region in Karnataka and you will be surprised at what it has to offer.