11 Top Places to Visit in Vellore

Home to one of India’s best-kept military forts, a lavish temple made of gold and many attractions that enrich the history of South India – Vellore is a hidden gem on India’s tourist trail. With many places to visit in Vellore, a large number of good hotels in Vellore and great weather (mostly!), this historic city is only just picking up on the tourist itinerary. Interested? Read on to find out what attractions await you in this beautiful city.

Places to Visit in Vellore: 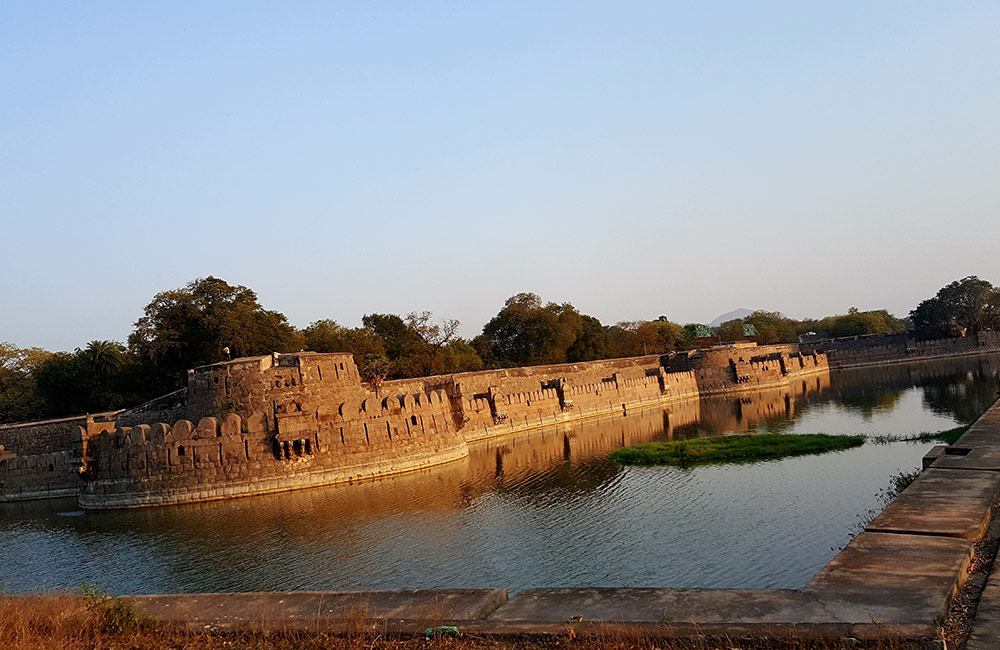 Vellore Fort | #1 of 11 Places to Visit in Vellore

Considered to be one of the finest examples of military architecture in the country, the Vellore Fort was built during the reign of Vijayanagara kings, in the 16th century. One of the most popular places to visit in Vellore, the fort is filled with stories of intrigue, has housed royal POWs, passed hands between various dynasties, seen mutinies and massacres and still stands strong. Well maintained by the ASI, this double-walled granite fort will regale you with its majestic ramparts, impressive bastions and a moat that, legend says, was once filled with crocodiles! Several other structures inside the fort are also worth a visit – Jalakandeshwarar Temple, the ASI Museum, Tippu Mahal, Begum Mahal, Kandi Mahal and St. John’s Church. 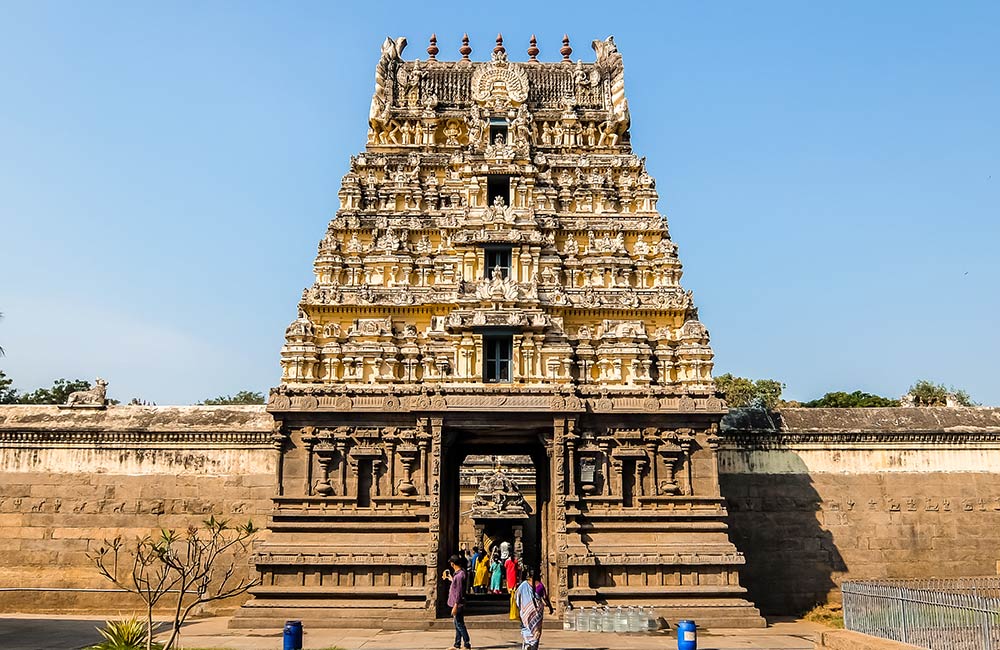 Jalakandeshwarar Temple | #2 of 11 Places to Visit in Vellore

Located inside the Vellore Fort, the Jalakandeshwarar Temple is traditionally among the places to visit in Vellore when you come to be regaled by the fort. The temple’s name (Jalakandeshwarar) means ‘Lord Shiva residing in the water’, and is believed to have been built by the 16th-century Vijayanagara chieftain – Chinna Bommi Nayaka – on an anthill that was surrounded by water, following a dream he had. The shrine is a fine example of the grand Vijayanagaram architectural style and visitors are enthralled by the temple’s intricately carved gopuram and pillars, monoliths, a stunning mandapam (central area) and the equally beautiful idols of the deity and his consort.

Lying on the southern edge of the Vellore Fort is the relatively new Periyar Park; one of the most beautiful places to visit in Vellore. The park is funded by the Department of Tourism of the GOI and has a wealth of attractions within itself – a lush, green lawn filled with flowering plants, a cycling path, a colourful fountain and a reservoir. If you’re traveling with kids, you must definitely make a stop here for its roller-skating rink and battery-operated mini-vehicles for the little ones.

A relic of the British Raj, the Anglican St. John’s Church was constructed in 1846 to service the officers and soldiers of the East India Company occupying the Vellore Fort at that time. Managed by the ASI today, the church is home to a cemetery for the fallen British soldiers of the 1806 Vellore war of Independence. One of the oldest churches in the Vellore Diocese, the St. John’s Church has simple, yet functional interiors and holds within itself many stories, just waiting to be discovered. So if you’re a history buff, this is one of the must-visit places to visit in Vellore for you.

Situated inside the Vellore Fort, the ASI Museum occupies space in the Badhusha Mahal and Begum Mahal buildings. Among its many treasures is a stunning revelation (for most people, anyway) – a copy of a report written about the Vellore sepoy mutiny – India’s First War of Independence that preceded the more celebrated one in 1857 by almost half a century! There are more than 2800 exhibits spread across 8 galleries and you must also see the stone sculptures from the Pallava, Nayaka and Chola dynasties and a plaque showcasing the evolution of the Tamil language over centuries and wood and metal artefacts.

Founded by the Government of Tamil Nadu, the Science Park in Vellore offers four different galleries – Physical Science, Hall of Discovery, Environment and Industry. Not many tourists would put the Science Park on their list of places to visit in Vellore but we’d recommend it, especially if you are traveling with kids. Of note here is the Energy Ball exhibit that will mesmerize you with its workings which explain the conversion of energy. The most enjoyable part for kids, though, would be a visit to the recently opened 3D Science Theatre inside the Industry Gallery – here they can watch science based movies, films on pre-historic times and feature-length shows that explain the science behind magic tricks.

One of the most impressive places to visit in Vellore is the gilded Sripuram Golden Temple, located at the foothills of the Thirumalaikodi, a small range about 8 km from Vellore. The main attraction here is the lavish Lakshmi Narayan Temple dedicated to Sri Lakshmi Narayani, Vishnu’s consort and the goddess of wealth. No wonder then that a shrine dedicated to her would be literally carved out of pure gold…100 kg of it! A spectacular structure, the temple is adorned with intricate, handcrafted designs made out of gold which makes it a unique attraction in the city.

Dedicated to Lord Murugan or Kartikeya – the son of Shiva and Parvati – and the Hindu god of war, Sri Murugan Temple dates back to the 14th century. An important religious place to visit in Vellore, the temple is believed to be located at the place where Kartikeya resided when he descended from the Mount Kailash. The temple is visited by devotes and tourists both who believe that idol blesses true prayers here. A beautiful and serene shrine, it can be accessed by climbing a set of 150 stairs.

In Javadi Hills, about three hours’ drive away from the Vellore city is the serene Amirthi Zoological Park lying in an expanse of 25 hectares. A popular place to visit in Vellore, the zoo is home to many spotted deer, foxes, apes and birds. The area is lush with thick forests and you can also see several herbal and medicinal plants here. While here, you could also trek to a natural waterfall or spend the night in the forest in one of the 2 rest houses – both experiences would be awesome for city dwellers like us.

If the ruins of the French Bungalow could speak, they’d tell you tales of grandeur, of the lives of Srinivasa Iyer, a prince of the Royal Mysore family and his French wife whom he met while studying in France. Built in Indo-French architectural style, the bungalow is a popular attraction and one of the most interesting places to visit while in Vellore. You can guess how awesome it would’ve been at one time judging by its floral tiled walls, its carved columns and a large well that served a Roman bath…decadent living, anybody?

Here’s another one for the kids – the Vainu Bappu Observatory in Kavalur – where they can stargaze with the help of a 16-cm telescope…sounds like immense fun, isn’t it? Owned and operated by the Indian Institute of Astrophysics, the observatory was set up here in 1960 and is responsible for discovering a minor planet in 1988, named 4130 Ramanujam for the mathematical prodigy – S. Ramanujam. Even though the place is about 2 hours away from the city (about 94 km), it is well worth a visit for the views of the night sky it affords. Do check online to see if the observatory is open to the public at the time of your visit.

There are several other rewarding attractions in the city or just a short road trip away – Yelagiri, a small hill station that is about 80 Km away, Muthu Mandapam or The Pearl Palace that lies within the city and the Varadaraja Perumal Temple – a tranquil place of worship, also within the city. Do you know of more attractions in Vellore that we may have missed out on in our list? Share them with us in comments below.