Everyone knows that Kolkata is one of the most important commercial centres of India, a historically significant place and a destination with extremely rich culture. If you are coming to Kolkata for business, then you must head out to visit the city’s attractions as a little sightseeing on a work trip hasn’t hurt anyone. Now, if you are a regular traveller, you would most probably visit its colonial monuments, temples and museums or indulge in retail therapy. But, if you are sort of daredevil, who likes horror movies and Gothic literature (think Sheridan Le Fanu’s Carmilla rather than Mary Shelley’s Frankenstein), you can check out some haunted places in Kolkata. And, my word, there are a lot of those here. Read ahead for the most famous ones.

Most Haunted Places in Kolkata

1. Howrah Bridge – The Lady in White 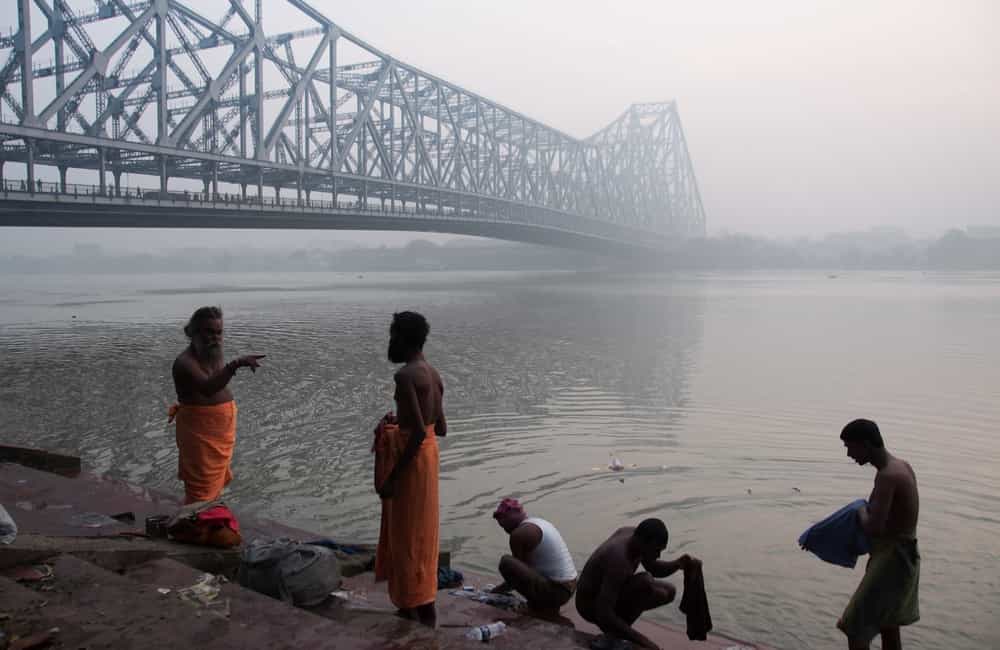 Howrah Bridge – The Lady in White (#1 out of 12 Best Haunted Places in Kolkata) (Photo Credits: Shutterstock)

One of the most iconic sights of Kolkata, the Howrah Bridge is also said to be a haunt of ghosts. Talk to the wrestlers who train under it, and some of these might tell you that they regularly see arms merging from the Hooghly River, unsure whether they belong to a human or a spirit. Some people might also recall seeing a sobbing woman in white robes, calling out to them in a nasal voice. Those who have heard it or tried to approach the figure have claimed to be traumatised. These spirits are said to be of those, who died of drowning in the river either accidentally or willingly. While ghosts are said to roam at most places at night, it is the morning which is claimed to be the most horrifying time here.

2. National Library – Ghost with an OCD 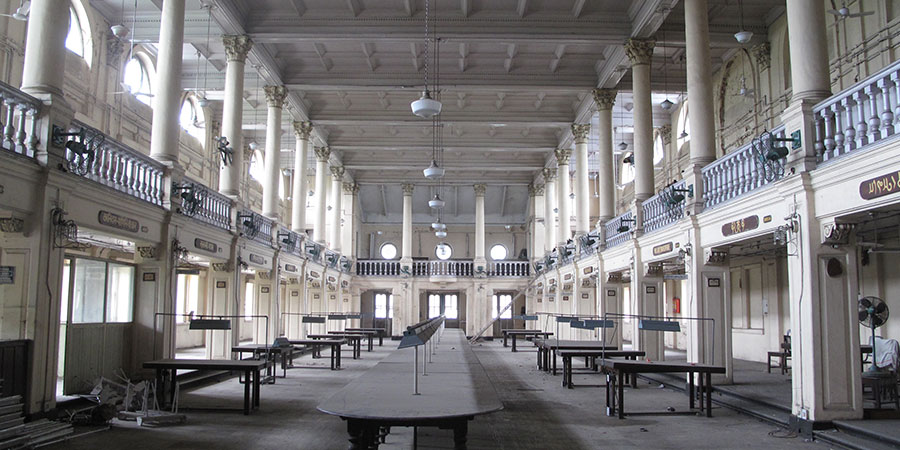 National Library – Ghost with an OCD (#2 out of 12 Best Haunted Places in Kolkata) (Photo Credits: NDTV)

The National Library in Alipore is another ghostly place in the city, if you believe such stories (personally, I find libraries to be the most depressing places on earth). Several people will tell you that they felt as if someone was breathing down their neck when they were reading alone. This feeling is said to be amplified if you don’t keep a book in its rightful place. Now, this is what I call a ghost with an Obsessive Compulsive Disorder so strong, which won’t die even after the person is dead. There have also been reports of people hearing footsteps near them, but seeing nobody. It’s not only readers, but even librarians have complained of seeing chairs being drawn away; chairs on which they were sitting along with hearing sounds of ruffling pages and books being dropped. The presence being felt is said to be of the wife of Charles Metcalfe, a former Governor-General of India. If you are staying at hotels in Alipore, then make it a point to explore this landmark attraction. 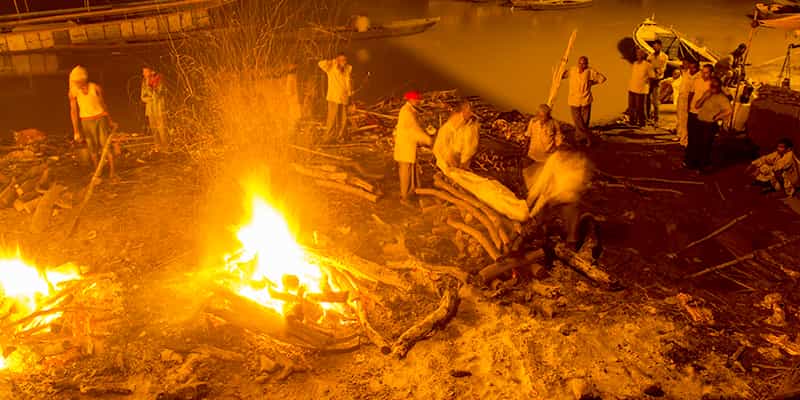 Nimtala Ghat is one of the oldest crematoria in Kolkata, and what better place to have been claimed as being haunted than one, where spirits are supposedly released from the body. Aghoris throng this ghat on the occasion of Kali Puja, wherein they eat the already burned corpses and smear the ash on themselves (a band like Gorgoroth or Cannibal Corpse could make an entire music video, showing them in the midst of human remains, eating off the dead). They are also said to invoke the goddess so that she possesses them. It might not be so scary an experience, but certainly one worth looking at. 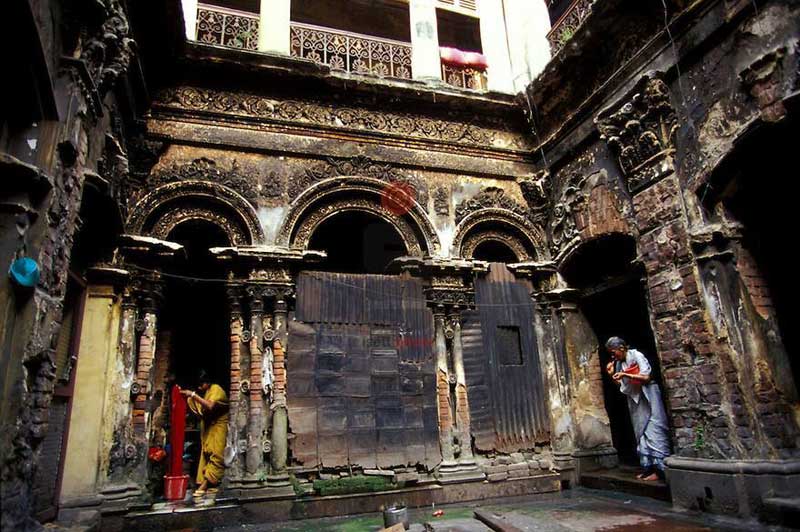 Dolls are cute, aren’t they? But, those who have seen The Conjuring, Annabelle, The Child’s Play series or even Dexter’s Laboratory episode, Dee Dee’s Room, wouldn’t be so sure. Want to be more skeptical than ever of dolls? Then, you got to visit Putulbari – The House of Dolls. Before you even feel a presence, dolls stacked up on stands in a grand Romanesque building will freak you out. There are residents in this house, but even they refrain from going to its upper floors. It is said that wealthy landlords who lived in this haunted house in Kolkata in the olden days had sexually assaulted and killed several women here, who now roam here as ghosts. Some people have heard women laughing and anklets clinking even when there was no one there except for them. If you are brave enough to walk to the upper storeys, you might earn a whole new respect for yourself. 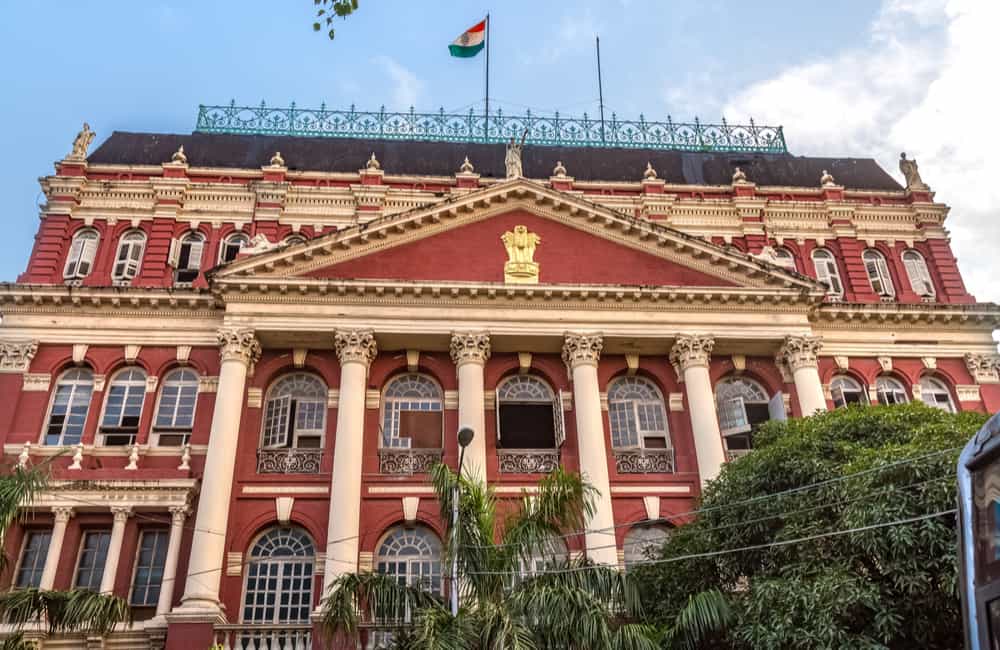 The Writer’s Building in Binoy Badal Dinesh Bagh is a place where the dead man apparently walks (not talking about The Undertaker). The person being mentioned is Captain Simpson of the East India Company, who was murdered here by revolutionaries during the struggle for independence. It is his ghost, which apparently walks here at night. Caretakers say that they heard shriek-like noises late in the night, even though the building is closed for people at 7:00 pm. No caretaker, it is claimed, has been able to continue his job for more than 24 hours!

6. The Royal Calcutta Turf Club – The Fallen shall Rise

The Royal Calcutta Turf Club – The Fallen shall Rise (#6 out of 12 Best Haunted Places in Kolkata) (Photo Credits: Deer Park)

It is not just men and women who apparently roam around as ghosts in Kolkata, but also horses. Such a spectacle locals claim to have seen at The Royal Calcutta Turf Club; a white horse (think Shadowfax) racing on the tracks under a full moon. The horse, it is supposed, is Pride, who belonged to a British horse racing enthusiast George Williams. It won its owner many races, and with it, immense fame and wealth. But, one day, it lost a race as it had gotten older. The next day, it was found dead on the tracks (makes me think of that scene in The Godfather, where a horse’s head is lying in bed with its owner). 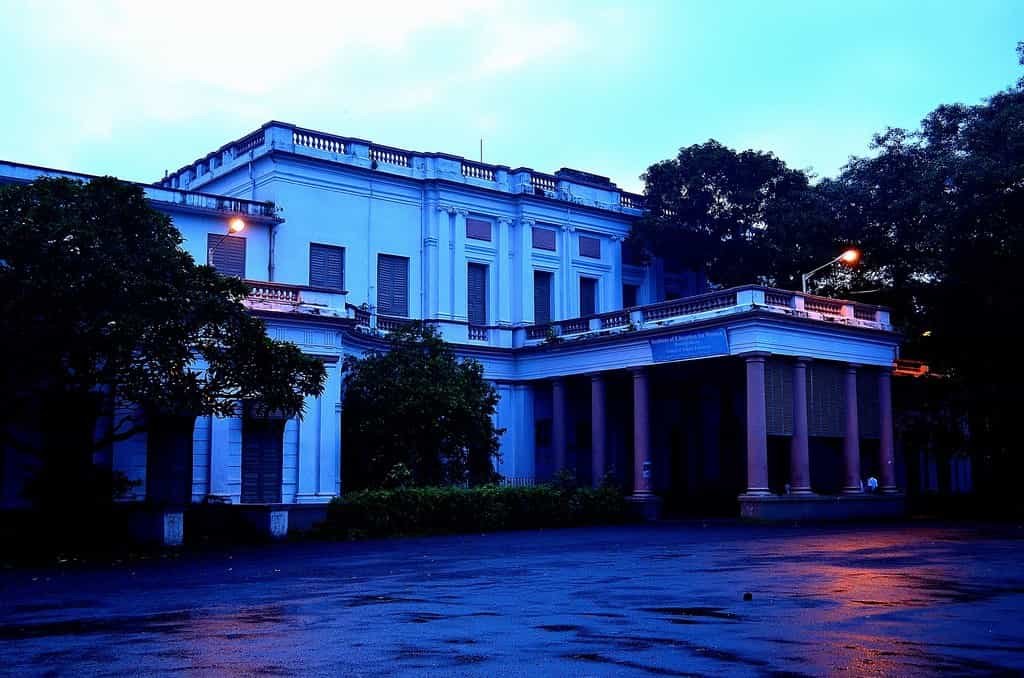 As is clear by the name, Hastings House belonged to the first Governor-General of the Presidency of Fort William (Bengal), Warren Hastings. Upon his return to England, he was impeached for several alleged misconducts, an event which was followed by seven years of trial, finally ending in his acquittal. The footsteps of his ghost are said to be head here; the spirit comes to the house in search of a folder, which supposedly contained papers that would have protected him against impeachment. Hastings House now serves as a college with students claiming to see an apparition on a horse. Another legend associated with the colonial-era building mentions the death of a schoolboy while playing football. In the present times, many students playing the sport here have been said to be seriously hurt. Feel like playing football? I bet you don’t now. 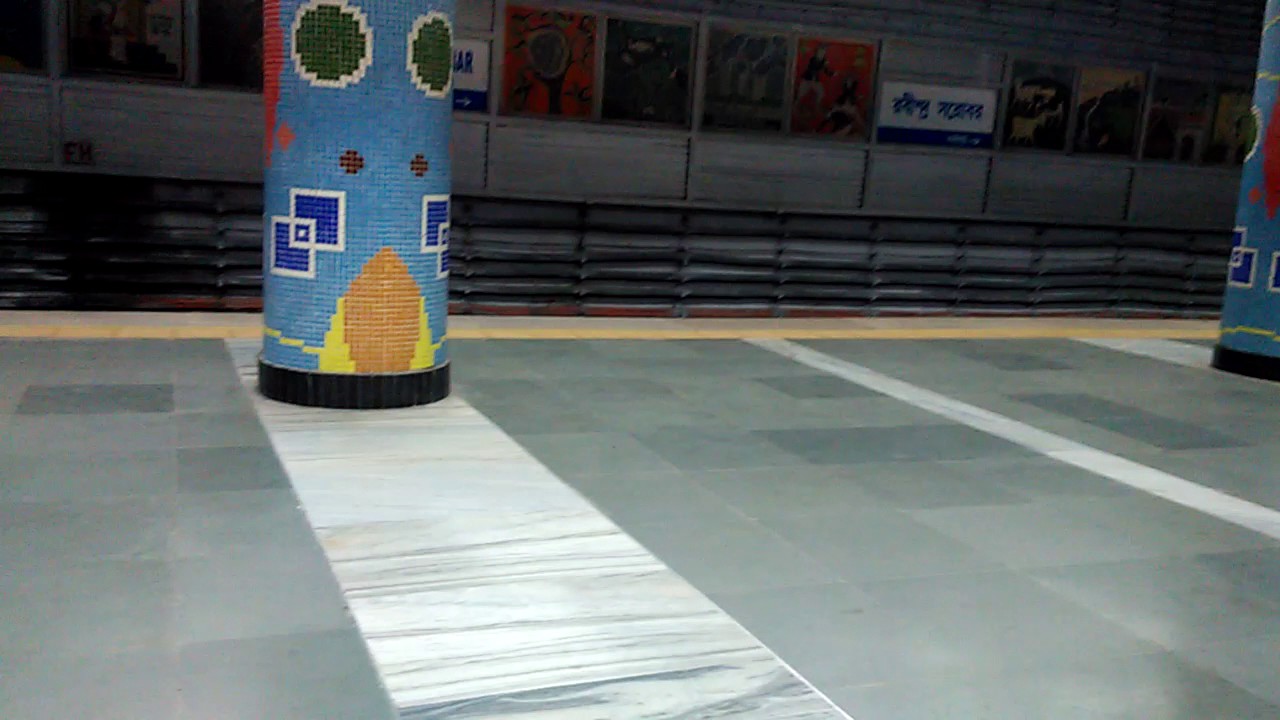 Metro stations, especially the underground ones, are already eerie. Add to the mix reports of spirits and supernatural occurrences, and you probably want to go by car or bus. Rabindra Sadan Metro Station has been the scene of numerous suicides, and the spirits of victims are said to haunt the place. There have been reports of hazy figures passing through platform pillars and railway track; both commuters and train drivers have provided testament to this. Specifically, the last train which runs at midnight is said to be haunted. If you are really into horror movies and are looking for places in Kolkata to have an eerie experience, you have to come here. But, dare to ride the midnight ghost train? 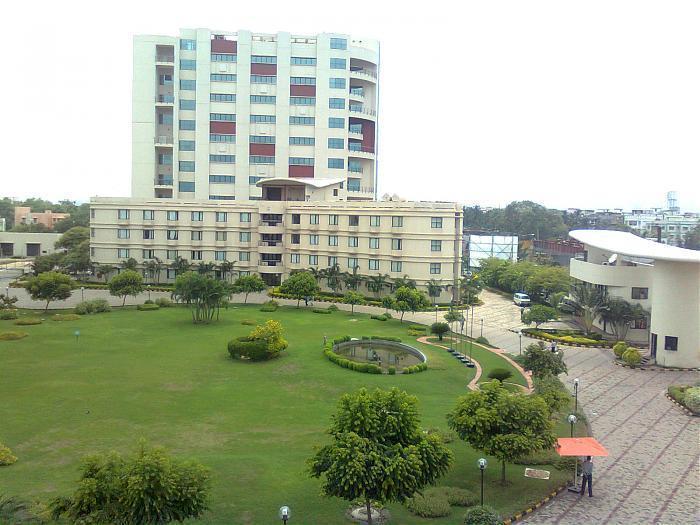 If you are coming to Kolkata for work with an IT company, then there are chances you are staying at a hotel in Salt Lake City. Seems like some ghosts here are really tech-savvy as they have apparently taken a real liking to the Wipro office here. Salt Lake City or Bidhannagar is said to be built on a wetland, and the plot, where the Wipro office stands now, was supposed to be a graveyard. Remember the dollhouse episode of F.R.I.E.N.D.S where Phoebe imagines that it was built on a Native American graveyard and now has ghosts. As with every so-called haunted place, strange figures are said to be seen by people. Employees working the midnight shift are afraid to use the washroom alone or take the lift because they are afraid of the presence, and consider this to be one of the most haunted places in Kolkata. 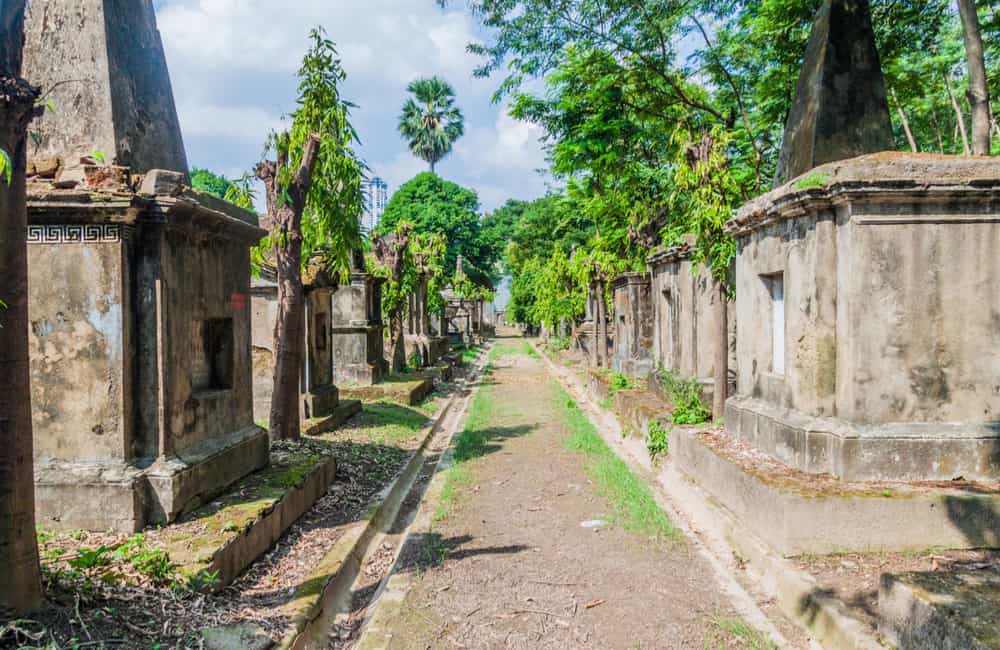 It doesn’t get more Gothic than a cemetery; there are scores of horror movies and music videos showing creepy graveyards engulfed in darkness. The cemetery on Park Street is perhaps the most famous haunted place in Kolkata. People coming here at midnight say they see silhouettes on walls or hear nerve-wrecking sounds. A story associated with the graveyard goes that once a group of friends had come here, and suddenly one of them felt dyspnoea (shortness of breath). Cameras also dysfunction, it is said, and capture strange photographs. If you decide to come here at midnight, just try clicking photos to see if the stories are indeed true.

Also known as Kidderpore Dock, Kolkata Dockyard was built by the Nawab of Awadh, Wajid Ali Shah. His maritime trade with the East India Company ran quite successfully, until he was betrayed by the British. Now, his soul, they say, is back for revenge. Sailors and traders report seeing shadows doing rounds of the dockyard, supposedly of the Nawab, who wants revenge from the British for backstabbing him. 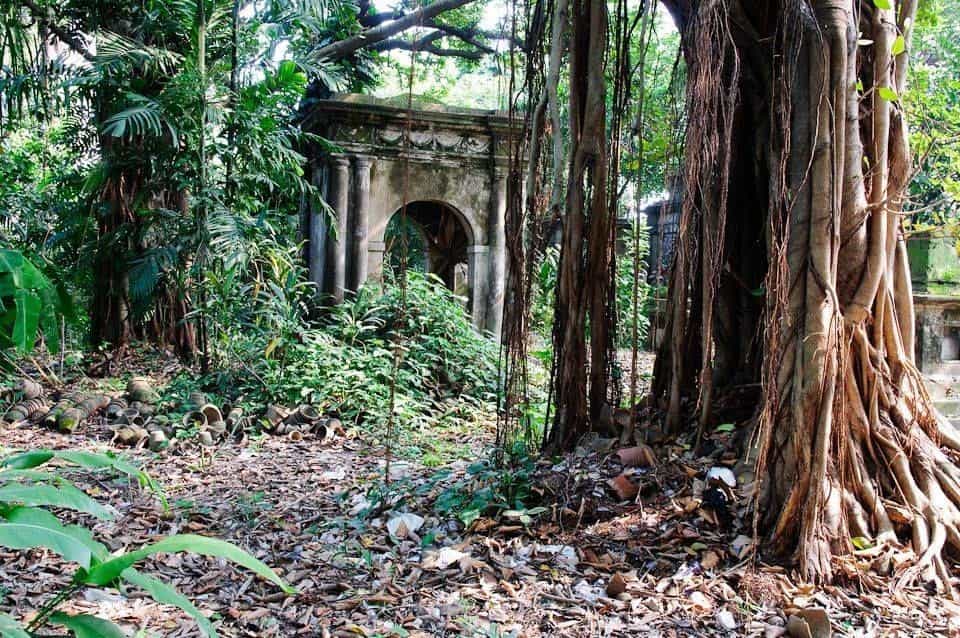 Just down the road from Park Road Cemetery is Lower Circular Road Cemetery, another of the assumed ghostly places in the metropolis. Among the graves it contains is of a British government officer, named William Hay MacNaghten, who was killed and his body mutilated during the Anglo-Afghan War. His remains were brought by his wife, who then buried them here. It is said that if you narrate this story at his grave, the tree above it starts shivering. So, it seems that even nature weeps for this poor soul. Weeping spirits or weeping nature are a constant theme in many Black and Doom Metal bands, so I am looking forward to visit this one even more. Whenever you are staying at hotels in Kolkata or even if you live in the city, muster some courage and visit these places. Even if you don’t feel a presence, it will still be well worth it. Be sure to share your experiences in comments below, if you get out alive! Happy ghost chasing 😉

Apart from Kolkata, there are many other cities with purportedly haunted places. Read about all these spooky spots here: