Why you should be visiting Meenakshi Amman Temple on your trip to Madurai?

Budget Hotels > Travel Blog > Destinations > Madurai > Why you should be visiting Meenakshi Amman Temple on your trip to Madurai?

Temples in India serve a multitude of purposes, the primary among which is being as a place of worship for the believers of whichever religion those are associated with. Secondly, many of these are venues for cultural events where devotees gather in large numbers. Another purpose several temples have come to fulfil is acting as tourist attractions, either for their religious significance or architectural grandeur. This blog is about one such shrine, which serves all three purposes rather well…the magnificent Meenakshi Amman Temple in Madurai.

Read ahead for the myths associated with it, its history, festivals celebrated here, and of course, its mind-boggling architecture. 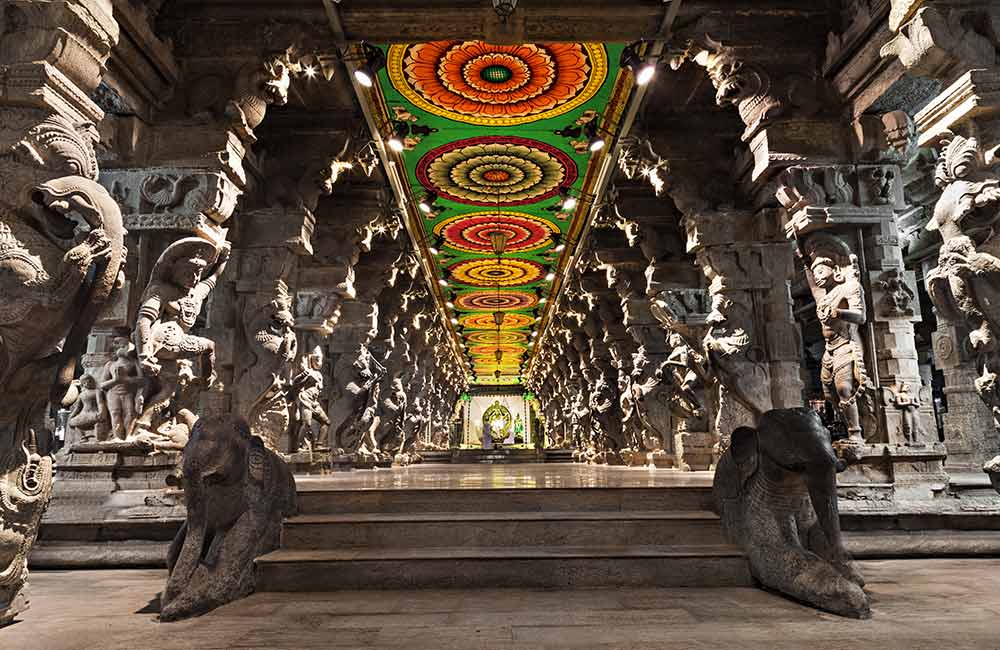 When talking about a Hindu temple, the mythology associated with it is the most significant aspect to dwell on. The legends revolving around it are many, and the most famous one states that a small tower was constructed in ancient times by Lord Indra, the king of the Demigods, to enshrine a self-created (swayambhu) Shiva Linga he had found. Seeing their leader, the other Demigods began worshiping the linga. When the local people witnessed the phenomenon, they informed their king of the same, and he built a proper temple at the site. What’s interesting is that though this legend is about Lord Shiva, the presiding deity of the temple is Meenakshi, an incarnation of Goddess Parvati. Another legend says that the temple was constructed as a memorial to the grand wedding of Meenakshi and Lord Shiva.

In case of Hindu temples, their history is closely tied to mythology; hence, the exact date of their construction is hard to determine. Most scriptures and modern scholars have placed the period of its first construction between 1st and 4th century AD. Sambandar, a Shaiva poet, had mentioned the temple in his 7th-century works, so we know that it was definitely there during that time. It was reportedly destroyed during the invasion of 13th century and then rebuilt by the newly crowned king of Madurai, Vishwanatha Nayakar, in the late 16th and early 17th centuries. Thirumalai Nayakar of the dynasty, who ruled about a century later, further expanded it between 1623 and 1655.

The temple is so grand that it is visible from almost every part of the city. Its basic plan is a vast rectangle, divided into smaller ones by strong masonry walls like in a fortress. As with all Dravidian-style temples, its most noticeable feature is its tall, pyramidal temple towers: those above the entrance gates are called Gopurams, while those above the main sanctum are known as Vimanams. There are 14 gopurams in all, and the one at the southern entrance is almost 170 feet (52 metres) high! All these towers literally overflow with sculptures that depict mini-temples, Hindu deities and scenes from various religious texts. Your eyes will be left wide open at the intricate detailing on these; these are painted in every colour imaginable! These towers are what tourists (not pilgrims) generally come here for.

Yet another of its architectural masterpieces is the world-famous Hall of Thousand Pillars. As the name hints at, the hall contains more than 980 pillars that again feature incredible sculptures, and get this, no two pillars contain similar sculpting! It is even said that some of these pillars produce different musical notes if struck…marvellous, isn’t it? Apart from this one, there are several other halls, called Mandapams, in the temple complex where devotees gather; some serve as entrance porches to the main shrines. These again carry sculptures of deities, humans and those that depict incidences mentioned in mythological texts.

Among the numerous shrines within the complex, two are the most significant: one dedicated to Goddess Meenakshi, and the other to Sundareswarar, a form of Lord Shiva. The shrine of Meenakshi has an idol of her, made of green stone. Potramarai Kulam or the tank is another significant part of the temple as this is where devotees bathe before entering the inner sanctum. Its most recognisable feature is a replica of a lotus, covered in gold, fixed to a pedestal.

As per Tiruvilaiyatarpuranam, a Tamil religious text, King Malayadwaja Pandya and his consort, Kanchanamalai, had no heir, so they performed a ritual (Yagya) to wish for a son, but instead, they had a daughter. A divine voice, which many say was of Lord Shiva, asked them to raise her. She grew up to be a fierce warrior and ruled over the kingdom before getting married to Lord Shiva. This affair is celebrated every year at the temple as Meenakshi Thirukalyanam. During this festival, Goddess Meenakshi is symbolically crowned the queen of Madurai, and then she is married. Further, the idols of the two deities are paraded on beautifully decorated chariots that are pulled by devotees.

Another ceremony is performed by the Vaigai River, and the legend associated with this is also interesting. It is said that on hearing the news of the celestial wedding getting fixed, Lord Alagar, a form of Lord Vishnu, who is the brother of Goddess Meenakshi in regional myths, started for Madurai from the Alagar Hills on foot. As the journey was quite long and consisted of stops on the way, he couldn’t reach the city on time and the marriage ceremony finished. Saddened, he decided to return to Alagar without going to Madurai, but gave gifts to the godly couple on the banks of the Vaigai River.

The Chithirai Festival has yet another part; more closely associated with Lord Vishnu. A sage, named Manduka, was bathing in the river of Alagar Hills when the angry hermit, Durvasa, came by. Manduka didn’t notice his presence, for which Durvasa cursed him that he would be transformed into a frog. On hearing the worried saint’s pleas, Durvasa ordered him to pray to Lord Alagar. As advised, Manduka was successful in appeasing Lord Vishnu with his sincere prayers, and the deity showed the saint his ten incarnations (Dashavatar). Originally two separate festivals occurring in different months, these were combined by Thirumalai Nayakar to unite the people of the Vaishnava and Shaiva sects. Owing to its high significance among both Vaishnavas and Shaivas, the festival, celebrated for a whole month in April, attracts over 1 million devotees from across the country.

So, now you know why Meenakshi Amman Temple in Madurai is so famous across India and also why you should visit at least once in your life, regardless of if you are religious or not. Book hotels in Madurai and explore this amazing religious and architectural wonder today!