Madurai Things to do

12 Top Things to Do in Madurai

The city of Madurai in Tamil Nadu has a long and interesting history including trading ties with the Romans. It is believed to be the site of mythological endeavors of Gods, and has been exalted in ancient texts and the writings of Kautilya as well as Megasthenes – the Greek ambassador at Mauryan courts. Madurai has faced countless invasions by Islamic armies and suffered over the years, but rebuilt itself again and again. Today, when you think of Madurai, the magnificent Meenakshi Amman Temple inevitably pops up in your head. And visiting it is one of the top things to do in the city after checking-in at your hotels in Madurai. But this ancient city, dating back more than 3500 years and one of the oldest in the country, has a lot more to offer.

Here’s a list of everything that you can do in Madurai:

Things to Do in Madurai: 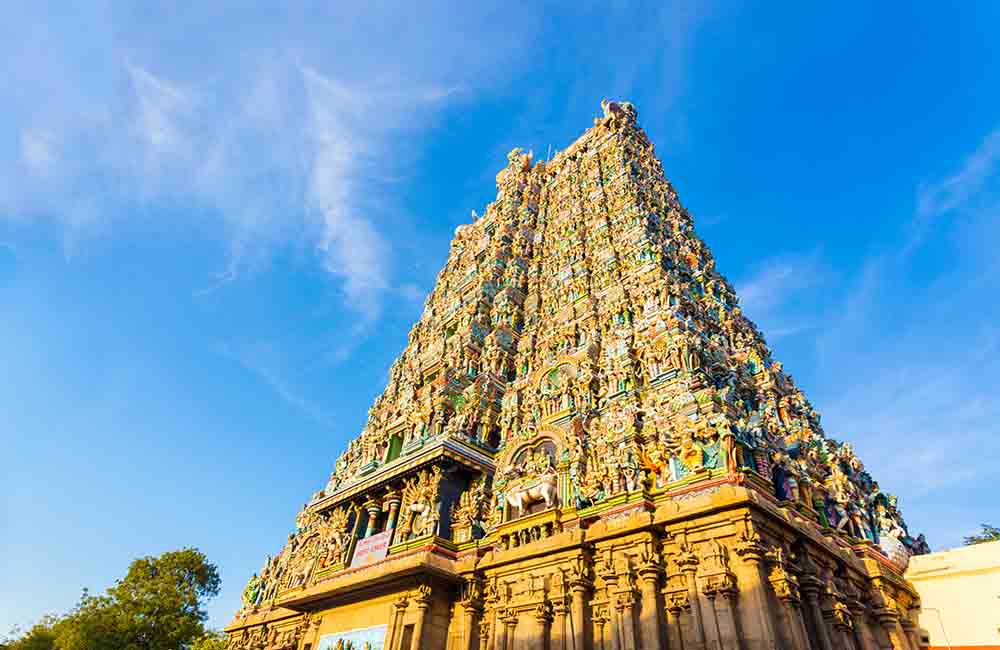 The first thing that catches your attention when exploring Madurai attractions is the incredibly ornate and vibrantly-hued gopuram (gateway) of the Meenakshi Amman Temple. Nearly 15 stories high and adorned with 1500 vividly hued sculptures, the temple is an Indian icon and visiting it is one of the top things to do in Madurai. Built sometime in the 7th century, this temple is an epitome of South Indian architecture and is dedicated to Goddess Meenakshi and her consort, Lord Sundareshwar (forms of Parvati and Shiva).

Visit this majestic shrine to seek the deity’s blessings and be enthralled by its many shrines, 12 magnificent gopurams, the Thousand Pillar Hall decorated with intricate carvings and sculptures as well as the Temple Art Museum located inside it, admire the arched ceiling of the Ashta Shakti Mandapa and take a dip in the sacred Golden Lotus pond. 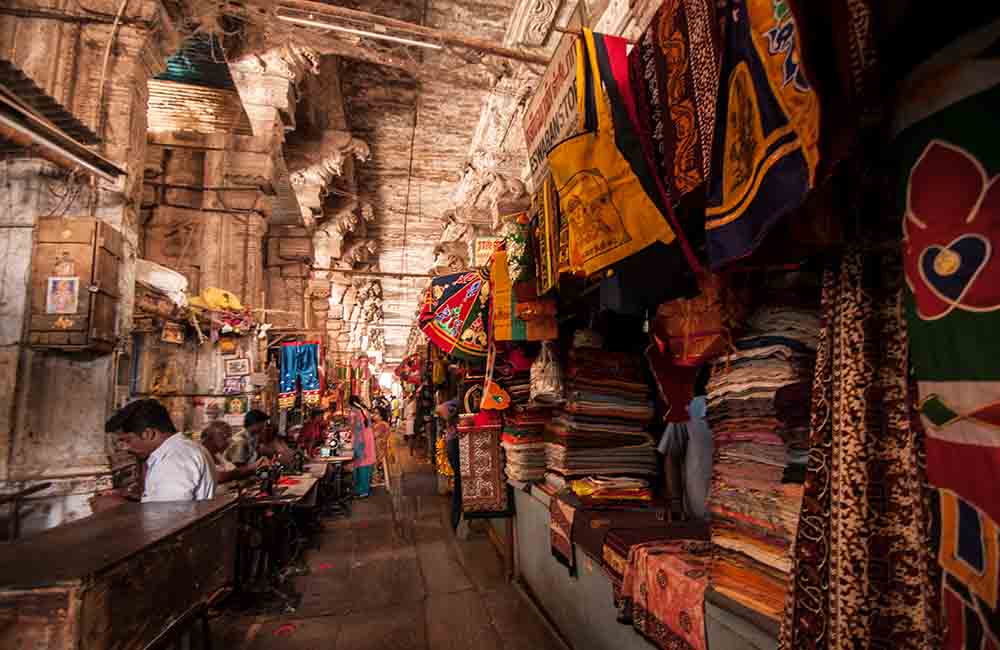 You can’t visit the Meenakshi Amman Temple and not see the Pudhu Mandapam – a beautiful 16th-century pillared hall standing right outside the main temple. The sculptures on the 124 stunning pillars of this hall depict the story of Goddess Meenakshi’s wedding to Lord Sundareshwar, besides other scenes and deities. Today, the structure is occupied mostly by small shops and stalls selling handicrafts and textiles that add to the atmosphere and in fact, constitute one of the most popular markets in the city.

3. Be mesmerized by Thirumalai Nayakkar Palace

Visiting the stunning Thirumalai Nayakkar Palace and being regaled by its architecture is one of the most memorable things to do in Madurai. A 17th-century palace built by the Nayaka king, Thirumalai Nayakkar, this structure will leave you speechless with its 12-feet wide pillars (all 248 of them!), exquisitely painted ceilings that feature fantastical creatures and celestial nymphs, snakes and yalis along with elaborate floral motifs, and its many ornate stuccos and friezes. Built in hybrid Dravidian-Islamic style of architecture, this grand palace also houses a small museum that is definitely a must-visit. 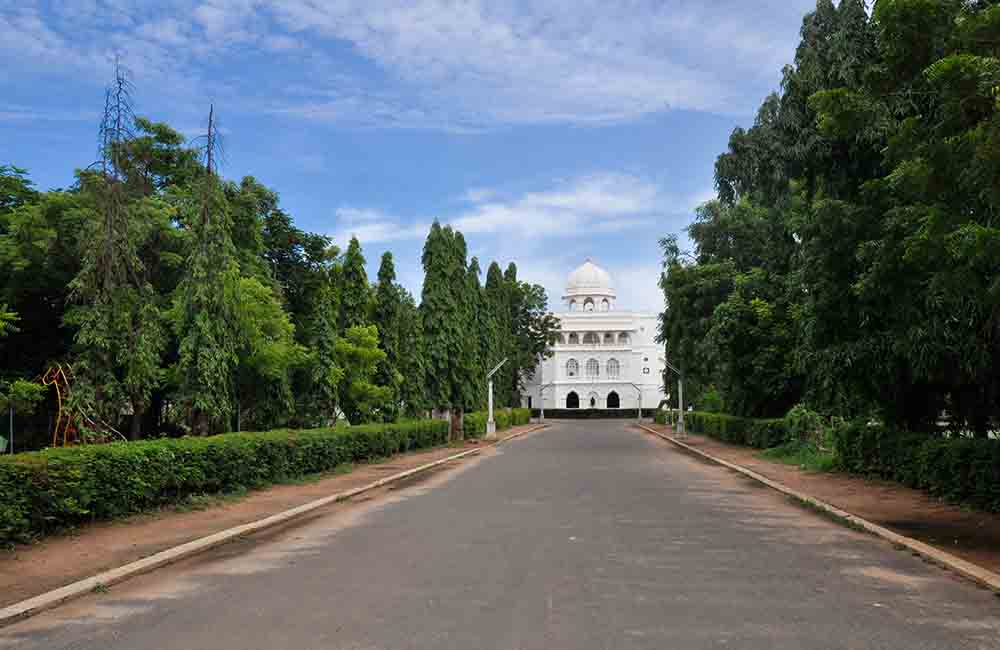 It was here in Madurai that Mahatma Gandhi decided to give up his tailored suits and adopt the humble dhoti as a sartorial expression of pride in everything Indian. The attire he was wearing when assassinated in 1948 is displayed at the Gandhi Memorial Museum in Madurai (with the blood stains and all) along with an expressive account of his life and his struggle for India’s independence. That is why exploring this museum of all the places to visit in Madurai will be one of the most rewarding things to do in the city for you.

5. Take a stroll at the Mariamman Teppakkulam Tank 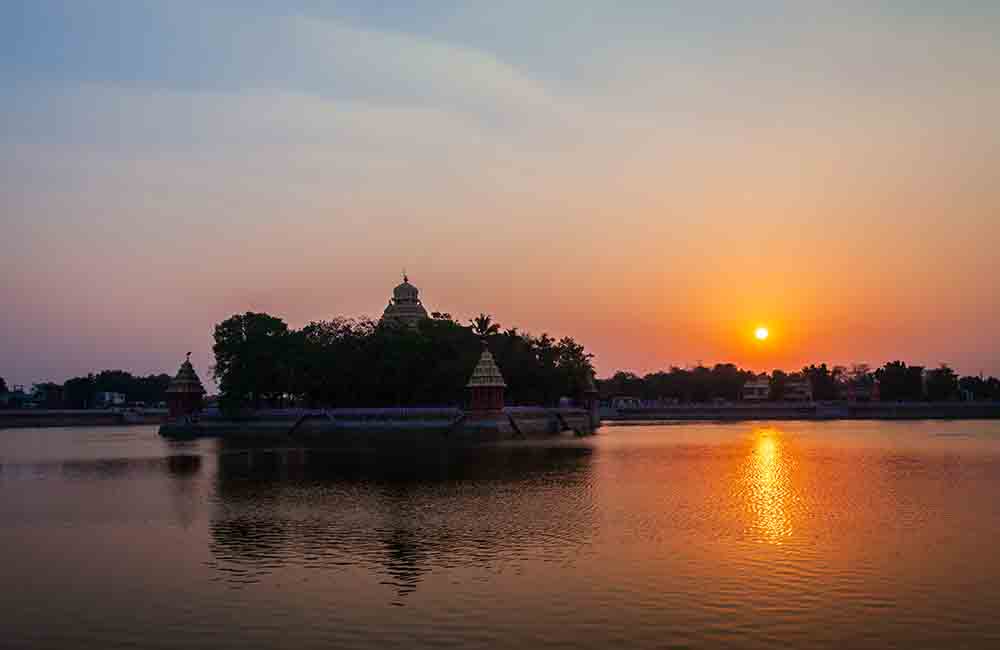 When Thirumalai Nayakkar Palace was being constructed in 1645, builders dug clay from the banks of the Vaigaii River to make bricks for the palatial residence. Soon after, a pond was created at the digging spot and the king decided to make it into a proper tank, fashioned after the Meenakshi temple’s Golden Lotus pond. Surrounded by granite pathways, this tank is a popular evening hangout spot and amongst the top things to do in Madurai for a tourist who wants to unwind amidst peace and quiet.

6. Participate in the exuberant Chithirai Festival 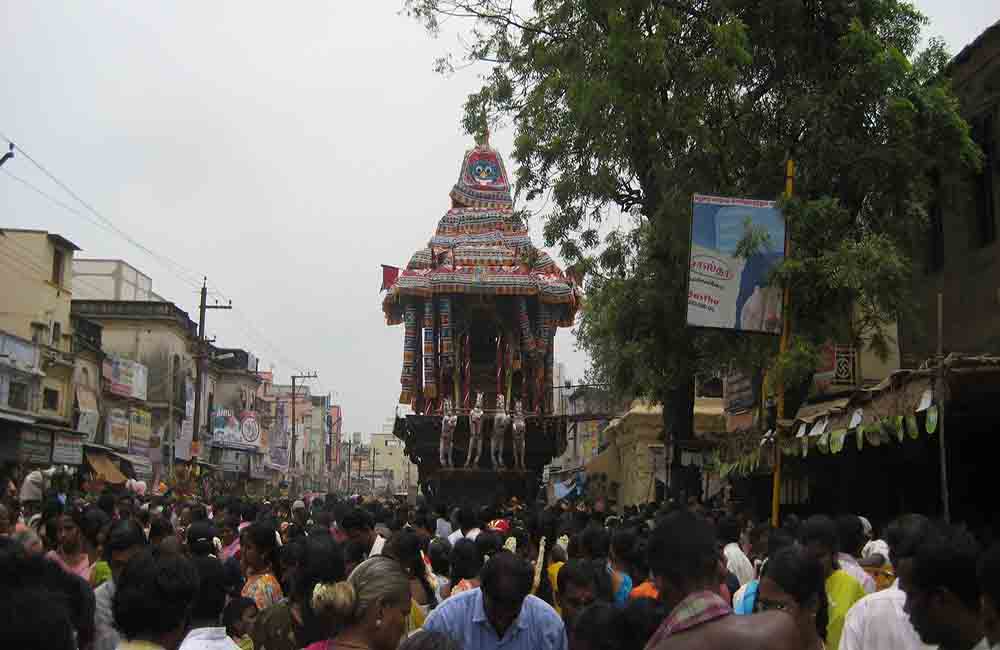 Madurai has a busy festival calendar and something is happening all year round. But the town’s magnum opus is the Chithirai Festival – a re-enactment of Goddess Meenakshi’s wedding to Sundareshwar. A grand affair, this cultural festival is marked by a curious mix of pageantry and spirituality. Be here in April when this 2-week long festival takes place and be regaled by the vibrant processions of deities, intriguing folk dances and the cheerful, government-run Chithirai Mela along with miles of delish street food! 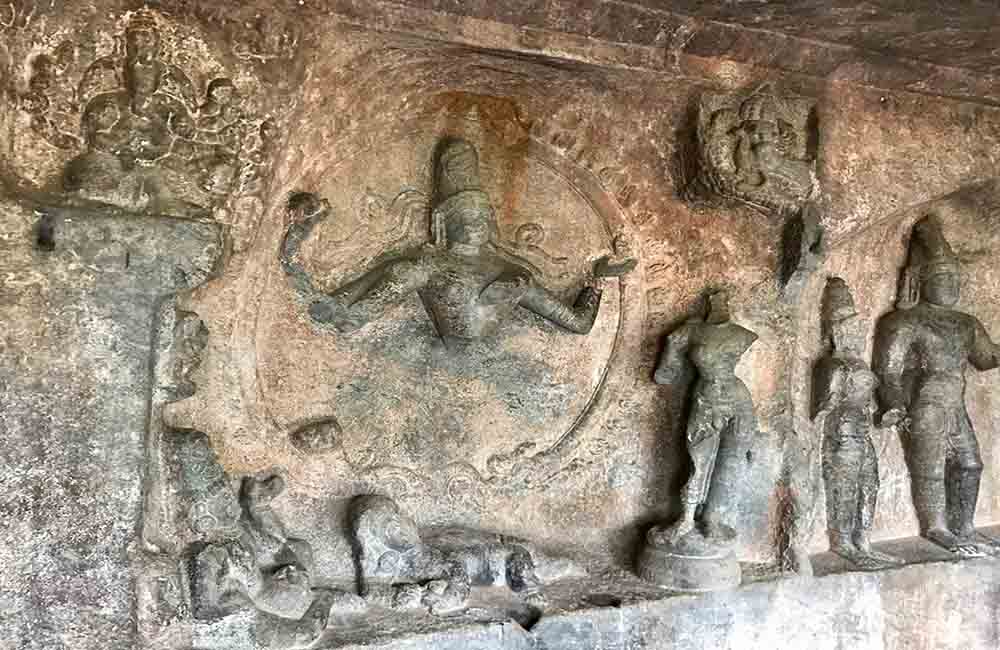 Merely 9 km away from the city center is Thiruparankundram, a suburb that personifies the city’s syncretic culture. One of the best things to do in Madurai is to come here and pay respects at the ancient rock-cut Thiruparankundram Temple, which is one of the six abodes of Lord Murugan. Believed to have been built by the Pandayas with later additions made by the Nayaks, the temple’s architecture is a beautiful example of the Dravidian style. Of special mention here is the main temple that features idols of Shiva and Vishnu facing each other – quite a rarity in ancient Hindu shrines. While here, also visit the grave of Hazrat Sultan Sikandhar Badhusha, a famed sufi saint in the region. 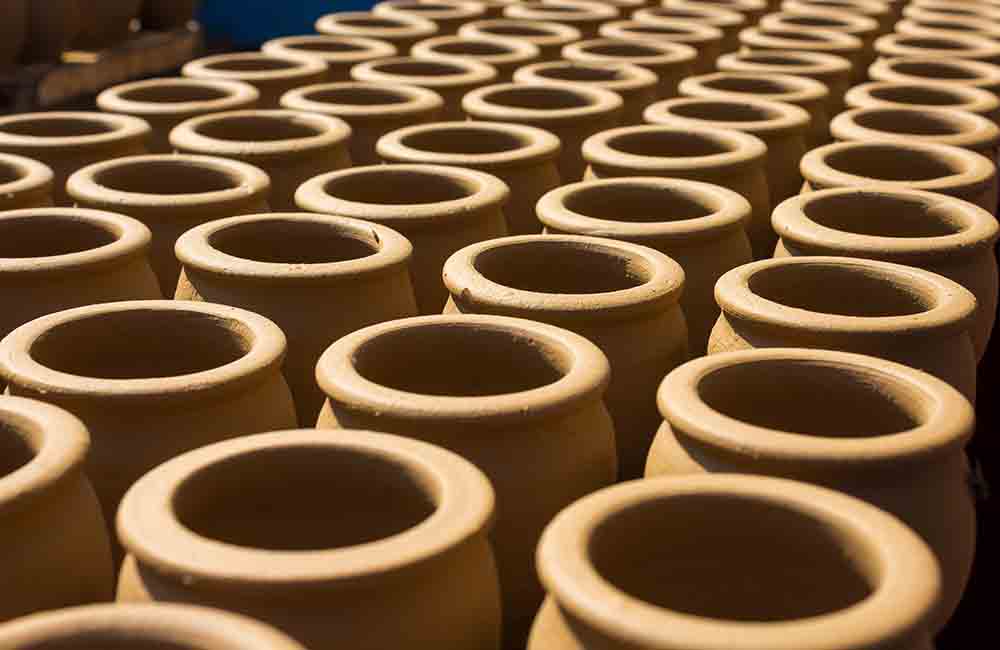 There are many more things to do in Madurai than visiting its temples and the topmost would be spending some time at Vilachery Pottery Village – a small settlement of potters and idol makers about 15 km from Madurai. You will be greeted by one of the most colorful neighborhoods of the city, rife with handcrafted idols of Ganesha, Kolu dolls, small dioramas, depicting daily life in the villages, and even plaster cast idols of the Madonna, the Chinese Laughing Buddha and the Christ. 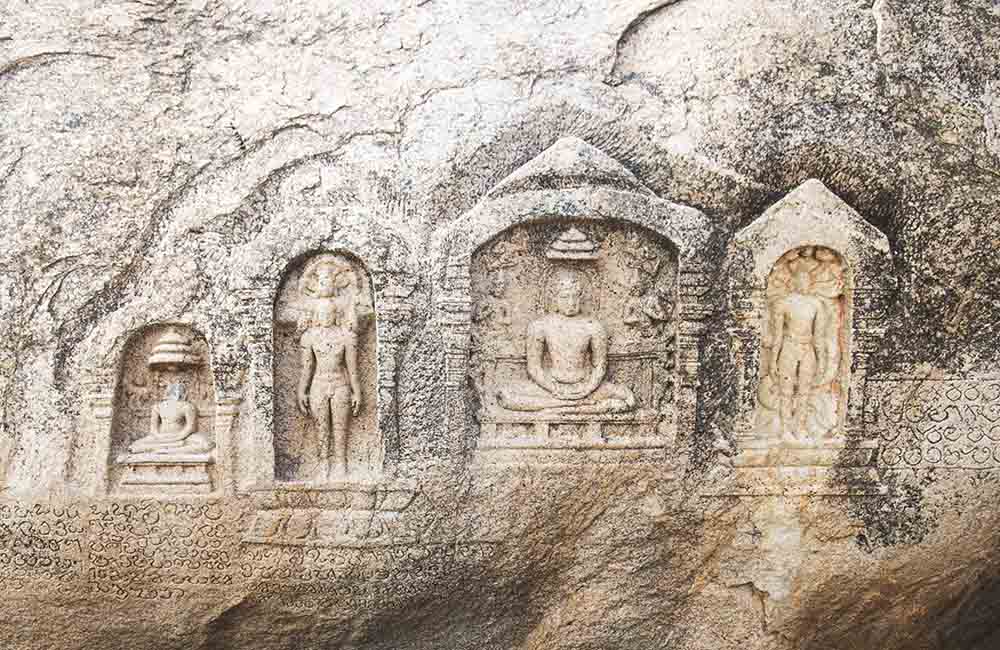 For history and archeology buffs, a visit to Samanar Hills in Keelakuyilkudi Village (just a half hour’s drive from Vilachery) would be most profitable. An ASI protected monument, Samanar Hills are actually a rock –cut cave complex believed to have hosted Jain monks and visiting the monument is one of the more off-the-beaten-track things to do in Madurai. Explore the caves to find beautiful Jain sculptures and prepare to be intrigued by the 2000-year-old inscriptions here written in a Tamil-Brahmi script.

Another one of the top things to do in Madurai is visiting the St. Mary’s Cathedral, one of the oldest Roman Catholic churches constructed in India. Built in the 1840s, the structure is an eclectic mix of European and Neo-Gothic styles and boasts of two impressive bell towers, an arch-ceilinged nave decorated by strikingly beautiful stained glass windows from inside and a beautiful façade. 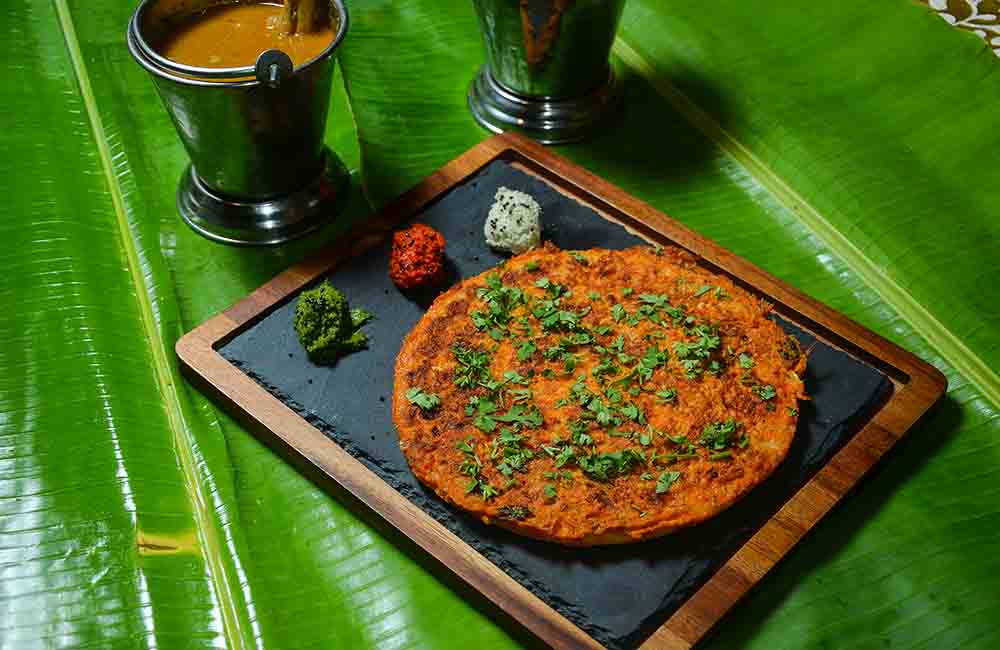 Madurai is as famous for its vibrantly hued temples as it is for its awesome street eats so chasing the food trail is quite ‘the’ thing to do in Madurai. The city’s food culture has been influenced by the communities that used to live here (including the Madurai Saurashtrians who came here as silk weavers), and as a result you get a wide variety of food at the street stalls and restaurants in Madurai. Some of the dishes you must try in Madurai are: Bone Marrow Omelet at Amma Mess, Kari Dosa at the city’s iconic Simmakal Konar Mess, feather-light, fluffy idlis at Murugan Idli Shop, sugar candy flavored at Sri Nagalakshmi Annexe and the super sweet Jigarthanda, Madurai’s most famous dessert available at literally any stall selling it. 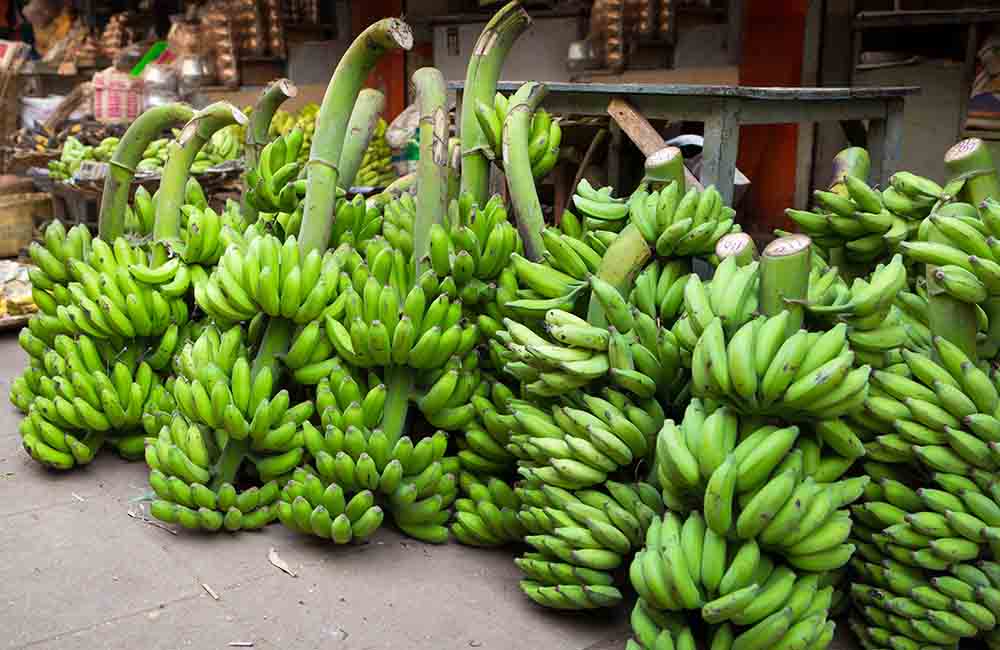 The city is famous for its silks and handicrafts and shopping for these and more is another one of the most popular things to do in Madurai. But before you do that, go visit the city’s famed Banana Market that sells the fruit in wholesale and you can choose from up to 16 varieties! Head to the Prithu Mandapam Market at the eastern gate of the Meenakshi Amman Temple to fill your bags with all kinds of cotton and Sungadi fabric and Batik textiles, something Madurai is famous for. Buy gold at the Madurai’s Bullion Bazaar, the oldest gold market in Asia! A number of large and small shops here sell everything from golden biscuits to trousseau-worthy jewelry. For beautiful Kanjeevaram silks, visit Hajeemoosa – one of the oldest markets in Madurai, established in the late 1900s.

And that, folks are not all the things to do in Madurai! Here are some other options: take a cycle rickshaw tour of the city and explore its streets and by-lanes radiating from the Meenakshi Amman Temple, explore the picturesque Vaigai Dam (about 70 km the city) for a quick getaway, offer clay dolls to deities – a unique ritual followed in Madurai or take in a temple concert, Madurai has been at the center of the evolution of Carnatic Music and holds regular concerts at temples. Know of more things to do in Madurai? Tell us in the comments below.