Mumbai is often called India’s Miami and why not?! It is the city of dreams, the fulcrum of economic and commercial activities, a place with amazing street food, vibrant cultures, evolving fashion trends, incredible savoir-vivre, and needless to say, the home of Bollywood. It is no surprise, therefore, that people seldom associate this city with anything that has remotely to do with history and heritage. Do you also belong to that category?

The city has a fine range of heritage monuments and historical edifices that are culturally magnetic and perfectly augmented with resonating stories, some of which have earned a place in UNESCO’s list of World Heritage Sites. These sites are extolled by millions of tourists every year, especially history buffs and art connoisseurs, who get to see relics of India’s past here. An amalgamation of art, architecture, history, and tradition, each of these edifices will make every Indian immensely proud. Here’s a list of UNESCO World Heritage Sites in Mumbai that add to the experience of visiting this ‘Megapolis of Magnificence’. 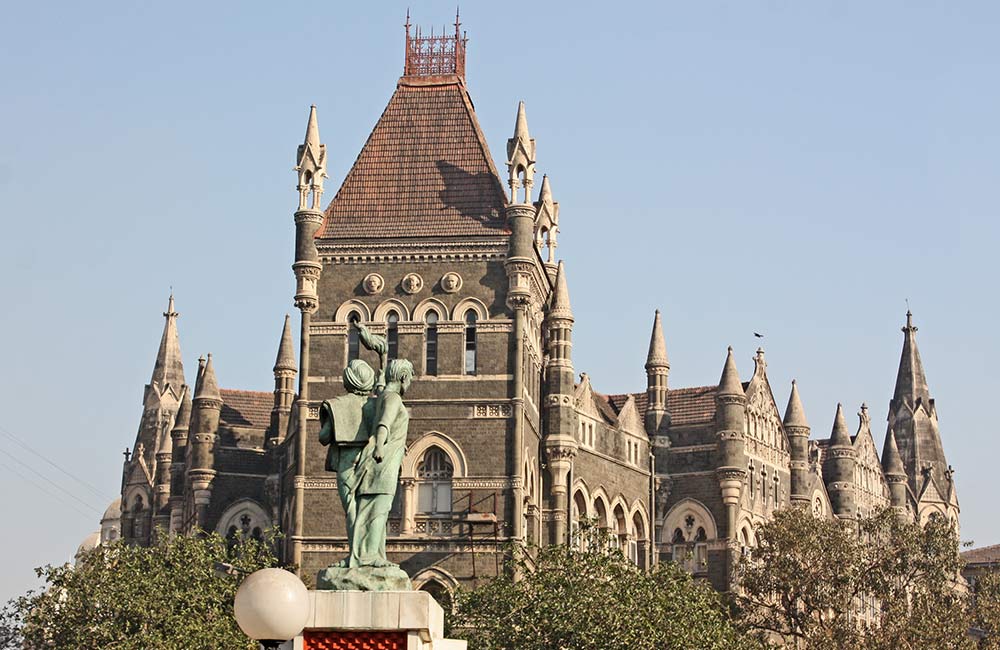 Let us start with the youngest member in the list of heritage buildings in Mumbai – a group of buildings located in Mumbai’s Fort and Marine Drive heritage precincts. Little did Mumbaikars know that their favorite weekend spot will make it to this universally prestigious list, until July, 2018! This rich cluster contains buildings from two different centuries, representing two or more architectural styles and traditions of art. The 19th-century Victorian Gothic buildings are characterized by spires, gargoyles, and lancet windows. These edifices line the city’s Oval Maidan on one side, while the Art Deco structures from the 1930s dot the other. Collectively, these structures are known as the Victorian Gothic and Art Deco Ensemble of Mumbai.

Some of the prominent members of the Victorian cluster include Bombay High Court, University of Mumbai, David Sassoon Library, Elphinstone College, National Gallery of Modern Art (NGMA), Chhatrapati Shivaji Maharaj Vastu Sangrahalaya (CSMVS) and Maharashtra Police Headquarters. These and many other structures in the cluster exude an undeniable charm of the Indo-Saracenic era; these edifices also testify to the cultural and architectural exchanges between India and Europe. The most interesting thing to note here is that these are fully functional buildings that provide public services to Mumbaikars every day. This shows the city’s exemplary urban heritage management even while being catapulted as one of India’s top cultural tourism centers.

The Art Deco cluster that dates from the 1930s includes buildings that flank the western side of Oval Maidan and the first line of buildings along Marine Drive, such as Ram Mahal and the iconic Eros and Regal Cinemas. It looks as if two different worlds merged into one, with urbanization and preservation joining forces to form a formidable unit. Mumbai’s bountiful structural allure just got more fascinating with the fact that these Victorian buildings are regarded as the most well-integrated cluster in the world, while the Art Deco cluster is the second largest assemblage across the globe. Even if you are not a history buff, one look at these structures will get you curious about their history and heritage.

Trivia: The Art Deco Movement gained prominence in Mumbai after the First World War. The city is second to Miami with over 200 Art Deco structures. 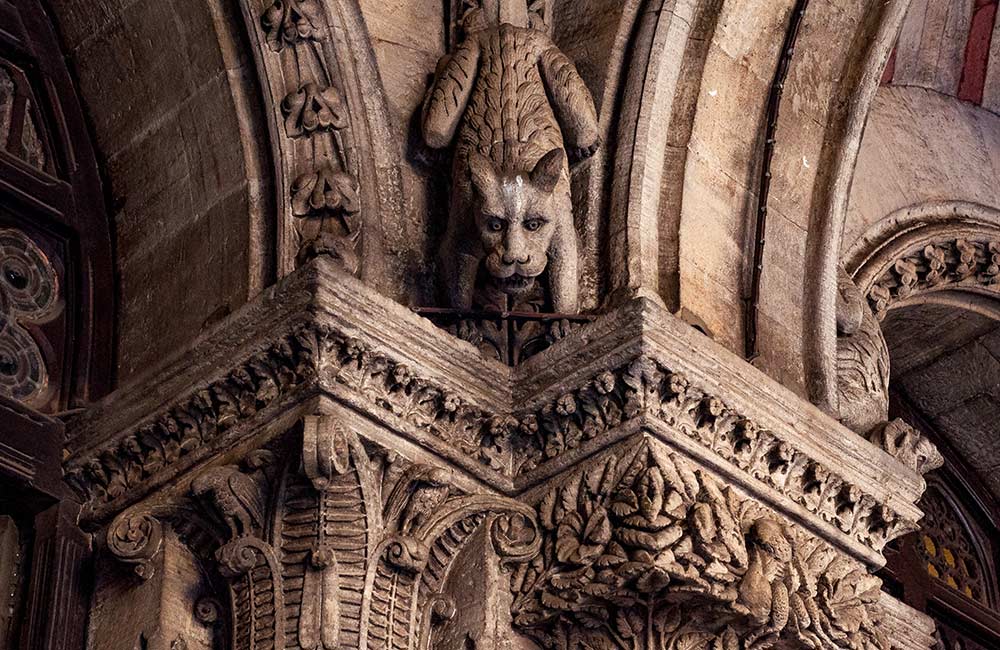 When we say heritage sites in Mumbai, you naturally expect to find palaces, forts, monuments, and historic places on the list. A railway station is perhaps the last thing you would expect to find on such a list. But, Chhatrapati Shivaji Maharaj Terminus (CSMT), one of the busiest railway stations in the country, has made it as a UNESCO World Heritage Sites and for all the right reasons. Formerly known as Victoria Terminus Station, this Neo-Gothic building designed by the British architect F. W. Stevens was opened to the public in May 1888. Yes, this magnificent structure, which gave Mumbai the name ‘Gothic City’, enjoys a history of over 130 years. Ever since its establishment, CSMT has been standing witness to the changing faces of the city and its dwellers.

You might have noticed this World Heritage Site in Mumbai in many Bollywood movies as the backdrop. Built over a period of ten years starting from 1878, CSMT is an example of the High Victorian Gothic style, showing a fusion of Indian architectural influences as well. Some of the defining features of the building are its stone domes, turrets, pointed arches, gargoyles, allegorical grotesques, ornamental brass and iron railings, and wooden carvings. The East meets the West in this flawlessly executed structure that has a global appeal as well as high commercial value. Used by more than 3 million commuters every day, CSMT is a fully functional railway station maintained by the Indian Railways. The station holds four local railway tracks, eleven out-station tracks, and seven suburban tracks. The interiors of CSMT consist of 3D-stone carvings of animals, arched tympana, meshwork on decorated windows, human depictions, and other Gothic detailing. You must definitely take a local train here to experience how a Mumbaikar’s daily adventure feels like!Read also – Things to do in Mumbai

Trivia: Apparently, CSMT is the second most photographed building in India; the first, of course, is Taj Mahal. You must have seen the station and its premises not just in photographs but also in movies. If you don’t know it yet, the song ‘Jai Ho’ from the Academy Award-winning movie Slumdog Millionaire was filmed here. 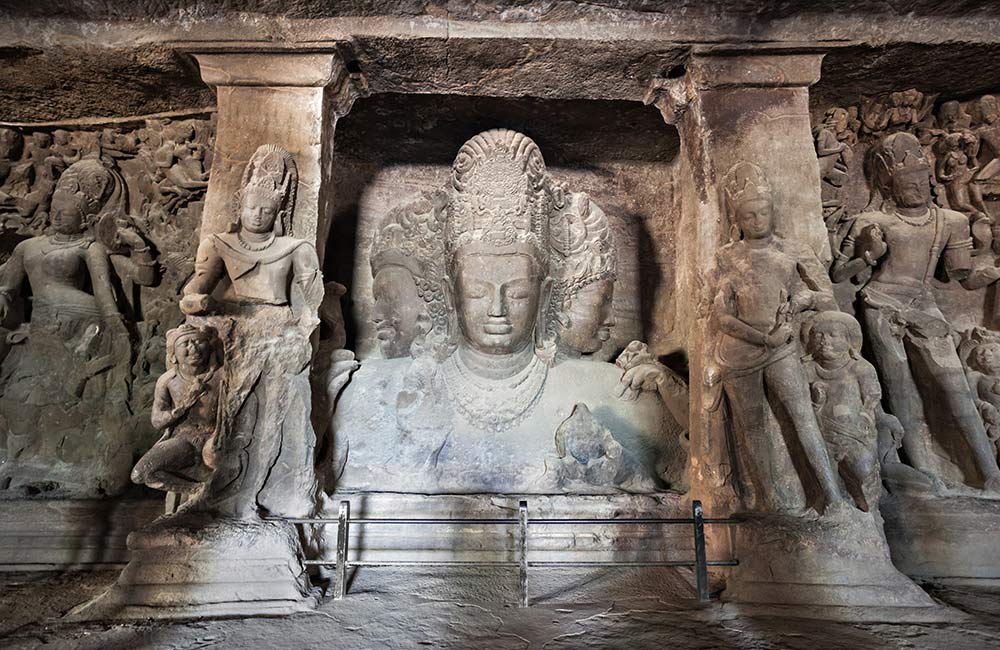 Inscribed as a World Heritage Site by UNESCO in the year 1987, Elephanta Caves are located on the island of Gharapuri (also known as Elephanta Island) in the Arabian Sea. Dedicating its artistic splendor to the cult of Lord Shiva, this site contains a cluster of temples and reliefs that possibly trace their origins back to the 5th and 6th centuries. Presenting one of the finest examples of rock-cut architecture, the site consists of a total of seven caves, some of which show influences of Hinduism while others are Buddhist caves.

Every inch of the caves is intricately hand carved to perfection. Their layouts, themes, dimensions, forms, representations, alignment, content, and execution will render you speechless. The main cave in the cluster, which is also known as Cave 1 or the Great Cave, was a shrine where Hindus actively worshiped till the arrival of the Portuguese. The seven-meter-tall Sadashiva sculpture instils a dominating sense of allure on onlookers. The three aspects of Lord Shiva – the Creator, the Preserver, and the Destroyer – can be identified in this sculpture. Other important sculptures at the site include Gangadhara, Ardhanarishvara, Nataraja, and Yogishvara, all of which are different forms of Lord Siva.

Many stupas are buried under the caves that are yet to be excavated. Two canons located atop the hillock are evidence of the Portuguese dominion over the area. The monolithic temples, sanctums, stupas, courtyards, and rock-cut structures create an artistic deluge in the minds of visitors through their archaeological panoply. The best way to reach the site is to take a one-hour ferry ride from the Gateway of India.

Trivia: Any guesses where the site gets its name from? When the Portuguese arrived here, they saw a giant elephant statue and called it elefante, which later became Elephanta. When you walk through the site, you will see that many of the sculptures are defaced. In the 17th Century, Portuguese army used these sculptures for target practice, which caused heavy damage to many of these.

Being inscribed as a UNESCO World Heritage Site is a global privilege that only certain places or things enjoy. These three paragons of architectural and traditional élan make Mumbai reign supreme among other commercial and cultural sites in India. So, what are you waiting for? Plan your trip, book a room at hotels in Mumbai that are close to the attractions, and start exploring…