Teen Darwaza is a striking gateway located on the eastern side of the Bhadra Fort in the city of Ahmedabad.  A historical monument in its own right, this 600-year-old gateway has been witness to many important events that occurred in the fort in the bygone era. As the name suggests, the structure features three arches complete with remarkably ornate buttresses. From being a grand entrance to the erstwhile royal fort to a historical attraction surrounded by a bustling market, Teen Darwaza has come a long way over the last few centuries but its charm remains undiluted.  That’s precisely why it counts among the top tourist places to visit in Ahmedabad.

So, what makes this historical archway a must-visit attraction for history buffs and tourists alike? Given below is a comprehensive account of the famous Bhadra Fort Teen Darwaza in Ahmedabad including its history, architecture, timings, entry fee, lesser-known facts, and nearby attractions.

It was Ahmad Shah I of the Muzaffarid Dynasty who built Teen Darwaza along with Bhadra Fort in the 15th century. He began the construction of these structures right after making Ahmedabad the capital city of the Gujarat Sultanate. The architecturally-intricate gateway took four years to complete, spanning from 1411 to 1415.

Teen Darwaza served several purposes apart from being one of the entrances to the fort. Foreign embassies or feudatories used to gather beyond this archway when they came to meet the ruler. Troops also used to assemble here for martial initiatives. Sometimes, the court was also held in the royal square during the evening hours.

The elaborate Teen Darwaza is built in the Indo-Islamic style of architecture and features an inscription by Chimnaji Raghunath – a former Maratha governor. It has three arches with a height of 25 feet; the one in the middle has a width of 17 feet while the other two are 13 feet wide.

The archway has a terrace on the top, which previously featured a roof but it was thrown open following a repair in 1877. The arches of the gateway have piers between them, each featuring highly decorated buttresses.

Teen Darwaza opens to a large open square with a raised terrace and fountain in the center, beyond which the fort and its adjoining structures are located. This open stretch between the gateway and the fort was previously known as Maidan Shah or the royal square.

Today, Teen Darwaza has the reputation of being one of the top historical attractions in Ahmedabad due to its architectural splendor and rich history. As part of the Bhadra Plaza Development Project undertaken by the Ahmedabad Municipal Corporation (AMC) and the Archaeological Survey of India (ASI), the fort and its surrounding structures were given a makeover. The royal square was also restored in 2014 and was declared a pedestrian zone complete with public amenities.

Over the years, the streets surrounding the gateway have been transformed into one of the best shopping places in Ahmedabad. The bustling market area has stalls selling all kinds of stuff, including household goods, handicrafts, embroidered items, Meenakari furniture, ethnic wear, shoes, and a lot more. The best part is that you can bargain with sellers to seal good deals. During the International Kite Festival, Teen Darwaza Market becomes a hub for kites – available in various colors, shapes, and sizes. The road beyond the archway will take you to another local bazaar and night food market in the city, namely Manek Chowk.

Attractions at Teen Darwaza and the Bhadra Fort Area, Ahmedabad

Teen Darwaza and the adjoining Bhadra Fort Complex have several attractions that make for an interesting visit. These include:

Read Also – Things to do in Ahmedabad

Teen Darwaza is not just an ordinary archway built in stone; it’s a gateway into a glorious era in the history of the region. How about planning a visit to this historical landmark and soaking in its architectural grandeur?

Use Coupon Code "FABSTAR", Get 30% Discount! 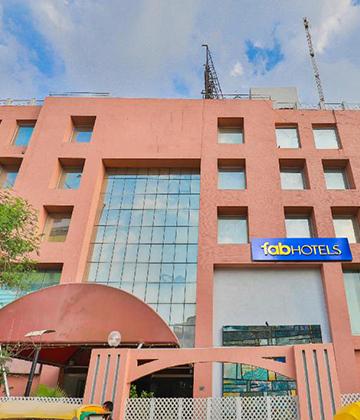