10 Must Visit Weekend Getaways from Ahmedabad

Ahmedabad is one of the most important cities in Gujarat. A rich historical past has gradually given rise to a growing commercial, tourist destination and with its charming temples, architectural marvels and informative museums, there is a lot to explore within the city. But what makes it better is the prime location of Ahmedabad – which is between Rajasthan and Gujarat. Giving you access to some of the best tourist spots in the world, Ahmedabad is a traveller’s paradise. 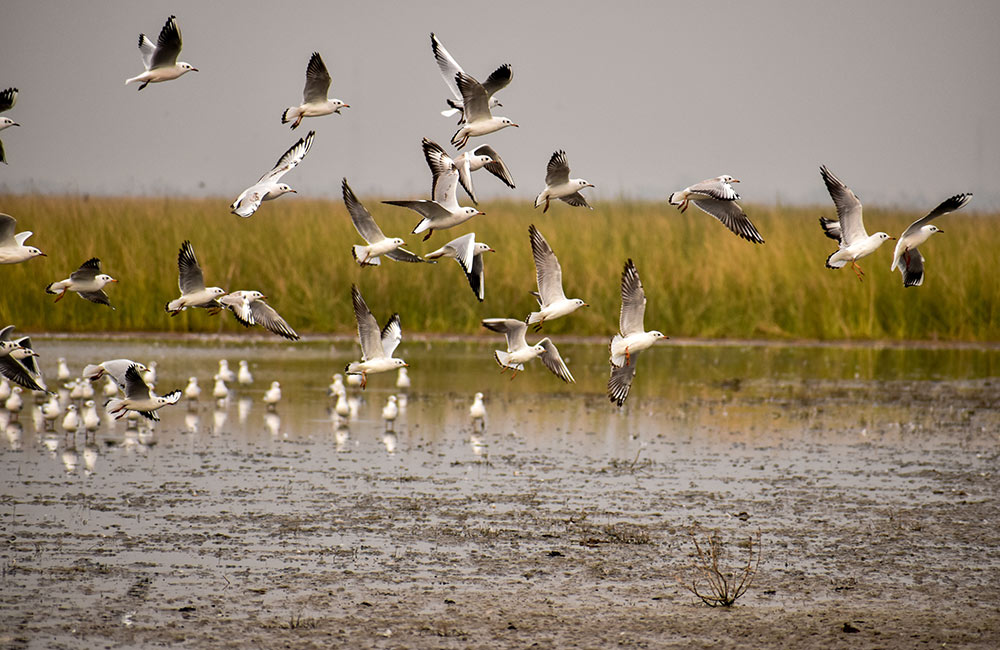 Considered to be the largest wetland bird sanctuary in Gujarat and one of the largest in the country, Nal Sarovar’s close proximity to Ahmedabad makes it a great weekend destination. With over 250 species of birds, it is home to rare migratory birds during winter; which travel from as far as Siberia. With surreal views of nature and a close tryst with the bird population, the sanctuary more than makes up for a relaxed weekend. Among the species of birds, you must watch out for lesser and greater flamingos, brahminy ducks, herons and purple moorhens.

Gradually the sanctuary has become a favourite among travellers giving rise to tourism and the local economy. Choose a hotel close to the sanctuary for more time amidst nature.

Modhera | #2 of 10 Weekend Getaways from Ahmedabad

Popular across the country for the majestic Sun Temple, Modhera is a wonderful weekend getaway situated along the River Pushpavati. The temple is an example of architectural brilliance and is a favourite with photographers and history buffs. Constructed entirely in stone, the temple has ruins of the five elements and is an intriguing insight into the older belief system. A great time to visit Modhera is during the Modhera Dance Festival which brings tourists from all over the world. The quaint city is also known for its step-wells which are quite delightful to discover. 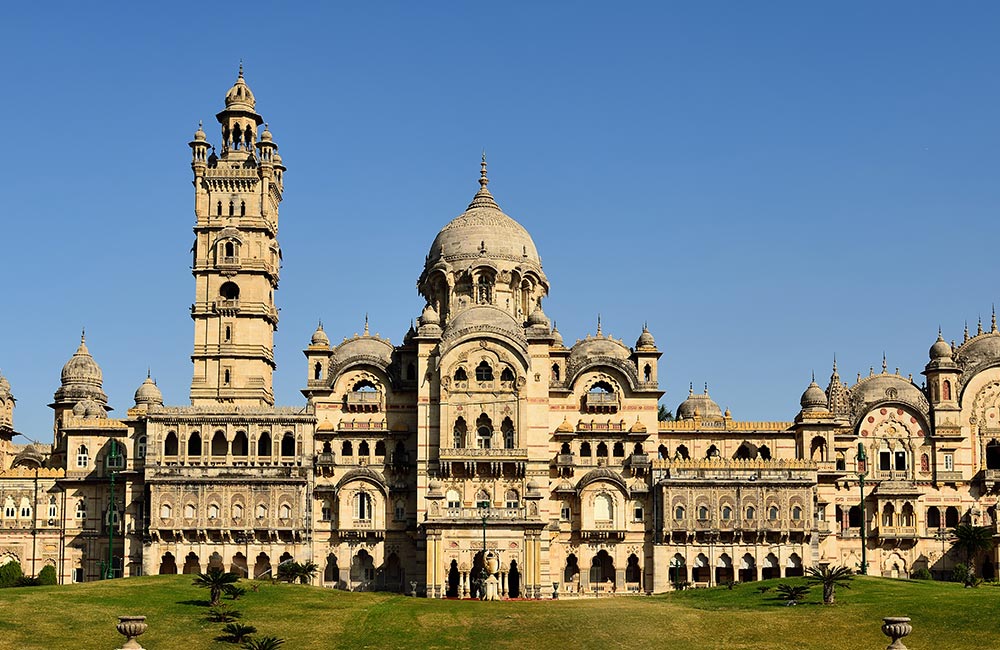 Vadodara | #3 of 10 Weekend Getaways from Ahmedabad

The cultural capital of Gujarat, Vadodara was once an important commercial hub. Located by the Vishwamitri River, the city is home to a number of Jain shrines, Hindu temples and pre-Mughal monuments. What the city stands out for is the nine-day Navratri celebrations – which are unlike any other in India. With cultural performances throughout the city and a celebratory air, it’s the best time to visit Vadodara. 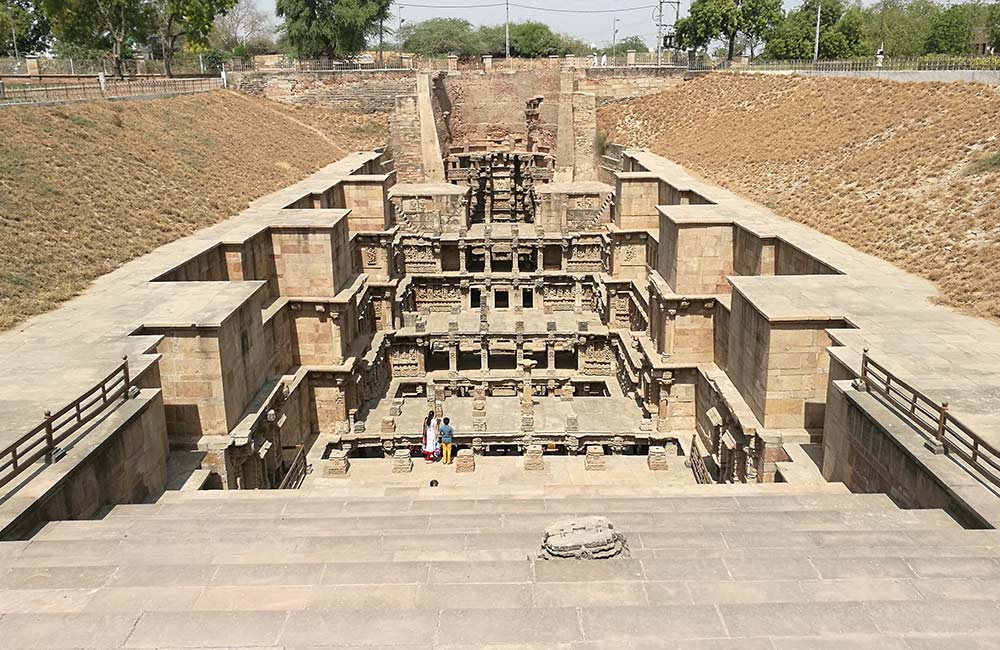 Patan | #4 of 10 Weekend Getaways from Ahmedabad

The state capital of Gujarat for almost 650 years, a gateway to the bygone era and a city of old-world charm and legends – Patan will leave you dazzled. The increasing interest in the city can also be credited to Rani ka Vav which is part of the UNESCO World Heritage Site and is one of the primary attractions here.

Also known as Anahilvada Patan, this city is home to the sacred, ancient Kali temple which is almost 1000 years old. The temple is dedicated to Kali Ma who is the Kuldevi or the family goddess of the Solanki dynasty. An important trading and learning centre, today Patan is home to stunning patola and mashru weavers. 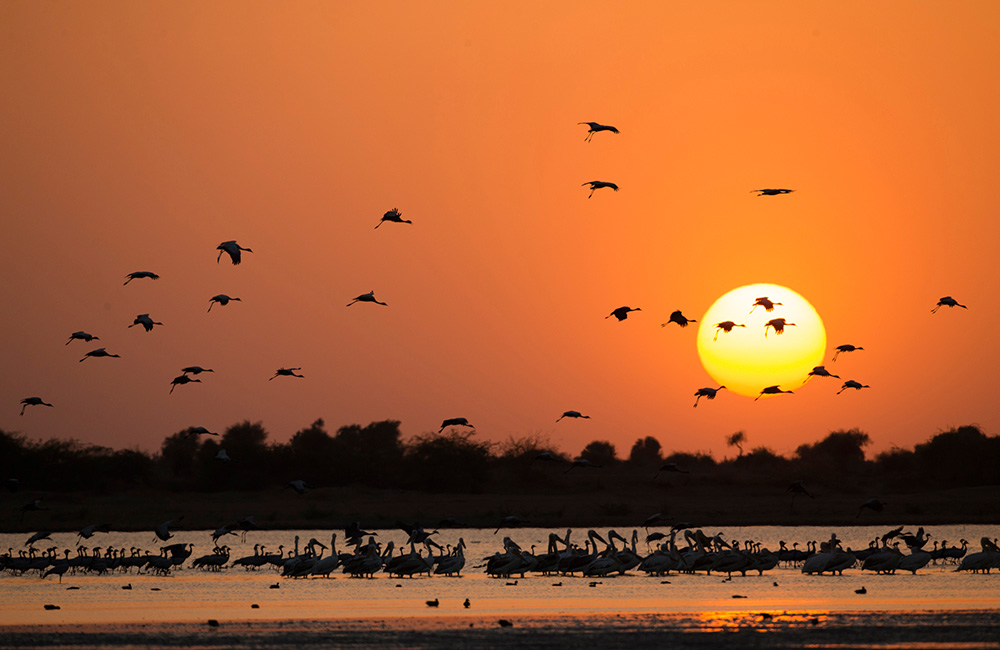 Little Rann of Kutch | #5 of 10 Weekend Getaways from Ahmedabad

Gujarat is a nature lover’s haven and among the many stunning places to visit is the Little Rann of Kutch. Home to the unique endangered Indian Wild Ass or as it is locally known – the Ghudkhar; it is visited by wildlife enthusiasts from across the world.

With over 3000 living in the Kutch Indian Wild Ass sanctuary, it’s a sight to behold. Agile and usually an animal which is spotted in herds, they can easily run long distances. You can also spot other rare species of mammals here including desert fox, jackals, blackbucks and striped hyenas. If wildlife and natural beauty is what you seek in a holiday, this is definitely the place for you.

Vijaynagar | #6 of 10 Weekend Getaways from Ahmedabad

Temples, nature and rich heritage have gradually made Vijaynagar one of Gujarat’s most visited cities. Also known as the ‘Ancient Polo City’, it is an offbeat weekend getaway with much in store for history buffs, photographers and wildlife lovers. The city’s position is such that it acts as a gateway between Gujarat and Rajasthan.

You must visit the Vijaynagar forests which were part of an erstwhile ancient city and are also home to archaeological wonders including the remains of Jain and Shiva temples which are as old as the 15th century.

Long, windy roads and gently unfolding Aravallis are among the first few things you notice about this bustling hill station. Rajasthan’s only retreat from the desert sun and Ahmedabad’s favourite getaway spot – Mount Abu is a saviour. Of course, stunning natural beauty is not the only thing that brings tourists here; credit also goes to the historic Dilwara Temples. A mesmerising architectural beauty, the Dilwara Temples are over 1000 years old and are dedicated to Jainism. Since the temples look quite modest from the exteriors, pilgrims are taken aback with its sheer beauty. 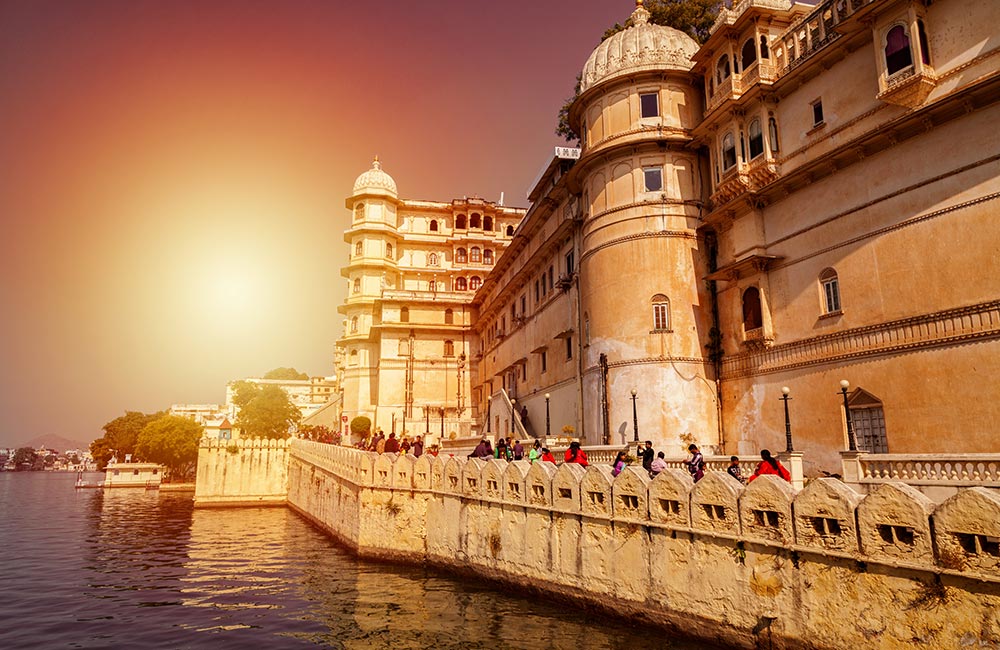 Udaipur | #8 of 10 Weekend Getaways from Ahmedabad

The archaic capital of Mewar, fondly known as the ‘City of Lakes’ – Udaipur has always been a popular tourist destination. There is a world of architectural wonders to discover in this old city including the stunning City Palace overlooking Lake Pichola.

For your lake tour, you must go boating on Fateh Sagar Lake and Jaisamand Lake which is surrounded by breath-taking natural beauty, along with a tour of Lake Pichola which is where the old city is. Another great part of Udaipur’s culture is its bustling markets which sell everything from traditional Rajasthani art, coloured glass lamps to vibrant furniture. 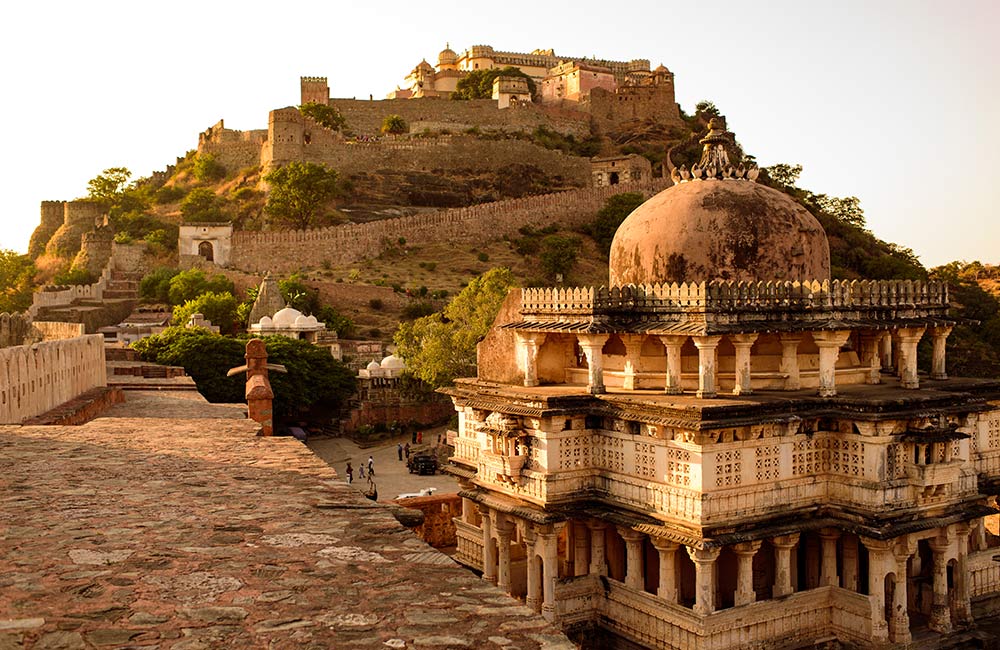 Kumbhalgarh | #9 of 10 Weekend Getaways from Ahmedabad

A land of legends, grand architecture and history – Kumbhalgarh is a quintessential Rajasthani town. Popular across the world for the second longest continuous wall and its rugged terrains, the city is unlike any other. Enveloped in old-world charm, you are transported to another era which is reminiscent of a history lesson. With its temples, chattris and rare fauna and flora, there is just so much to explore in this small city. 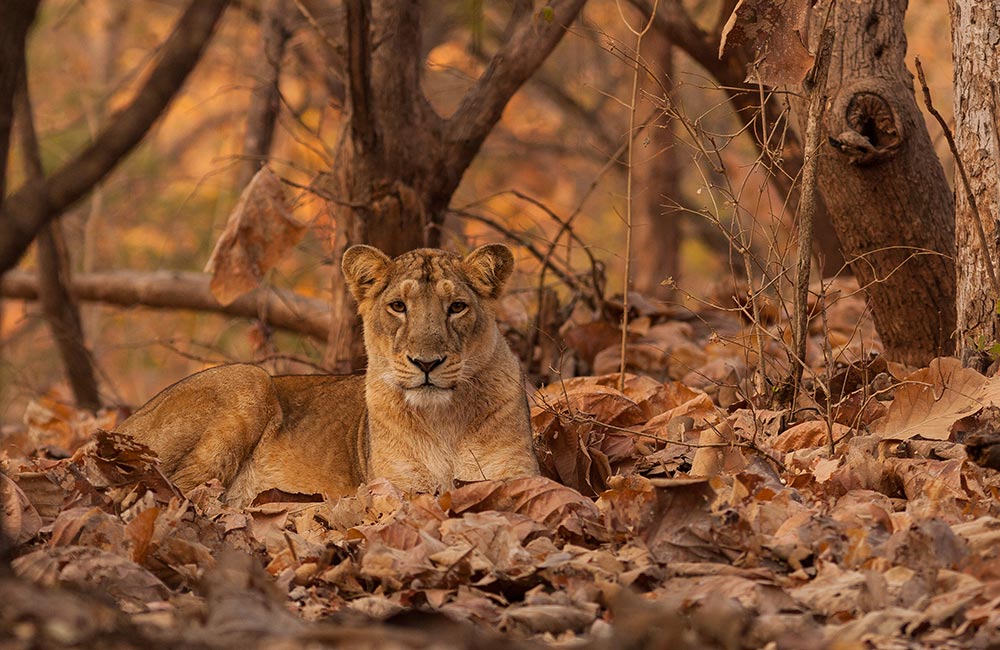 Gir Forest National Park is on the bucket list of every wildlife enthusiast and rightly so. Home to the majestic Asiatic Lion, the sanctuary has gradually been successful in preserving this species. A part of the land is a national park while the rest is a wildlife sanctuary giving you an opportunity to closely see these regal lions in their habitat.

Rugged slopes, tough terrains and deep valleys make Gir a tad bit difficult to discover but a glimpse of the Asiatic Lion is worth it! The sanctuary also has a spectacular population of birds and if you are a bird watcher – you are in for a big treat. A considerable amount of effort has gone in to maintain the sanctuary and it’s important to remember all the rules with respect to wildlife conservation when you visit.

Kirat Sodhi
I write to express, to vent, to believe, to change. A traveller and dreamer - my words take me everywhere.