Bibi Ka Maqbara in Aurangabad is a magnificent mausoleum that exhibits exceptional architectural beauty. Constructed by the Mughal ruler Aurangzeb as a memorial to his first wife Rabia-Ul-Daurani aka Dilras Banu Begum, this 17th-century structure bears an unmistakable likeness to the Taj Mahal, which is the final resting place of his mother. Standing against the scenic backdrop of the Sihaychal Ranges, this epitome of love draped in white offers a spellbinding sight and serves as one of the most prominent landmarks in the city. If you are chalking out your Aurangabad itinerary, make sure to include Bibi Ka Maqbara in your list of must-visit attractions.

What’s so unique about this marble structure? And why was it modeled on the Taj? Here’s everything you need to know about Bibi Ka Maqbara, Aurangabad, including its history, architecture, timings, entry fee, lesser-known facts, and much more.

It was in 1637 that Aurangzeb married Dilras Banu Begum, who was a Persian princess belonging to the Safavid Dynasty. She was not only the first wife of the emperor but also his chief consort and favorite partner. During the twenty years of their conjugal life, the couple had five children. After the birth of Muhammad Akbar, their fifth child, she suffered from postpartum infections and fever that finally snuffed out her life a month later, on 8th October 1657.

Deeply saddened by her demise, Aurangzeb commissioned a classic Mughal tomb in 1660 to serve as her final resting place. The edifice was constructed in 1668-1669.  It was named Bibi Ka Maqbara where Dilras Banu Begum was laid to rest under the posthumous title of Rabia-ud-Daurani, meaning Rabia of the Age.

The impeccably designed Bibi Ka Maqbara covers an area of 15000 square feet and stands amidst a quadrilateral Char Bagh garden, surrounded by a huge enclosure. Pillared pavilions, bastions, and arched recesses with pilasters topped with small minarets are some of the features that define the enclosure walls. A pathway with several fountains on either side leads up to the main structure from the entrance.

A fine example of the Mughal architecture, Bibi Ka Maqbara is located on a raised square platform that is 19 feet high. Four minarets, each with a height of 72 feet and featuring 144 stairs that lead to the top, stand at the four corners of the platform. There is also a mosque to the west of the structure. The portion up to the dado level and the dome are constructed in marble while the rest of the tomb features basaltic trap construction.

Fine plaster and stucco decorations adorn the body of the mausoleum. The crypt containing the mortal remains of Dilras Banu Begum is located below the ground level. An exquisitely designed octagonal marble screen surrounds the crypt that can be approached through a flight of stairs.

There is no doubt that Bibi Ka Maqbara is one of the finest structures and a top tourist attraction in Aurangabad. It is often referred to as Dakkhani Taj or the Taj of Deccan as it was modeled on the iconic Taj Mahal. Today, the gardens and fountains may not be in their best condition, but that doesn’t diminish the beauty and appeal of the mausoleum.

Things to See in the Bibi Ka Maqbara Complex, Aurangabad

Bibi Ka Maqbara has several attractions within it that display the architectural grandeur of the Mughal period. These include:

Bibi Ka Maqbara is not just a tomb, but a timeless structure that testifies to Aurangzeb’s love for his wife. Take out some time during your Aurangabad tour to visit this monument that provides glimpses into the personal life of the Mughal ruler who ruled over the subcontinent for 49 years! 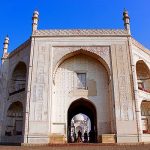 Top 10 Places to Visit in Aurangabad 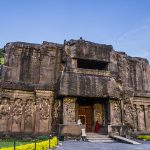 Your Definitive Guide to the Best Things to do in Aurangabad is here!