Ahmedabad is an amazing city with a vibe of its own. If you take a trip down its busy roads and lanes, you will come across an urbanized metropolis that takes pride in being a buzzing textile hub and an educational center. What’s most fascinating about Ahmedabad is that it celebrates its love of life and all things modern without compromising on its heritage and history. The magnificent temples that dot the city stand as an excellent example of this. A treasure trove of architectural beauty, Ahmedabad’s temples are no less than mesmerizing experiences in themselves. Want to know more about the incredibly beautiful sanctums adorning the landscape of Gujarat’s largest city? Here’s our pick of the famous temples in Ahmedabad that are a must-visit.

Read further to know more about these temples. 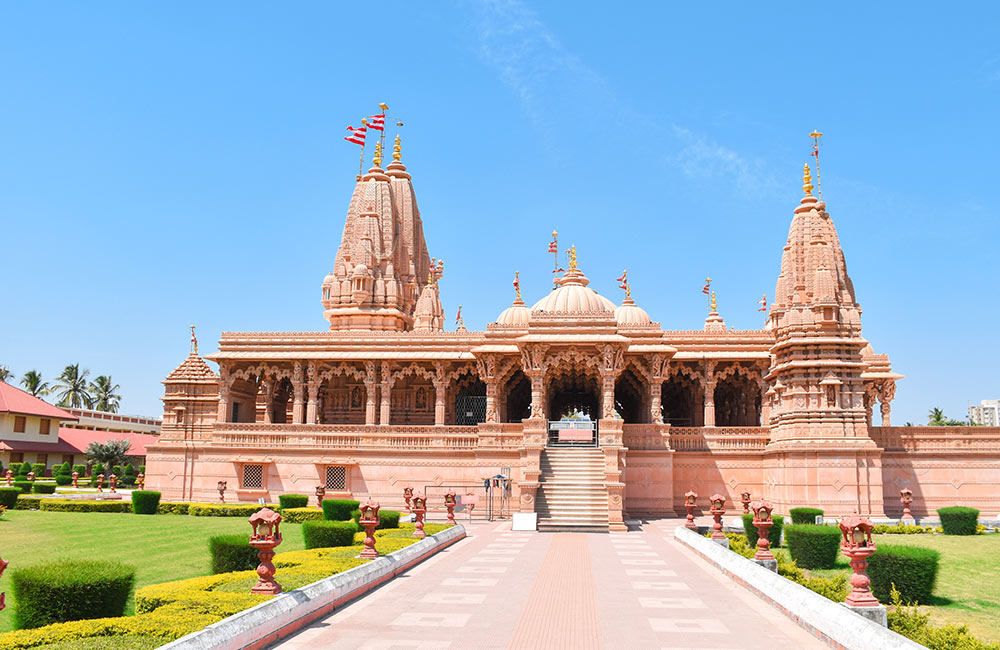 Akshardham speaks the language of architectural magnificence in no uncertain terms. A drive of just 40 minutes from the city center will take you to this intricately carved pink sandstone structure that is 108 feet in height, 131 feet in width, and 240 feet in length. The temple is dedicated to Lord Swaminarayan and his philosophies about life. It is housed within a 23-acre complex and features an enticing mix of domes, balconies, carved pillars, and sculpted figures. One of the highlights of the temple is the seven-foot-tall gold-plated idol of Lord Swaminarayan, placed in the central chamber. The light and water show called Sat-Chit-Anand is another crowd-puller that draws devotees and tourists alike. With more than two million people visiting this grand shrine every year, it counts among the most popular tourist places to visit in Ahmedabad. 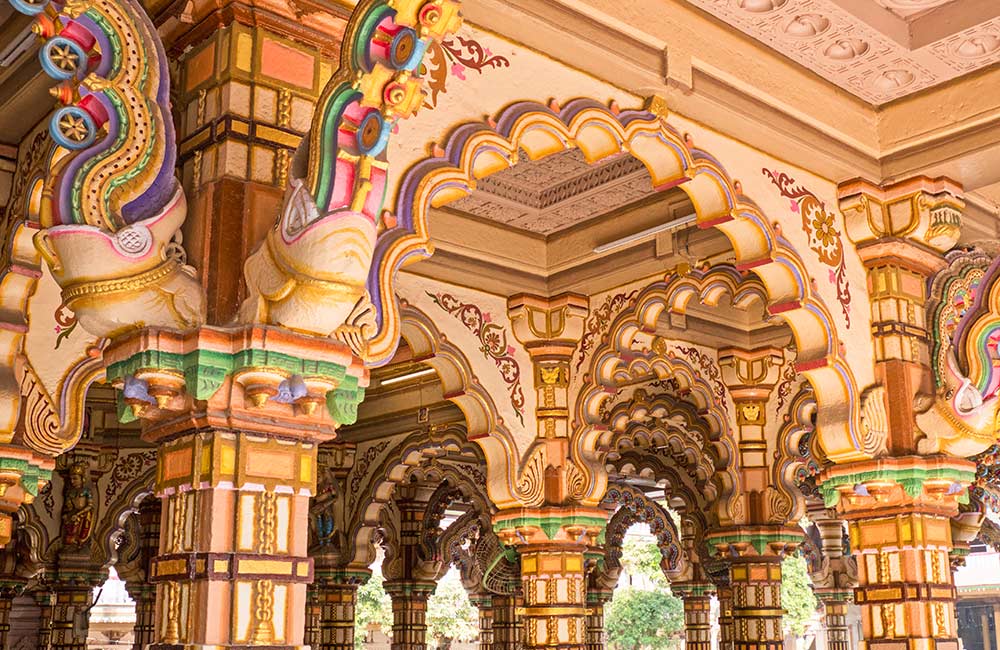 Swaminarayan Temple is an amazing structure carved in Burmese teak wood. You will find opulent carvings adorning its columns and arches while the vibrantly painted arches and brackets add a unique flair to the whole structure. It is a temple dedicated to the worship of Nar Narayan Dev and the temple complex consists of several edifices, each an architectural beauty in itself. Among the main structures of this shrine complex are the Nar Narayan Temple, Akshar Bhawan, Rang Mahal, Temple for Women, and two Havelis (mansions). Located in the eastern side of the old city, it stands as one of the most popular temples to visit in Ahmedabad. The Heritage Walk of the city, which counts among the most popular things to do in Ahmedabad, starts from this temple. 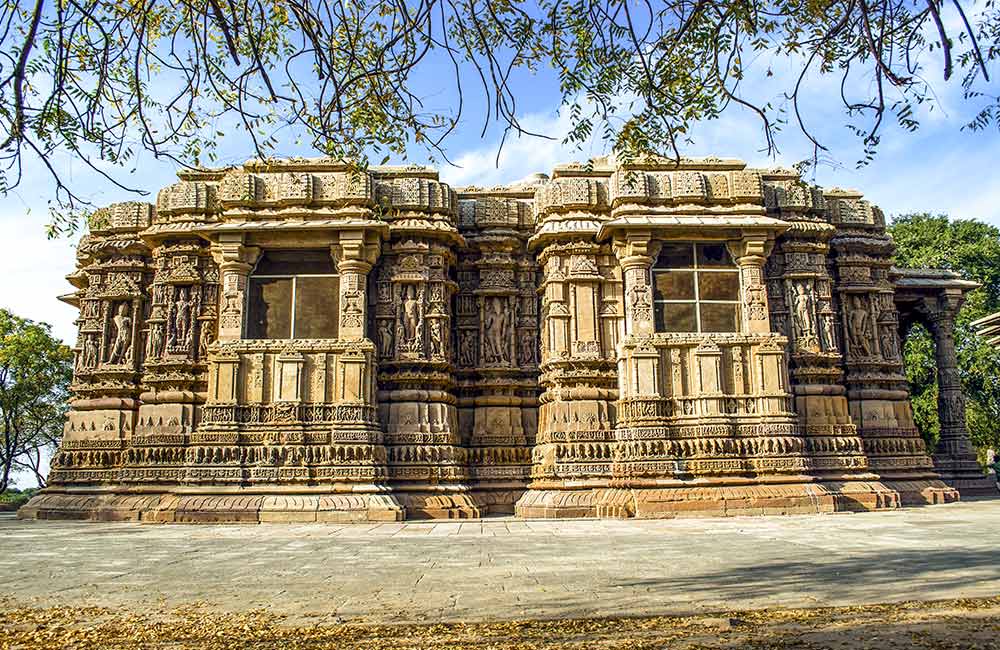 Sun Temples are not a new concept in India and you might have come across more than one during your trips across the country. However, the one located in Modhera village near Ahmedabad is definitely worth a visit. Dedicated to the mighty Sun God or Surya Devta, this temple offers a glimpse of ancient architectural splendor. It is believed that the temple dates back to the 11th century. The architectural flair of the temple corresponds to the Maru-Gurjara style, which is also known as the Chaulukya style. The temple isn’t in a functional state now and has been declared a protected monument by the Archaeological Survey of India. That said, this intricately carved shrine demands your time and attention due to its majestic structure and artistic beauty. Among the major attractions of this Gujarat temple is the water tank called Suryakund or Ramakund that is decorated with a number of miniature shrines. 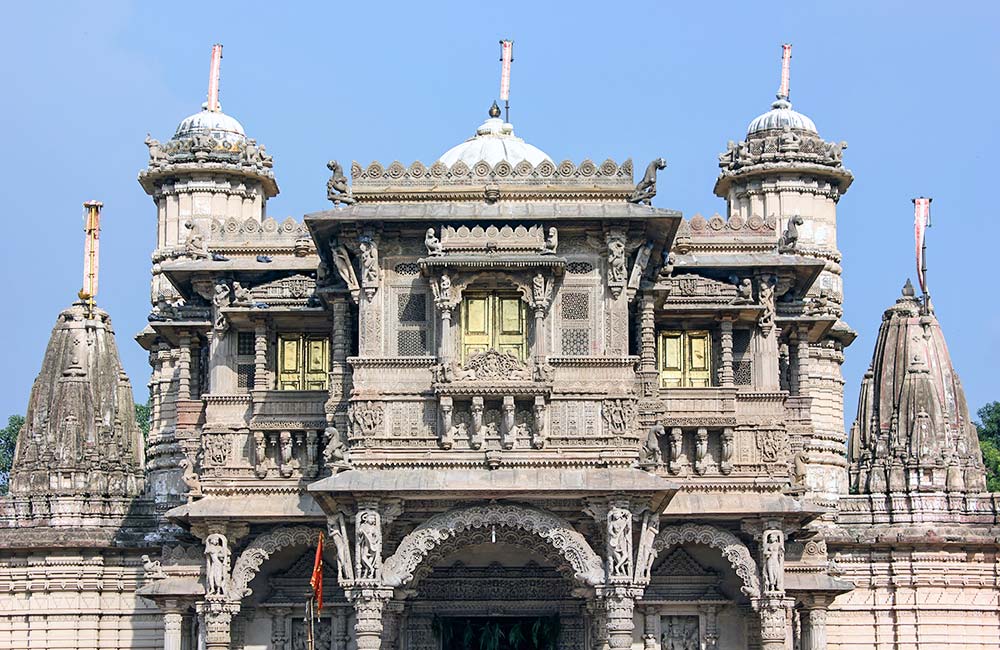 It was a wealthy trader from Ahmedabad, named Shet Hathisinh Kesarisinh, who initiated the construction of this temple in 1848. Considered to be the most celebrated Jain shrine in the city, this Ahmedabad temple pays obeisance to Dharmanatha, who is recognized as the fifteenth Jain Tirthankar. But what draws tourists to this grand marble structure is its exceptional artistic beauty that reflects immaculate craftsmanship. A beautifully ornamented dome-shaped structure adorns the front of this temple. The main shrine features twelve ornate pillars and a large dome. There are 52 smaller shrines, each containing an image of a Tirthankara. A unique feature of this temple is that it has a Manastambha or column of honor that draws inspiration from the Kirti Stambha at Chittorgarh Fort in Rajasthan. 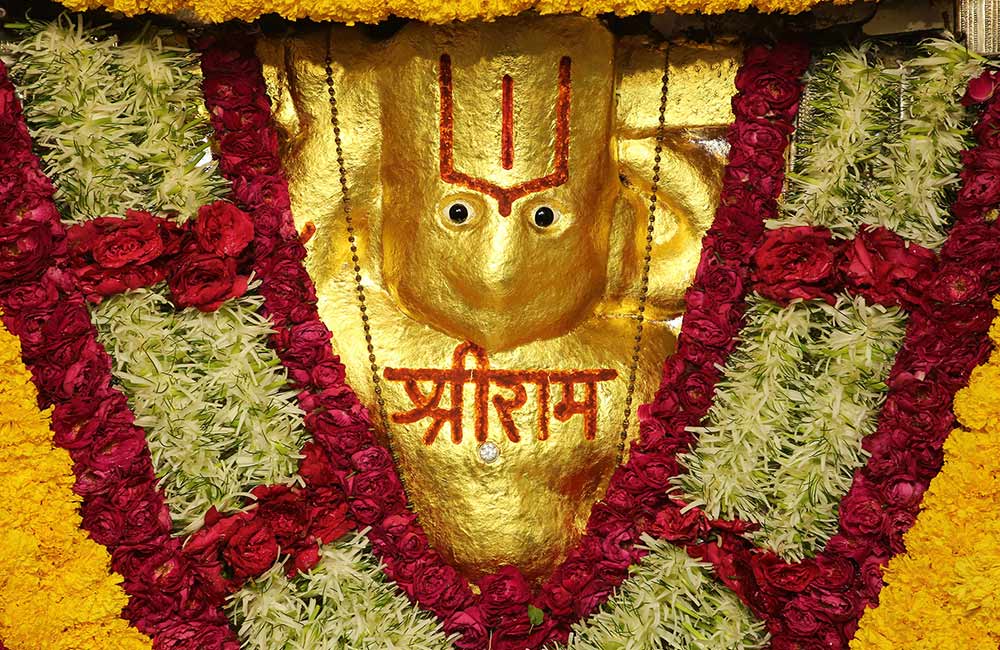 When you are talking about the most enticing temples around Ahmedabad, you can’t give a miss to the Camp Hanuman Temple. Located in the Ahmedabad Cantonment, this beautiful shrine built by Pandit Gajanan Prasad traces its origins back to around a hundred years ago. It is regarded as one of the biggest Hanuman temples in India and houses a gold-plated statue of Lord Hanuman in its inner sanctum sanctorum. It is believed that the statue can work miracles. Such is the fame of this temple that it has seen noted visitors like former Prime Ministers of India, Smt. Indira Gandhi and Mr. Atal Bihari Vajpayee.  If you are not comfortable dealing with huge crowds, avoid visiting the place on Tuesdays and Saturdays, when it witnesses a rush of the deity’s devotees. 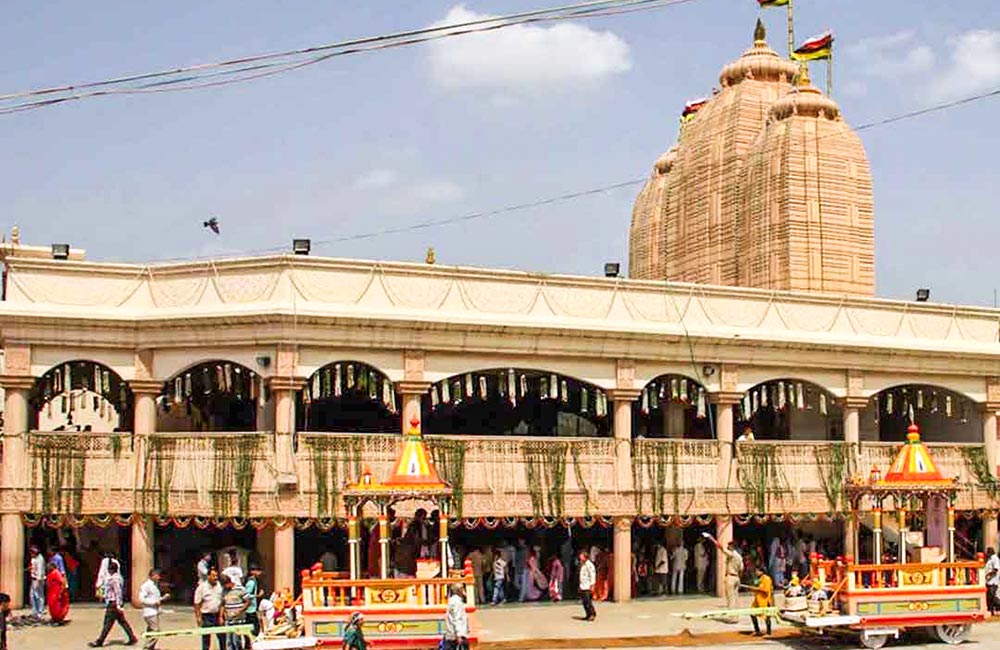 While most people know about the celebrated Jagannath Temple in Puri, many people across India are unaware that a shrine dedicated to the same deity exists in Ahmedabad as well. Jagannath Temple is considered to be one of the prominent names in the Ahmedabad temples list. The temple houses the idols of Lord Jagannath, his elder brother Balabhadra, and younger sister Subhadra. Like the other famous temples near Ahmedabad, this temple too boasts of incredible architectural beauty. Established around 450 years ago, this ancient shrine witnesses a steady flow of devotees and visitors all through the year, but it attracts huge crowds during the Rath Yatra or the annual chariot festival. It is the third largest Rath Yatra festival celebrated in the country, after the ones in Puri and Kolkata. 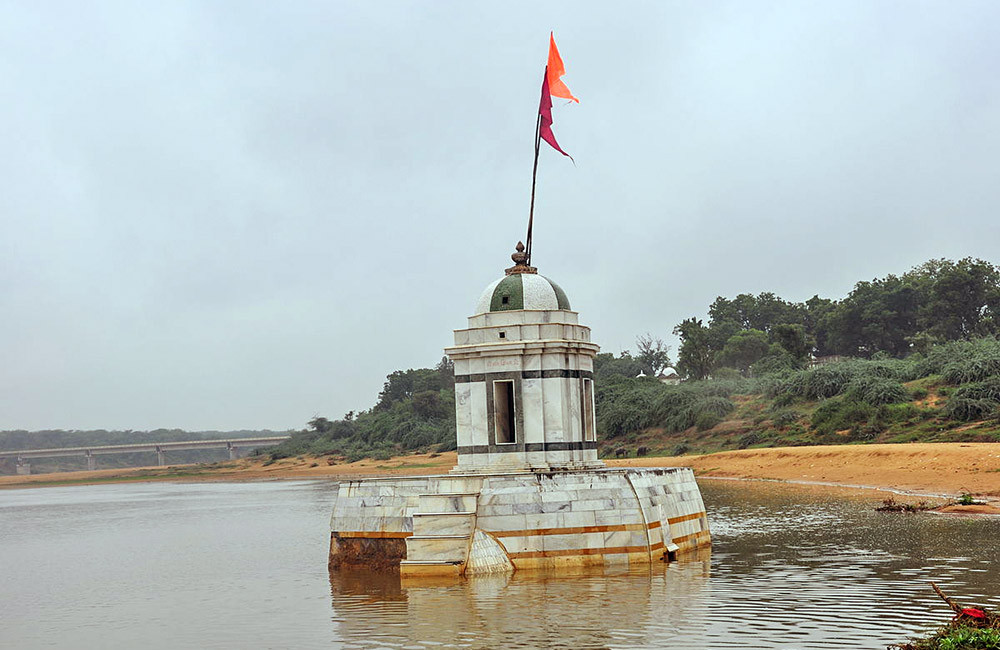 About 54 km from the city center stands one of the oldest Shiva temples in Ahmedabad, the Utkanteshwar Mahadev Temple. This ancient temple is located on the banks of river Vatrak and dates back to more than 2000 years. It is believed that even if one has completed the Char Dham Yatra and paid a visit to all the 68 tirth sthans (pilgrimage spots), the pilgrimage remains incomplete without a visit to Utkanteshwar Mahadev. During the Hindu month of Shravan (July – August), the temple remains crowded with the inflow of devotees and visitors from all parts of Gujarat and beyond. Read also – Churches in Ahmedabad 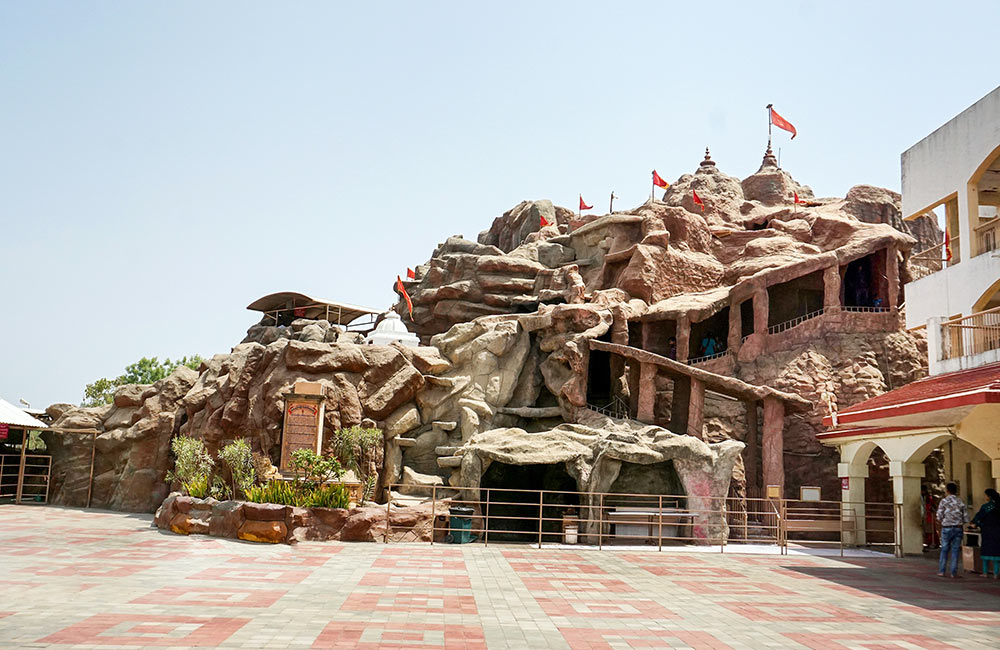 Ahmedabad has its own version of the famous Vaishno Devi Temple that exists in Katra, Jammu and Kashmir. The similarity does not end with just the names. The structure of the Vaishno Devi Temple in Ahmedabad has also been inspired by the original temple. The temple is dedicated to Goddess Vaishno, who is an incarnation of Goddess Durga. Just like the temple in Katra, this temple too holds a special place in the hearts of the devotees and is full of visitors at any time of the year. The temple turns into a splendid sight during the Navratri celebrations when it is beautifully decked up. Read also about forts near Ahmedabad

While on your quest to discover the best temples near Ahmedabad, do not miss out on the other attractions that the city has to offer. Ahmedabad is a lovely city with a great dining and shopping scene. You can indulge your taste buds at some of the best restaurants in Ahmedabad to get a taste of the authentic Gujarati cuisine. Also, the malls in Ahmedabad are wonderful places for some retail therapy. In short, this is a city that has everything for you to spend a good time. So, why wait any longer? Isn’t it time you booked a room at one of the best budget hotels in Ahmedabad and started exploring the city’s delights?