7 Best Churches in Lucknow to Visit

Lucknow, the land of Nawabs (and kebabs!), is one of the most iconic cities of India – the home of extraordinary heritage, culture and cuisine. With a history that weaves in the Mughals, the Nawabs of Avadh and the British, Lucknow boasts of some fine architecture. We’ve all heard of the Bhulbhuliyya, Bara Imambara and Rumi Darwaza. But did you know there are many churches in Lucknow too worth exploring? Witnesses to its (sometimes) tumultuous history, these churches were constructed by the British and hold many stories within their walls. Want to know more about them?

Read on to get a ringside view of what to expect from these Seven churches in Lucknow.

Locally popular as just ‘Cathedral’, St. Joseph’s Cathedral is hard to miss because of its imposing façade, and the fact that it is situated in Hazratganj, the city’s central market (Shopping Places in Lucknow). It was constructed in 1860 by the Irish priest, Fr. William Gleeson as a modest, Gothic-style building which could seat up to 300 people but it had to be pulled down in 1969.

The present grand and graceful structure was built in its place and is visited by thousands of devotees and tourists alike. People come here for not only the spiritual energy and calm it provides but also the uncommon architecture, featuring a crescent-shaped façade and a wide staircase with a statue of Christ at the top. The main prayer hall is spacious, with religious images and paintings adorning its walls.

A must-visit church in Lucknow, the Cathedral hosts a Christmas Gala and is incredibly beautiful during this time, illuminated and inviting. 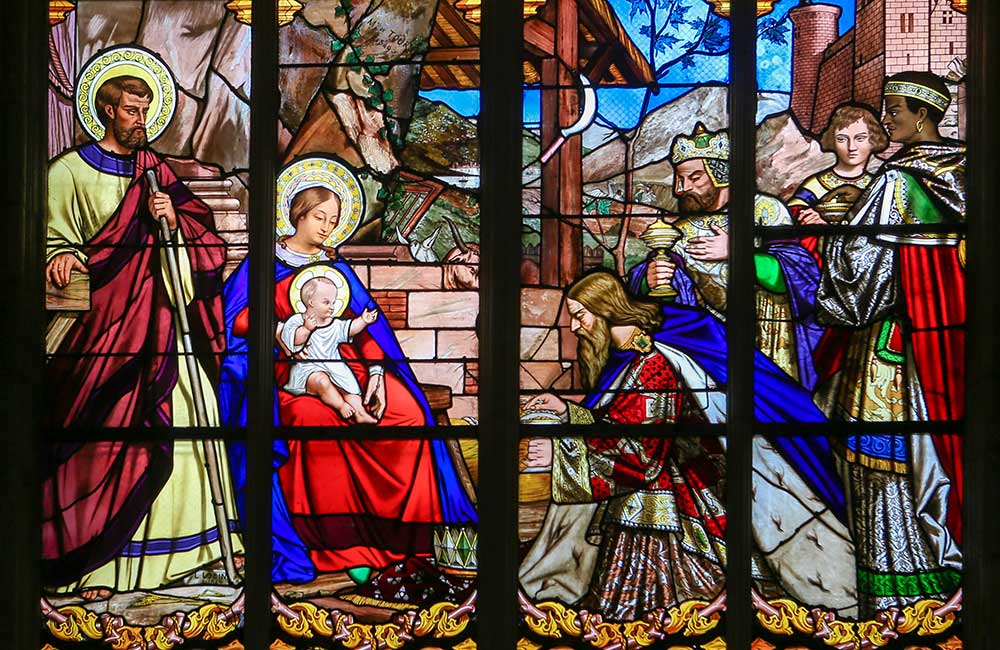 Christ Church | #2 of 7 Churches in Lucknow

The oldest of churches in Lucknow, Christ Church holds the distinction of being the first Anglican Church in North India and probably the third in the country, built by the British. Its predecessor was St. Mary’s Church situated inside the Residency, a historic building constructed by the then ruler of Avadh – Nawab Saadat Ali Khan. During the first Indian independence war of 1857, the church was heavily shelled and completely destroyed. For the next few years, the church’s service was held inside the tomb of Nawab Saadat Ali Khan until the present building was constructed in 1860.

Designed by Lt. Swetenham of The Royal Engineers, the present-day building is built in neo-Gothic style with a prominent tower and arched Gothic windows. The real beauty you don’t want to miss in this brick and stucco structure is the huge prayer hall with a beautiful ceiling, memorial plaques for fallen soldiers and stained glass murals depicting tales from Jesus’ life.

Read More: Things to do in Lucknow 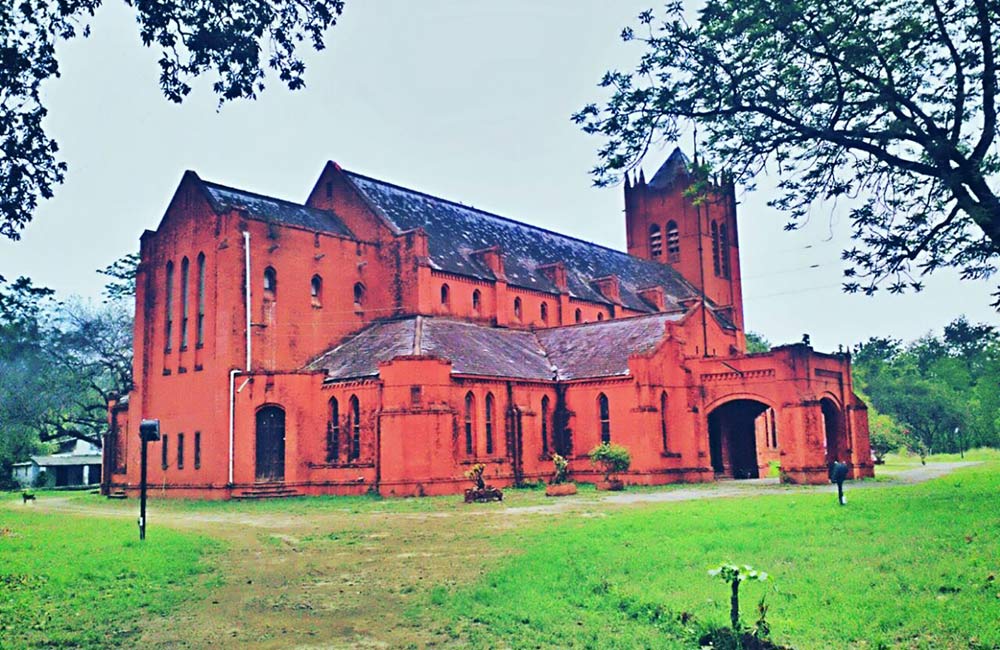 All Saints Garrison Church | #3 of 7 Churches in Lucknow

As the name suggests, the All Saints Garrison Church was built primarily for the British soldiers stationed in the city. Although most of the military settlement grew area around the Residency, they had to move when the complex was destroyed in 1857. And so the new cantonment area was developed, complete with churches for the officers and their families living there. The most prominent of these churches is the red-bricked All Saints Garrison Church, standing amidst the green of the quiet cantonment area.

Constructed in 1860, the original building was later changed to the current one and designed by a British engineer named Jones Ransome. A stone plaque commemorates the site where the pulpit of the original church lays. A remarkable feature of the church is that the pews have space to hold a gun!

On the whole, the All Saints Garrison Church is an affable, if slightly deserted, church in Lucknow and is worthy of a visit.

4. Church of the Epiphany, Lucknow 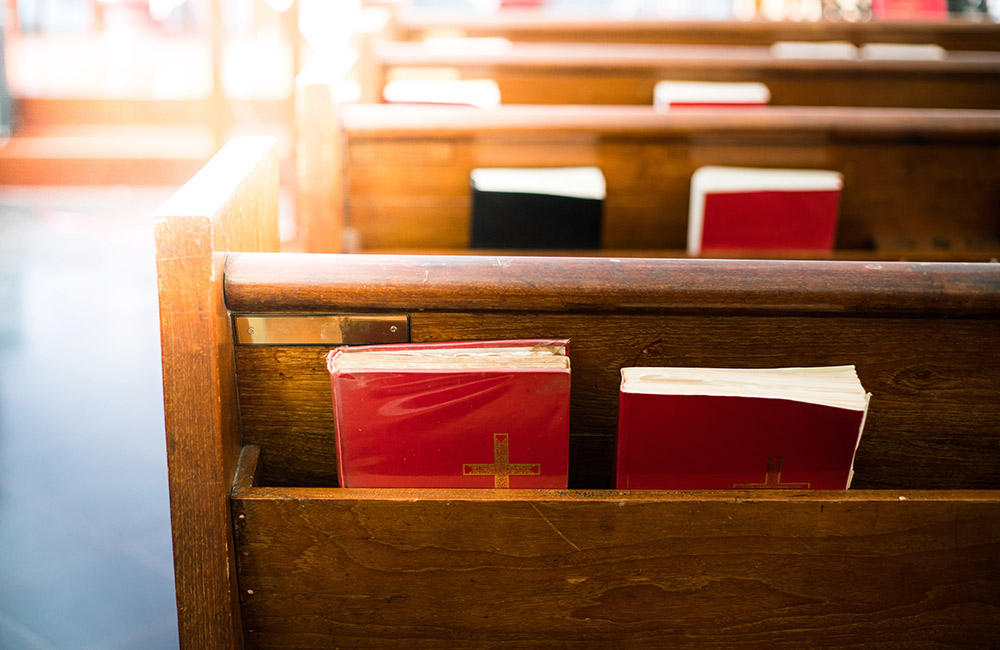 Church of the Epiphany | #4 of 7 Churches in Lucknow

One of the hidden gems among churches in Lucknow, the Church of the Epiphany is a sight for sore eyes with its red brick façade and calm interiors. While its construction was completed in 1877, this French & Gothic-style church, located in what once was the Zahoor Bakhsh Compound in Lalbagh, actually began to be built in 1858.

At the first glimpse, you can’t miss out on its imposing five-storeyed tower, turrets and arched windows. A wood altar, from where the first priest of the church, Reverend W. T. Storres gave his firm sermon, can still be seen today. Walking around in the church compound, amid its lush green trees and pathways can transport you back to colonial times! 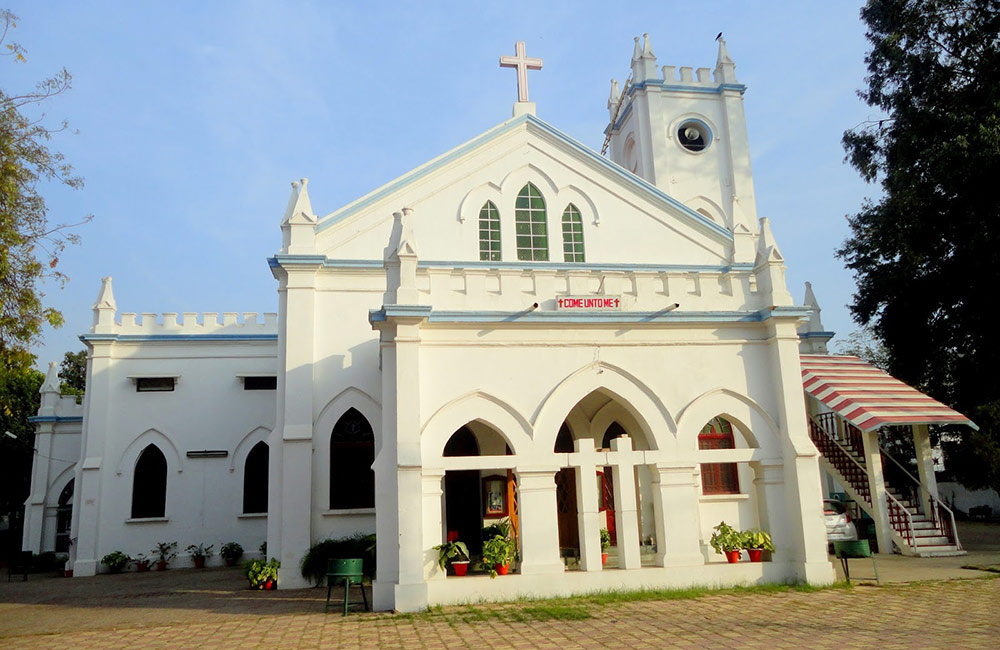 Built by the Methodist mission in India, the Lalbagh English Methodist Church was originally intended for the native Christian population of the city. It was unarguably, the first ‘Indian’ Church, where Indians would be allowed as opposed to other churches in Lucknow that were specifically meant for the British.

Completed in the year 1869, the church stands in front of Dayanidhan Park and adjacent to Noor-Manzil Psychiatry Centre. With its white-washed exteriors, modest interiors and the willingness to welcome all, this beautiful church in India is definitely a must-visit for its historical value.

When the young Irish priest, Reverend William Gleeson (who helped build the Cathedral in Hazratganj), was sent to Lucknow in 1858 to replace the previous reverend – Father Adeodatus, he saw the need for another church in the area. He quickly set to work and for starters, sold the land of the former mission at Golaganj. With the proceeds of the sale, a grant from the Government as well as subscriptions from the public and future parishioners, Father Gleeson built two new churches.

One of these was the St. Paul’s Church, built at Dilkusha to provide for Catholic soldiers living in the new cantonment. The church was completed in 1861 and remained in use for following years. It is still visited by devotees. One of the oldest churches in Lucknow, this serene place of worship must make it to your list of attractions for its simplicity and historic value.

St. Peter’s the Railwaymen’s Church is the first to have a woman priest presiding over the congregation. It serves the Protestant Anglican communities of Charbagh and Alambagh and had its foundation stone laid by the Bishop of Lucknow George Herbert in 1914. This is also one of the first churches in the city to have the 10 Commandments displayed in Hindi.

Several renovations, additions and changes have taken place in the church over the years, and though modest, St. Peter’s Church is a handsome building to explore in Lucknow.

These historically significant churches in Lucknow have been witness to its regal past and are steeped in stories. Each one is worth a visit, and the intrepid travelers might even be able to discover some other old, forgotten churches if they explore a little. If you know of another church that belongs in this list, tell us about it in comments below.