India’s 12 Iconic Pre-Independence Era Eateries: Get a taste of the past at these famed restaurants

Budget Hotels > Travel Blog > India > India’s 12 Iconic Pre-Independence Era Eateries: Get a taste of the past at these famed restaurants

Fancy a trip back in time? To the days before TV and multiplexes? Days when everyone (mostly) cycled to work and school, week-long weddings, picnics in the park and food that did not come out of a box? If only you had Michael J Fox’s De Lorean and Doc Brown to help! 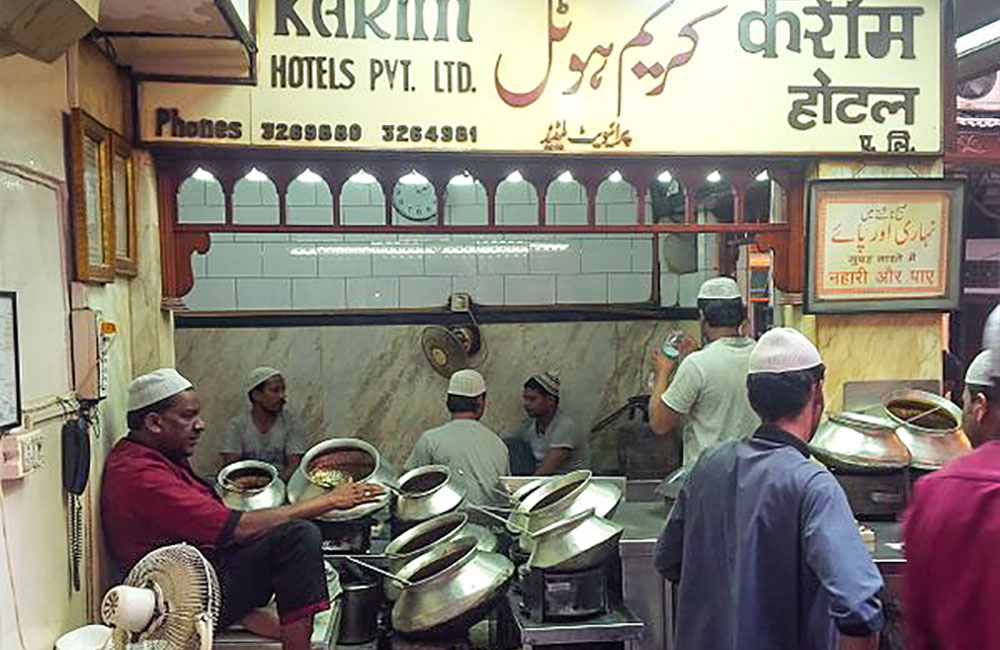 Started by Haji Kareemuddin in 1913, Karim’s has been synonymous with delectable Mughlai cuisine in India. Many a 5-starred establishment has showcased the cuisine of the emperors but you’ll keep coming back to Karim’s for its sumptuous cooked-all-night Nihari for breakfast, the really rich Badam Pasanda, Paya and the Chicken Jehangiri. Karim’s began as a small place in Galli Kababian in Jama Masjid and has today spread out to several locations. Legend has it that the original cooks at Karim’s came from the royal kitchens of Shah Jahan and Bahadur Shah Zafar! How’s that for iconic? 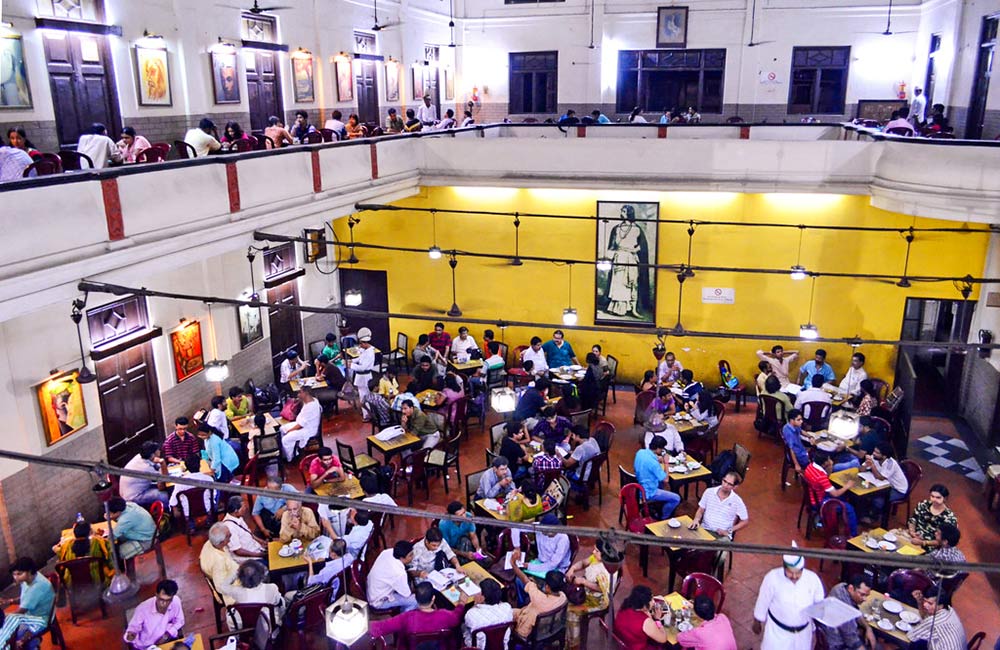 Some intellectualism over omelets and hot coffee? Head to the Indian Coffee House on the (equally iconic) College Street in Kolkata where for over a 100 years personalities like Rabindranath Tagore and Subhash Chandra Bose have done exactly the same. High-ceilinged and unpretentious, the Indian Coffee House is not really known for its delicious food but as a part of our heritage. The perfect place to do some typical Kolkata adda-baji (your food will take at least a half hour to appear), have your stare-into-space moments without anyone caring and to become a part of history, this coffee house is one of the most loved eateries from the pre-independence era.

3. Britannia and Co. in Mumbai 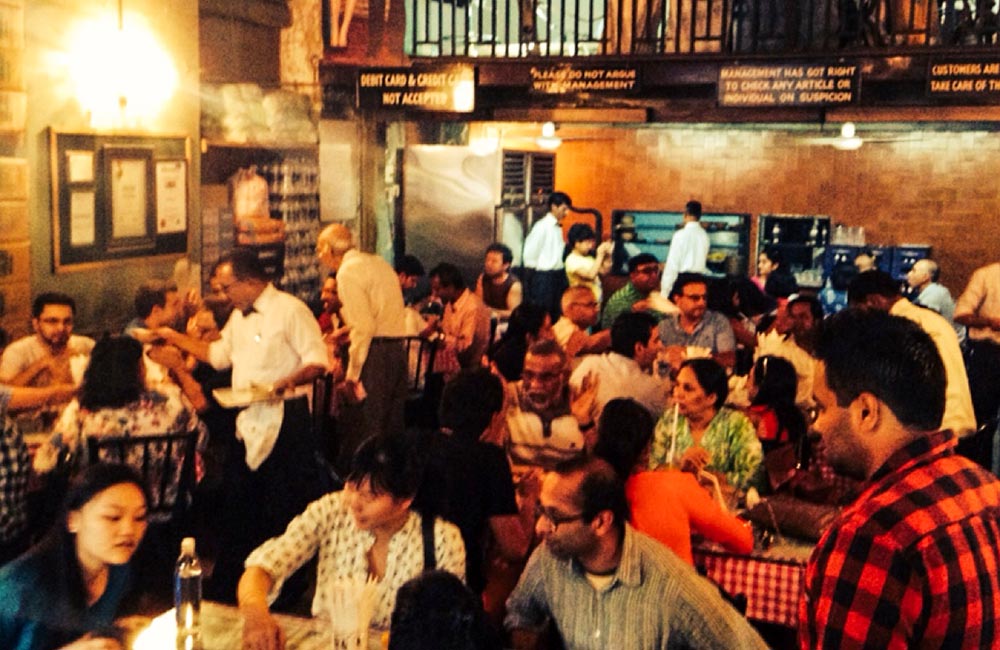 Britannia and Co. | #3 of 12 Best Restaurants in India

If you’ve ever been to Mumbai, at least one person (usually more) has told you to not leave without a tummy full of the ‘berry pulao’ at Britannia’s. They’ll tell you the owner, Boman Kohinoor imports the berries from Iran. The only way to find out is to go to Ballard Estate, where this iconic eatery is located and order this famed dish (also the salli boti and the caramel custard) do be quick since the restaurant is open only till about 4 pm! Atmospheric and warm, Britannia has barely changed since the day it first opened to British officers stationed in the area. It even has the original Brentwood furniture from Poland, imported by the previous generation! In the face of the dwindling number of authentic Irani restaurants in Mumbai, Britannia holds its own, partly due to its simple yet delicious Irani and Parsi (courtesy Boman’s late wife, Bachan, who was a Parsi) dishes, its international fame and ultimately the octogenarian Boman Kohinoor, who makes sweet small talk with you, often takes your order and insists on you having a fresh lime soda, whether you want it or not. You’ll ultimately fall for it. 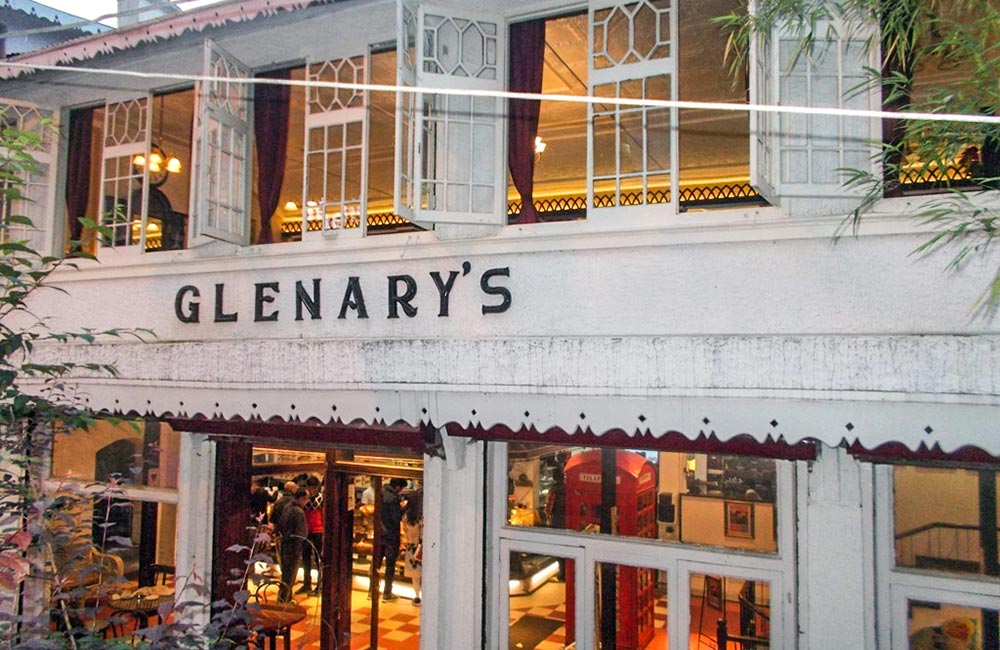 When someone says Darjeeling you instantly think of tea, right? But once you’ve been to the quaint and atmospheric Glenary’s, you’d think of the bakery’s delish cakes, muffins and chocolates too. Just a short distance from the Mall, Glenary’s was originally named Vado, after its Italian owner, nearly a 100 years ago. It changed hands (and names) a few times before finally being owned by the family of the late A T Edwards, a local person. The place has seen many renovations but still retains the charming old world, peaceful element that makes it memorable. 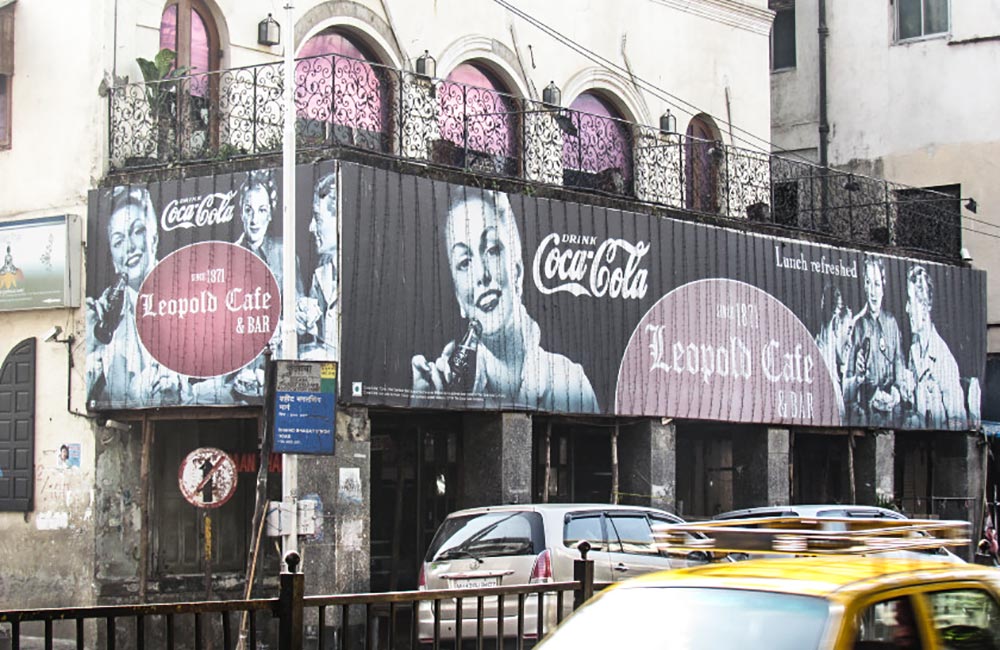 Even the raining bullets by terrorists in the 2008 Mumbai attacks could not shut the Leopold Café down. Neither have the ravages of time. Because the café that was started right after the 1857 mutiny is still standing strong on its feet. It is still belting out delicious food, a warm, happy atmosphere conducive to hours of conversations between friends. And it’s been in the same spot in the bustling Colaba neighborhood of Mumbai. You can’t make a visit to Mumbai without having a drink, a bite to eat at this iconic pre-independence era restaurant. Go, try it for the atmosphere! 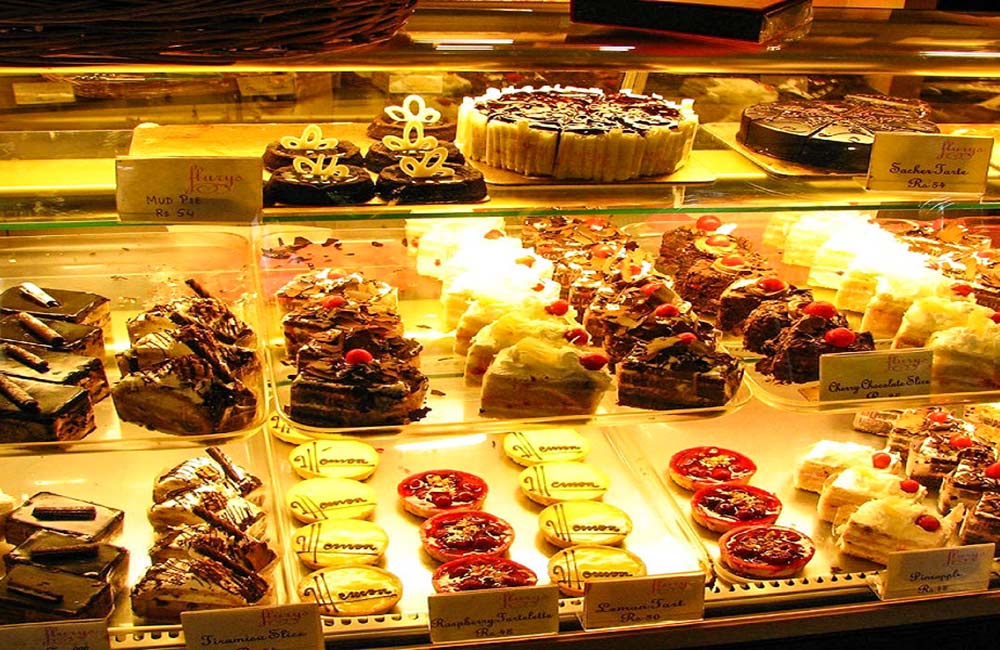 Set up way back in 1927 by a Swiss couple – Joseph and Frieda Flury – Kolkata’s iconic ‘tea-shop’ is all grown up now in its 91st year. But you couldn’t tell it’s that old looking at its mouth-watering treats – boozy plum cakes, rum balls and flaky patties among others – that ensure there’s a snaking queue outside its doors every weekend. And especially before Christmas. Set in the glamorous heart of the city, Park Street, Flurys holds sentimental value for every Kolkatan – this is the place many went to on their first dates, met old, long-lost friends at and generally had a good time. Visit it simply because legends must be paid due respect. It is another matter you’ll convert into a life-long admirer with just one trip as did the celebrated filmmaker Satyajit Ray! 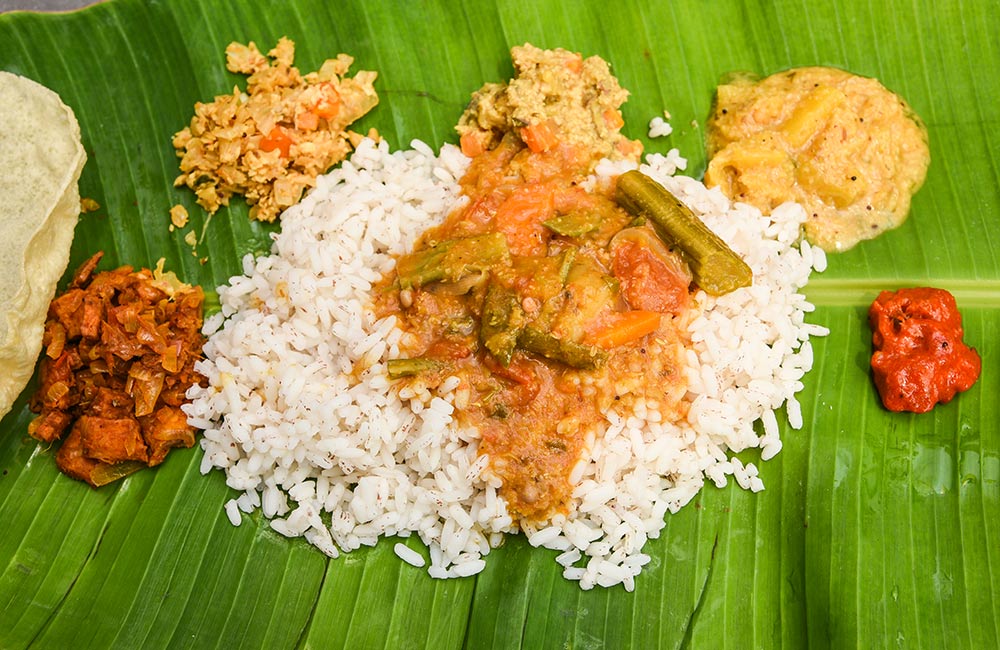 The place serves food on banana leafs and can fit only 50 people in one go. But Mylai Karpagambal is revered. For its traditional recipes that have been the same for the last 65 years since the establishment started (the original ones by the owner Mr. Prabhu’s grandma!), for its quick and efficient meals and for the true blue Madras experience it offers. 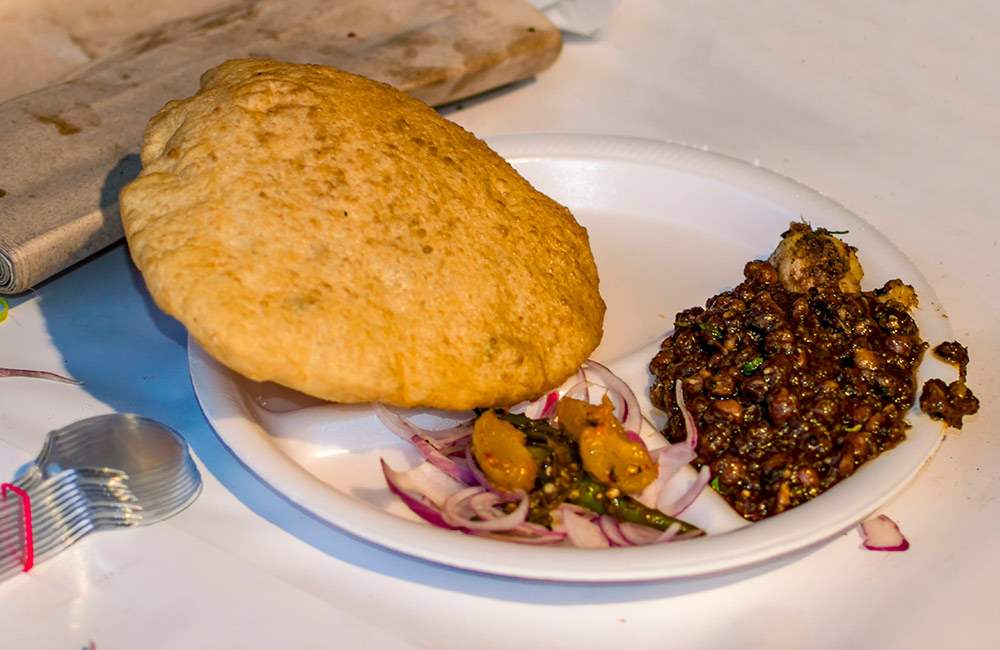 Right here is a little whiff of Chandni Chowk in faraway Shillong! The Delhi Mishthan Bhandar has been regaling the good folk of the city with finger lickin’ choley bhature, gulab jamuns and cutlets since 1930. In 2008 they made the largest ever jalebi and got themselves a place in the Guinness Book of World Records (a whopping 75 inches and 15 kg in weight!) Located in Downtown Shillong, in the popular Police Bazaar, the Delhi Mishthan Bhandar has a dedicated section for treating your sweet tooth. They’ve got to be good, they’ve been at it for 88 years! 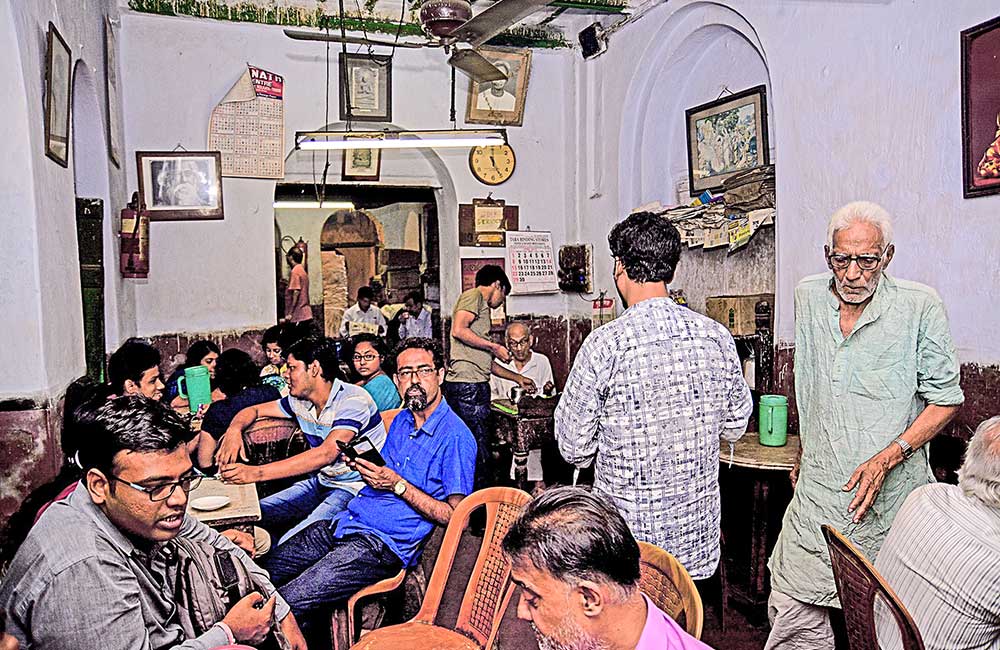 Started by Nutan Chandra Barua and his elder brother Gaur Chandra Barua in 1918, Favourite Cabin is at best nondescript. A few wobbly chairs and marble tops that have seen better days. But this is one of Kolkata’s favorite haunts! Why? It was once the favored adda (place) for freedom fighters (the owners were great supporters of the Swadeshi Movement) and was the epicenter of great debate and discussion on the subject. Visit it for its historic value and a glimpse into pre-independence India. 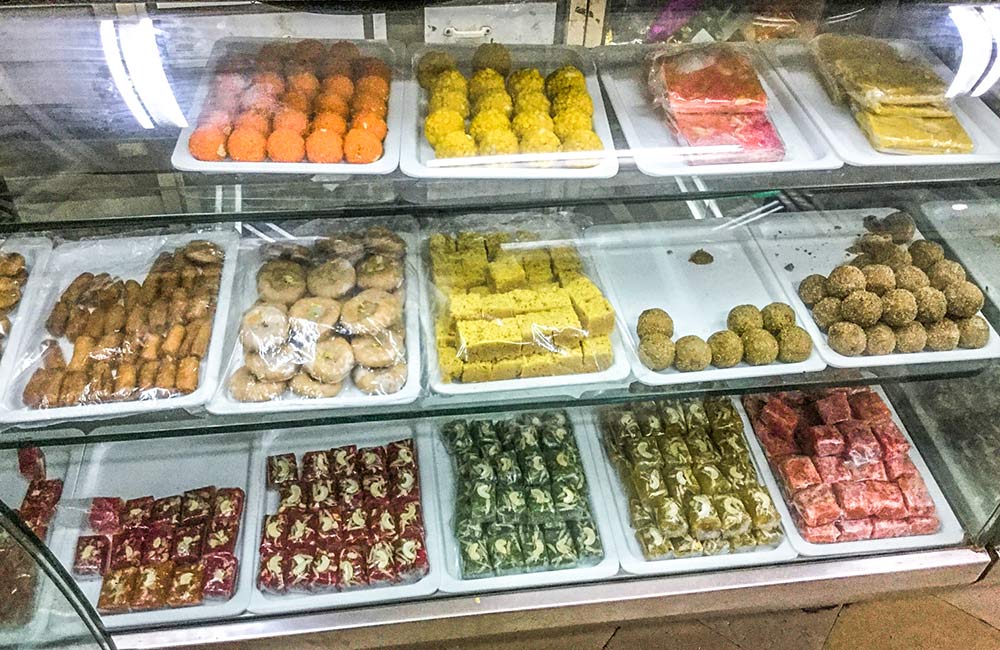 It’s just a little sweet shop in Mahim, Mumbai. But it’s been making and selling an awesome halwa for the last 200 years! Founded by Giridhar Mavji, this is a quaint little place that has been going about its business quietly for 2 centuries and deserves a mention in this list not just for its mouthwatering halwa made differently from the traditional one, but for the loyalty shown to it by generations of patrons.

The halwa made by rolling out a cooked mixture of wheat, sugar and ghee in the form of sheets that is cooled and cut into delicate squares has earned its own name too – Mahim Halwa. Other delicacies to try here are the malai peda, srikhand, kaju roll and the milk cake. 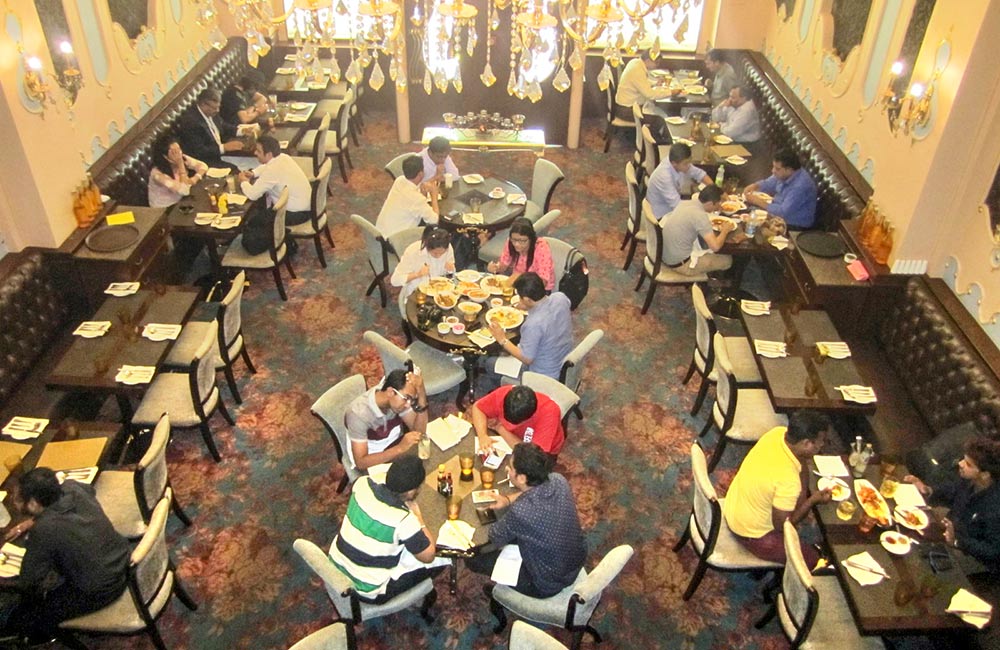 Founded in 1942, United Coffee House was one of the first few restaurants to offer fine-dining in the capital city. And dilliwalas are sentimental about stuff like that! Retaining its pre-independence era charms, this warm and welcoming place, tucked away in Connaught Place, is the regular haunt of diplomats, businesspersons and tourists. A classy eatery, United Coffee House serves more than just coffee – classic continental dishes, Mediterranean cuisine and Indian favorites. 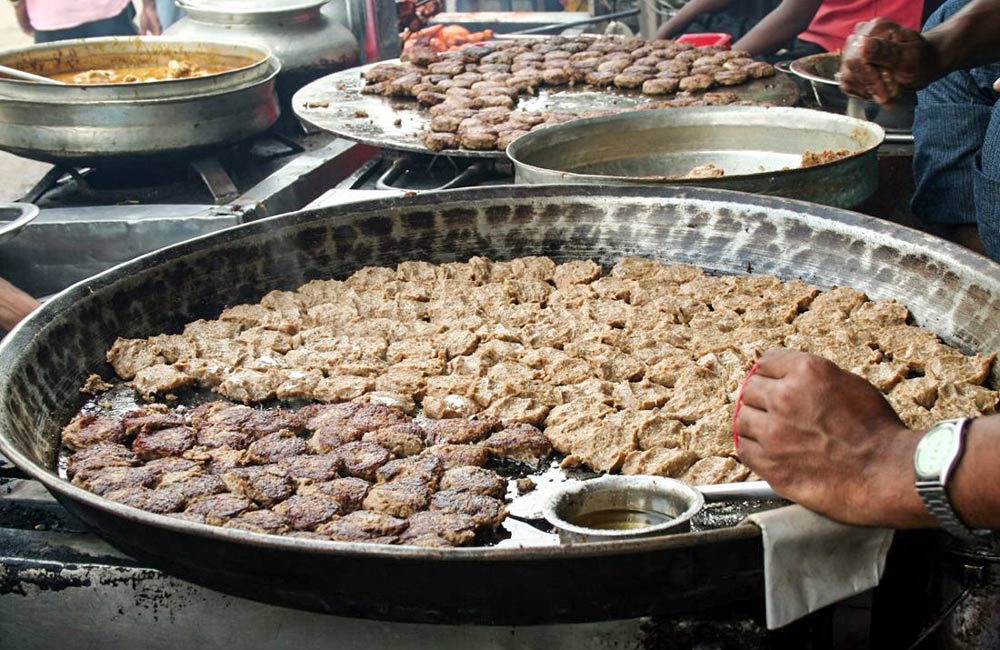 You have to have heard about Tunday Kababi! If you haven’t, count yourself off the foodie list! Because this iconic eatery, established by Haji Murad Ali in 1905, continues to regale the epicurean with its scrumptious, delectable kababs that have no match. The founder was short of one arm and hence nicknamed tundey, giving this pre-independence era gem its name. Walk in the original spot in the Phool Wali Galli in Chowk in old Lucknow or one of its many franchises across the country and sample a plateful of unforgettable kebabs.

There are so many more restaurants and eateries in nearly every region in India that should be on this list. Some other mention-worthy places are: Hariram and Sons in Allahabad, the 125-year-old Shaikh Brothers Bakery in Guwahati, Moti Mahal in Delhi, Shri Sagar, better known as CTR in Bengaluru and Chafekar Dugdha Mandir in Nagpur among a host of others.

Tell us in the comments below if you know of one in your city and if you’ve been to any of these in our list. How’s that for a taste of nostalgia?

All Restaurants shall ensure the following measures to contain the Spread of COVID-19: