Your Guide to the 6 Most Beautiful Temples in Pune

This metropolitan city in Maharashtra is known for premier educational institutions, magnificent historical structures, and beautiful ancient temples. Wrapped in intriguing legends, these old temples in Pune are visited by thousands of devotees and explorers every day. And if you are planning your trip to this city anytime soon, you should definitely pay a visit to some of the revered temples in Pune for a spiritual escape. 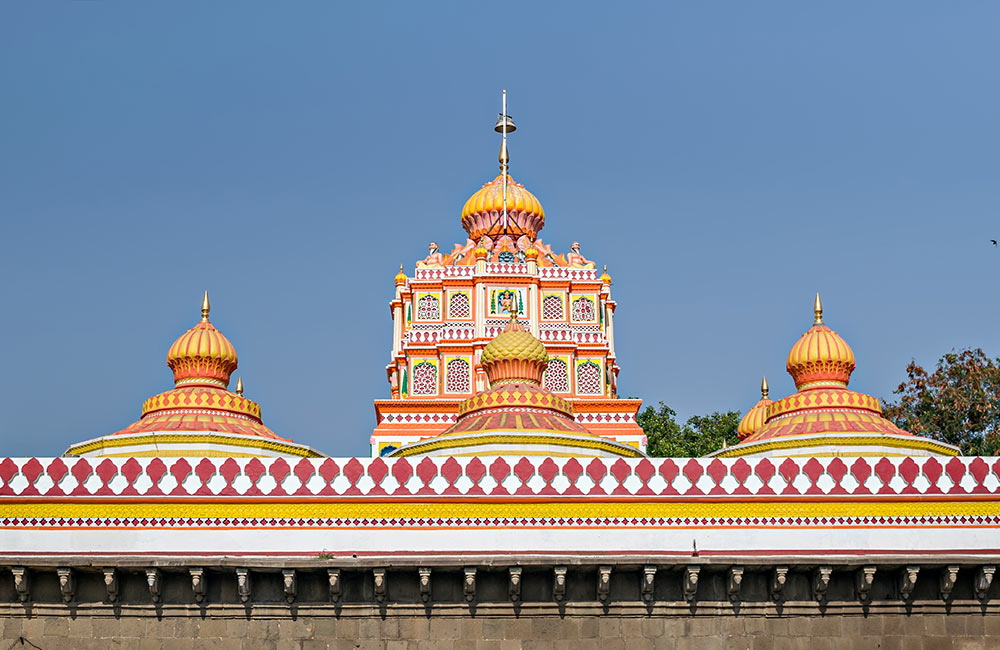 Omkareshwar Temple | #1 of 6 Temples in Pune

Dedicated to Lord Shiva, Omkareshwar temple is one of the biggest temples in Pune. The temple is also among the most ancient temples you will find in the city as it was built under the Peshwa rule.

Complete with intricate domes and carvings, the temple’s architecture is one of the first things that will strike you and leave you in awe. Apart from the idol of Lord Shiva in the main temple, there are smaller temples as well which have idols of Lord Ganesha, Goddess Durga, Lord Shani, Lord Vishnu and Lord Hanuman.

Not only one of the most popular temples in Pune, but this one also has a historical story to go with it. Dedicated to the protector of the city – Kasba Ganpati, the temple was built by Chhatrapati Shivaji’s mother, Queen Jijabai. The idol which you will find inside the temple was founded by Shivaji’s teacher.

While the temple was visited by many, it was popularized after Lokmanya Tilak started celebrating festivals here during the freedom struggle. Since then, the temple has also become important for holding festivities related to Lord Ganesha. Do visit the temple on Ganesh Chaturthi to see the temple in all its glory. 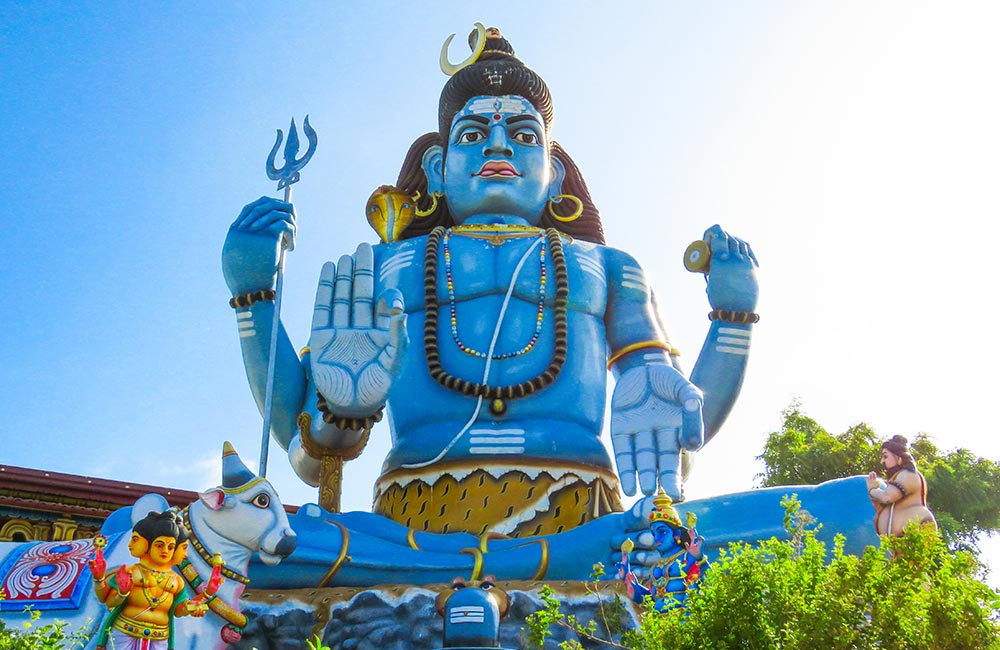 Neelkanteshwar Temple | #3 of 6 Temples in Pune

As the name suggests, this temple is dedicated to the Lord with the blue neck – Shiva. One of the most beautiful temples near Pune, Neelkanteshwar temple is situated atop a hillock, 900 metre above sea level. To reach the temple, you will have to trek for about an hour making your journey all the more worthwhile.

While the structure of the temple resembles South Indian temples, it is the aura and serenity of the temple that draws visitors. From beautiful sunsets to views of the valleys, the location of the temple offers beautiful scenery worth making that steep climb. Click here to know about forts in Pune 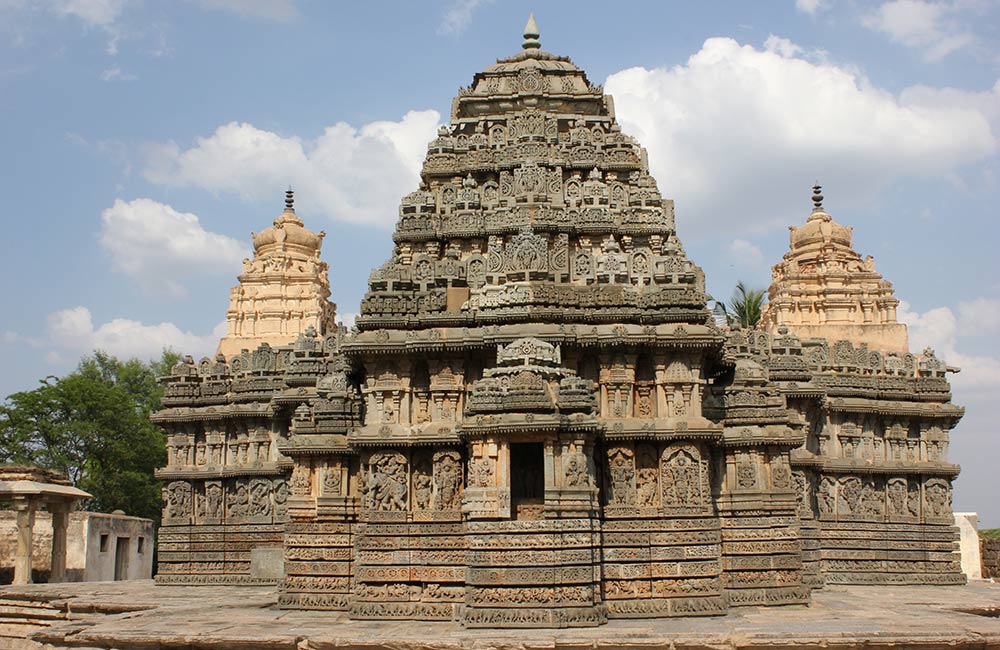 Dedicated to Lord Narasimha, one of the avatars of Lord Vishnu, Shri Laxmi Narasimha Temple is among the most beautiful temples in Pune. Built in the Peshwa architectural style with black stones, the temple took 20 years to be completed and is located on the confluence of Bhima and Nira river. This location of the temple imparts it a surreal setting and elevates the entire aura of the temple. Read also – Churches in Pune

Apart from fortifying the temple against foreign invasions, the original idol of Lord Narasimha was replaced by a duplicate due to the fear of Mughal emperor Aurangzeb. All this makes for an interesting history of the temple. However, if you want to see glorious celebrations of any Hindu festival, visit it during Vaishakha Navratra to see processions like Dahi Handi. 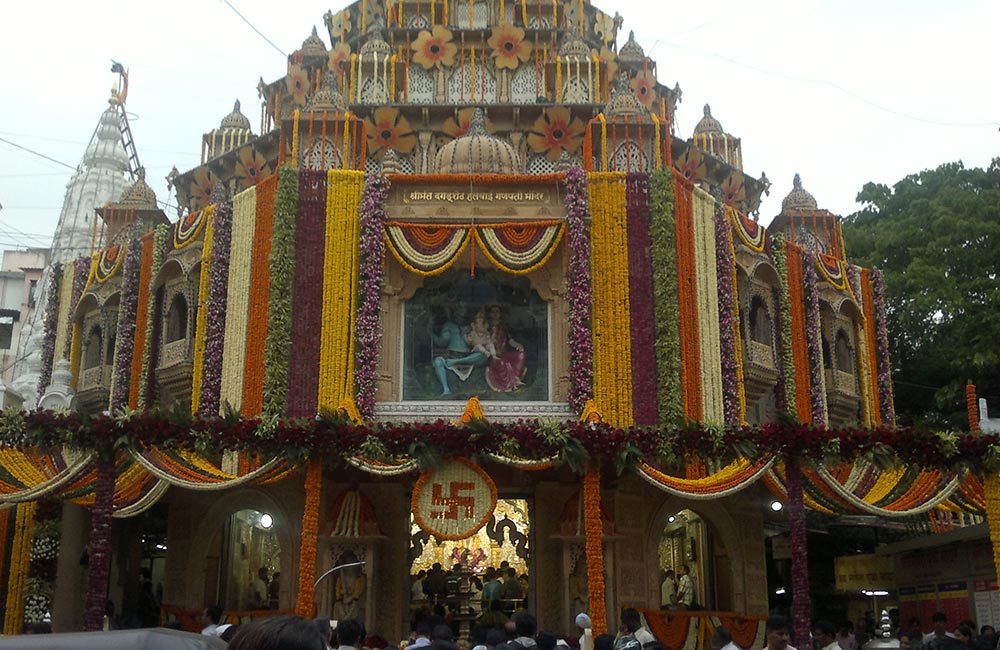 Dagadusheth Halwai Ganapati temple was built by a sweet seller named Dagadusheth Gadve. His guru suggested him to build the temple after his son died of a deadly disease.

The temple’s architecture is quite unique because this is perhaps the only temple where you can see the idol of Lord Ganesha from outside. Not only the idol, but the inner sanctum is also visible from outside making it a perfect place to celebrate all the festivals with pomp and no restrictions.

The 7.5 feet tall idol of Lord Ganesha is adorned with gold and precious gems which are offered by devotees from all over the world. 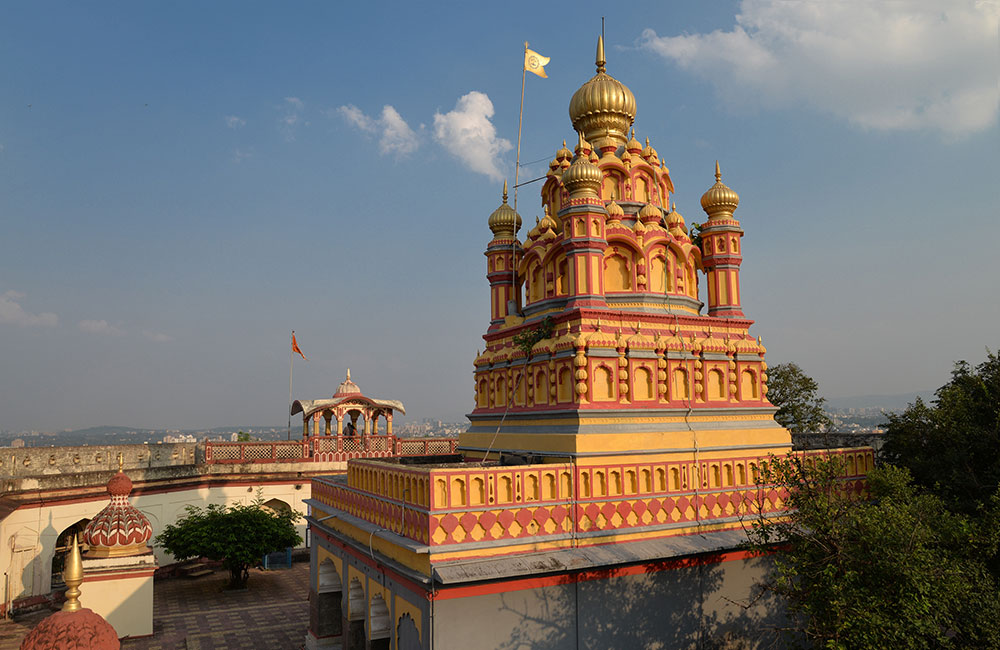 As the name suggests, the temple is located atop a hill, 2100 feet above sea level. To reach this beautiful temple in Pune, you will have to climb 103 steps. However, all the exhaustion from such a long climb will fade away when you finally see the temple, its idols and of course, the scenic view of the surrounding area.

It is said that at the same place where the present temple stands, there used to be a smaller temple (or a shrine) where Nana Saheb’s mother used to go and pray. She was suffering from a disease and she vowed to build a larger temple once she was cured. The temple was then built by Nana Sabeh, the third Peshwa.

Apart from this, there are many other small temples dotted all across the city. From libraries to forts, Pune has them all and now you know about its temples too, giving you plenty of places to visit.