Most Sacred Temples in Bangalore You Ought to Visit

Bangalore, the IT hub of India is also a city where modern-day technology exists in harmony with age-old beliefs that define our culture. The city of Bangalore is home to almost a thousand temples, big and small, with some dating back to the 9th century. A crowd puller for its several tourist attractions, Bangalore sees a large influx of tourists who flock to the city for a religious trip to the ancient temples and seek blessings. So, in today’s parlance, cleanse your soul with a visit to these temples like you would clean the viruses from your laptop. 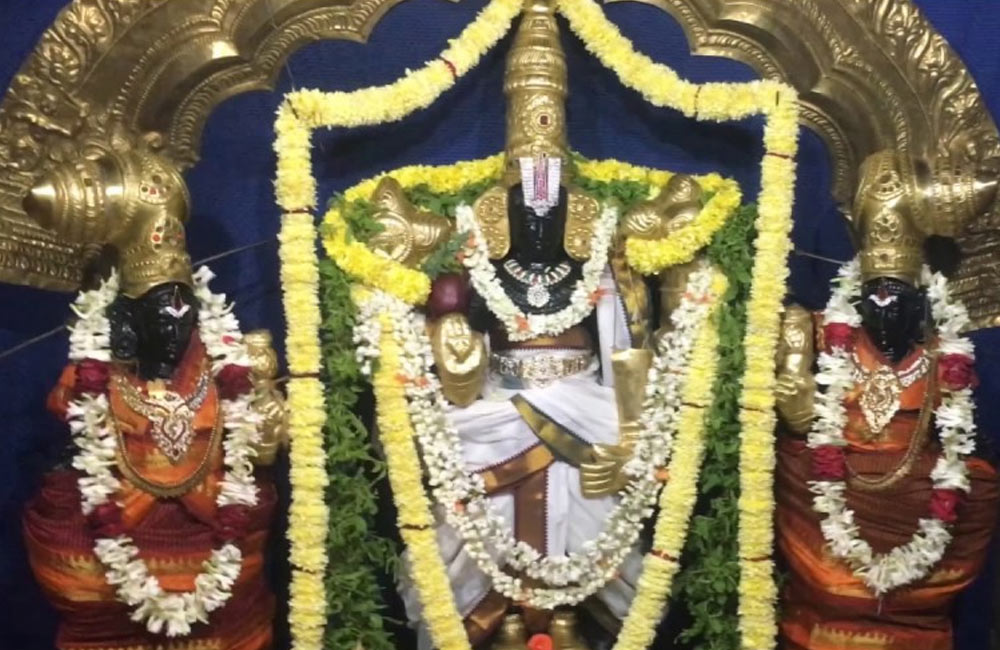 Chokkanathaswamy Temple | #1 of The Best Sacred Temples in Bangalore

Located near Kempegowda International Airport is Bangalore’s oldest temple, which was built by the Cholas in the 10th century, and reflects the grandeur of that era in its magnificent facade. You can always stop over at the temple on the way to your hotel in Bangalore from the airport. The temple pays homage to Lord Vishnu and depicts his Dashavtars, or ten incarnations, on its pillars. Lord Vishnu is also referred to as Chokka Perumal or Chokkanathaswamy at this temple. Inscriptions in Tamil adorn the walls, while the pillars are decorated with sculptures showing the local traditions and dance forms. The idols of Lord Vishnu in this temple have been carved out of the Saligram stone found in Nepal. People visiting this temple have often felt a surge of Pranic energy in their body, as they surrender themselves to God. Read also – Things to Do in Bangalore 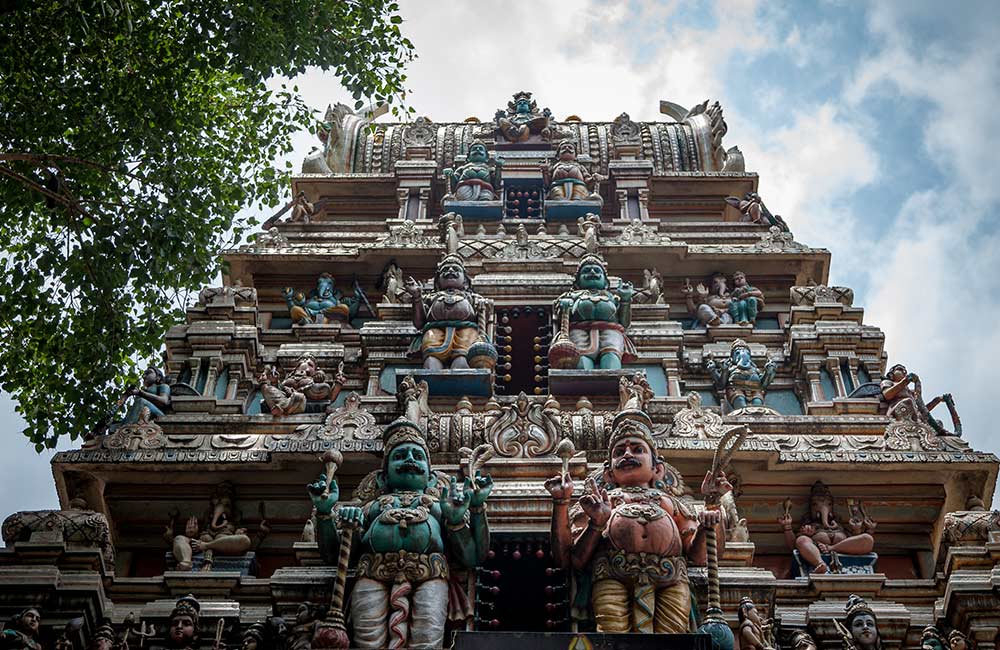 Dodda Ganesha Temple | #2 of The Best Sacred Temples in Bangalore

An 18-feet high monolithic statue of Lord Ganesha is what makes this temple one of the most popular Ganesh temples in Bangalore. The statue of Lord Ganesha in his Benne Alankara avatar is bathed in almost hundred kilos pure butter on several important religious occasions. Also known as Shakthi Ganapathi or the Satya Ganapathi temple by the locals, it sees hundreds of devotees at its doorstep every day. Kempegowda, the founder of Bangalore, made this temple and is believed to have stumbled upon a rock with an image of Lord Ganesha etched in it. He then asked the sculptors to replicate the same in the temple idols. 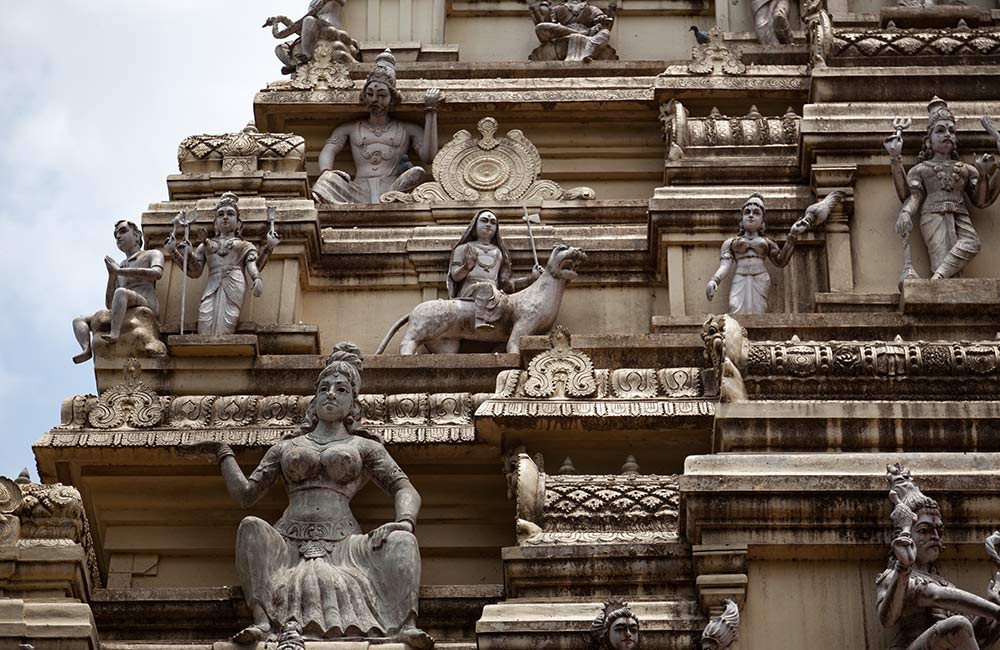 Dodda Basavana Gudi shares the campus with Dodda Ganesha Temple and is equally popular among the devotees. It was built in 1537 by the former ruler of Vijayanagara Dynasty. Holding the honor of being the biggest Nandi temple of the world, it has a majestic fifteen feet tall statue of Nandi, the bull, carved out of a single granite rock. The temple also pays homage to Lord Shiva along with his mount, the Demi-God Nandi. Right behind the Nandi statue are the statues of Lord Surya, the Sun God, and Lord Chandra, the Moon God. The temple hosts Kadalekaye Parishe festival on last Monday and Tuesday of the Hindu month Karthika, and is one of the best times to visit this place. This festival is also known as the groundnut fair as devotees offer groundnuts to Nandi. Musicians performing at the temple over weekends add to the divine aura of the place. 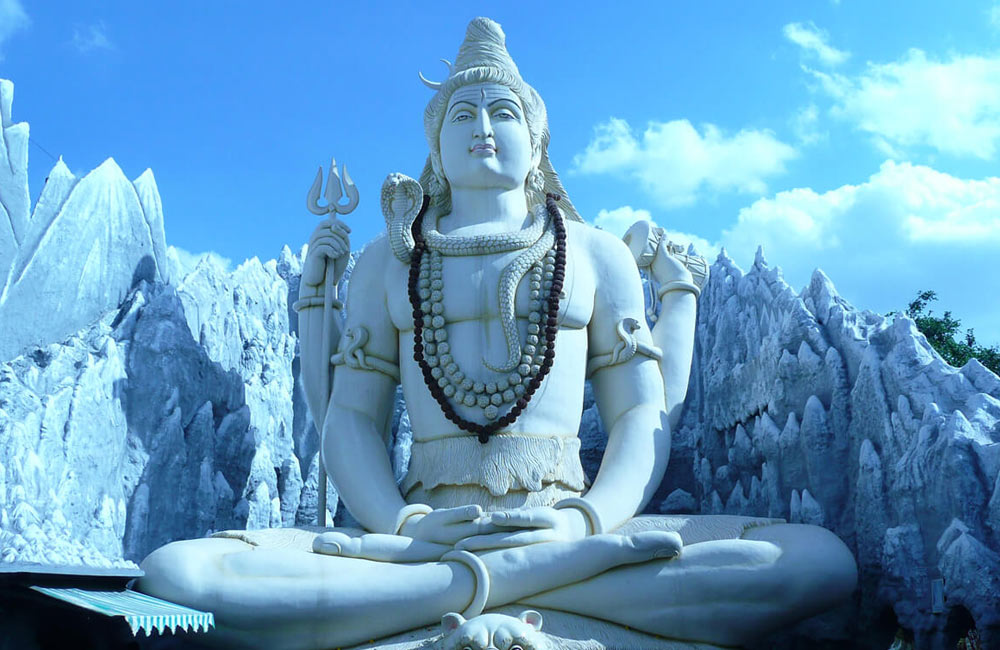 Shivoham Shiva Temple | #4 of The Best Sacred Temples in Bangalore

Shivoham Shiva Temple in Bangalore is a relatively new addition to the city. Constructed in 1995,  the elaborate architecture of this temple matches that of ancient temples in the city. Located on Airport Road, the temple with its 65-feet tall statue of Lord Shiva is your first encounter with the religious heritage of the city. The statue looms large against the backdrop of Mount Kailash and the sacred river Ganges, which is said to be the abode of Lord Shiva. As many as four lakh devotees come to the temple on the festive occasions of Maha Shivratri and Ganesha Chaturthi. A thirty-two feet tall idol of Lord Ganesha is present in the premises. People visit the temple during the ritual hours when the sacred 25-feet Shiva Linga is bathed in milk by the priests. Monday, which is considered to be an auspicious day to pray to Lord Shiva, also sees a heavy footfall in the temple with devotees spellbound to Shiva Aartis. 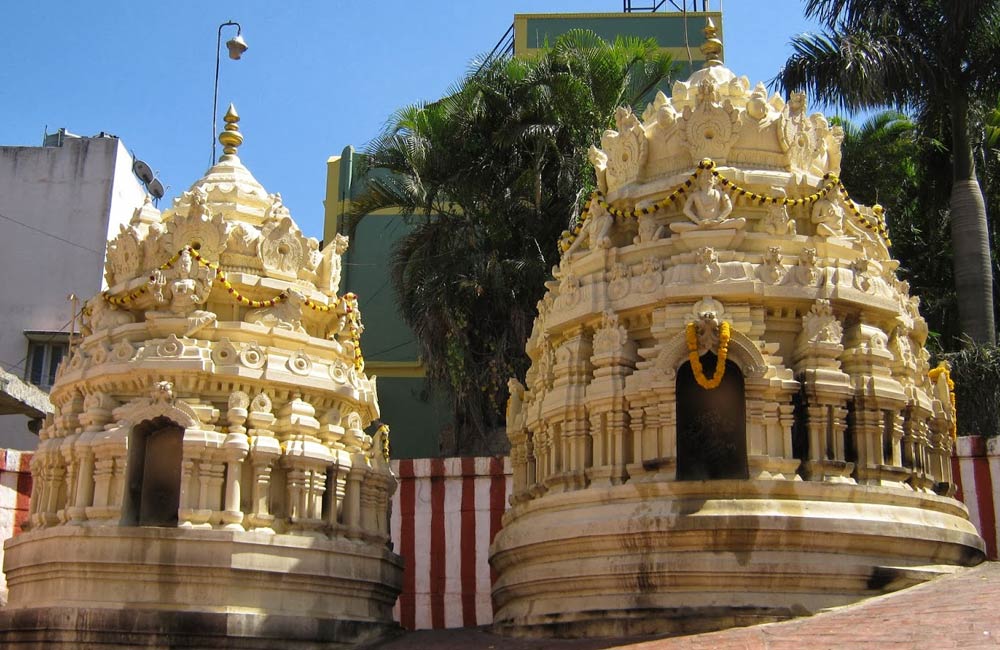 Gavi Gangadhareshwara Temple | #5 of The Best Sacred Temples in Bangalore

Gavi Gangadhareshwara Temple is another Shiva temple in Bangalore, built by the founder of Bangalore. What makes this temple unique is the fact that it is a rock-cut cave temple dating back to the 9th century. This temple is not only a place of worship but also holds importance in the history of the city. The stone discs present in the compound are major highlights of this temple. Also present are rarely found sculptures of Lord Agni, the Fire God, sporting two heads and three legs, which add to the uniqueness of this temple. Since the temple is devoted to Lord Shiva, the festival of Maha Shivratri sees a huge crowd visiting to receive blessings. Historians believe that this rock cave temple was carved out of a single rock, which adds to its magnificence reflecting in its elaborate architecture. On Makar Sankranti, a fascinating phenomenon occurs at the temple, when the rays of the sun fall directly on the Shiva Linga, bathing it in heavenly glory. It is a must-capture sight and hordes of people flock to the temple on that day to witness it. Read also – Bangalore Palace 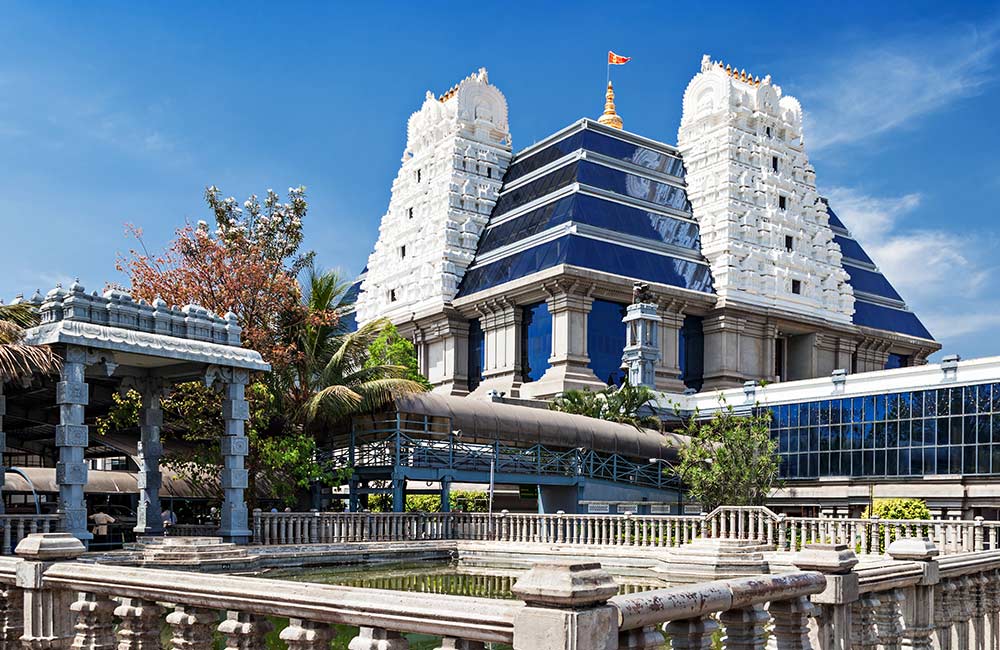 ISKCON Temple | #6 of The Best Sacred Temples in Bangalore

This popular temple in Bangalore is preferred as one of the temples for marriage in Bangalore, because of the charm and character it exudes. The idols of Radha and Lord Krishna grace this temple with their ethereal beauty, which is enhanced at night when the moonlight falls on it. Along with the idols of Sri Sri Radha Krishnachandra, the temple is also the sanctum sanctorum for Sri Nitai Gauranga, Sri Prahlada Narasimha, Sri Krishna Balarama, and Sri Srinivasa Govinda deities. Constructed in 1997, this Vaishnav temple is one of the favorites of Lord Krishna Bhakts or devotees. The grace of the temple can be witnessed in the water fountains and an ornate arch at the entrance, with dense green tree foliage flanking the temple on the sides. Five prayer halls have been made inside the temple for organizing lessons on the life and teachings of Lord Krishna, along with sermons on The Bhagwad Gita. There is also a theatre for showing Vedic films, an exhibition hall and a Vedic Museum at the temple.

This temple was built in 1997 to commemorate the birth anniversary of Shri Prabhupada, the founder of ISKCON, and holds the honour of being the largest ISKCON Temple in the world. Glass and gopuram style of architecture has been perfectly blended in a neo-classical style to accommodate the modern taste along with keeping the traditional style intact. The four gopurams are all connected to a canopy made out of glass that serves as a passage for sunlight. A gold-plated 17-meter tall flag post and an 8.5-meter high Kalash Shikhara will keep you transfixed. Banashankari Temple | #7 of The Best Sacred Temples in Bangalore

This 19th century temple of Bangalore is devoted to Banashankari Amma, who is prayed to by the devotees in the Rahu Kala, a time frame during the day that is considered inauspicious by most Indians. It is a belief among the devotees that worshipping Banashankari Amma during this hour will eradicate all the hurdles of their lives. Most people visit the place on Tuesdays, Fridays, and Sundays, along with the few special occasions – including Dusherra, when the temple celebrates its anniversary, and on the feast day of Goddess Banashankari Amma, which is observed every year on the 13th of September. 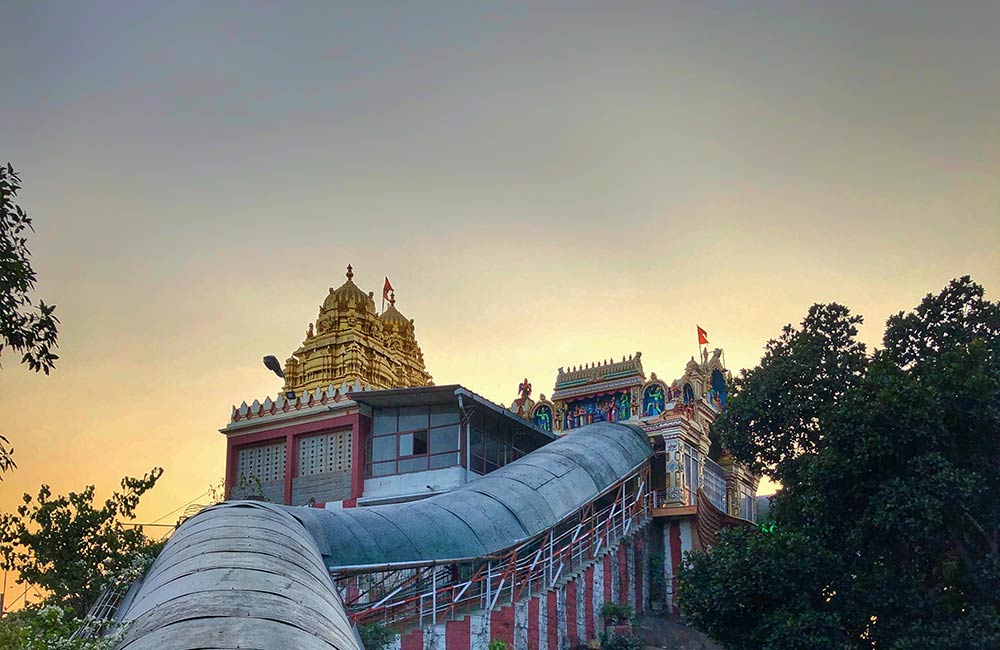 Ragigudda Anjaneya Temple | #8 of The Best Sacred Temples in Bangalore

Dedicated to Hindu God Hanuman, Ragigudda Anjaneya Temple stands tall on a quaint hillock in the suburbs of Bangalore. The construction of this shrine dates back to the year 1969 when a group of dedicated youth laid foundation of a small Hanuman temple. Today, this temple complex is spread over an area of 5 acres and houses a huge idol of the Monkey God. There is also a Shivalinga along with idols of Rama, Lakshmana and Sita in the same precinct. At the foot of the shrine are smaller temples of Ganesha, Navagrahas and Rajarajeshwari. Within its premises, there is also a beauteous water tank ‘Pushkarni’, a Prasad division, an auditorium, an amphitheatre and an artificially-created waterfall. The views of the city from atop the hills where the temple stands are truly enchanting.

Just as the connection between the mortals and the Gods is boundless, so is the list of temples in Bangalore. Other famous names include Venkataramanswamy Temple in Basavanagudi, Sugreeva Venkateshwara Temple in Balepet, The Kanyakaparameshwari Temple in Kumara Park, Chennakeshava Temple on Avenue Road, Panchamukhi Ganesha Temple in Hanumantha Nagar, and the Halasuru Someshwara Temple in the Cantonment Area.