Top 10 Places to Visit in Patna

Patna or Pataliputra has a long and storied past; ruled by mighty kingdoms at different times in history, coveted for its fertile lands (the city lies on the south bank of the iconic Ganges) and revered for its learning centers like Nalanda. Today it leads the pack as one of the fastest growing cities in India.

One of the oldest continuously inhabited places on the planet, Patna was once a thriving center of international and agricultural trade. It was home to many scholars of ancient India – think Aryabhatta, Chanakya and Panini. The city was also the capital of the mighty Magadha Empire and at the epicenter of two of the largest religions in India – Buddhism and Jainism – and an important destination for Sikhism, another major religion in the country.

For a city that has been around for at least 2500 years, it is nearly impossible to not have places of interest you could explore. Patna is a city teeming with interesting stories, intriguing structures and an unfailing sense of hospitality that you are greeted with when you visit it.

If you thought Patna was only famous for making political news, you’re in for a surprise. So, shake off that sense of disbelief, book a Hotels in Patna, and explore these places on your next visit: 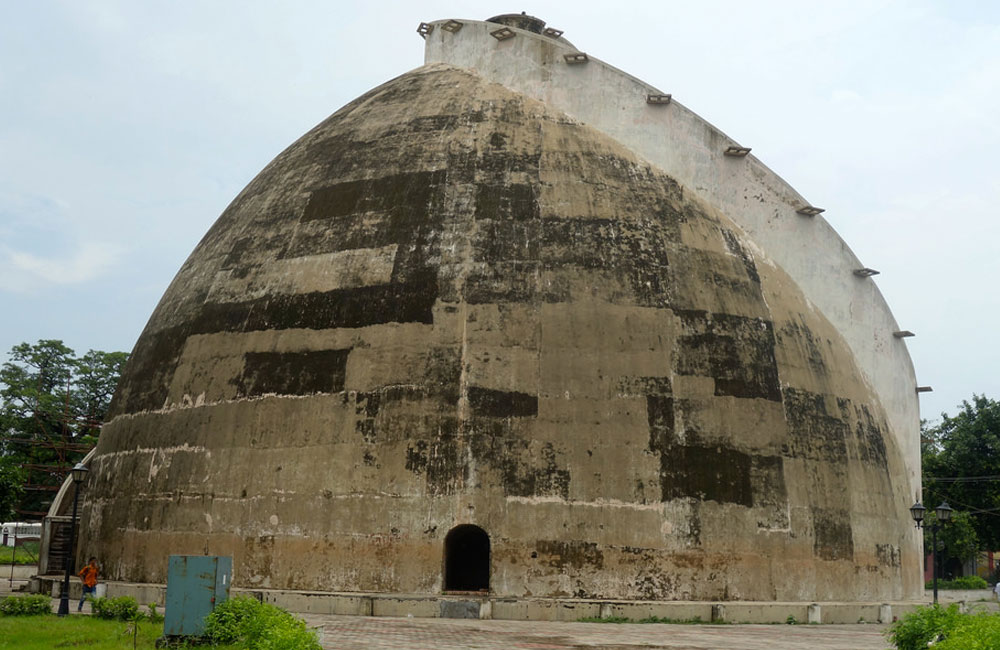 Golghar | Among The Best Historical Places to visit in Patna

This arresting beehive-shaped structure is undoubtedly the city’s most iconic landmark, dominating the list of things to explore in Patna. A unique, whitewashed dome with a spiraled staircase, Golghar was built by Captain John Garstin in 1786 as a granary for the British army garrisoned in the city. The most amazing thing to note about this structure is that the huge dome, 29 m in height and 125 m in diameter, is not supported by any pillars!

Golghar was meant to be the first in a series of similar structures intended to act as a preventive measure against frequent famines in the area.  None of the other ‘golghars’ were ultimately built, giving us a one-of-a-kind building that you must-visit in Patna. 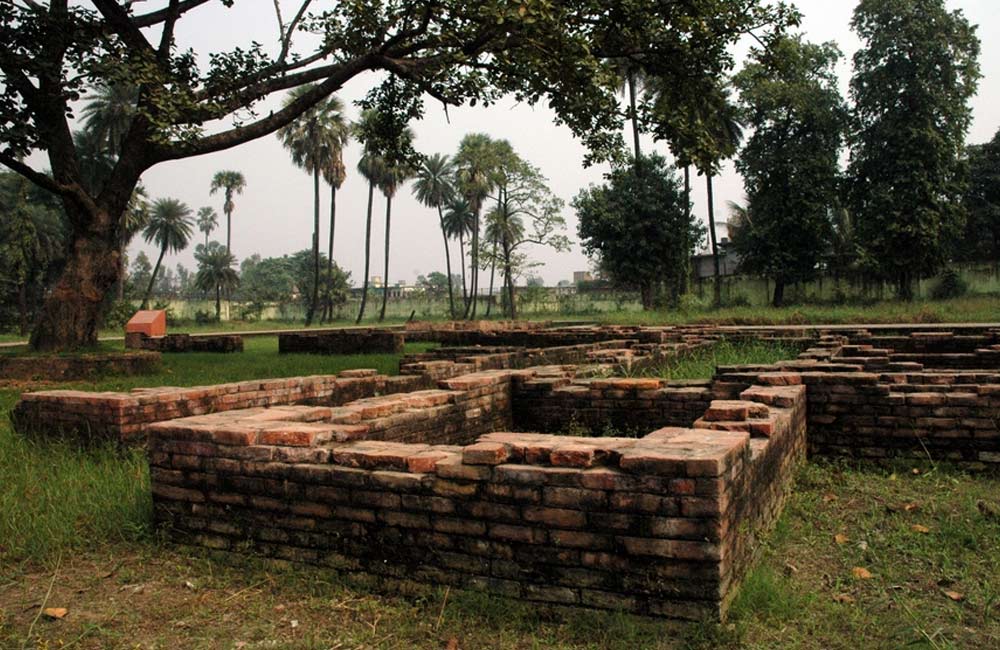 Lying just a little distance away from the current city of Patna are the ruins of its predecessor – Pataliputra. The city that was ruled by 3 legendary kings – Ajatshatru, Chandragupta and Ashoka – is today just a pile of rubble, sandstone pillars, wood platforms that may have supported a staircase, foundation bricks of a Buddhist monastery and carved stone pieces. But don’t let this description dissuade you from visiting the ruins (better known locally as Kumhrar) of what was once the center of power, trade, arts and learning in ancient India.  You’ll be in good company as this is one of the most popular tourist places in Bihar, attracting visitors from around the globe.

Excavated at different points in time, the ruins require you to use your imagination to see what a grand city it once was. The scale of the structures, the possibilities of their uses and just the pride in our glorious past makes this a place worth exploring while you are in Patna. 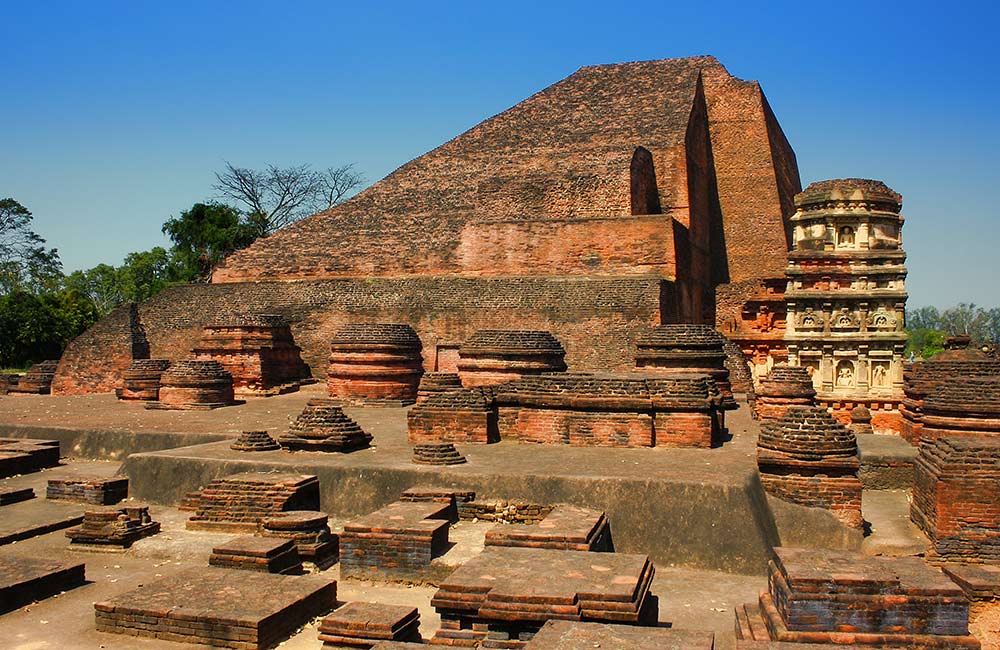 Nalanda Mahavihara | Among The Best Historical Places to visit in Patna

A revered seat of learning in ancient India, Nalanda was one of the earliest universities in the country and home to students from India, Tibet, China, Korea and Central Asia. Eminent Chinese scholar and traveler Hsuan-tsang visited the university between 685 and 762 AD and studied Buddhist theology, the Vedas, logic, and metaphysics.  Amply patronized by the kings of the Gupta Empire, Nalanda flourished from 5th century AD to 1200 AD. One of the most important centers of learning, Nalanda is believed to have three huge libraries – so huge, they burnt for six months when the marauding armies of Islamist invaders attacked the monastery in 1193.

About 95 km from Patna, this glorious scholastic and monastic institution today tells its stories through its ruins of stupas, shrines and viharas. A UNESCO World Heritage Site, the attraction also features a fascinating archeological museum next to the ruins. Displays include the Nalanda University seal, bronze and stone sculptures. Also visit the Xuan Zang Memorial Hall, built by the Chinese in honor of the famous traveler, while you are here. Spend a day at this peaceful point of interest and revel in the wonderful history of the city. 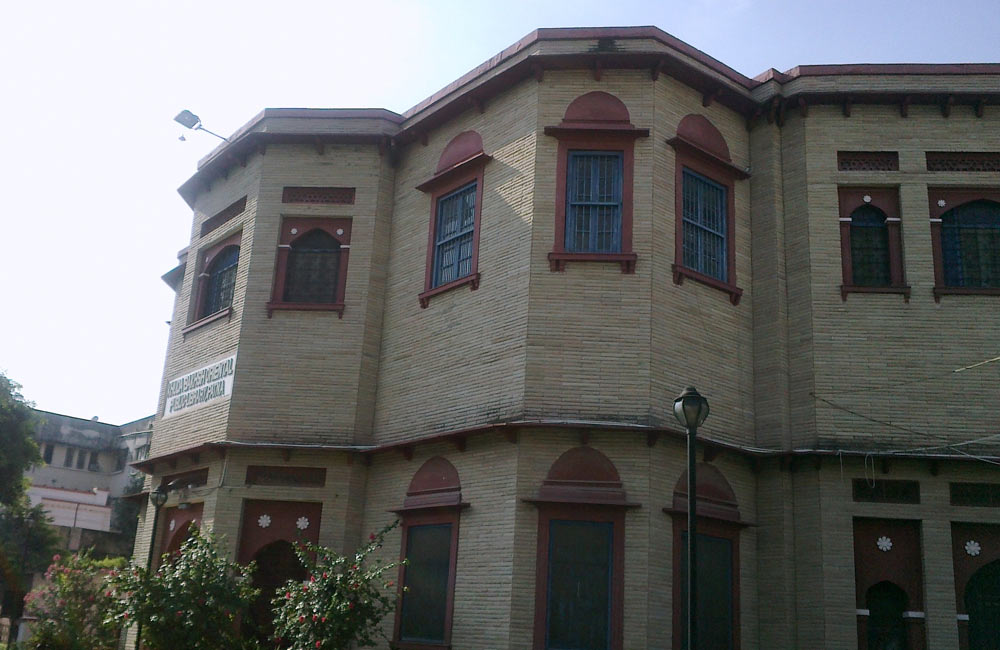 A book of the military accounts of Maharaja Ranjit Singh, Timur Nama, Jehangir Nama; books on Persian poetry, Sufism, and even ancient medical texts – you can find all this and a mindboggling lot more at the Khuda Bakhsh Public Library in Patna. A surprise find for many, this is one of the few national libraries of India and houses may rare hand-illustrated manuscripts, printed volumes and exquisite paintings from the Rajput and Mughal eras.

The two-storied building that houses the library was completed in 1888 using a princely sum of ₹80,000 and was opened up to the public in 1891. A bibliophile’s Eden, this should definitely be on your list of places to explore while in Patna. 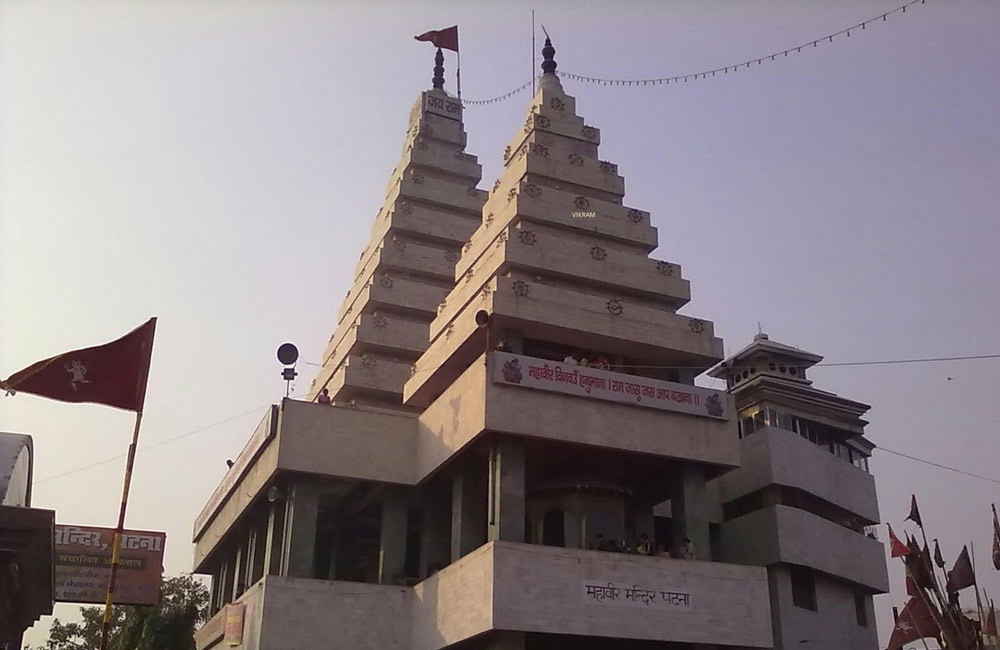 Mahavir Mandir | Among Best Religious Places to visit in Patna

One of the largest temples dedicated to Lord Hanuman, Patna’s Mahavir Temple is a tranquil oasis in a crowded urban jungle. Most likely built in the 17th century, the temple started gaining popularity after India’s partition in 1947 when a large number of Hindu refugees from the newly-created Pakistan started settling down in the city. Besides the beautiful idol of Lord Hanuman, the temple is also home to a ‘floating stone’ from the legendary Ram Setu. 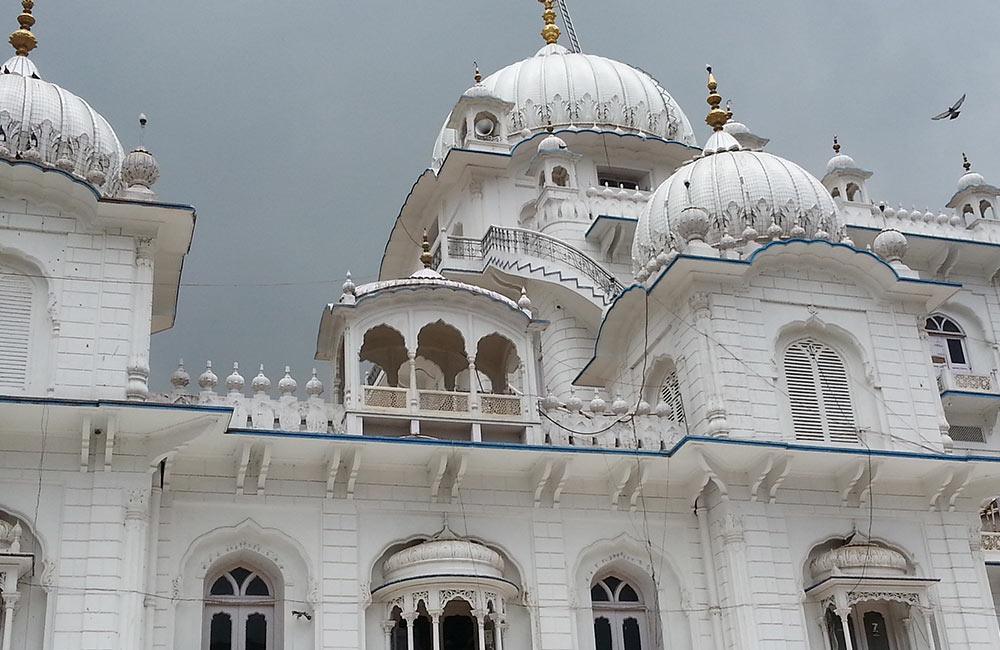 Patna is revered by the followers of the Sikh religion as this is the place where the 10th Sikh Guru, Guru Gobind Singhji was born. Takht Sri Patna Sahib was built by Maharaja Ranjit Singh to commemorate the event. Also known as Harmandir Sahib, the holy shrine is built in the old quarters of Patna city in an area known as Kucha Farrukh Khan and is thronged with devotees from all over the globe. Visit it for a glimpse into Sikh history. Relics of the 10th Guru like four iron arrows, weapons, a pair of his sandals and a cradle with gold-plated stands are housed in the shrine. 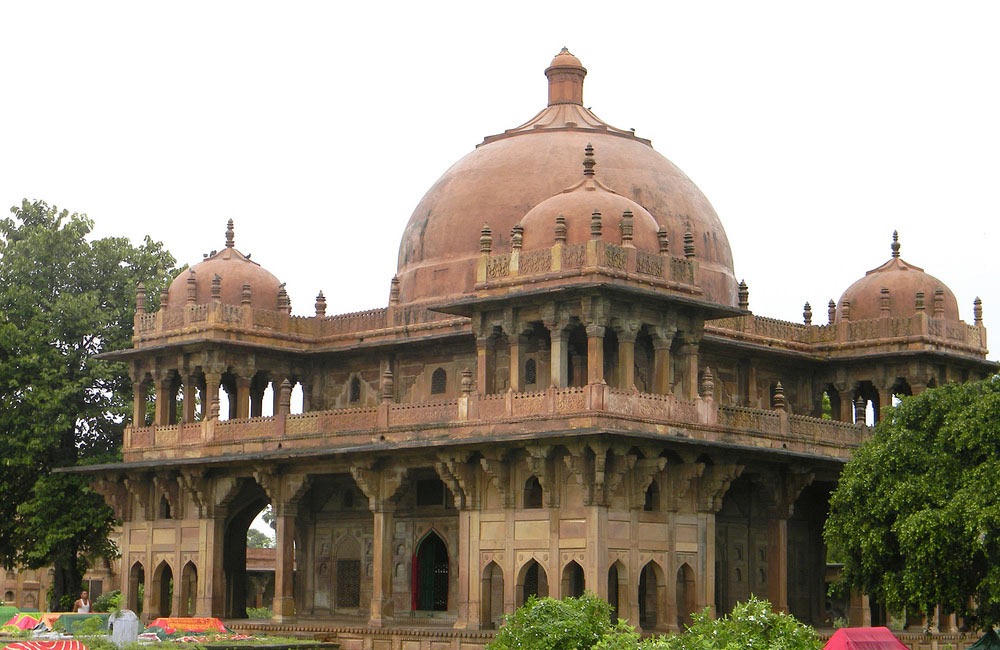 Choti Dargah | Among The Best Religious Places to visit in Patna

Just 32 km west of Patna lies one of the finest and least known Mughal structures in India – the Choti Dargah of Maner. A magnificent three-storied structure, the mausoleum was erected in 1616 in honor of the Sufi saint Makhdoom Shah Daulat who passed away in Maner and was buried here. Its beautiful dome flanked by four twelve-sided minarets, age-old walls adorned with exquisite motifs and ceilings inscribed with passages from the Quran make for memorable viewing. 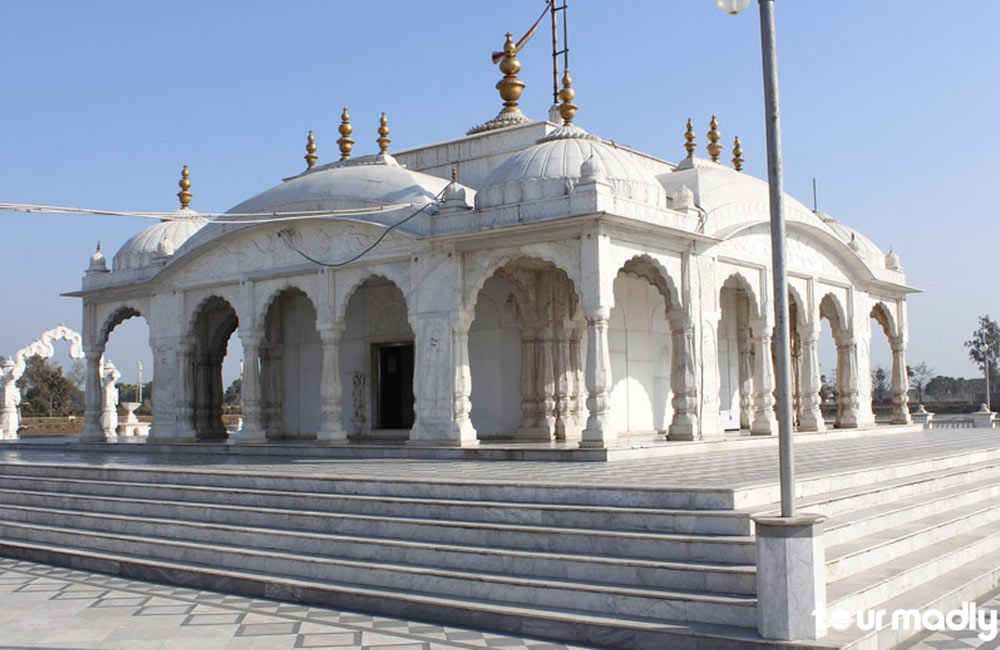 Pawapuri is one of the holiest sites for the followers of Jainism in India. Located about 93 km from Patna, near Rajgir, this is the place where Mahavira, the 24th Tirthankara of Jainism is believed to have attained nirvana or liberation. Jain pilgrims throng the city to visit the beautiful marble temple dedicated to Lord Mahavira and believe they will be absolved of all their sins here. Visit it for its peaceful ambience, beautiful Jain architecture and a chance to shake off all your sins, possibly! 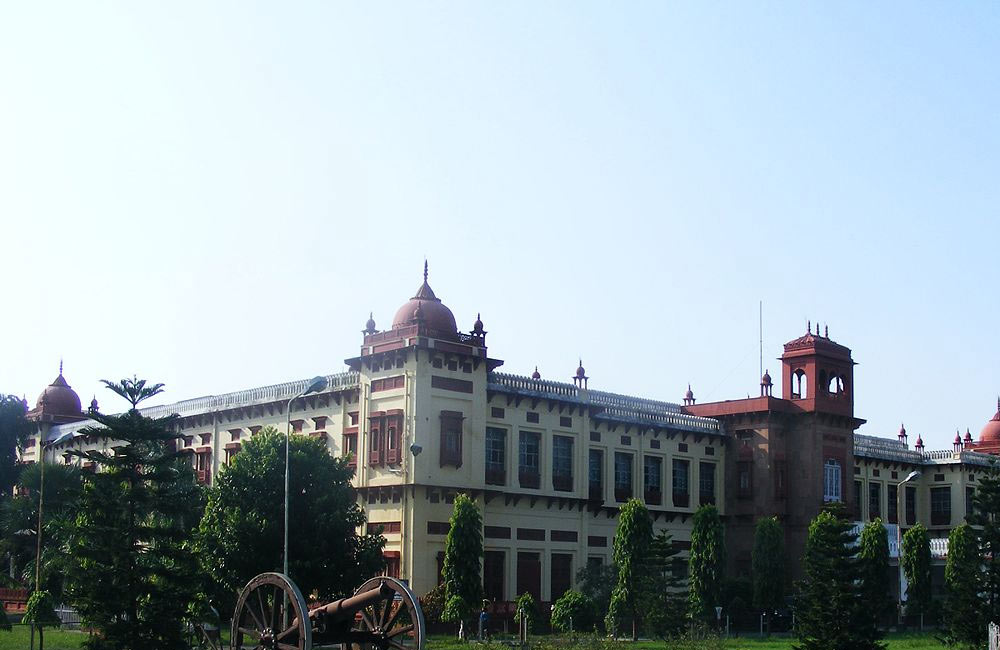 Patna Museum | Among The Best Museums in Patna

A grand building constructed in 1917 especially for the museum founded by Sir Edward Gait, the then Lieutenant Governor of Bihar; the structure that houses the Patna Museum is a site in itself. Created as a place to display historical and archeological finds of note discovered in and around the city, today it displays over 20,000 exhibits. While here, focus on the fossil of a 200-million-year-old tree classified as a Dadoxylon, the Buddha Relic Casket – a soapstone casket said to contain the ashes of Mahatma Buddha, the 2300-year-old Didarganj Yakshi, an ancient sculpture, and museum’s various galleries like the Natural History Gallery, which would be endlessly amazing if you’re traveling with kids. 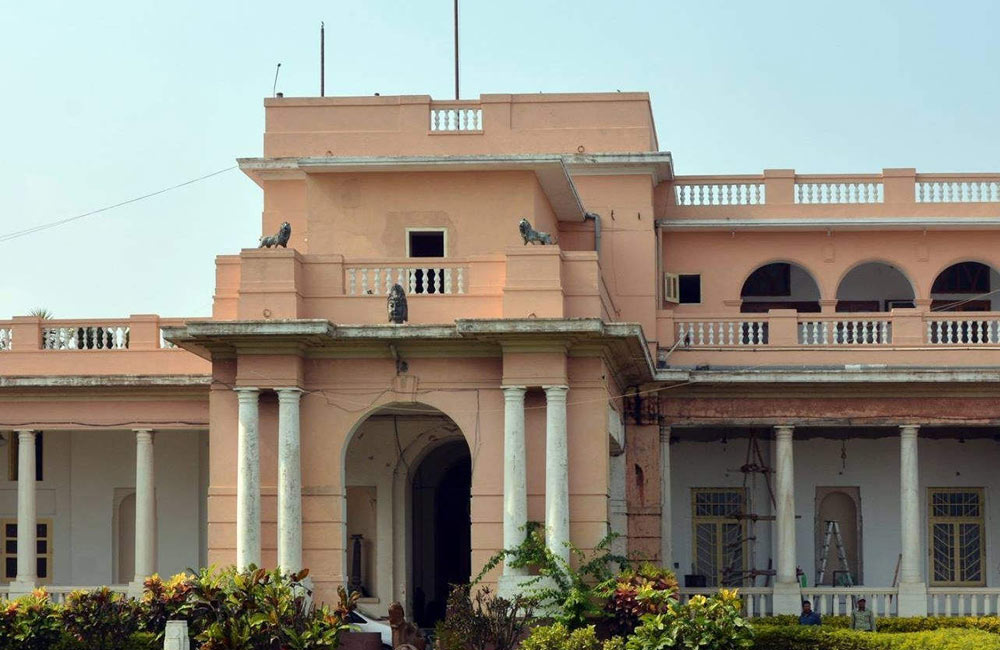 Jalan Museum | Among The Best Museums in Patna

Would you believe us if we told you that Napoleon’s bed (yes, THAT Napoleon) is lying in a museum in Patna? That, along with Chinese jade and porcelain pieces from the Han and Ching dynasties, a silver dinner set that includes a thali, believed to have been owned by Emperor Akbar’s prime minister, Birbal, Tipu Sultan’s ivory palanquin and a cabinet made for King Henry II of France…all these and more delightful finds are housed in the eclectic private collection of RK Jalan, a noted businessman from Patna who collected artefacts and antiques over his lifetime. Displayed at the family’s private residence (this is not actually a museum!) called Quila House, the collection spanning continents and centuries is an absolute must-visit attraction in the city.  Do make an appointment at least 48 hours in advance, with the family, before you go.

The city offers many other places of interest you could explore. The Bihar Museum with its large number of intriguing artefacts focused on the state’s history, the Buddha Smriti Park with its giant Stupa and tranquil Garden of Memories, the Sanjay Gandhi Jaivik Udyan which is equal parts a botanical garden, a zoo and one of the most popular picnic spots in the city, and the immensely calming Gandhi Ghat on the gently flowing Ganga.

Not everyone thinks of Patna as a tourist destination. But if you’re willing to let out that adventurous explorer in you, the city has many gems waiting to be discovered. Tell us about your favorite attractions in Patna in the comments below.

Q: List some good places to visit in Patna at night.

Q: Is there an airport in Patna?

A: Yes, Patna is served by Jay Prakash Narayan Airport which services flights to and from major Indian cities including Bangalore, Delhi, Hyderabad, Kolkata, Mumbai, Ahmedabad and Chennai.

Q: Which are the most popular shopping places in Patna?

A: Patna Market, Khaitan Market, Hathwa Market and Maurya Lok are the best places to visit in Patna for shopping. You can also explore shopping malls in Patna like Vasundhara Metro Mall, PM Mall, Patna Central and Patna One Mall.

Q: Are there any exciting weekend getaways from Patna?

A: If you wish to make one-day trips from Patna, explore Vaishali, Rajgir, Gaya, Lakhisarai and Madhubani. You can even plan a weekend trip from Patna to Kathmandu in Nepal, which is merely 350 km away.