Incredible Waterfalls near Mysore you must Visit

The gushing water rippling over boulders, the pristine white surf shimmering in the sun and lush greenery…that’s the perfect waterfall and a perfect way to spend a day. Rejuvenating, relaxing and just so much fun to splash around in nature’s bounty. Sure, a vacation usually conjures up images of beaches or verdant mountains, but try spending a day at a waterfall for an equally memorable time.

India is blessed with a diverse geography and just about every region save the desert has waterfalls, some perennial, some that only appear during the monsoons. Mysore too has many waterfalls nearby you could spend a day at on your next visit.

So pack your bags, book a hotel in Mysore and head to these incredible waterfalls near Mysore for the most refreshing vacation ever! 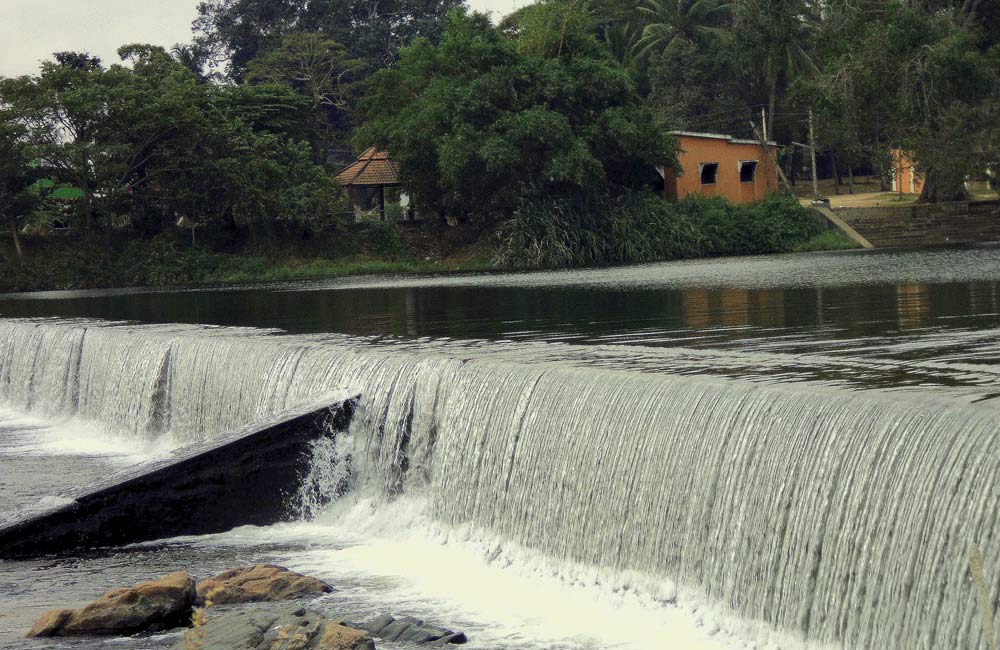 The Balmuri Falls Mysore is actually not a waterfall. Well, not a natural one, anyway! It has come into existence because of a check dam built across the mighty Kaveri (also spelt Cauvery). When the dam’s water overflows, it creates the picturesque cascade that you could spend hours around. The fall derives its name from two Kannada words – Bala (which means ‘right’) and Muri (which means curve) and the river does take a right turn at this point. And, so would you if you put this incredible waterfall on your checklist too!

Also Read: Things to Do in Mysore

Chunchanakatte Falls (#2 of 11 Waterfalls near Mysore) 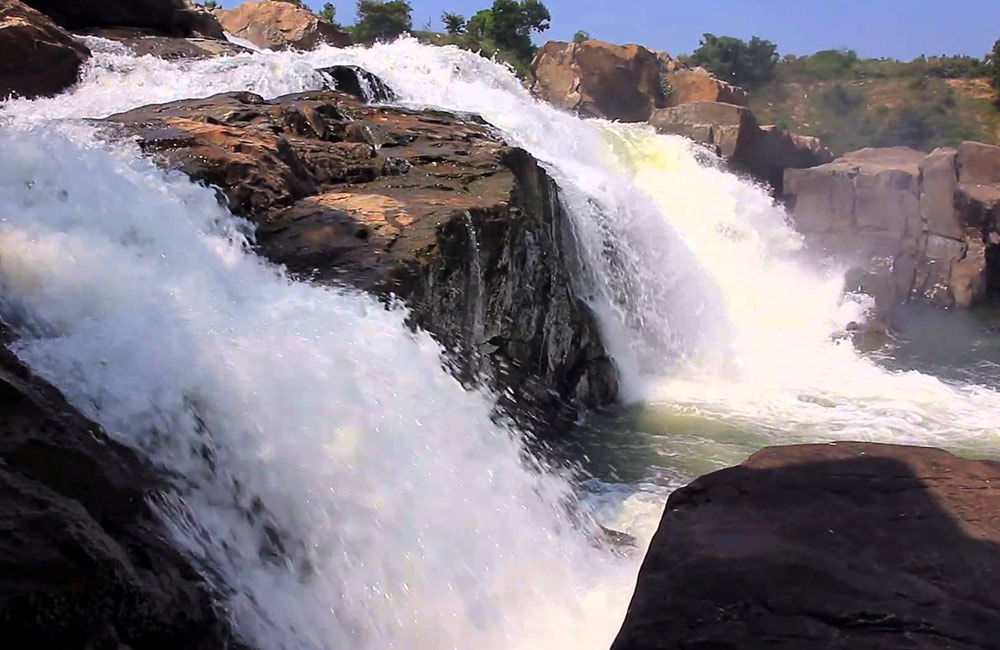 Legend has it that during their exile, Lord Rama, Laxmana and Sita stopped at a scenic mountain in the forest (in present-day Mysore) at the request of the local tribal couple Chuncha and Chunchi. Goddess Sita wanted to take a bath and there was no water available. Lord Rama commanded his brother, Laxmana, to provide water. Laxmana, with his mighty bow and arrow, pierced the mountain to create the Chunchanakatte Falls, and Goddess Sita was able to have her bath. Legend also states that to date the water in the area looks like it is mixed with turmeric and other holy elements Goddess Sita used in her pooja. One of the most picturesque waterfalls near Mysore, Chunchanakatte is formed by the Cauvery River and is one of the most popular tourist places near Mysore within 150 km. Surrounded by lush forests, the waterfall is huge at about 350 feet wide and 60 feet tall. An ancient temple dedicated to Lord Kodanda Rama sits right next to it, attesting to the story of its legend.

Shivanasamudra Falls (#3 of 11 Waterfalls near Mysore) 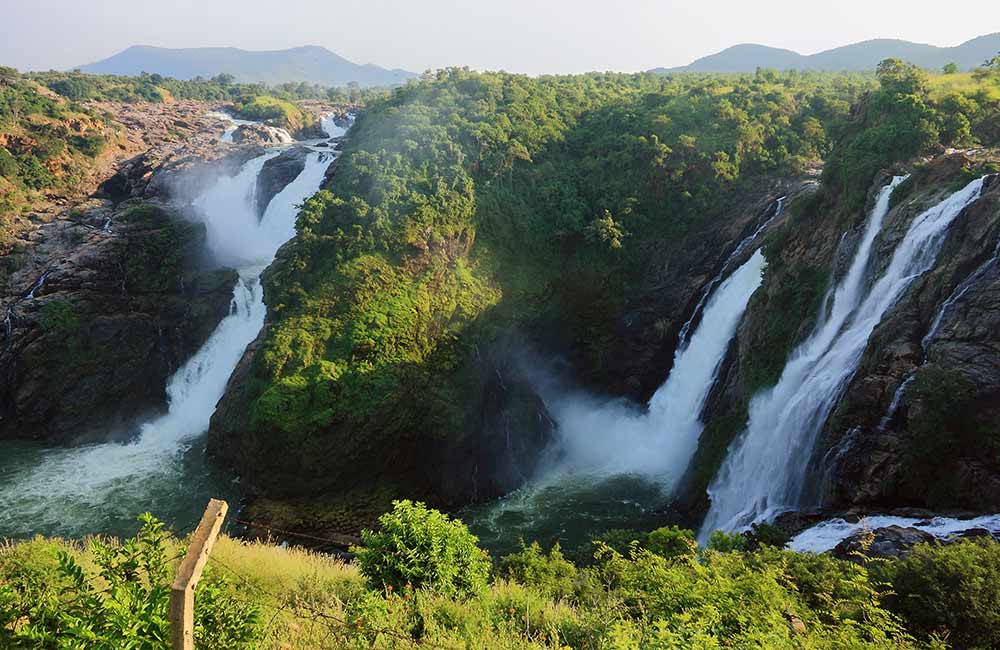 A spectacular set of twin falls, Shivanasamudra is one of the most visited places near Mysore. Formed by a meandering Cauvery, slicing its way across the Deccan Plateau, plunging down 90 meters in two streams, this is a fantastical natural wonder that takes your breath away. The twin falls are known as Barachukki and Gaganachukki, and these create beautiful streams cascading down through a rock at a height of about 320 feet – some spectacle, right? Great for visiting during the monsoon season, the falls should be on your list for your next trip to Mysore.

Chunchi Falls (#4 of 11 Waterfalls near Mysore) 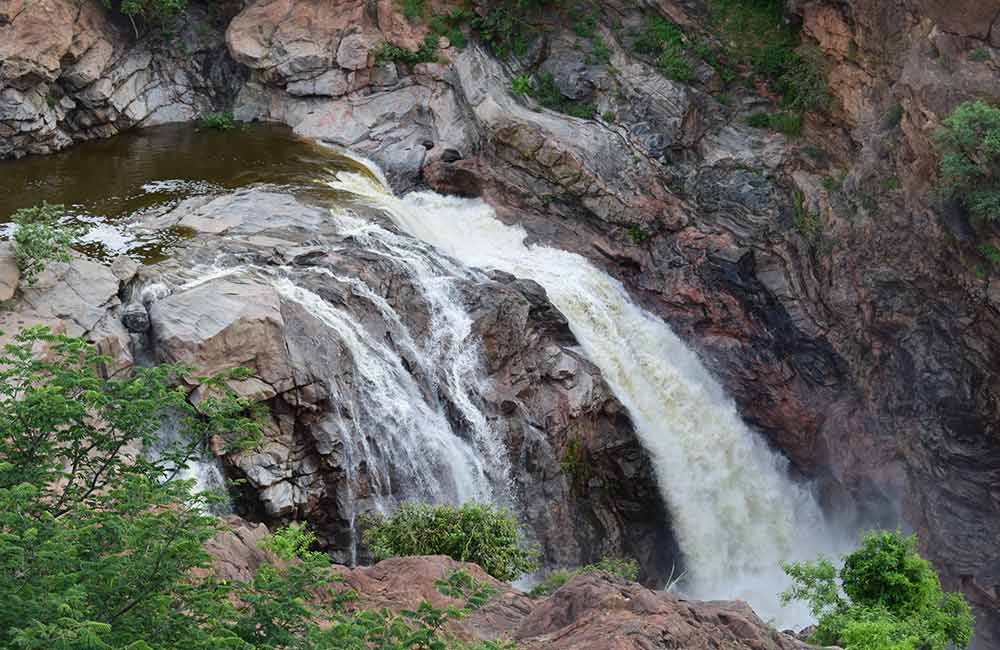 Just like Chunchanakatte Falls, Chunchi Falls is also associated with the Ramayana; the area around it is claimed to be yet another place where the exiled couple stayed a while. Fed by the Akravati River, it is a spot enveloped in greenery and tranquillity. Its plunge pool is perfect for little dips and swims in the sweltering summer heat. But, come here in the rainy season to see the falls raging with all their might; don’t go swimming though.

Iruppu Falls (#5 of 11 Waterfalls near Mysore) 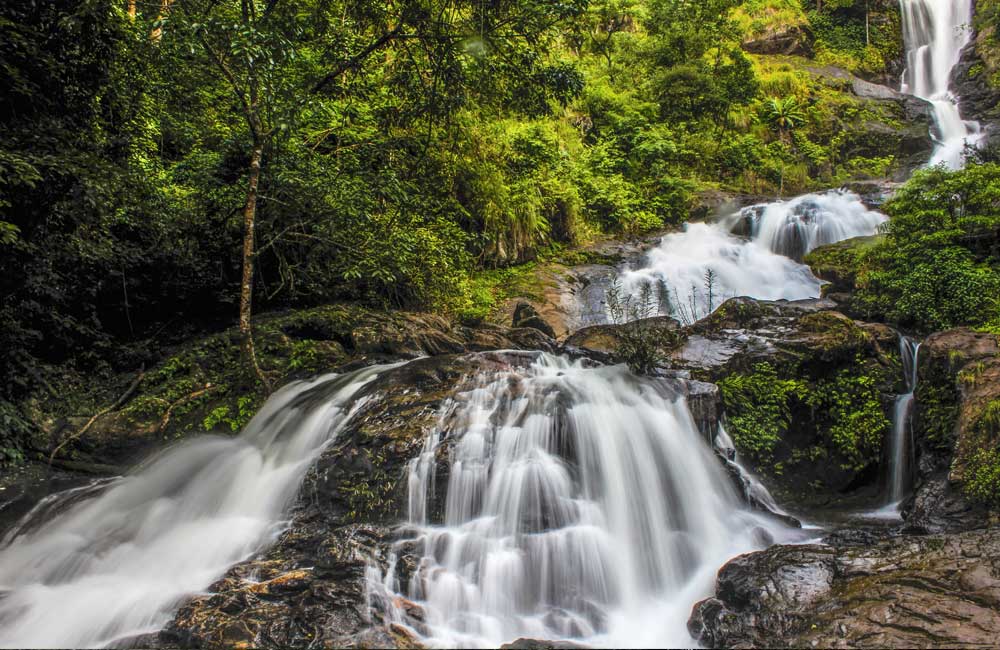 Nestled in the scenic Brahmagiri range in the Kodagu district, Iruppu Falls also have a legend attached to them, similar to Chunchankatte Falls. During their exile, Lord Rama felt thirsty and asked his devoted brother Laxmana to bring him some water. Laxmana shot an arrow through the mountain to divert the course of a small stream in the Brahmagiri. The result was the Iruppu Falls, also known locally as Lakshman Tirtha Falls. Cascading down 170 meters, the roaring waters of the falls are a sight to behold in the verdant Western Ghats. Unlike many other falls in the area, you are allowed to go near the actual falls and that is an unforgettable experience. Plus, there are changing rooms available! So don’t forget to take a spare set of clothes.

You could also trek to the Brahmagiri mountain peak (with the permission of the forest department, of course) and visit the Rameshwara Temple dedicated to Lord Shiva that is nearby. With so many things to do, it is worth a day’s trip to Iruppu, isn’t it?

Abbey Falls (#6 of 11 Waterfalls near Mysore) 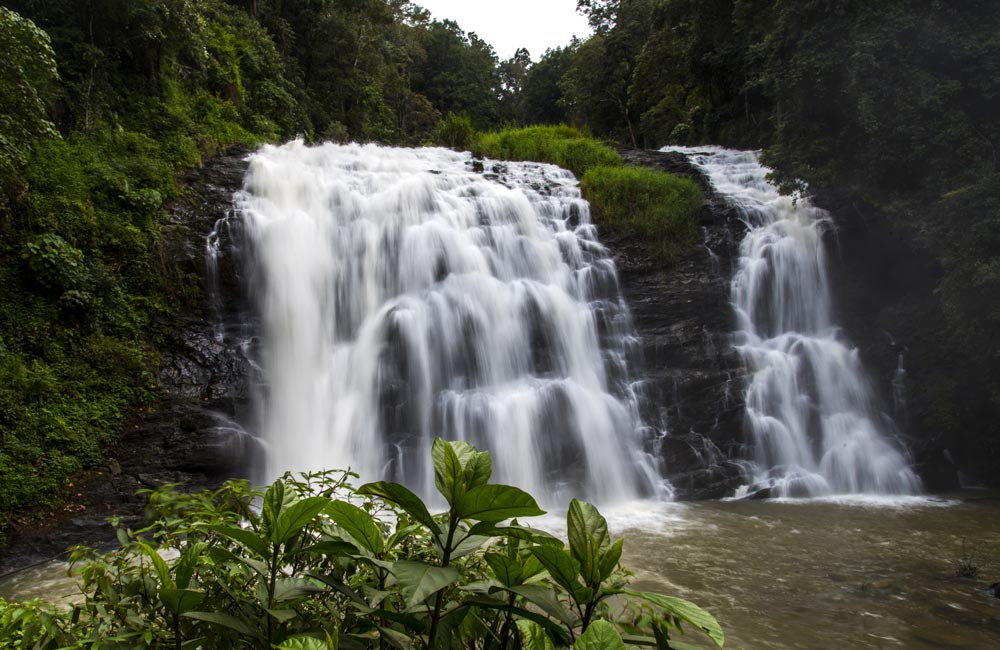 One of the most visited waterfalls in Karnataka, the Abbey Falls lie in the Coorg district. Nestled amidst lush green nature, Abbey Falls is actually in the middle of a private coffee plantation. Located quite upstream in the Cauvery, the water here falls from a height of 70 feet to form a beautiful pool and then continues onward to reunite with its parent river. You can view the falls from a hanging bridge constructed specially for the purpose. A great place to relax, take a few pictures for memory and spend a day with family and friends, Abbey Falls should definitely be on your list of tourist places near Mysore within 150 km.

Chelavara Falls (#7 of 11 Waterfalls near Mysore) 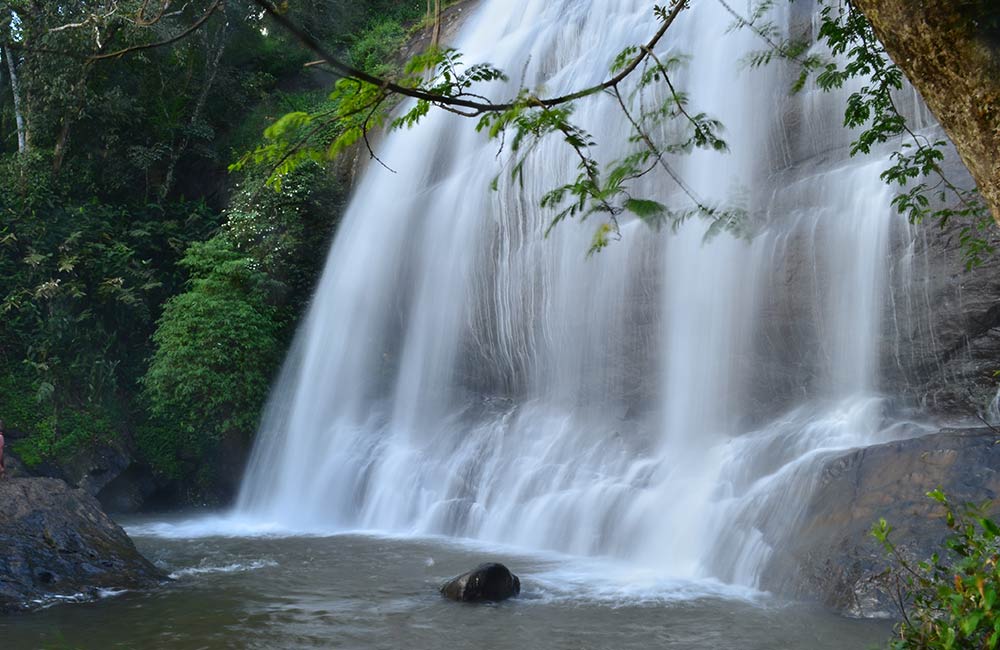 A natural waterfall formed by a small tributary of the Cauvery River, Chelavara Falls are located near the Cheyandane village. One of the most scenic places near Mysore, these falls are spectacular (also a little dangerous, so no swimming!), voluminous and perfect for a day’s getaway with friends or family or that special someone. Pay attention to the rock, over which the waters come cascading down – it looks like a tortoise, earning the falls the local name of Embepare or tortoise. There are several other tourist spots in the vicinity, like Chomakund Hill, but we can bet the beauty of this fall will not let you go easily!

Mallalli Falls (#8 of 10 Waterfalls near Mysore) 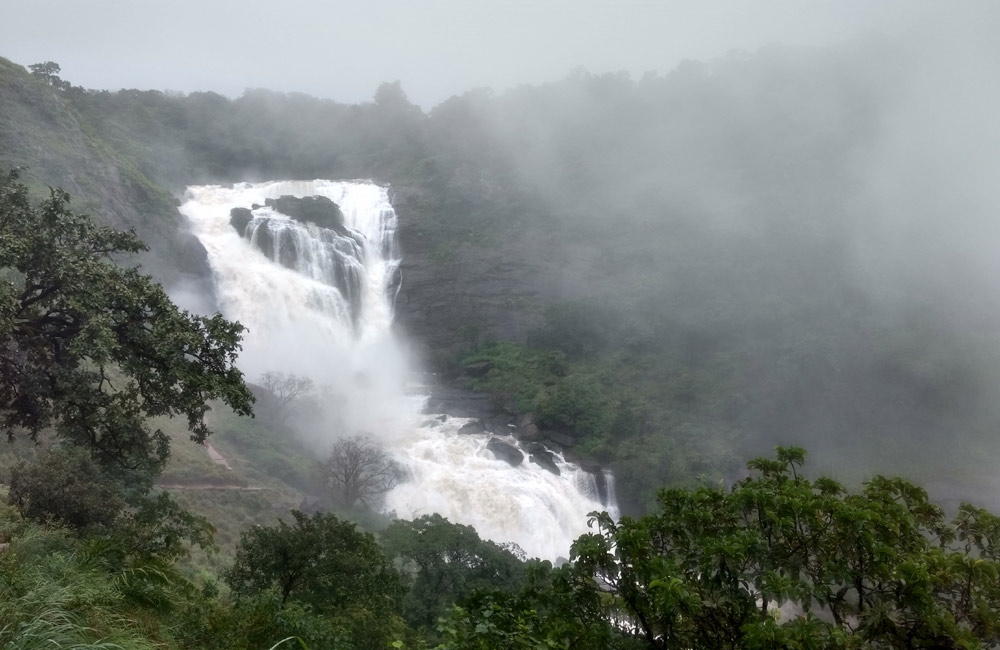 Karnataka is blessed with many rivers carving their way through the rocky Deccan Plateau. And, most of them create one of nature’s most beautiful vignettes – waterfalls. Mallalli Falls created by the Kumaradhara River is one such beauty that you must visit on your next trip to Mysore. Set in a valley amidst lush mountains, Mallalli Falls are spectacular, even more so in the monsoons. The journey to the falls is a little arduous because after the asphalt road ends, you need to trek the last mile on foot. But, believe us when we say the first view of the giant falls makes it all better and worth it. The water comes in fast at you as this is only a midway stop for the river that goes on to join the holy Netravati River in Uppinangadi before flowing out into the Arabian Sea. Do be careful and avoid being too close to the waters, especially during monsoon season. 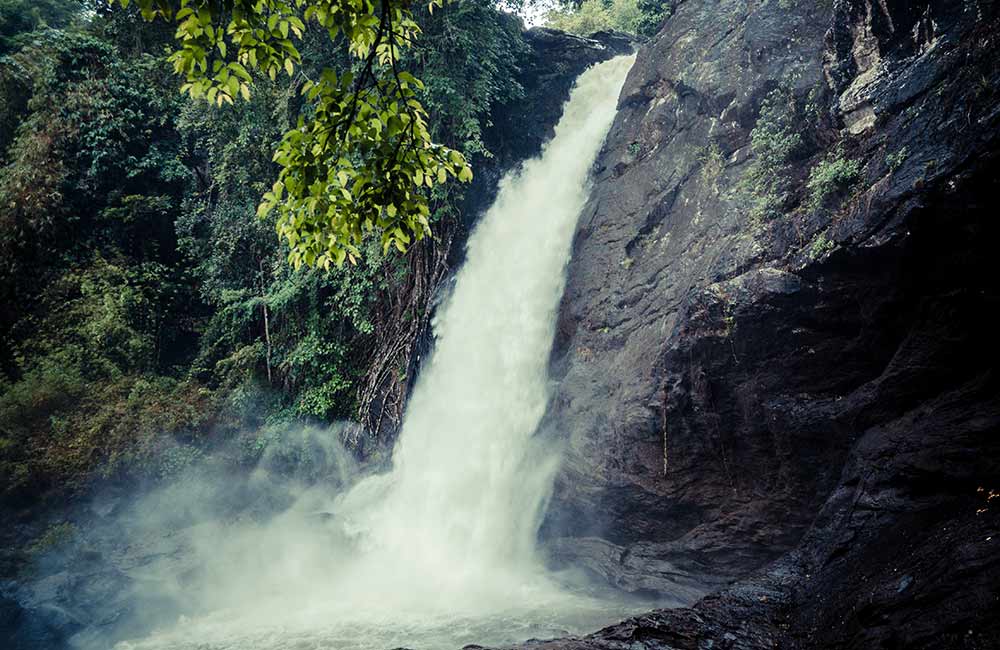 Treetop huts, a trek through a dense, green forest and the chance to spot a deer…and all of this even before you’ve reached the stunning Soochipara waterfalls! And, once you’ve arrived, there’s a beautiful pool of water at the bottom of the falls, waiting for you to dive into. We’d say those are enough reasons to pack a change of clothes and head to Soochipara Falls. A three-tier waterfall, dropping from a height of 660 feet, this is easily one of the most stunning tourist places near Mysore.

Also known as the Sentinel Rock Waterfalls, its local name comes from two Kannada words – Soochi, which means needle; and Para, which means rock. When you see the rock that forms the backdrop of the falls, you’ll be able to see the needle-shaped orifice, from which the water is coming out, justifying its name. And, that rock is for more than just looking awesome – you could climb it! Sounds like something you’d want to try? If not, then just swimming in the plunge pool is adventurous and relaxing…either way this one is full value for your money. Put it on your list!

Catherine Falls (#10 of 11 Waterfalls near Mysore) 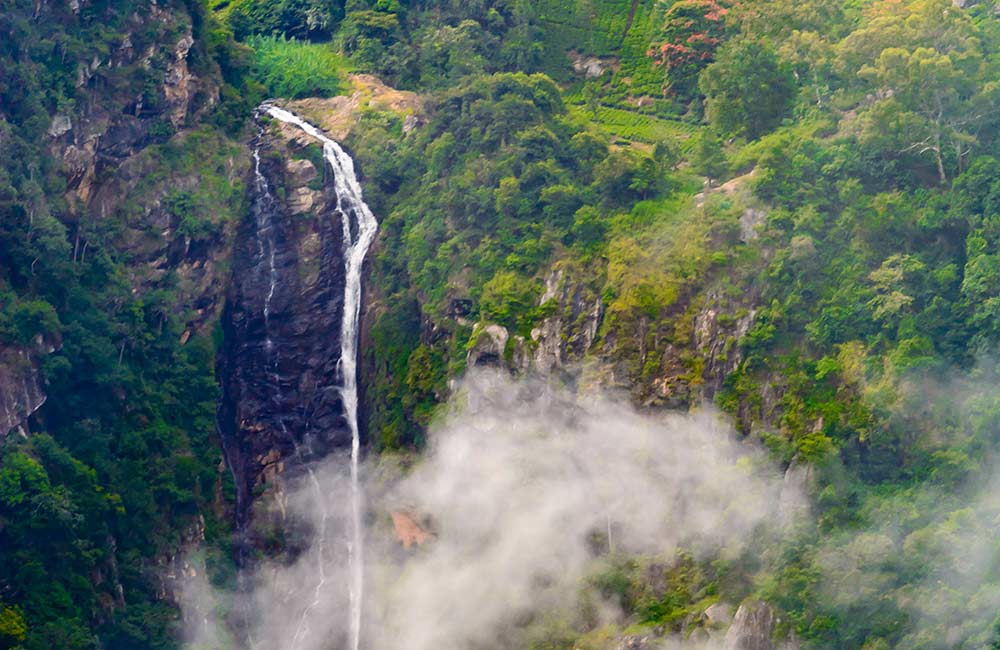 Surrounded by lush, green tea estates, Catherine Falls in the beautiful Coorg district is one of the area’s best-kept secrets. A thin stream of water falling from about 250 feet might not sound like much, but the fabulous pool it forms at the bottom and the fact that you can get really close to it make up for a wonderful time here. Locally known as Geddhehaada Halla, the falls were named after the wife of MD Cockburn, a Scottish coffee planter, who introduced coffee cultivation to the region. Visit this fall for a day outdoors, pack a picnic and have some good old-fashioned fun!

Hogenakkal Falls (#11 of 10 Waterfalls near Mysore) 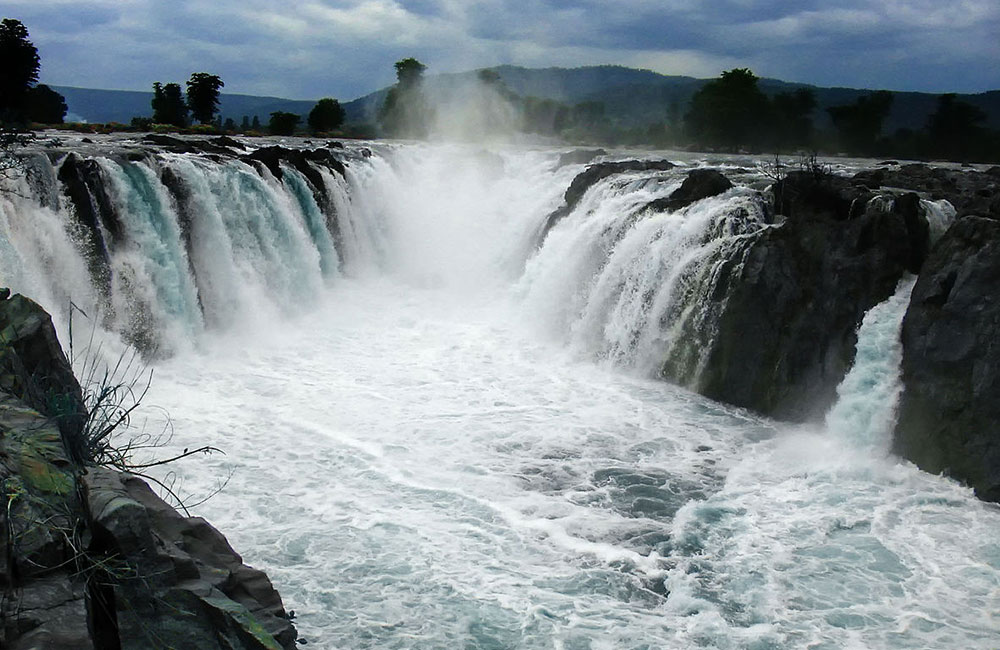 The beautiful Cauvery River is the source of many waterfalls near Mysore. With its joyful, meandering course, the river carves out the igneous rocks of the plateau to create these little drops of heaven on earth. One such incredible place is Hogenakkal Falls, where the river cuts through carbonatite rocks (considered to be some of the oldest anywhere in the world!) to give us a spectacular waterfall. Sometimes known as the ‘Niagara Falls of India’, Hogenakkal Falls is 66 feet tall, and the falling water makes the sound of continuous thunder here – not something you’d forget easily.