Ah, Goa! The name seems to have become synonymous with gorgeous beaches, sumptuous seafood, and crazy night-long parties. There’s something about the laid-back sun-and-sea ambiance of Goa that never leaves you bored, even after repeated visits. But, the party capital of India is alive with other treasures as well, if only you care to look around! One such treasure is its mighty forts.

If you travel on the roads less taken in Goa, you will discover meandering ways that lead to some of the most spectacular forts. While some of these historical forts are tourist hotspots, there are several others that remain in the shadows of Goa’s vibrant avatar. Yet, each of these forts has a story to tell and are impressive enough to make you stand and wonder. We present to you the top forts in Goa that talk magnificence.

With vast beaches, throbbing nightlife, vibrant markets, and great food, North Goa is “the Goa” we all dream and talk about. Add to this mix some grand forts and you get a great holiday experience. Here is a list of five famous forts in North Goa. 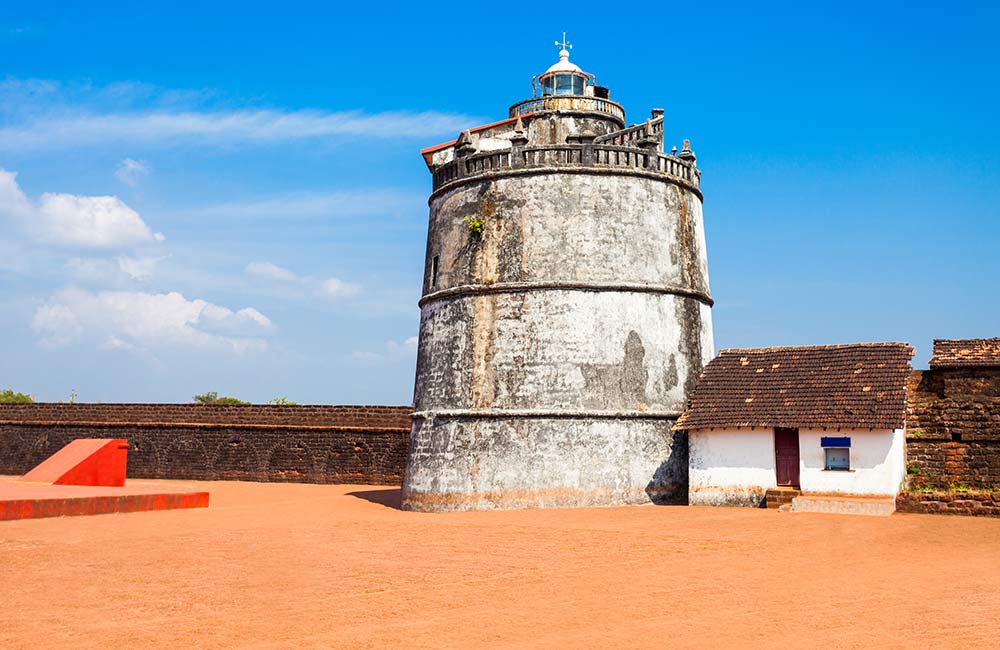 With the waves of the Arabian Sea caressing its lofty walls, Fort Aguada is one of the most iconic forts in Goa. Built several centuries back in 1612, the strategically located fort was the most prized structure for the Portuguese rulers. Situated at the mouth of River Mandovi, this massive and magnificent fortress presents a breath-taking view of the endless sea spreading away from it.

Among the many things that make it a star attraction among tourists is the four-story Portuguese lighthouse built in 1864. Though it was abandoned in 1976 and is no longer in use, this lighthouse stands as the oldest one of its kind in the whole continent of Asia. An interesting feature of Aguada Fort in Goa is the prison cells that were used during the administration of Salazar, the 100th prime minister of Portugal.

Looking for more reasons to take a trip to this famous fort? What if we told you that the fort has a secret passageway that was used during emergencies and wars? Wait, there’s more. It is one of the ideal locations from where you can catch (and click) a breathtakingly beautiful sunset with the sky painted in different shades of red serving as the background. Ah ha, you are already on your way to Fort Aguada, aren’t you? 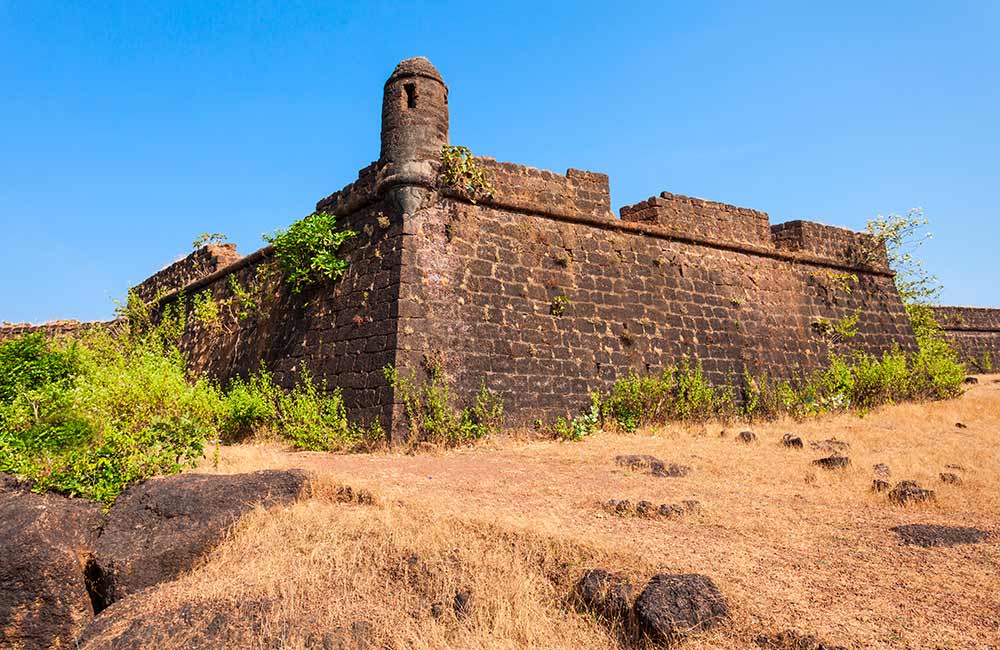 Remember the Bollywood movie Dil Chahta Hai that told us the story of three friends, Akash, Sameer, and Siddharth? The movie captured the Chapora Fort in a few scenes and brought it to the limelight of travelers from all over the country. Since then, people have been calling it Dil Chahta Hai fort.

Rising high above the Chapora River, Chapora Fort remains a testimony to many chapters of history that unfolded at this location. The fort, which dates back to 1717, is undeniably an integral part of Goa’s rich heritage. The hill-top location of the fort offers it commanding views in every direction. With steep slopes on all sides, the fort provided an excellent defensive advantage to the occupants during its heydays.

Today, it stands as one of those forts in Goa that have lost out much of its grandeur to time. All that remains are its gigantic walls and several tombstones. Even the church that once stood inside the complex has completely disappeared. Nonetheless, the place is still worth a visit if only for the fascinating view of Vagator Beach that you can get from this high-up position. 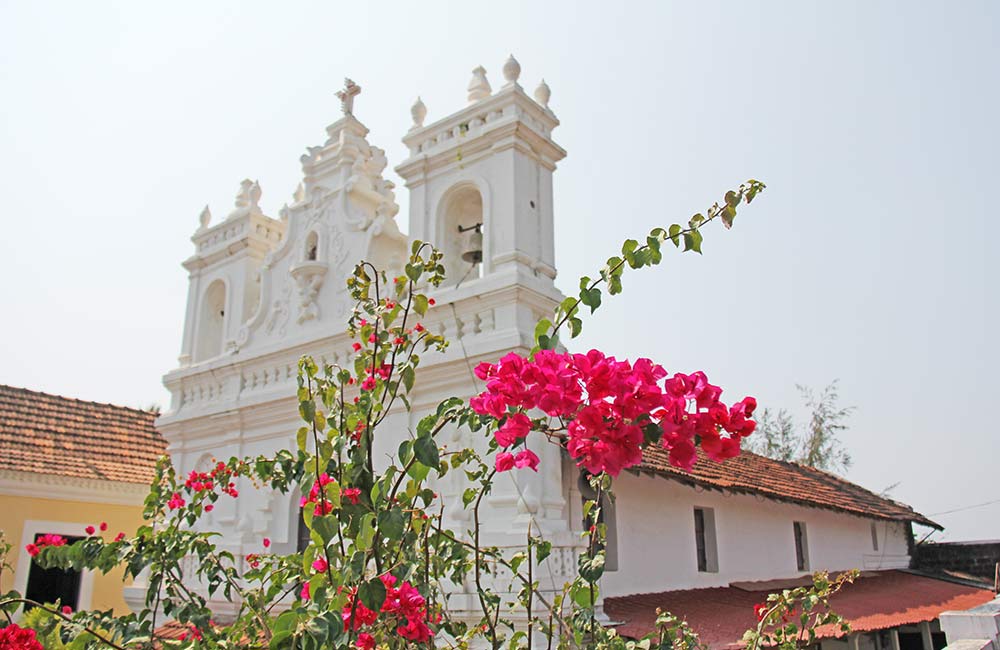 Whether you call it Tiracol Fort or Terekhol Fort, it is a famous fort in Goa that offers you a sweeping view of the countryside. Gracing the Tiracol River at its mouth, the spectacular fort was once a crucial part of Portuguese maritime defenses. It will take you a ferry ride from Querim to reach the location of this fort. It was Maharaja Khem Sawant Bhonsle, the ruler of Sawantwadi, who built this magnificent structure in the 17th century. In those initial days, the fort boasted a barrack, 12 guns, and a tranquil chapel, but much has changed since then. The fort suffered extensive damage and lost its charm to a certain level.

However, not all is lost! Today it has been converted into a heritage hotel with the aim to preserve its beauty and offer tourists a chance to stay inside this heritage structure. Even the church is present inside the fort complex, but its doors are opened to welcome the general public only on certain special occasions.

If you are planning to visit this fort, don’t forget your camera and lenses. The mesmerizing views are sure to inspire the photographer in you to capture quite a few stunning shots! 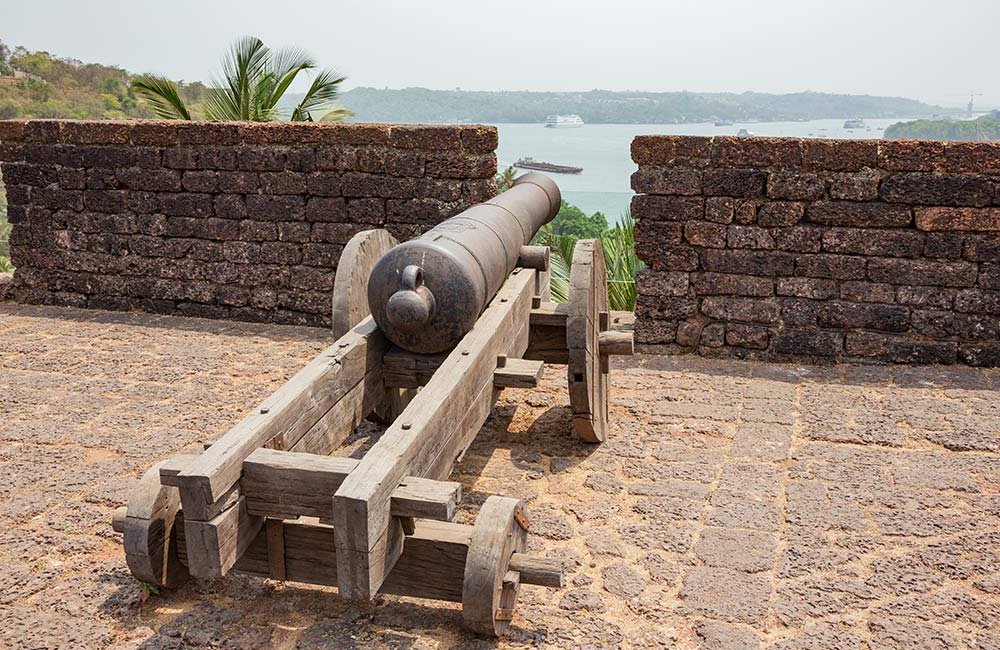 Fancy visiting a fort that has been standing guard almost completely intact on a hilltop in Goa for more than 460 years? Then you need to check out Reis Magos Fort, the origins of which date back to 1551. Robust laterite walls and enticing Portuguese turrets adorn the fort. The structure served as one of the first bastions, where Portuguese rulers stood against the invasion of the enemies. During its long history, the fort has played many roles. It once served as the residence for viceroys and other important dignitaries landing on the shores of Goa and also as a prison in as recent as 1993, after which it was abandoned.

The fort may not be huge, but it definitely makes up for it by offering a fabulous view of the surroundings from its vantage position. Though the fort suffered some damage due to negligence, restoration work done on it has managed to bring back much of its lost glory. Now, it functions as a cultural center and is a renowned tourist attraction in Goa. And, the best part? You can even rent the fort for weddings, exhibitions, parties, music shows, photo shoots, and the like! 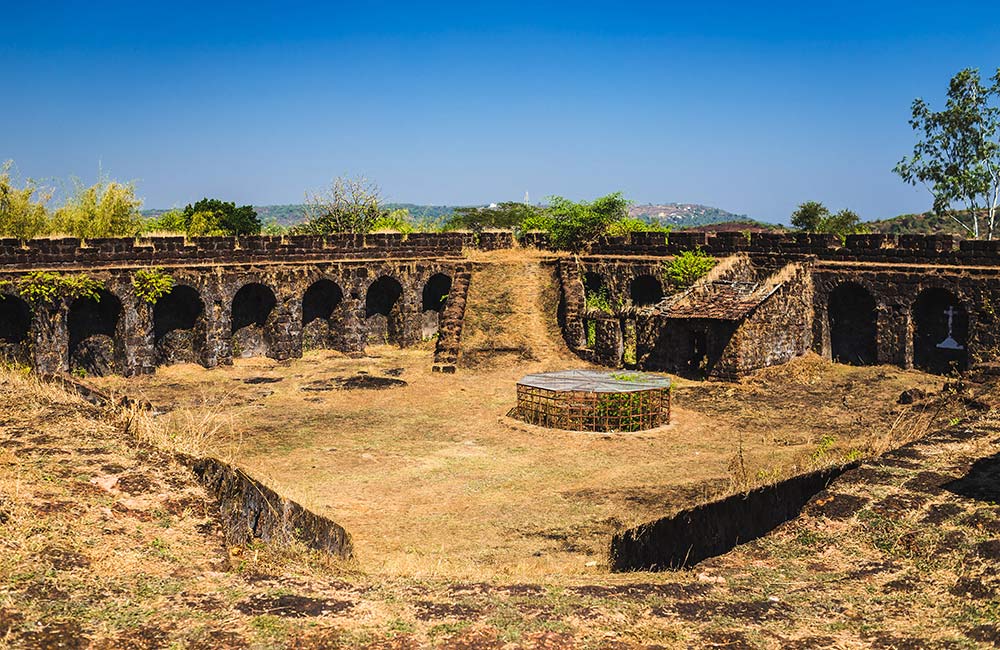 If you think that forts are always colossal structures, then you obviously haven’t paid a visit to Corjuem Fort yet. One of the smaller forts in Goa, it owes its origin to the Maratha rulers who constructed it in the early part of the 18th century. The fortress stands on an island in Corjuem River at a distance of about 4 km from Aldona village. When the fort came under the control of Portuguese rulers, it got a makeover that reflected the taste of its new occupants. They used it as a military fortress to strengthen their defense base in this coastal part of India. Today, the fort is a protected monument and attracts tourists all year round. What Corjuem Fort loses out in size, it makes up for in vistas. Yes, the fort offers spellbinding views of the river and the land beyond it. Don’t miss out on this fort during your next trip to Goa.

South Goa might not be as hip and happening a place as its northern counterpart, but the place certainly has its share of history, heritage, and of course, forts. Here’s a list of must-visit forts in the southern part of India’s party capital. 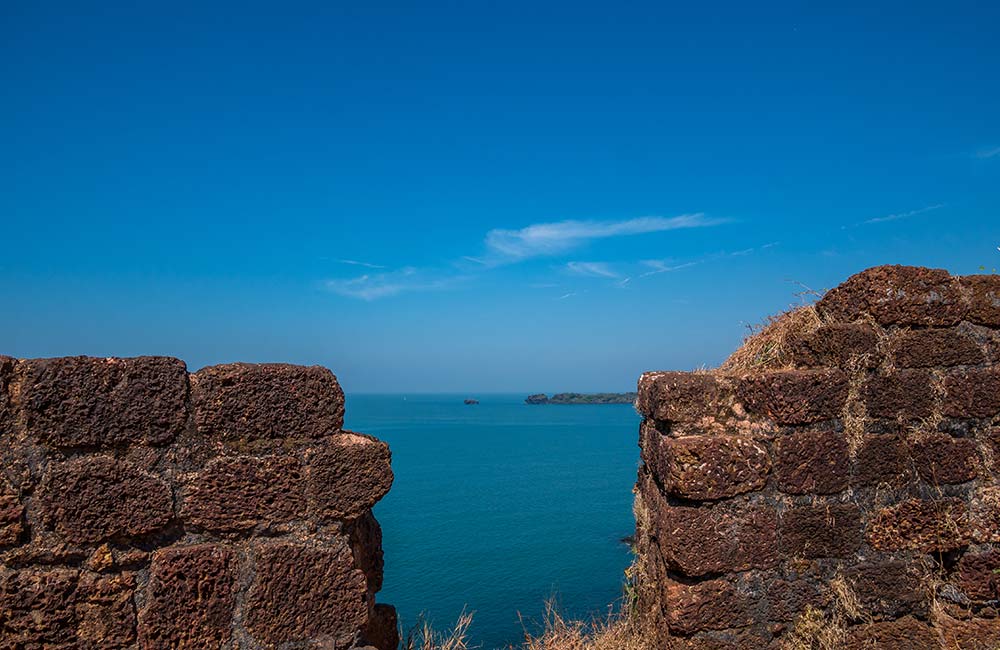 Considered to be one of the oldest forts in Goa, Cabo de Rama was once under the Hindu rulers of the land. But later, the fort was passed on to the Mughal rulers and finally, it came under the dominion of the Portuguese. Unsurprisingly, there are quite a few legends associated with this place, each telling us a story about its rich cultural past. One legend says that the fort and the cape have been named to honor Lord Rama from the Hindu epic Ramayana. According to the legend, Lord Rama stayed at this place with his wife Sita during their long period of exile from Ayodhya.

In more recent times (till 1955), the fort served as a prison before it was abandoned. Today, it features houses the Church of Santo Antonio, which is in a fine condition. At any day, you can find quite a few devotees praying at this church, though you are more likely to come across tourists who flock to it for its tranquil environment and the magical views it offers. 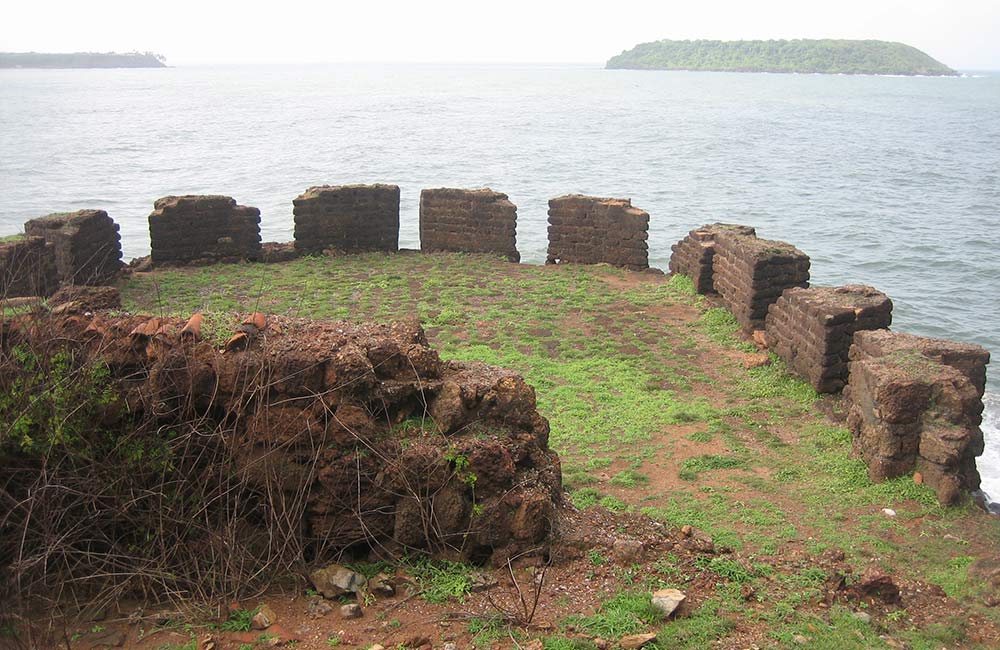 Adorning the mouth of River Zuari, Mormugao Fort stands as a prominent reminder of Portuguese colonialism over this coastal land. It traces its history to 1624 when it was built with the aim to protect the port in the region. As such, it served as a strategic coastal fort for some time before it was abandoned by the Portuguese as they turned their attention to other parts of Goa.

Before it became a ruined structure, it featured two lovely fountains and a chapel. Though the fountains are not to be seen today, you can still visit the chapel. The fort gates carry inscriptions that give a glimpse into its storied past. Tourists visiting this fort are rewarded with spectacular views of traditional fishing boats lining up along the shores of Varca Beach.

They say history never bids goodbye to any. It, on the other hand, says “see you later”. Forts are places where we, the mortals, bump into the immortal history in all its glory and details. Next time you plan a trip to Goa, make it a point to visit some of these forts where stories from the past are waiting to be told, again and again. You can book hotels in Goa near these forts and begin your exploration of a side of the state which many overlook.