If you are on your maiden trip to Goa, lazing on the sun-kissed beaches, surrendering to the titillating play of waves, attending a few happening parties, exploring the magnificent churches, and tasting the mind-blowing local cuisine will make for an excellent itinerary. But, if you are a traveler, who wants to feel the pulse of Goa beyond beaches and churches, you are definitely in for an amazing experience.

Also known as the Pearl of the Orient, Goa is a treasure trove of places and structures that showcase a unique façade of this party destination. Take, for instance, the case of historical temples in Goa. Temples are not something you would normally associate with Goa, but believe it or not, the place has some of the most wonderful temples that are worth a visit any day. That’s not all! Here, you also come across temples featuring a combination of Portuguese, Mughal, European, and Jain architectural styles. Let’s take a look at nine of them. 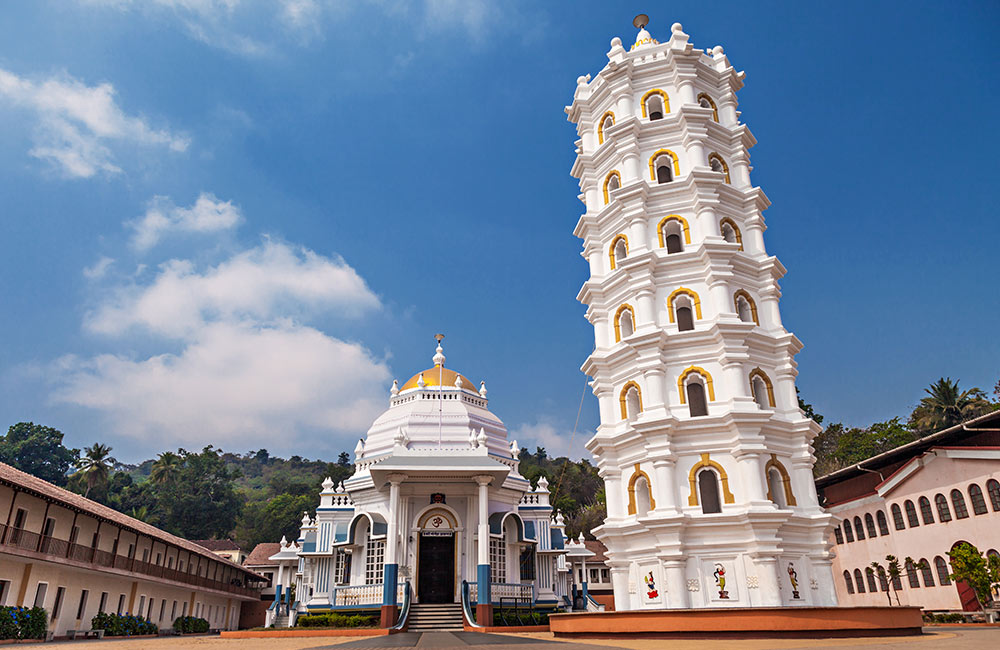 Mangeshi Temple | #1 of The Best Temples in Goa

With a history of more than 450 years, Sri Mangeshi Temple in Goa is one of the largest and most visited shrines in this land of sea and sun. It is dedicated to Lord Mangesh, an incarnation of Lord Shiva, who is worshipped as a linga here. The temple architecture is an enticing sight of balustrades, domes, and columns. A magnificent water tank is part of the temple complex. At the entrance, you will come across a seven-story octagonal deep stambha or lamp tower. Constructed in Goan temple architecture style, this majestic tower becomes a sight to behold when lit with oil lamps during festive nights. Read also about Things to do in Goa

If you visit this temple on a Monday evening, you will be able to witness the weekly procession of Lord Mangesh in a palanquin; it takes place before the evening aarti. Interestingly, you are not likely to come across another temple dedicated to Lord Mangesh in any other part of India. So, don’t miss out on visiting this temple on your trip to Goa. 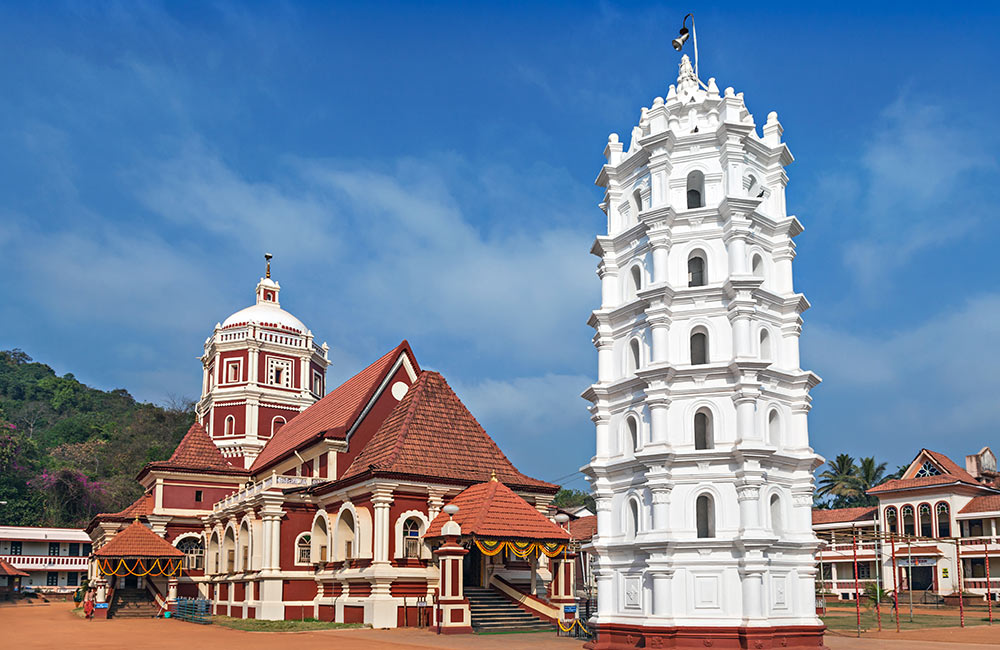 Shanta Durga Temple | #2 of The Best Temples in Goa

The famous Shanta Durga Temple in Goa also traces its origins to more than 450 years back. Goddess Durga is worshipped as a mediator between Lord Vishnu and Lord Shiva at this temple, and hence the name, Shanta Durga or peaceful Durga. The image of the deity depicts her as holding two serpents, one in each hand. It is believed that the serpents represent Lord Vishnu and Lord Shiva.

Built in the Indo-Portuguese architectural style, the temple structure features a Pyramidal Shikhara and Roman arched windows that are seldom seen in Goa’s temples. The huge five-story deep stambha or lamp tower and the big lake are additional attractions here. On festive occasions, the goddess is carried out in a procession in a golden palanquin. 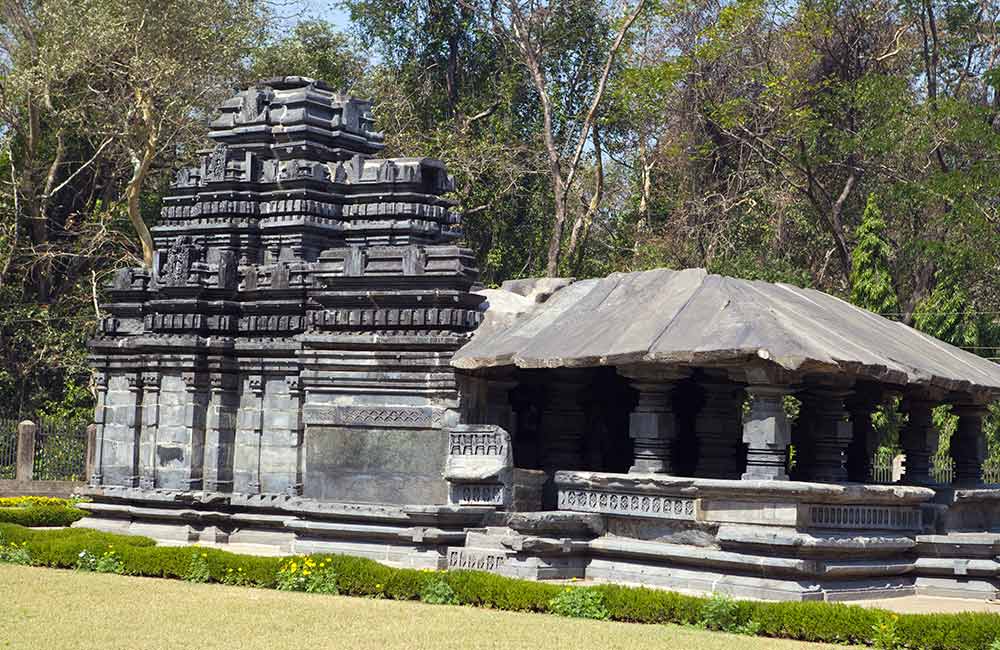 Mahadev Temple | #3 of The Best Temples in Goa

A historical Shiva temple in Goa, Mahadev Temple is considered to be the oldest shrine in the entire region. A linga is housed in the inner sanctum sanctorum of the temple. Constructed in the Jain style, the temple dates back to the 12th century. What makes it so special is the fact that it is the only structure representing the Kadamba-Yadava architectural style that can be seen in Goa today. Intricate carvings adorn the walls of the basalt stone shrine, making it a visual treat to your eyes.

Located in a dense jungle, the temple can be described as a hidden gem of Goa. The lush greenery surrounding it adds to the beauty of the shrine. During the annual festival of Mahashivratri, scores of devotees throng it to pay their obeisance to Lord Shiva. If local legends are to be believed, a huge king cobra resides inside the temple during the night. Now, doesn’t that add to the mysterious allure? 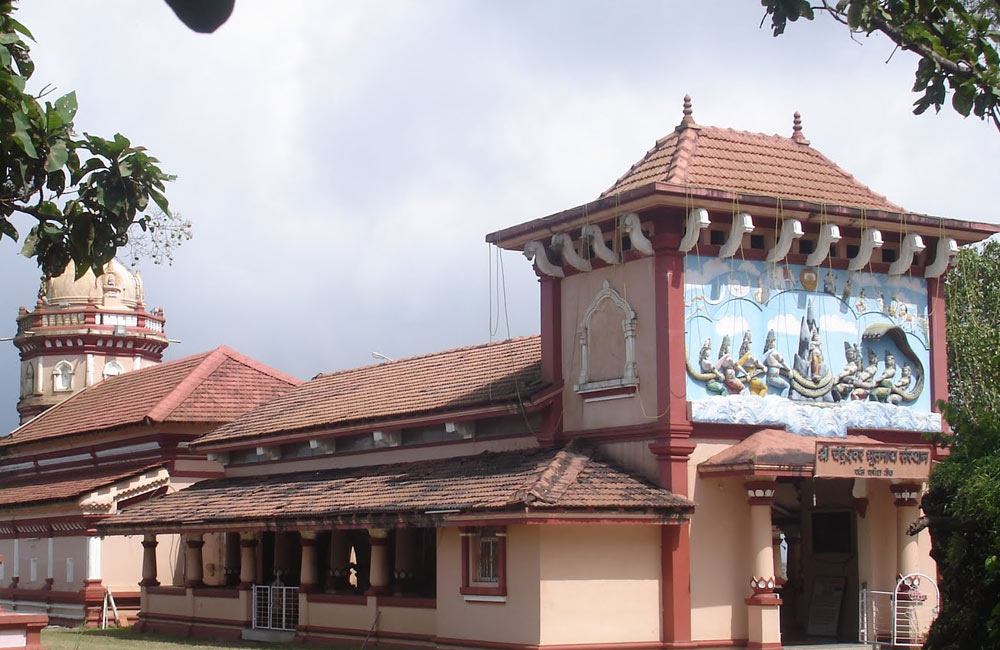 Chandreshwar Bhoothnath Temple | #4 of The Best Temples in Goa

Chandreshwar Bhoothnath Temple is one of the most visited temples in South Goa. This ancient temple is situated on top of the Chandranath Hill; hence, doubling up as a vantage point. You can either climb up the granite steps to reach the temple or drive on the motorable road that leads to it. Lord Shiva is worshipped here as the Lord of the Moon. The Shiva Linga inside the shrine is positioned in such a manner that it shines resplendent on full moon nights, which is a wonderful sight to witness. It is also said that water flows out of the linga, whenever the moon illuminates it!  also read about places to visit during night

While here, you can also visit a smaller temple located nearby. This temple is dedicated to Bhoothnath, the lord of the ghosts, which is another manifestation of Lord Shiva. Whether you believe in ghosts or not, a visit to Chandreshwar Bhoothnath Temple will definitely be a delightful experience for you. 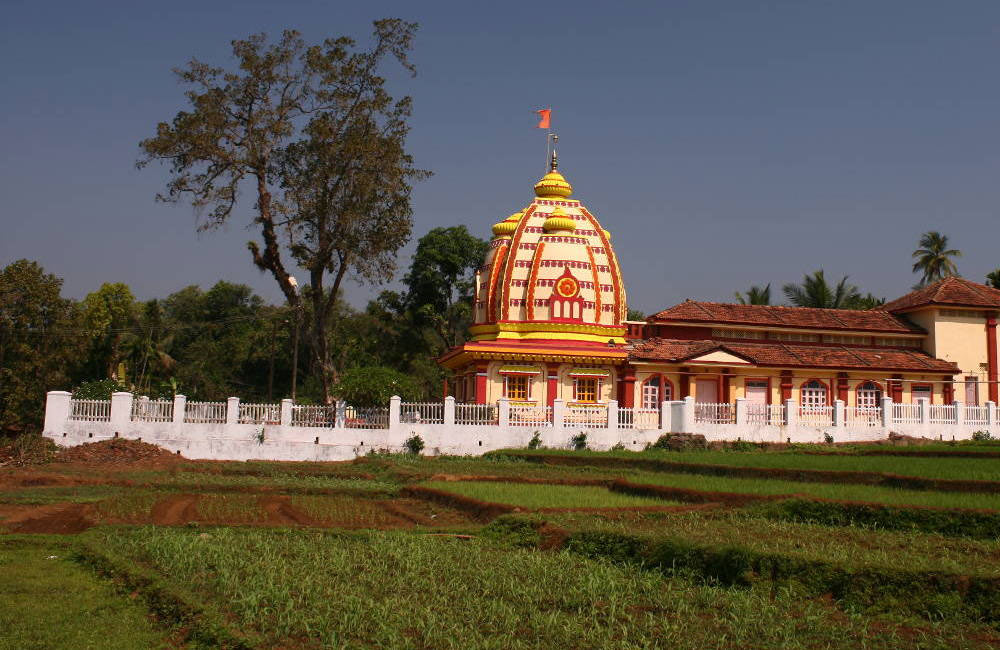 Brahma Temple | #5 of The Best Temples in Goa

Brahma Karmali Temple or the Brahma Temple is the only temple in Goa that is dedicated to Lord Brahma, the creator of the universe as per Hindu mythology. The intricately crafted idol of Lord Brahma enshrined in this temple is believed to date back to the 12th century. In this idol, Lord Brahma appears along with Lord Vishnu and Lord Shiva. What strikes visitors about the temple is the serenity of the place where it is located. The temple complex is ideal to spend a few moments soaking in the calm ambiance. 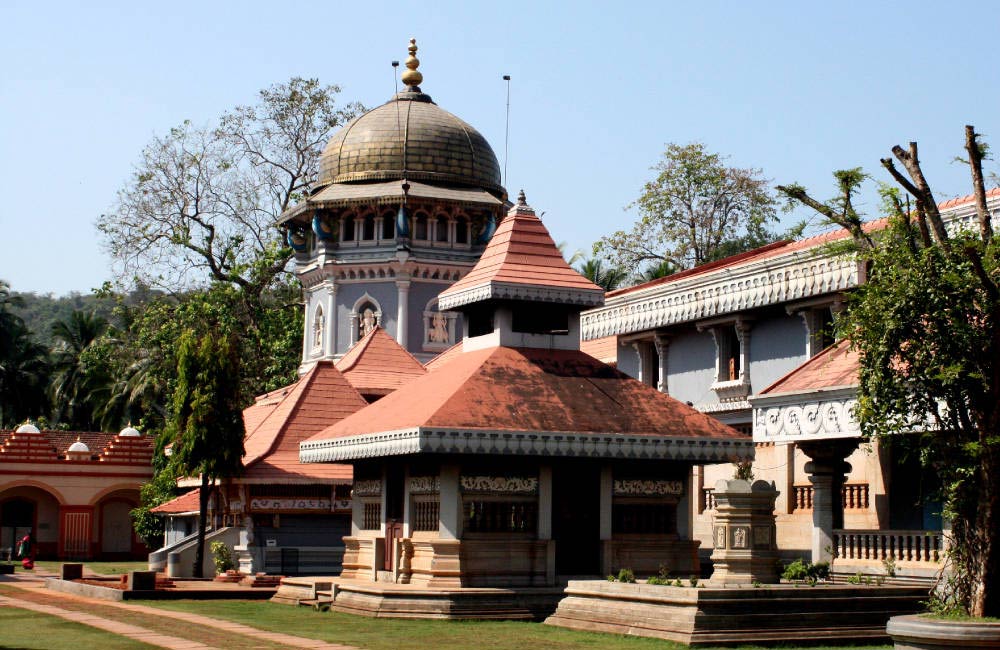 Mahalasa Narayani Temple | #6 of The Best Temples in Goa

Mahalasa Narayani Temple has a place in the list of unique temples in India. The temple is dedicated to Mahalasa or Mohini, the female incarnation of Lord Vishnu. It is rare to come across a temple in India where Vishnu is worshipped in both the male and the female form. The history of the temple can be traced back to the 17th century.

An interesting feature of the temple is the beautiful brass oil lamp that is 12.5 meters in height and is believed to be among the largest in the world. This lamp is lit on all the major festivals celebrated in the temple, offering a pleasing sight to visitors. A huge brass bell is also present in the temple; it doesn’t have a ringer though. In earlier days, the ringer used to be attached to the bell only when someone wanted to testify. According to the prevalent legend, anyone who lies while the bell is being rung is punished with death within three days by the presiding deity of the temple. 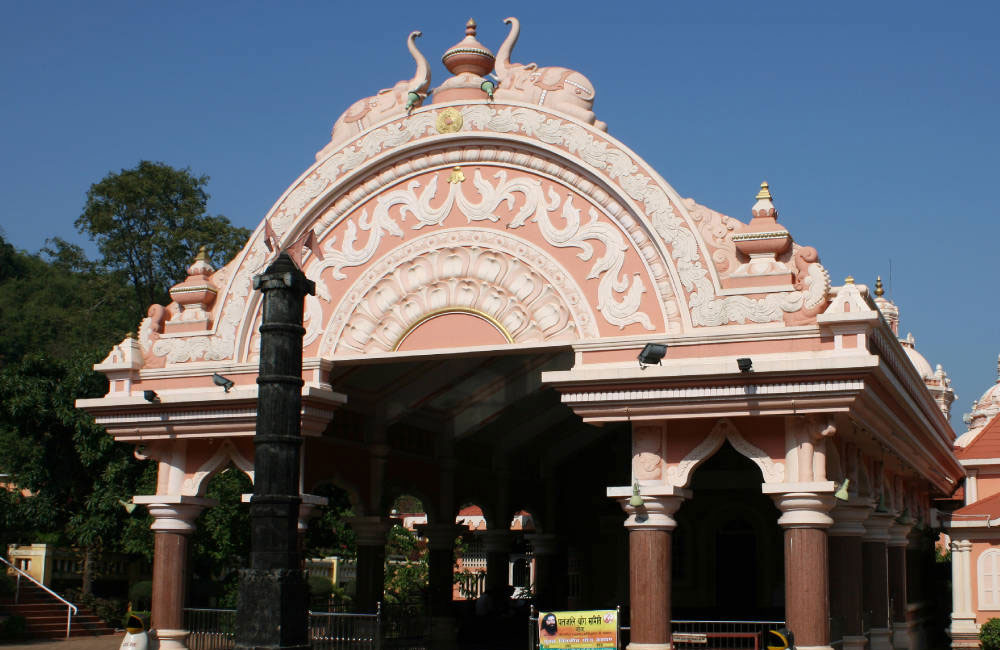 Mahalaxmi Temple | #7 of The Best Temples in Goa

As the name indicates, the presiding deity of this temple is Goddess Mahalaxmi, the goddess of wealth, power, and strength. The beautiful temple features a silver arched doorway and a pillared hall. Among the main highlights of the temple are the twenty four wooden panels that display scenes from the Bhagavata Purana that are majorly stories related to Lord Krishna. The idol, made of black stone, is shown to have four hands. It resembles the idol of Mahalaxmi in Kolhapur, which is the main center of worship for the goddess in India. 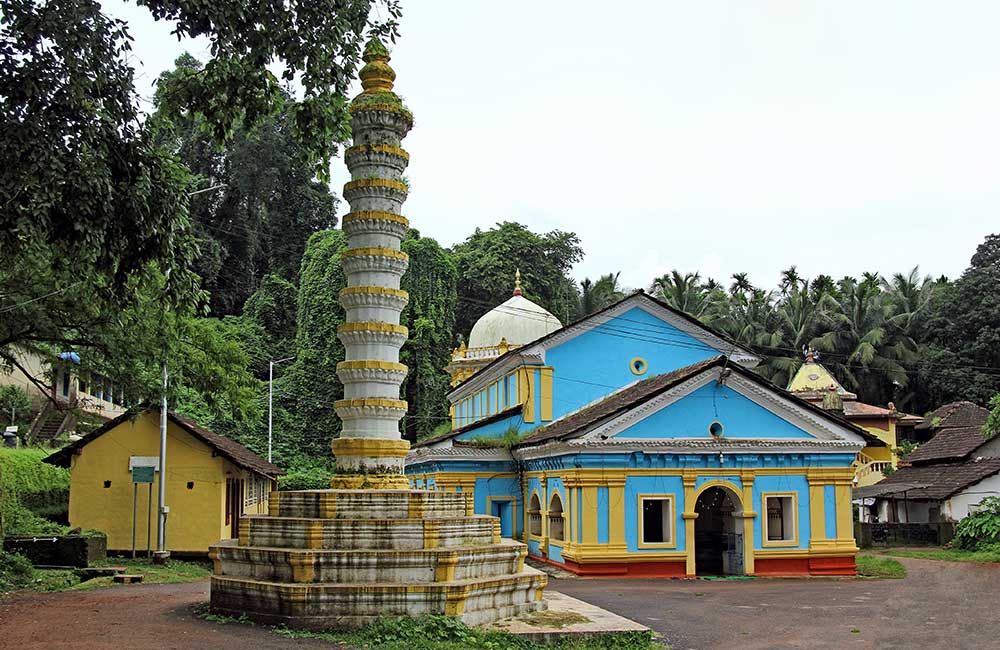 Saptakoteshwar Temple | #8 of The Best Temples in Goa

Considered to be one of the six main shrines of Lord Shiva in the whole Konkan area, Saptakoteshwar Temple attracts attention due to its architectural beauty. An amazing feature of the temple is its dome, constructed in the Mughal style. The mandapa is built in the European style, while the tall deep sthambha is unlike any at other temples in the state. The main pillared hall in the temple features lovely arches as well as chandeliers. The deity of the temple is Lord Saptakoteshwar, an incarnation of Lord Shiva, whose idol is enshrined inside a wooden sanctum.

While the temple is a beauty in itself, reaching the temple can also be a lovely experience. You can take a ferry ride to reach the temple from the island of Divar. Whether you are a devotee of Lord Shiva or not, this magnificently built shrine should be on your list of must-visit temples in Goa. 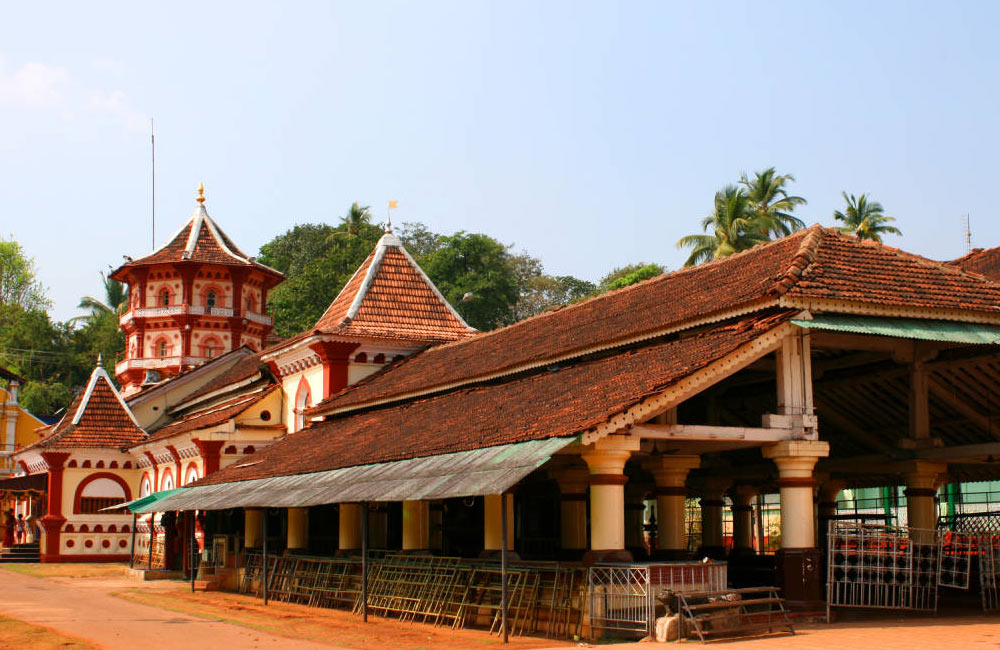 Kamakshi Temple | #9 of The Best Temples in Goa

True to its name, the Kamakshi Temple in Goa is dedicated to Goddess Kamakhya or Kamakshi, a much-revered deity in Assam. She is one of the main goddess associated with the tantric cults. The temple attracts attention due to the splendid idol of the goddess that has been made from a Salagrama shila. The main tower of the temple has a spectacular design resembling a Buddhist pagoda. Images of hooded serpents can be seen along the corners of the temple roof. A large water tank enhances the beauty of the temple complex.

Adding to the charm of the temple is the peaceful ambiance and the beautiful surroundings. This temple may not be among the largest or the most popular in Goa among tourists (not devotees), but it is definitely one of the most amazing in Goa.

These are just a few of the many amazing temples that dot Goa’s landscape. If you want to explore the beauty of these marvelous Hindu places of worship, you can book one of the hotels in Goa that is near these. So, here’s to the many happy hours of your temple exploration in Goa and digging into the rich history and architectural beauty of this land, which is primarily known among party animals.