Visit these 22 Indian Destinations for an International Experience

Hold your horses. Before you get that visa stamped and board that flight to an international destination, simply because it looks amazing, you have got to check out our own Incredible India first. Our homeland has loads of breathtaking tourist places, which easily give their overseas counterparts a run for their money. Plus, a trip through India is any day a lot cheaper than to another country. For instance, a 3 or 4 star hotel here would cost a lot less than a similarly rated lodging, internationally. So, now that you are giving it a thought, here is our list of the hand-picked travel destinations in India that resemble some international place: 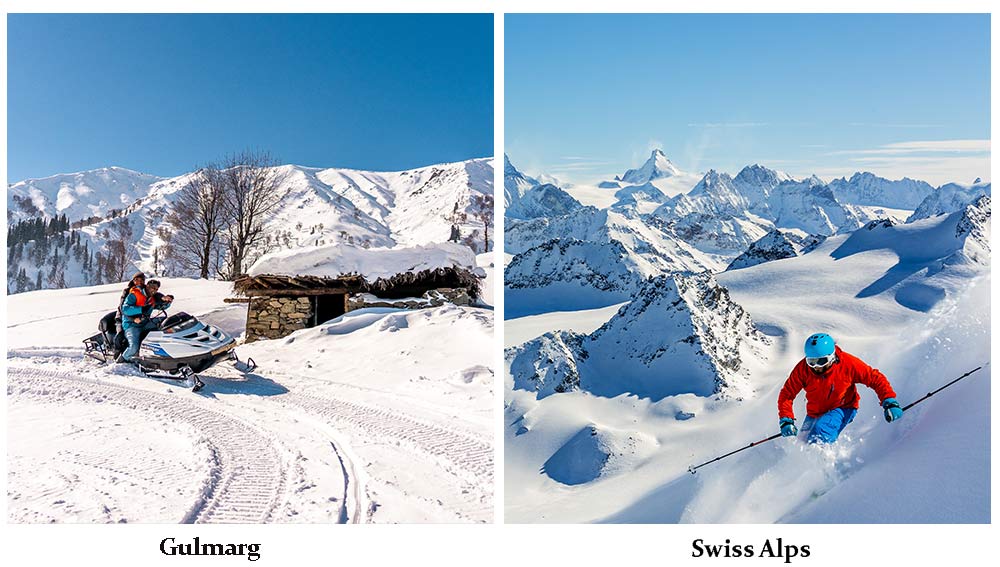 One of the quintessential winter destinations in India, Gulmarg will instantly take you to the Swiss Alps, with its high peaks, sheet of snow, little houses and loads of snow activities. Gondola rides, heli-skiing, ice hockey, skiing, snowballing, snowboarding, ice skating, snow treks and camping are just some of the fun-filled activities to do in this mountain resort. 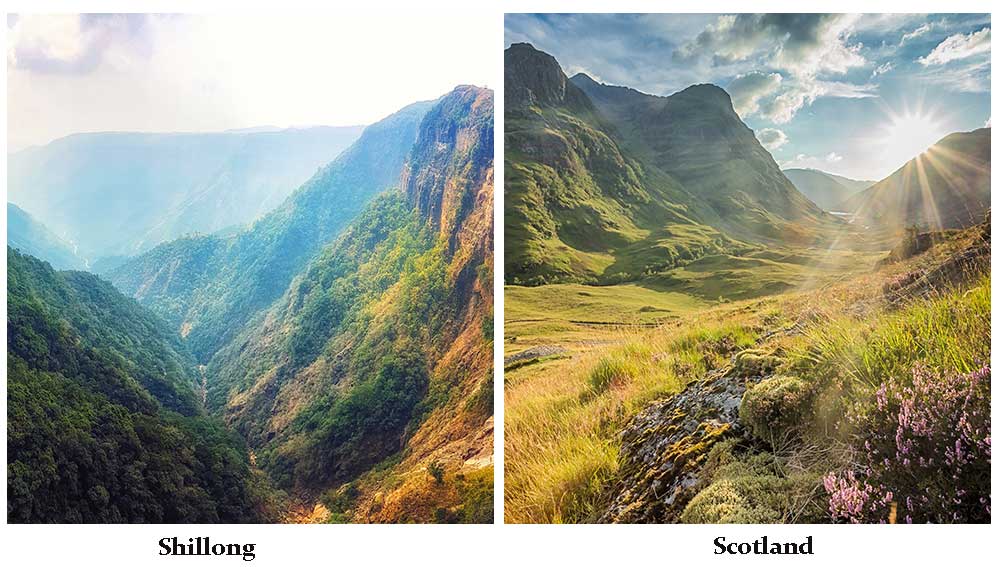 The capital of the hill state of Meghalaya, Shillong is widely known as the Scotland of the East, and with good reason. Its rolling hills and winding roads remind people of the Scottish Highlands, as does its cool climes and remnants of Christian culture. Additionally, the Indian hill city also boasts shimmering waterfalls and lakes, much like its European counterpart. 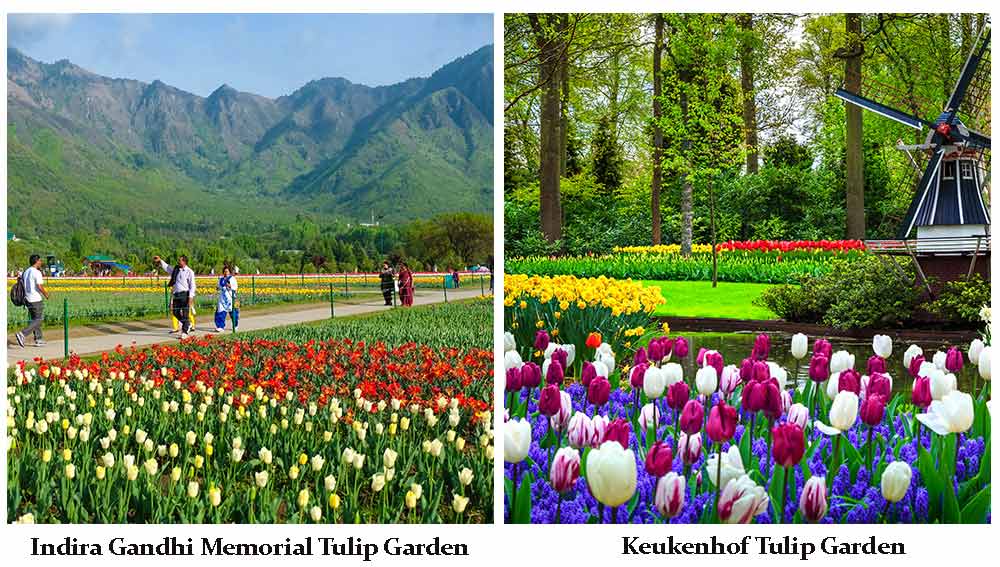 If Amsterdam has the Keukenhof Garden, Srinagar has the India Gandhi Memorial Garden; both of these are known for their wide variety of tulips on display. The biggest in Asia, the tulip garden in Srinagar is spread across an area of 30 acres. Other than tulips, you can see daffodils, hyacinths and ranunculus on its seven terraces, which create an unforgettable rainbow. 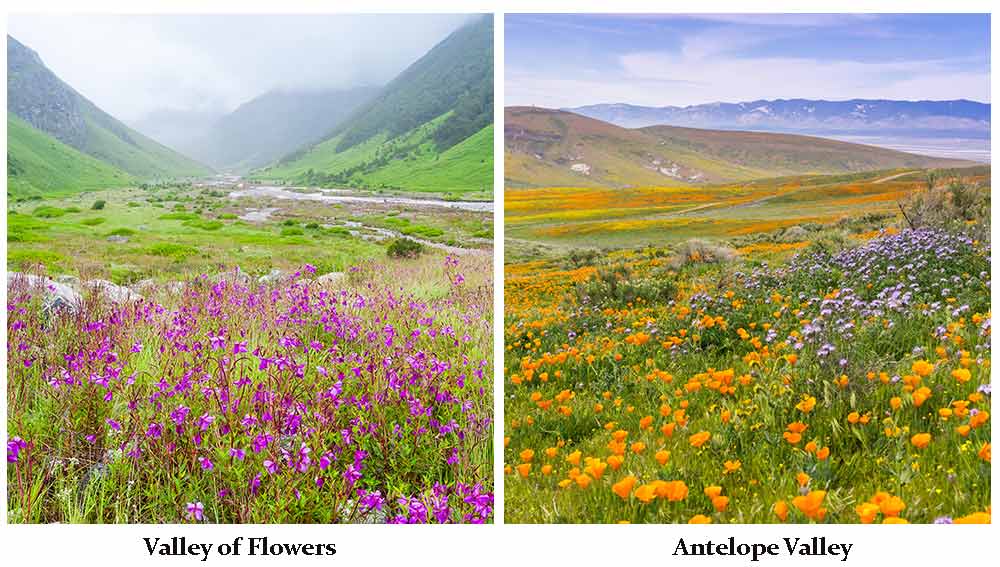 The awe-inspiring Valley of Flowers in the Chamoli district of Uttarakhand comes alive in the monsoon, when it starts to look a lot like the Antelope Valley in California, US, in spring. Valley of Flowers boasts hundreds of species of flowers and medicinal plants, many of which are found nowhere else on earth. Standing on a vantage point and looking as one colour merges into another is truly a scene to remember. 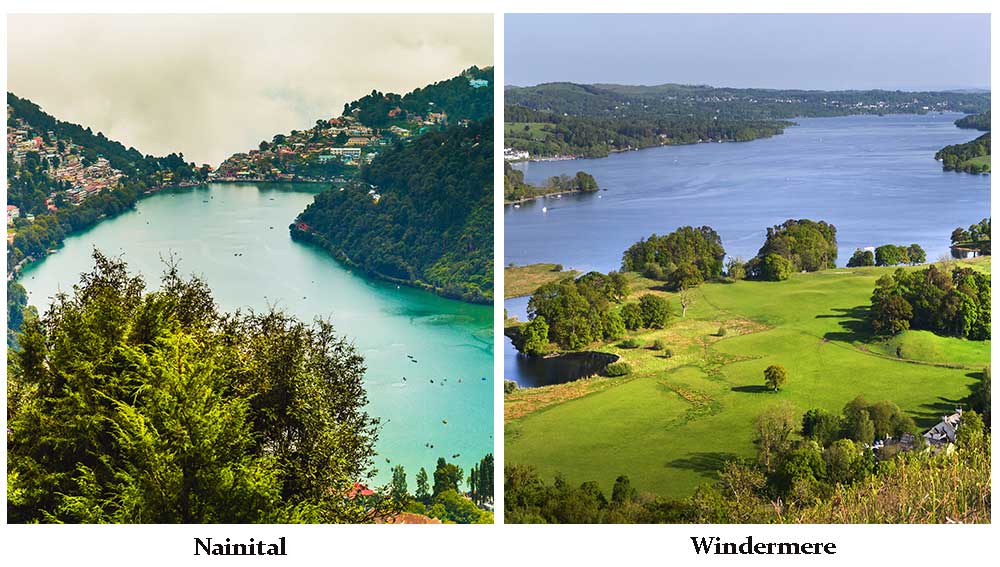 One of the most popular hill stations near Delhi, Nainital has similarities with the Lake District in England. In particular, the eye-shaped Nani Lake has a shape similar to that of Windermere, a lake in the said English destination. As Nainital hosts hundreds of tourists every month, better to make hotel and train reservations at least a month in advance. Go boating on the lake, trekking in the hills and shopping on Mall Road, when here. 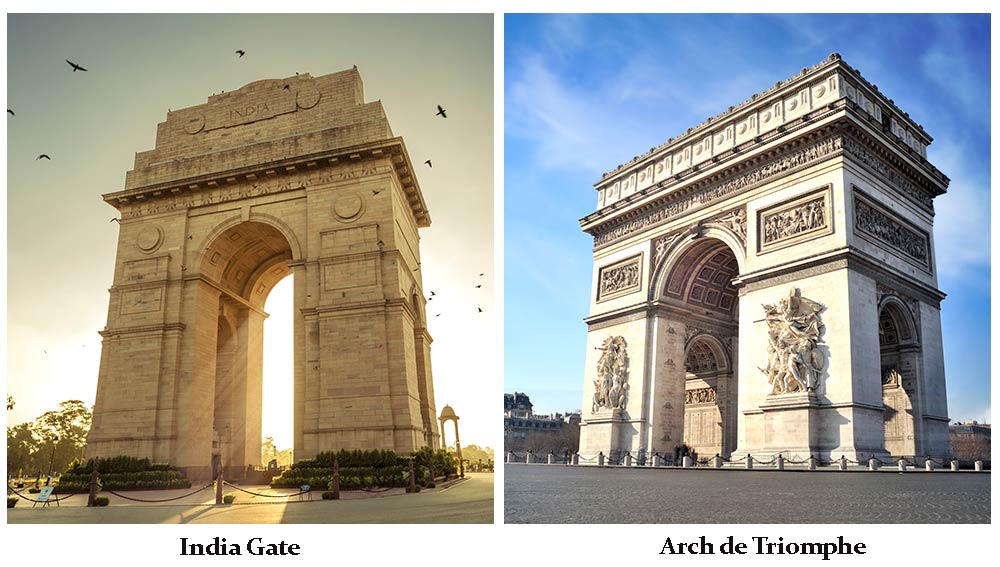 Perhaps the most iconic landmark of Delhi, India Gate is reminiscent of the Arch de Triomphe in Paris. Apart from paying homage to the Indian soldiers who died in World War I, you can sit and relax on the lush lawns, enjoy boating on the lakes and take a stroll down Rajpath. Evenings are perfect for outings with friends and family, as loads of food and snacks vendors set up shop here. 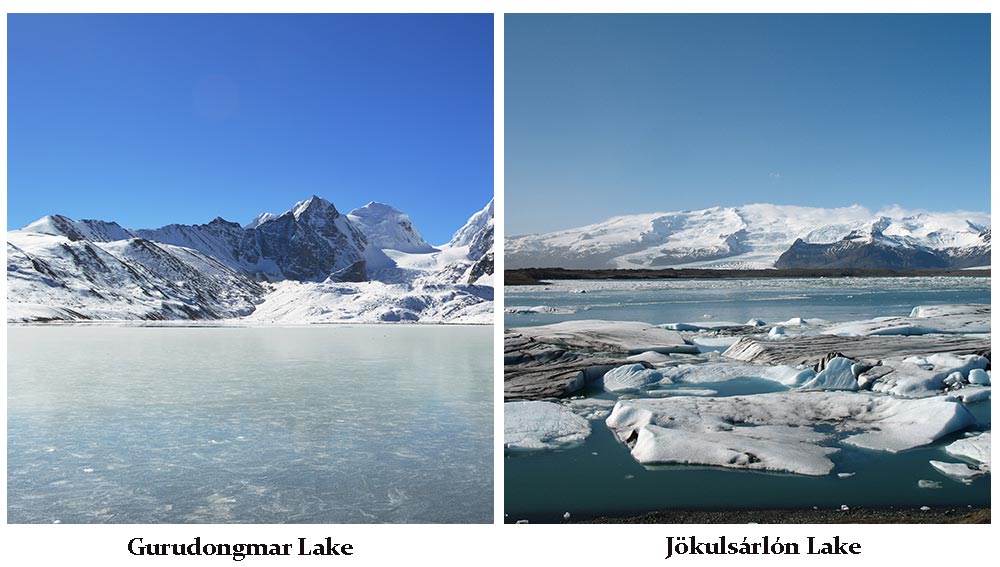 Gurudongmar Lake is situated at an altitude of 17800 feet in Sikkim, making it one of the highest on earth. Its crystal-clear waters, almost no vegetation for much of the year and high, snow-capped peaks all around remind many of the Jökulsárlón Lake in the frozen realms of Iceland. Even in –20 degree Celsius, a part of Gurudongmar Lake doesn’t freeze, which is attributed to the blessings of the Buddhist deity, Padmasambhava. 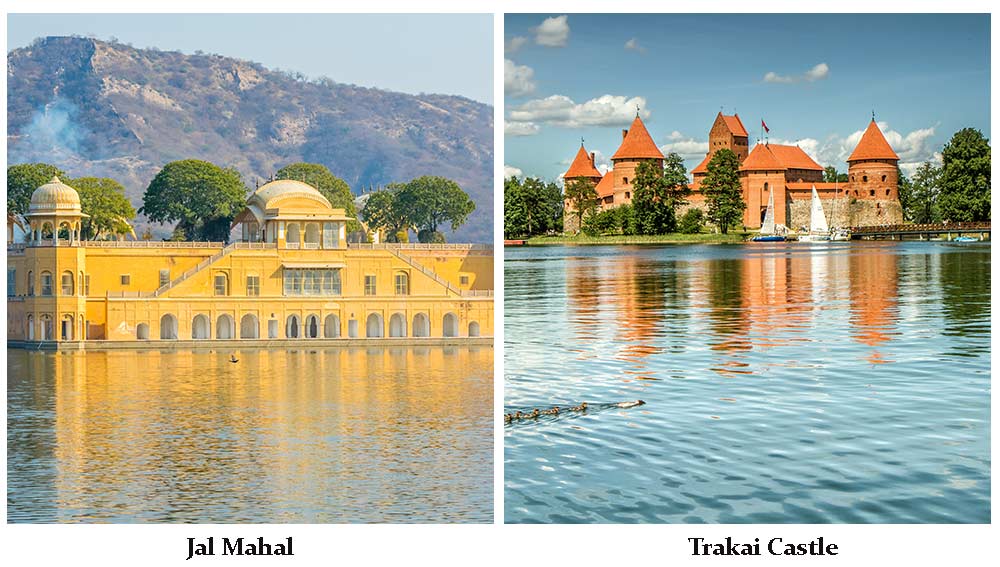 There are loads of castle built on water, but only a handful are as iconic as Trakai Castle in Lithuania. This 14th-century castle, built on an island in Lake Galve, speaks volumes of the Romanesque and Gothic grandeur. And, matching it bit for bit is our very own Jal Mahal, one of the must-visit attractions of Jaipur. Constructed in Man Sagar Lake, this opulent Rajput masterpiece has its four floors under water and only one above the surface. Seeing it all lit up in the evening is surely an experience to remember. 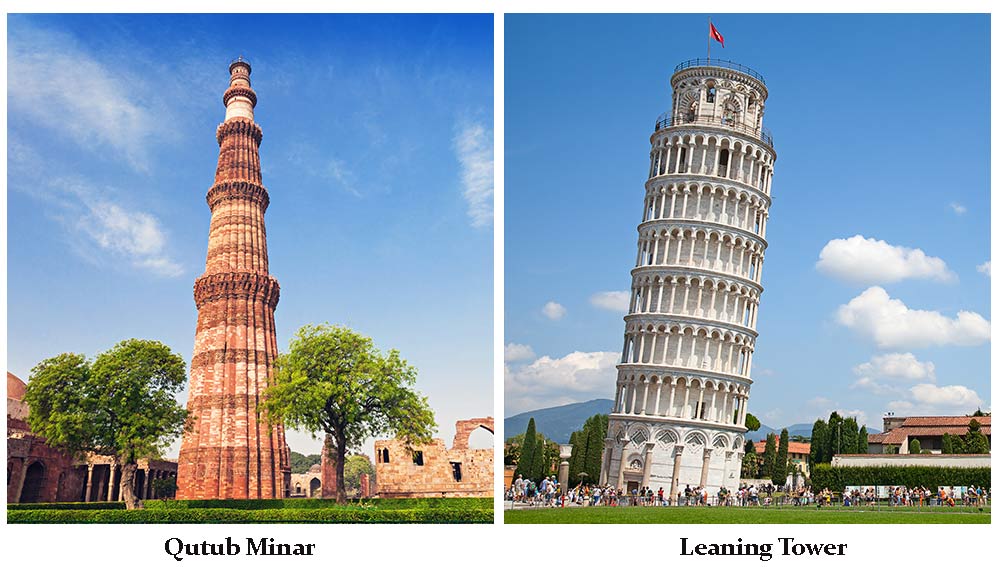 The iconic Qutub Minar in Delhi has a slight resemblance to the famed Leaning Tower of Pisa. Both have six storeys, the construction of both these towers started in the 1100s and ended in the 1300s; both are UNESCO World Heritage Sites and both are adjacent to another historical structure: Qutub Minar is adjacent to Alai Darwaza, whereas the Leaning Tower stands next to Pisa Cathedral. 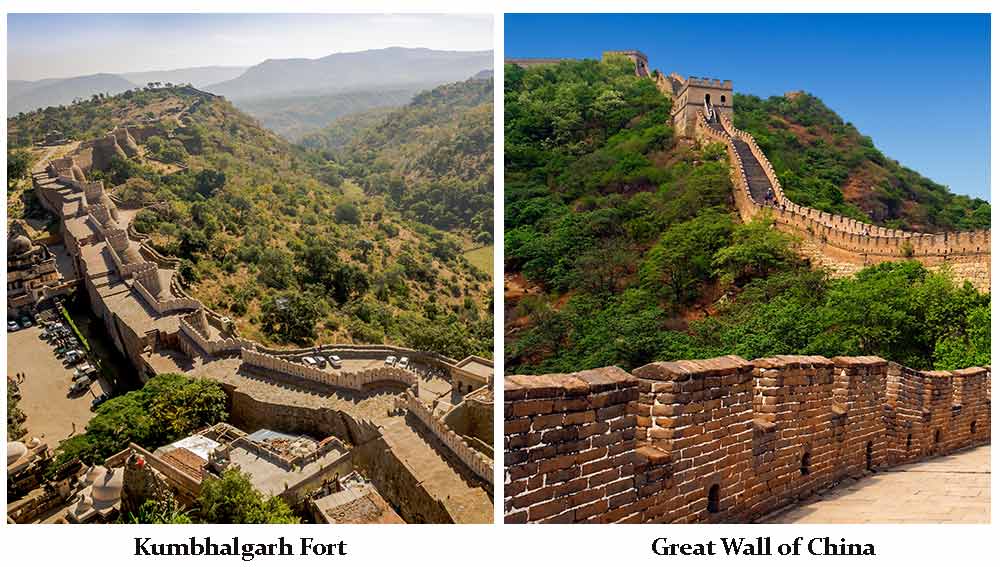 We have all seen the Great Wall of China, digitally or physically, but how many of us know about a similar gem in India — Kumbhalgarh Fort? At 36 km, its masonry walls are the second longest in the world, and together with its fortified towers, twisting and turning roads and hilly location, made it almost impregnable. Inside are ornate temples, durbar halls, palace structures and massive gates. 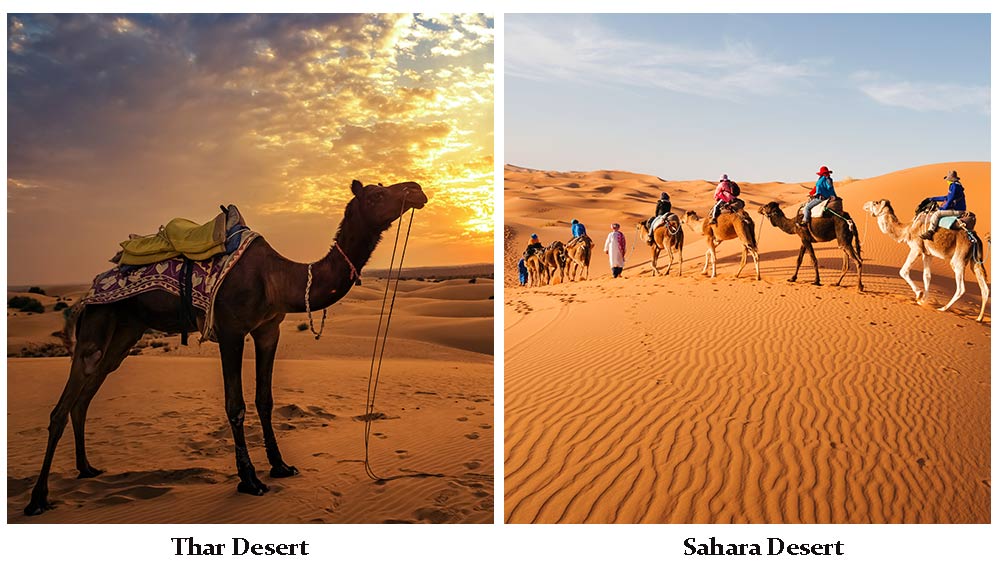 Why go to Dubai for a Jeep safari, camel safari, 4X4 ride, dune bashing or stay in a traditional camp, when you can do all that on Thar Desert! The latter gets a distinct edge with its Rajput forts, incredible wildlife, colourful culture and intriguing folk tales. You might not get the benefit of heading back to a multi-storey luxury hotel after your trip, but the generous hospitality of Rajasthanis and the various charms of the Thar more than make up for it. 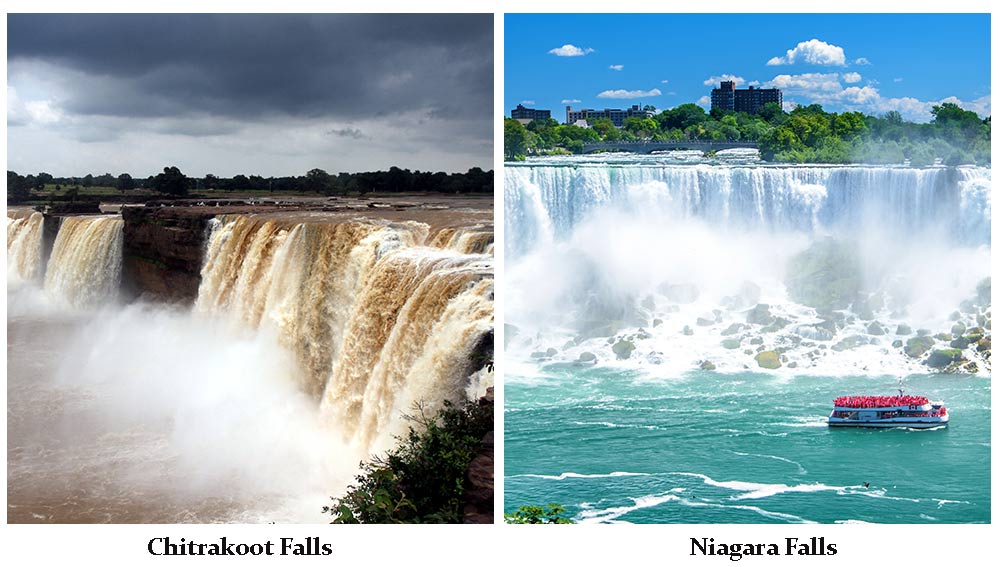 The Niagara Falls on the border of the US and Canada are one of the most visited natural wonders in the world, and rightly so, being the widest waterfall on earth. People who want to see a similarly awe-inspiring place in India must visit Chitrakoot Falls. At 300 metres, these horseshoe falls, situated on the Indravati River in Chhattisgarh, are the widest in the country. The voluminous water, which roars down the hills during the rainy season, has earned it the name, Niagara Falls of India. 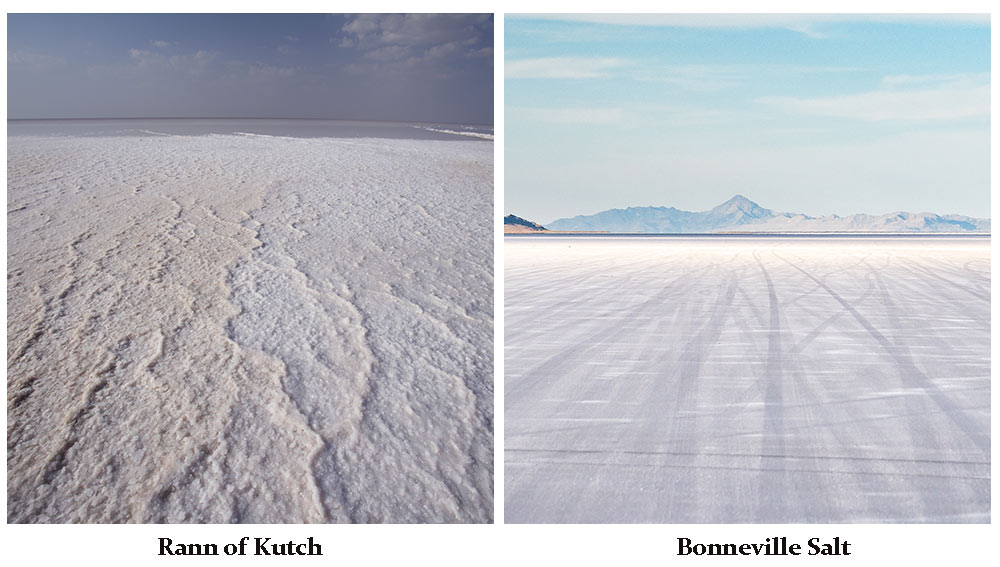 Those with an insatiable ‘need for speed’ surely must know about the Bonneville Salt Flats in the US. Located in the state of Utah, these salt plains are where terrestrial vehicles set speed records. A vast expanse of white land surrounded by hills, which becomes even magical at night, is a true sight to behold. Equally breathtaking a sight is offered by the famous Rann of Kutch in Gujarat, with the additional perks of a cultural extravaganza. 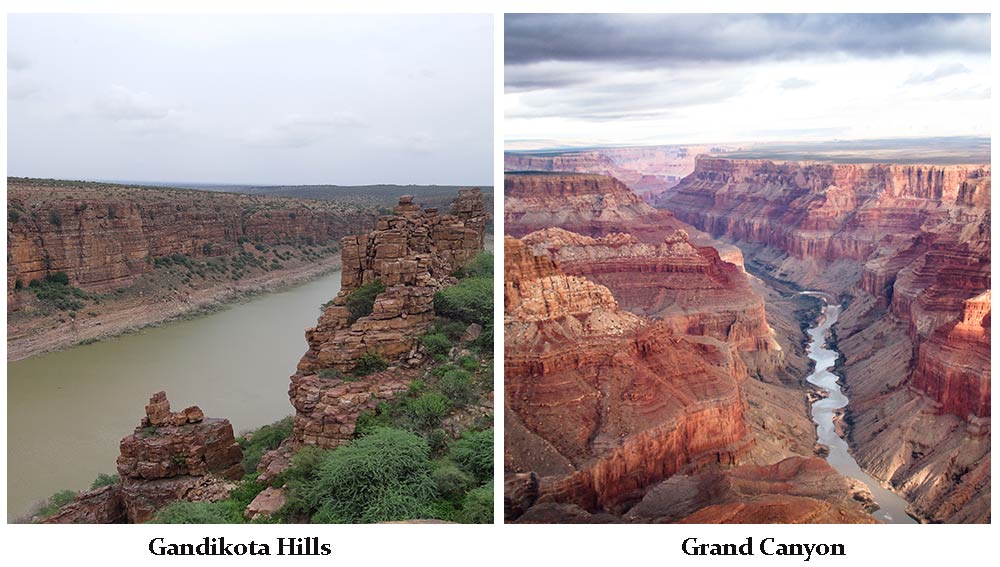 Many of us have seen the mighty Colorado River carving the Grand Canyon, but how many know a similar place exists in India? The Gandikota Hills in Andhra Pradesh boast the Pennar River, which flows through a canyon, cutting and carving wondrous shapes on the hillsides along the way. Apart from witnessing this spectacular sight from above the gorge, you can explore the nearby temples and Gandikota Fort. 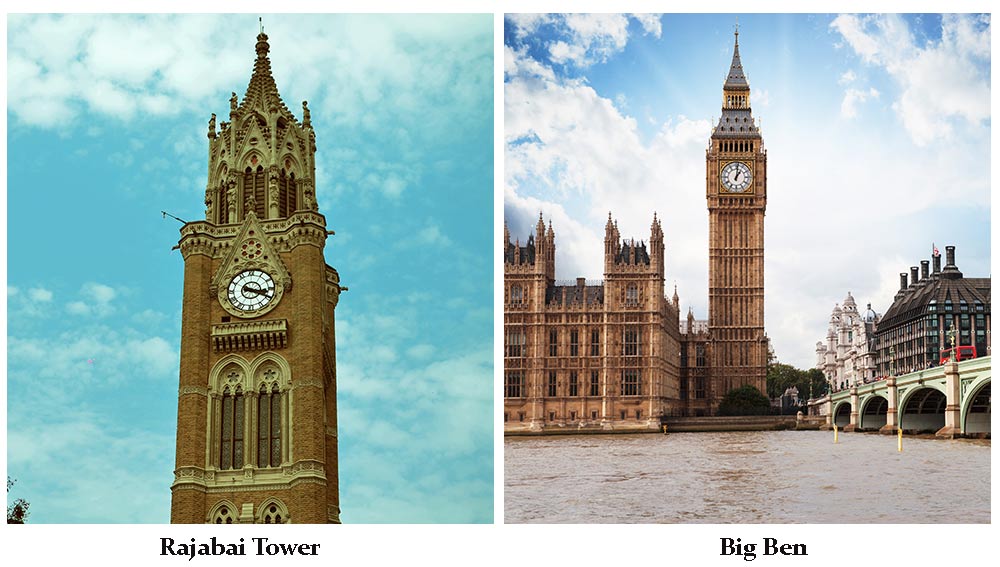 If London has the Big Ben, then Mumbai has Rajabai Tower! Constructed between 1869 and 1878 for ₹5 lakh, it has been modelled on the famous clock tower in the English capital. Built with a combination of the Gothic and Venetian architectural styles, much like the other nearby buildings, it boasts incredible stained-glass windows. Its facade features sculptures of numerous personalities from 19th century India. 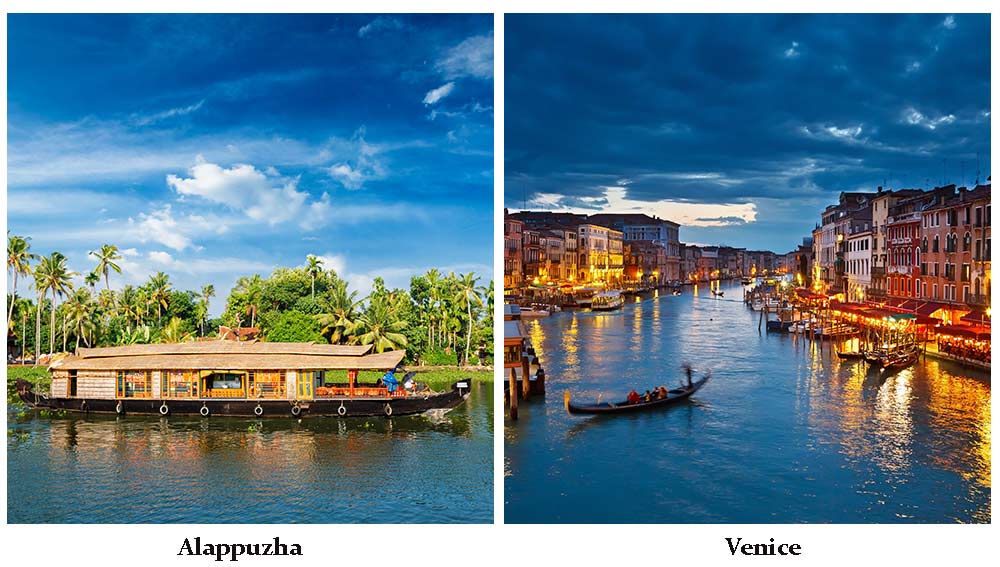 If you like the canals and gondola rides of Venice, then you will absolutely love the backwaters and boat tours of Alappuzha. Also known as Alleppey, this pristine resort town in Kerala is set on the banks of the backwaters of Vembanad Lake. Swaying palms, calming silence, endemic wildlife and cool breeze will make you want to stay forever. Needless to say, when in Alappuzha, a stay on a houseboat is a must! 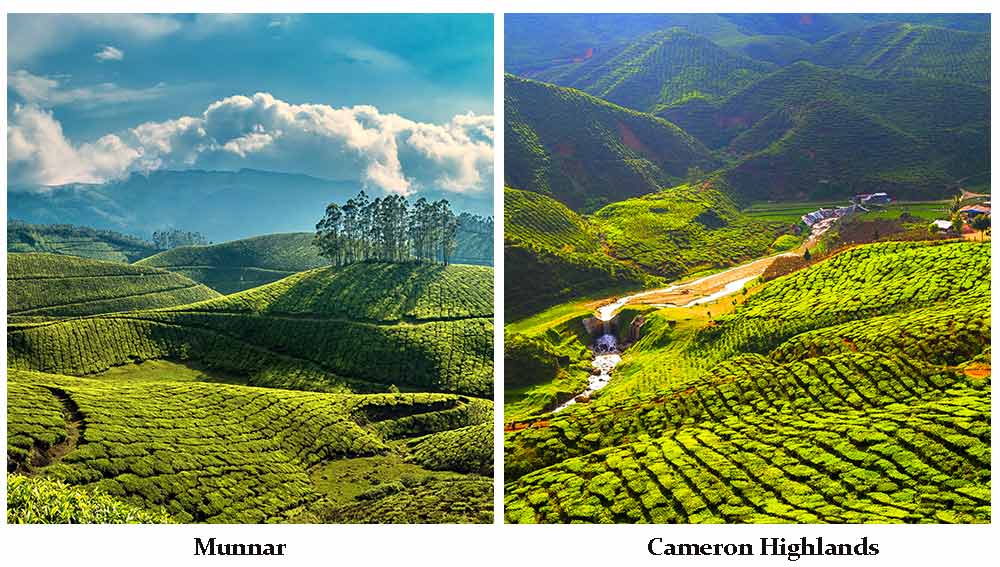 The Malaysian resort town of Cameron Highlands is renowned for its lush hills, endless tea plantations, misty mornings and cool climes, but so is Munnar. Just like the Malaysian British, who sought refuge from the country’s summers in Cameron Highlands, those living in South India did the same in Munnar. The Indian hill town also offers sights of endemic plants and animals and loads of waterfalls, lakes and peaks. 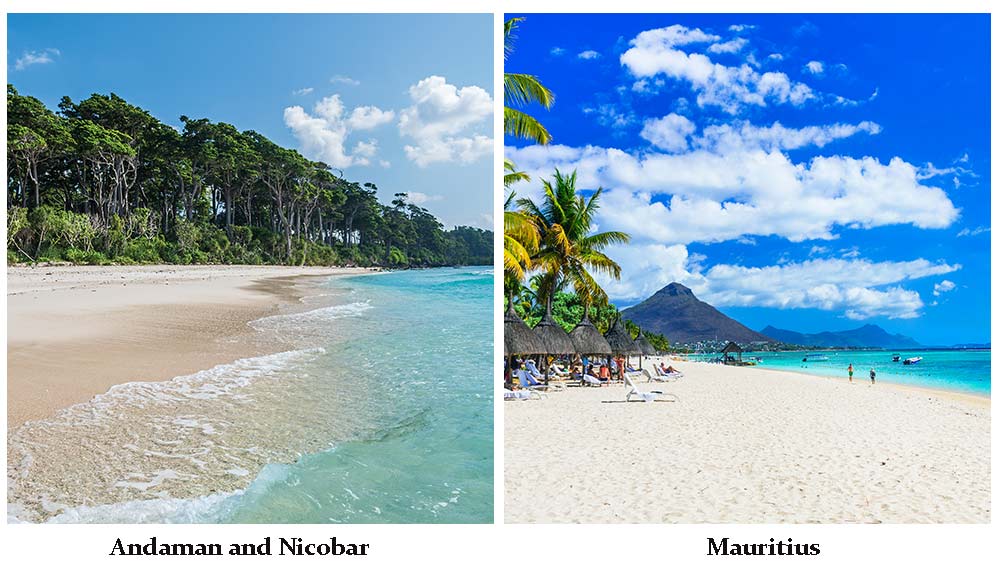 Lots of people visit Mauritius every year to relax on its white, sandy beaches, play in its crystal-clear seawaters, stay at luxurious resorts and see its marine life from up close, but the cost often ends up to be quite a lot. A similar place to do all this, and at considerable lower rates, is the Andaman and Nicobar Islands. It too has unspoilt shores, particularly Radhanagar, Corbyn’s Cove and Laxmanpur, and individual islets, such as Havelock, Little Andaman, Neil and Viper, which offer lots of memorable experiences. 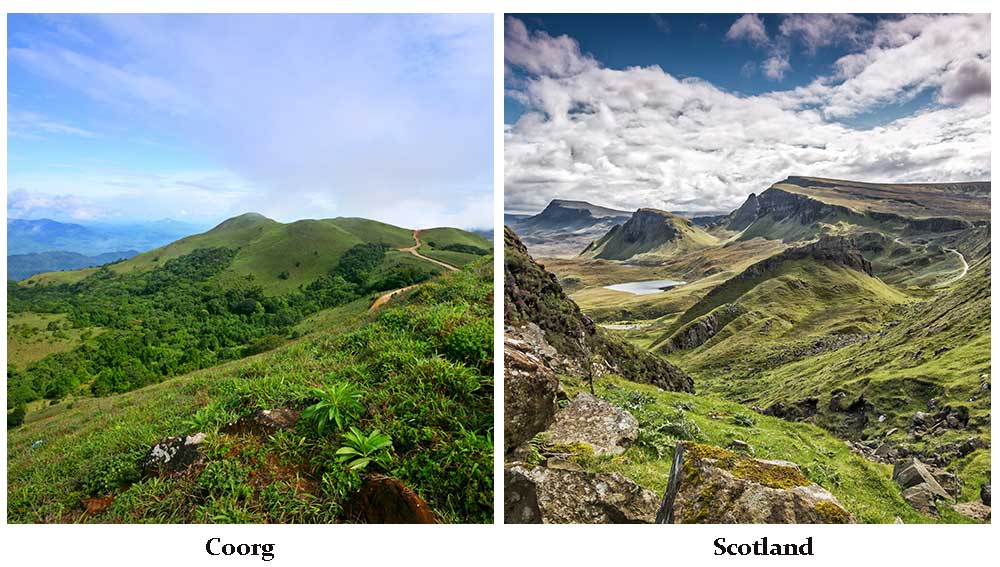 While Meghalaya is called the Scotland of the East, Coorg is known as the Scotland of India! The reason for the latter’s nickname is that it reminded the Scots, working with the imperial government in South India, of their homeland, with its mountains, cool climes and misty landscape. So, which place better resembles Scotland: Coorg or Meghalaya? Guess you will have to visit them both and see for yourself! 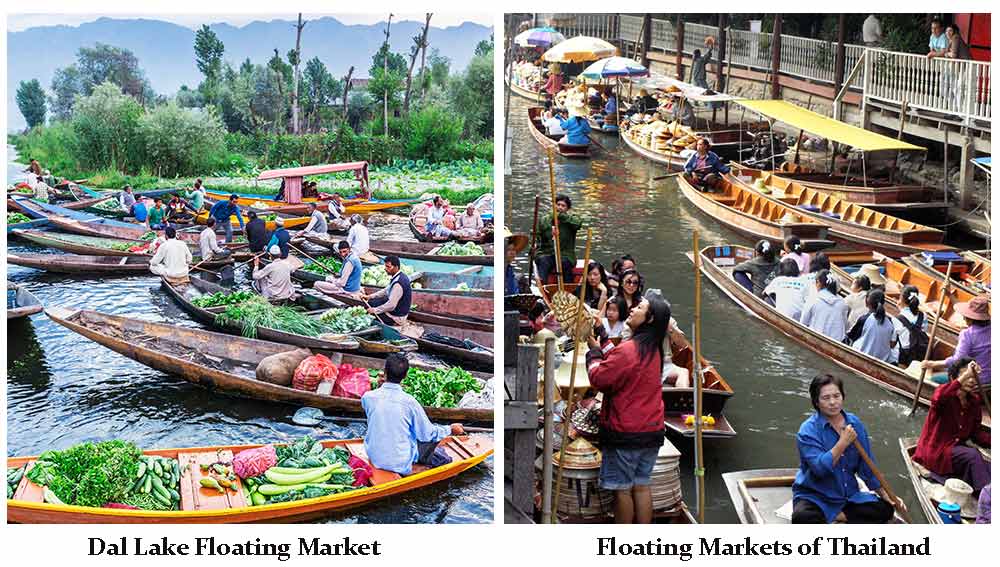 Apart from the tulip garden, Srinagar has one more place which resembles an international tourist spot — the floating market on Dal Lake, which is similar to those in Thailand. Every summer morning, vegetable and fruit sellers from around Srinagar sell their fresh produce on the lake, on their shikaras! And, it is not just food stuff, but also fragrant and colourful flowers that can be bought here. 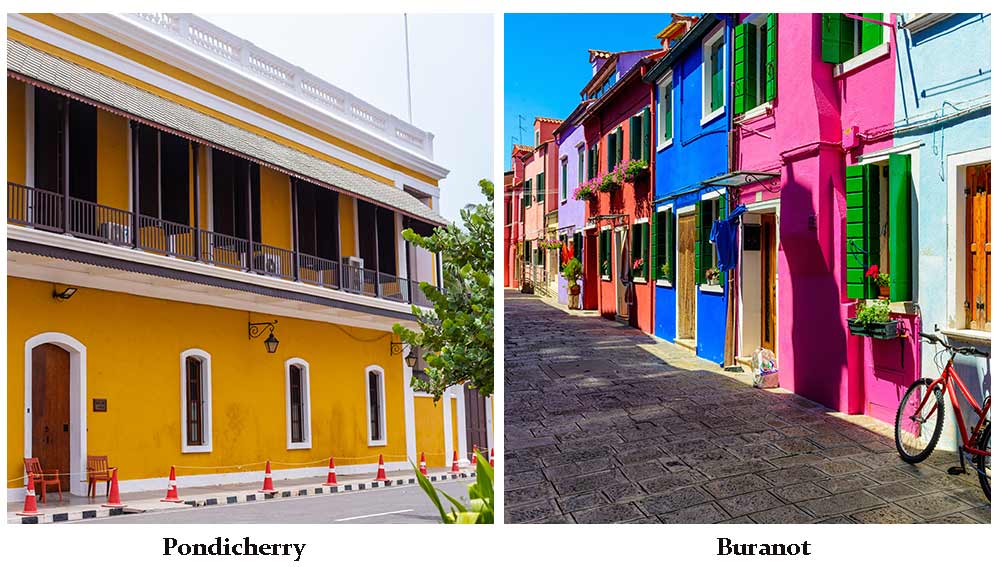 The union territory of Pondicherry, particularly its French Quarter, has similarities to the island of Burano in Italy. Both places feature brightly painted houses with typical European architectural features. Pondicherry has an array of sandy beaches, colonial-era churches, ornate temples and Parisian cafes for you to explore. Then there are the well-known Aurobindo Ashram and Auroville, which are perfect for peace seekers. 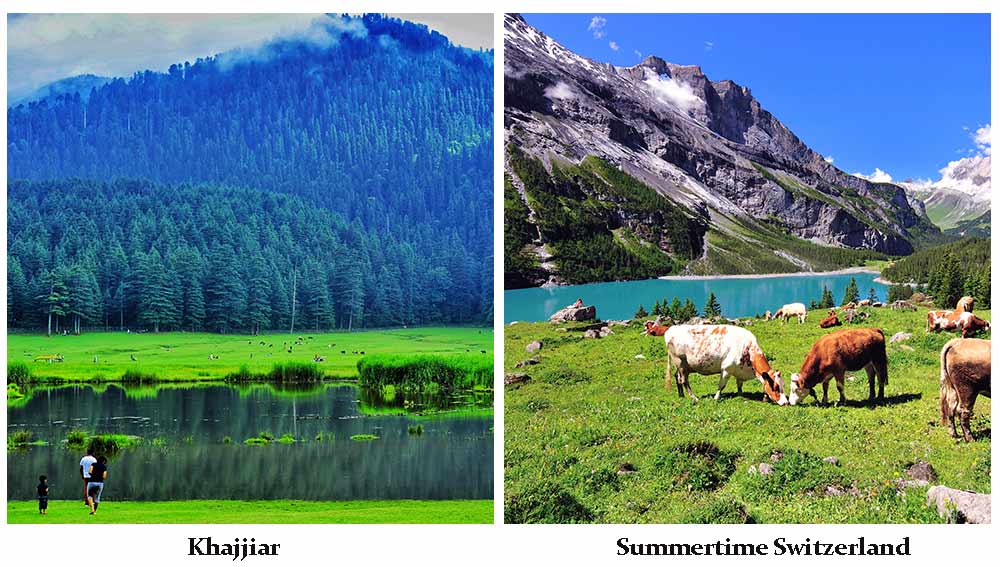 If Gulmarg reminds tourists of the snow-covered Swiss Alps, Khajjiar transports them to the lush summertime pastures of Switzerland. One of the few places in India with a rolling grassland, high peaks, lake and coniferous forest, Khajjiar is rightly called Mini Switzerland. The prospects of just sitting on the meadows, looking around, walking amidst high deodars and simply making merry bring loads to this small place in Himachal Pradesh.

Intrigued? Now you know where in India you can have experiences you would in an expensive international destination. So, what are you waiting for? Book your tickets and hotels, and zoom away for that much-over-due vacation.