Why is Basilica of Bom Jesus the Best Church in Goa?

My love affair with Goa dates back to my childhood when my parents first took me there on a holiday. I still remember the milieu of sea, sand, and sunshine, which was an incredible experience for the curious child in me. As I grew up, Goa became my go-to destination and I kept going there again and again. I went there with my college friends to celebrate our graduation, with my bestie to mourn and drink and cry when I had my first heartbreak, with my spouse to celebrate our romance, and my colleagues to have a bash after appraisals and so on and on. I only needed reasons and I always found one. And more often than not, my focus was on beaches and pubs with one notable exception – the Basilica of Bom Jesus. Believe it or not, I’ve visited this church on almost all my trips.

So, what makes this church so special to me and also to the millions that throng there every day? To begin with, it is the most renowned church in Goa and truly a one-of-its-kind monument. Boasting of historical significance and structural uniqueness, it stands as the best church in Goa and there is more than one reason for that. If you are intrigued by this famed church, let me reveal to you what makes it such a matchless destination to visit in Goa. 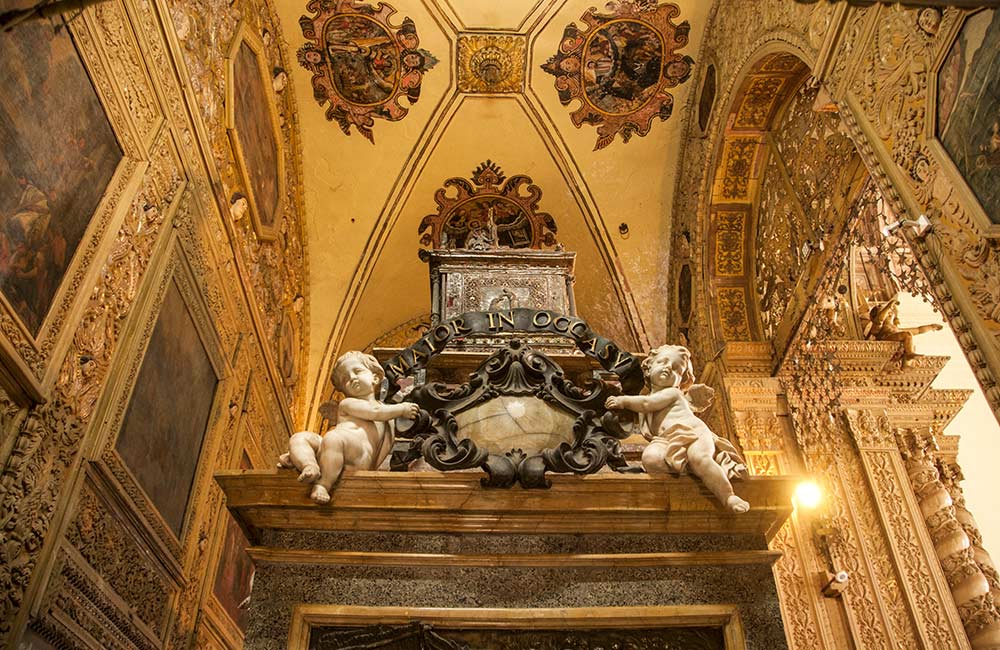 Four hundred years is by no means a short timeframe for a monument to leave its mark on the sands of time, isn’t it? Let’s start at the very beginning. The foundation stone of the church was laid way back in 1594. After more than a decade of construction, it was finally completed in 1605. Standing strong since then, this 400-year old church has achieved the distinction of being not just the oldest church in Goa, but also one of the oldest churches in the whole world. This fact in itself places the Basilica of Bom Jesus in a league of its own. Also, it is the first church in India that was raised to the status of a minor basilica in the year 1946. And if you didn’t know, the church is dedicated to the infant Jesus. 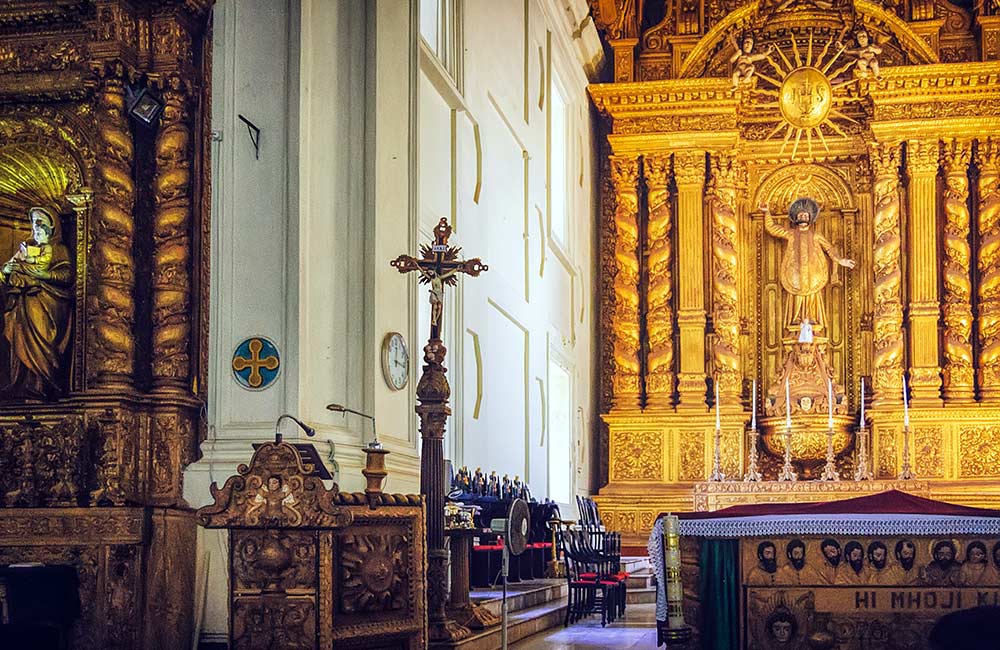 No, you don’t have to be a connoisseur of architecture to appreciate its beauty. I knew close to nothing about architectural styles when I first visited the church. But the church had an irresistible charm and only when it started growing on me that I began researching more about it and its construction. Here’s everything I know:

One of the first things I noticed about the Basilica of Bom Jesus was that its exterior has a non-plastered look. This is in sharp distinction to the other churches in North Goa or South Goa for that matter, all of which exhibit plastered exteriors. However, this doesn’t take away anything from the architecture of the magnificent edifice that was built with laterite stone. If anything, it adds a distinctive touch to the whole structure. The church is a splendid example of baroque architecture in India.

Adorned with triangular roofing, the church boasts of marble mosaic floor. But it is the ornamental interiors of the monument that left me breathless, every time I visited the place. I was fascinated to see the intricate works of precious stones that enhance the beauty of this architectural masterpiece. The spacious church houses the main altar, two chapels, and a sacristy along with a choir. The elaborately gilded altar is among the major attractions of the church. Though the façade is decked with carvings and pillars, the simplistic Renaissance style layout imparts the structure an elegant look. No wonder, the Basilica of Bom Jesus seems to cast a captivating spell on its visitors!

A Church with a Mummy 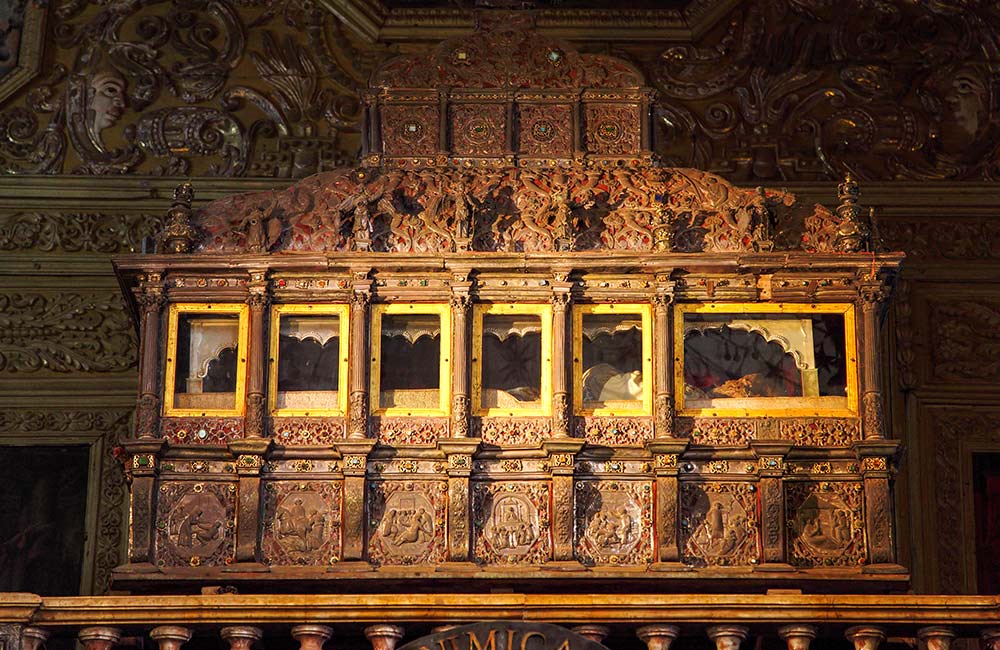 A remarkable thing to note about the Basilica of Bom Jesus is that it houses a mummy. Yes, that’s true and that was one of the major attractions when I first visited the church! For me, the word mummy had always been synonymous with Egypt and pyramids, so when I heard there’s a mummy right here in Goa, it kindled my curiosity.  This Goa church mummy is of a renowned saint named Francis Xavier. He was the co-founder of a religious congregation (called the Society of Jesus aka Jesuits) along with St. Ignatius Loyola, who was his close friend.

There is a fascinating tale related to the mummy. When St. Xavier died in 1552, his body was initially taken to Portuguese Malacca. After a period of two years, his body was shipped to Goa. Going by popular tales, when the body arrived in the church, it was in a fresh condition without any decay. Interestingly, the saint’s mortal remains are in a good condition till this day, more than 400 years after his death. His remains are taken out once every ten years for public viewing. According to prevalent beliefs, the saint possesses miraculous powers of healing. Even today, scores of people visit the church from all over the world to witness this miracle.

The mummy is kept inside a glass container that is enclosed in a casket made of silver. This casket remains atop the three-tiered bier that was specially built for the purpose by the Duke of Tuscany. He built it in exchange for the saint’s pillow on which his head rested for many years following his death. Apart from these relics, the church also exhibits a huge collection of paintings that are related to the life of the famous saint.

There’s no denying the fact that the Basilica is among the most revered churches by Christians the world over. It is also among the biggest churches in Goa. But do you know that this church is recognized as one of the UNESCO World Heritage Sites? This fact again reinstates that it is a class apart from the other famous churches in South Goa and North Goa. When you are in Goa, make time to visit the church and it will be totally worth it, I swear. After all, you don’t get to see a UNESCO World Heritage Site and a 400-year old mummy every other day!

Relics of Jesuit Rudolf Acquaviva and the Others

I was surprised to know that the Basilica of Bom Jesus is home to the relics of many other saints apart from St. Francis Xavier. Among them are Jesuit Rudolf Acquaviva and his companions Antoni Francisci, Francisc Aranea, Alphons Paceco, and Petrus Berni. They were martyred in 1583 at Cuncolim. One of the rooms of the church preserves their relics.

If you are a history buff, you will love to know that Jesuit Rudolf Acquaviva was a bosom friend of Emperor Akbar. Legend has it that such was the influence of Acquaviva on Akbar that he had even convinced the Emperor to convert to Christianity. You can even find the relics of several Japanese saints like Diogo Cisary, Paul Miqui, Joao Goto, and their companions in one of the rooms within the church.

The church remains busiest during the Feast of St. Francis Xavier. This is an annual fest held every year on the third day of December. A nine-day devotional novena precedes this feast. Open-air masses and other festivities mark the days. Large crowds accumulate at the church complex during this annual feast to take part in the festivities and masses. If you are interested in attending the festivities, plan your trip during that time of the year. In case you prefer a less crowded atmosphere, it will be best to visit the church at other times of the year.

But if you want to witness the exposition of St. Francis Xavier, you will have to wait for some more years for that. The saint was last given an exposition in the year 2014. That means you won’t get the next opportunity to witness this event before 2024.

There is no doubt that the Basilica of Bom Jesus tops the chart of the most visited churches in South Goa as well as North Goa. For me, it is not just a religious destination; it is also a cultural landmark. Just like the sandy beaches are an integral part of Goa’s identity, the church also remains deep in the cultural web of the place. So, when you plan your visit to Goa, do not miss out on this heritage destination. But do not forget the other major attractions of Goa, like the Aguada Fort, Mayem Lake, Cabo Fort, and the Church of St Francis of Assisi to name a few. Anjuna Beach, Baga Beach, Calangute Beach, and Palolem Beach are also must-visit places. (Ah, here I go again, talking about beaches!)

If you plan your travel during the festive season of Christmas and New Year, make sure to book hotels in Goa well in advance. That is the time when Goa witnesses the maximum rush. In case you want to go on a budget trip to Goa, the best time is to go during the off-season. Whether you are planning your visit during the tourist season or the off-season, one thing is sure: Goa is going to offer you a memorable experience that you will live to cherish forever. So, what are you waiting for? Book your tickets and get ready to be in the land of sand and the sun where infant Jesus awaits you in the Basilica of Bom Jesus!