Come autumn and several cities across India get into a frenzied mood to celebrate one of the biggest festivals of the country, yes, Durga Puja. With extravagant stage décorations called pandals, dance and music, processions, cultural events, and of course, non-stop food and shopping, this multi-day festival breathes a new life into cities and the people therein. To put simply, you don’t just ‘celebrate’ this festival; you experience it! And here’s our guide to help you experience Durga Puja at its best this season.

Looking for budget hotels? Click here to find the best deals in cities all over India. 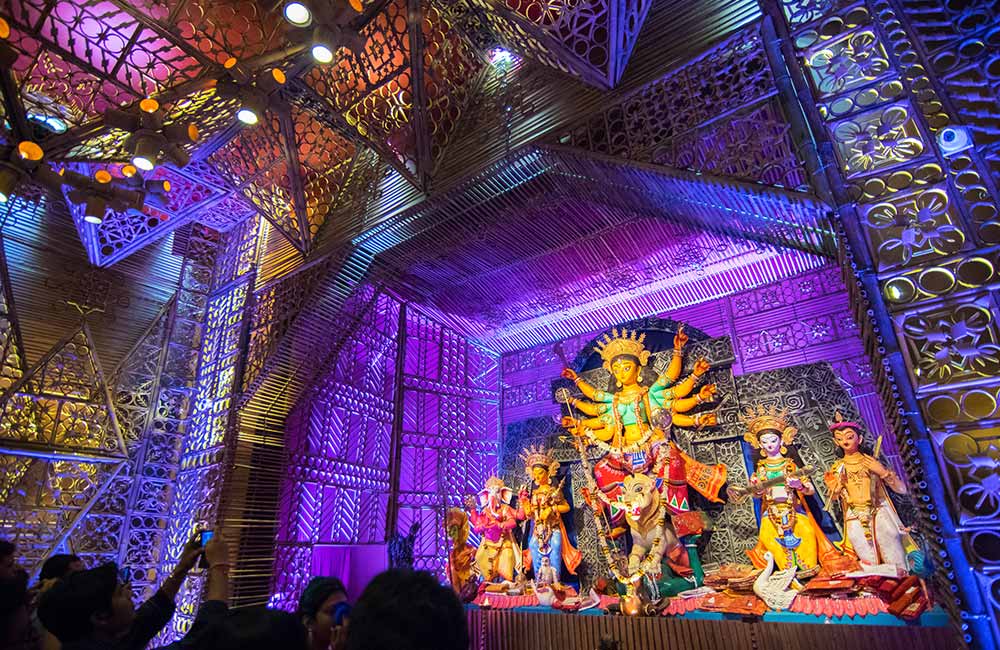 As the name suggests, this annual festival reveres Goddess Durga and marks her victory over the deceptive and shape-shifting demon Mahishasura in a fierce battle. That’s why she is also known as Mahishasura Mardini (the slayer of Mahishasura). As such, the premise of the festival is religious. However, Durga Puja is not limited to being just a religious fiesta. It is also celebrated as a post-monsoon harvest festival in some places, where the Goddess is worshipped as the mother-power behind all creation and life. The dates of Durga Puja coincide with that of Dussehra or Vijayadashami, which marks Lord Ram’s victory over Ravana. Unsurprisingly, you can often find a mix of these two traditions in the festivities across India.

When Is It Celebrated?

Durga Puja is celebrated in the month of Ashvin as per the Hindu calendar. According to the Gregorian calendar, the date usually falls between September and October. In the year 2021, the festival starts on the 11th and ends on the 15th of October.

How Is It Celebrated? 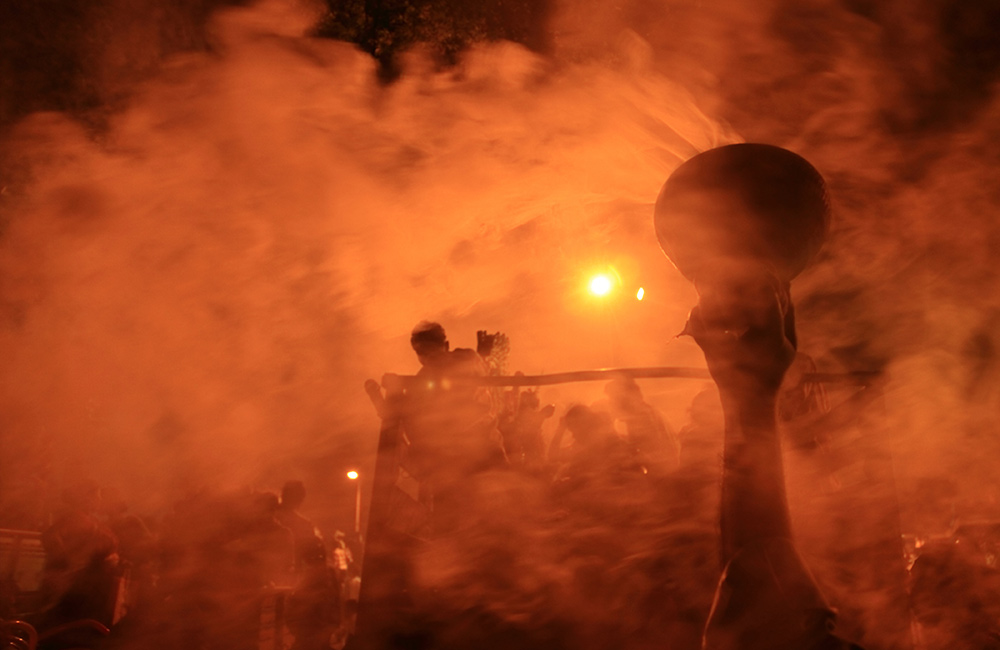 The Durga Puja festival is usually a 10-day long affair, out of which the last five days are marked with ceremonies, rituals and celebrations. Here is an account of how these ten days are celebrated:

Best Places to Visit in India during Durga Puja 2021

You can find a different flavor of Durga Puja in different cities and towns of India. The celebrations, activities, food and customs all differ, from one place to another. Let’s take a look at some of the best places to visit during the festival this year where you can soak in festivities and shop and eat to your heart’s content. 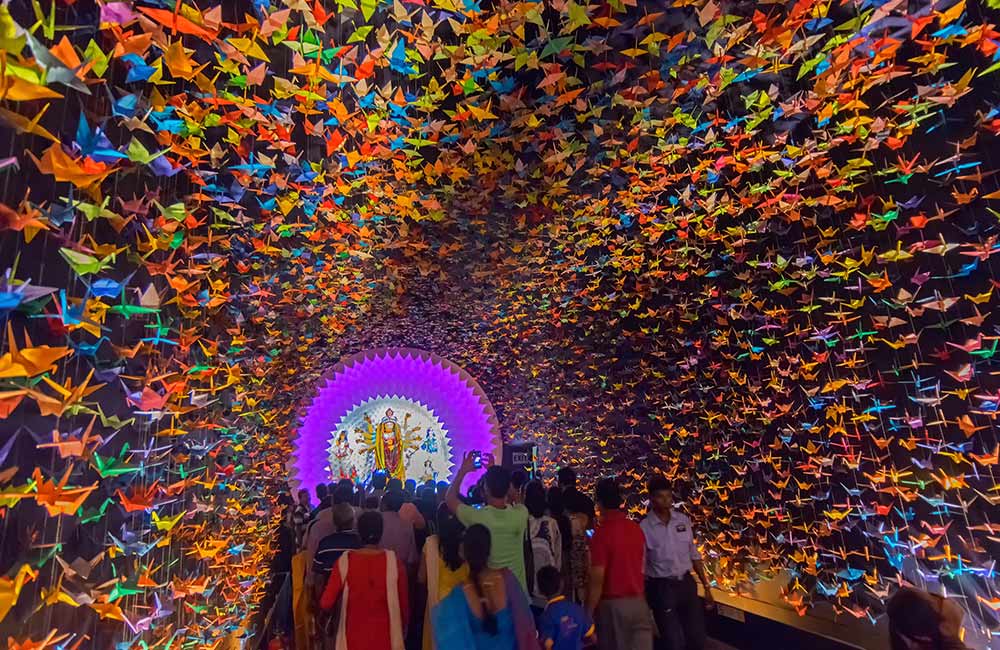 If it’s Durga Puja, there can be no better place than Kolkata to soak in the festive spirit. The City of Joy is the place where you can witness the highest degree of grandeur and frenzy. Hundreds of elaborately décorated pandals, fascinating illuminations, magnificent idols of Durga and appetising food options, all turn Kolkata into a fantasy land during the days of the festival. 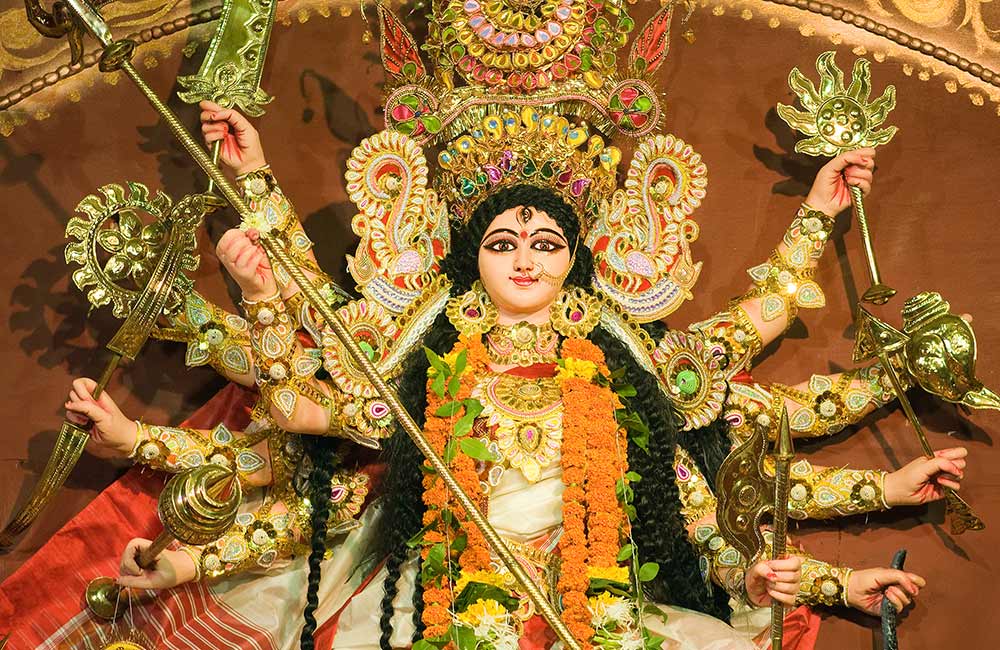 Durga Puja in Mumbai has a vibe of its own. Though the traditions followed here are quite similar to those at Kolkata, yet there’s a touch of modernity to the whole feeling of celebration. With more than a hundred pandals dotting the city’s landscape, you can have a great time pandal hopping in Mumbai and enjoying the gala spectacle. 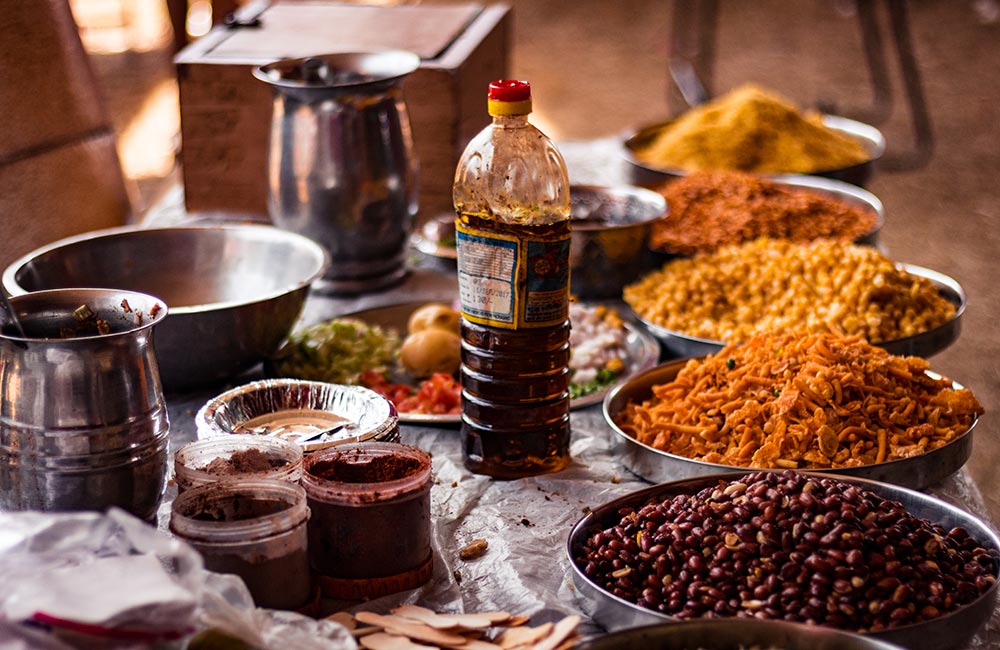 Durga Puja in Delhi is more about celebrating Lord Rama’s victory over Ravana. An interesting part of the celebrations are the Ram Lila performances held during this time, in which scenes from the Ramayana are enacted. But the best part is the burning of Ravana’s firecracker-stuffed effigies along with those of his son Meghnad and brother Kumbhkaran. But the city comes up with some spectacular pandals as well where the goddess is ritualistically worshipped during this period. 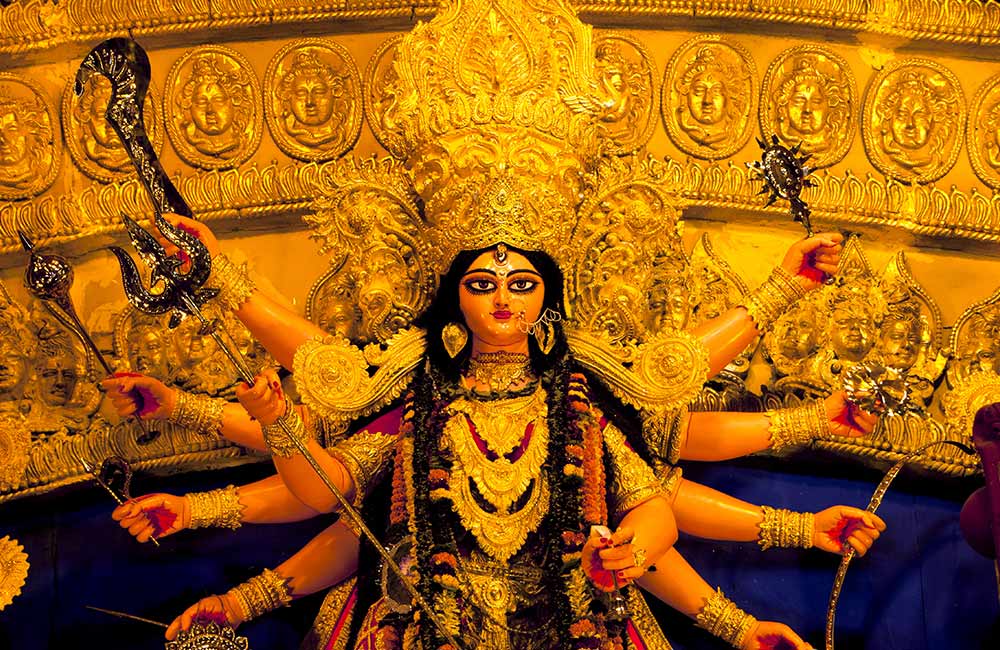 The entire city of Guwahati lights up with a festive vibrancy during Durga Puja. Around 500 community pandals are set up to celebrate the occasion. You can find impressive idols of the goddess placed inside theme-based pandals dotting the length and breadth of the city. Exhibitions and fairs are held at different parts of Guwahati during this time. 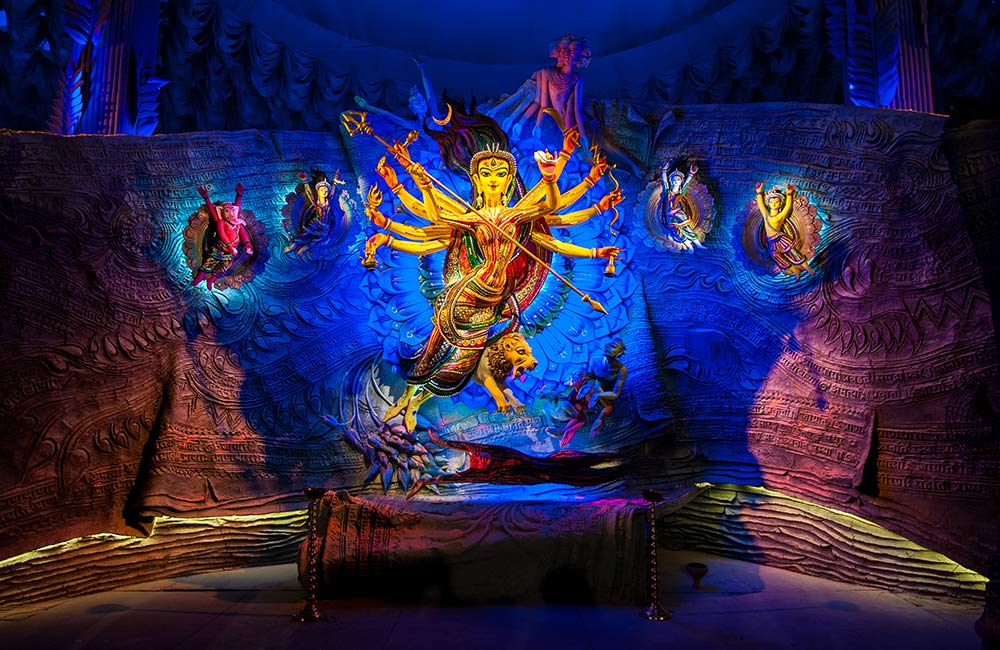 The holy city of Varanasi awakens with a magical vibe during Durga Puja celebrations. Large pandals come up in different parts of the city where the goddess is worshipped with unmatched fervor. The city also celebrates the occasion to commemorate the victory of Lord Ram over Ravana. You can see small children dressed up in various characters from the Ramayana enacting plays during this time. 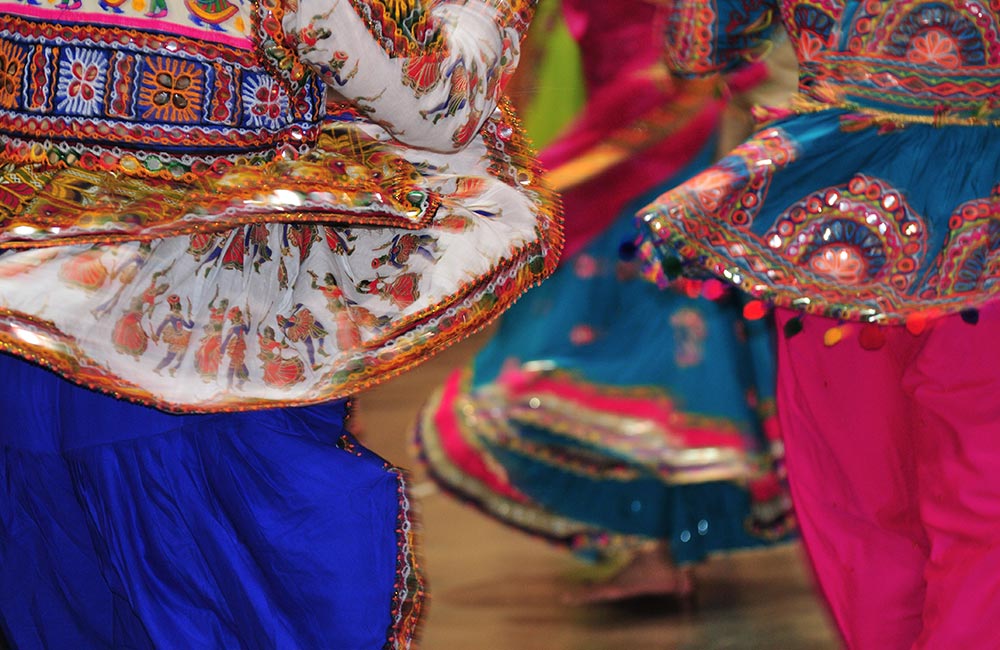 It’s impossible to miss the festive fervor that grips Ahmedabad during the Durga Puja and Navratri celebrations. The whole city decks up with lights, colors, and festivities. Ahmedabad celebrates the occasion to commemorate Lord Ram’s victory in the battle against Ravana. Dance, drama, and songs fill the air during the nine days of Navratri. People dress up in their traditional best and take part in Dandiya and Garba Raas performances. You can also find puja pandals where the goddess is worshipped in her Durga form.

10 Pandals you must visit in India during Durga Puja 2021

The best thing to do during Durga Puja is, of course, visiting different puja pandals to see the goddess and the pandal being presented in unique ways. We bring to you the top ten pandals from across the country that you must not miss out on visiting this year.

Living up to its reputation of enthralling puja revelers with amazing pandal décor, Sreebhumi Sporting Club in Lake Town has come up with a pandal that mirrors the palace of Rani Padmavat. The pandal and the idol, both are grand spectacles that you must not miss out on.

Each year an incredible spectacle awaits the visitors at the Deshapriya Park Durga Puja near Rash Behari Avenue in South Kolkata. No wonder, people from far off corners of the city come to see this pandal.

Known as Bollywood singer Abhijeet Bhattacharya’s puja, the pandal here is among the most popular ones in Mumbai. Various performances, events, and an array of food stalls keep the crowd glued to this place.

Organized by the Powai Bengali Welfare Association, this puja is known for its eco-friendly pandals. The Dhunuchi dance competition is a very popular event at this puja.

Counted among the oldest Durga pujas celebrated in Delhi, the Kashmere Gate puja draws in the crowd based on their grand pandal décor and beautiful idol of the goddess.

The theme décor at Baageshwari Devi Durga Puja Samiti each year is a delight that never fails to impress visitors. If you happen to be in the city, make it a point to visit this pandal.

Located in the heart of the city, the Athgaon Sarvajanin Durga Puja has been entertaining the people of Guwahati with their unique theme-pandals for quite a few years now.

They put up their first puja pandal way back in 1942. Today it is one of the most popular pujas of the city, thanks to the impressive décor of the pandal and the organized arrangement of food stalls and eateries.

This puja, organized by the South Madras Cultural Association, is undoubtedly the most popular one in Chennai. Starting from Anjali and bhog during the day to cultural programs in the evening, you can experience everything here.

Though this puja was started just over a decade ago, it has made a place for itself among Punekars. Famous for its splendid décor and lovely Durga idol, the puja pandal also acts as a hangout zone where you can enjoy the best of Bengali cuisine and buy handicraft stuff.

The list of the best Durga Puja pandals can never remain confined to a handful. To enjoy the real zeal and fervor of the festival, start your trip from Kolkata before you go about discovering the other cities and their pujas. Or, you can save the best for the last and start with some other city as well, the choice is all yours. Here’s wishing you a very happy Durga Puja!!