We’re so many cultures in one and each is unique with its own customs and traditions. The best way to experience this mosaic-like country is to visit and participate in its beautiful folk festivals. Get to experience different customs, beliefs, rituals and cuisines and come back with a new understanding of what our country really is. Ready? Here’s a list of the 12 most popular folk festivals of India you must experience:

Designed to give visitors a brilliant insight into the culture of Rajasthan, the Jaisalmer Desert Festival is one of the most popular and vibrant folk festivals in India. Played out over a span of 3 days, the festival showcases Rajasthani folk arts, dance and music and presents live dioramas. There are spirited Turban tying competitions, puppet shows, and sound & light shows among desert dunes. 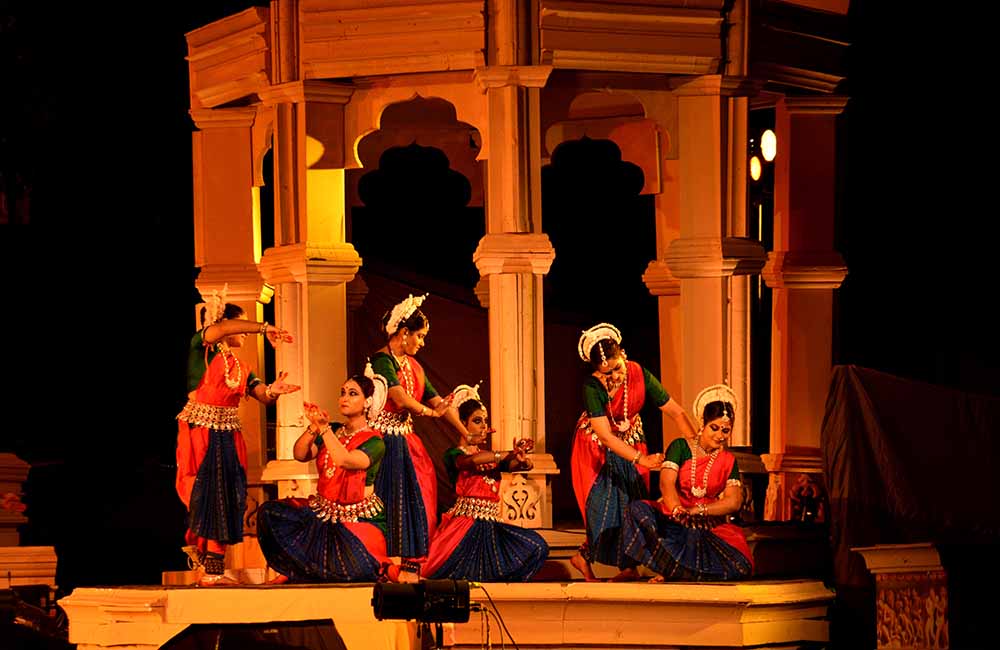 Organized by the Madhya Pradesh Kala Parishad, the Khajuraho Dance Festival celebrates India’s traditional dance forms that are performed against the backdrop of two popular Khajuraho Temples – the Chitragupta Temple and the Vishwanath Temple. The week-long extravaganza features top dance forms like Kathak, Bharatnatyam, Kuchipudi and Jagoi performed by the most acclaimed practitioners of the form. 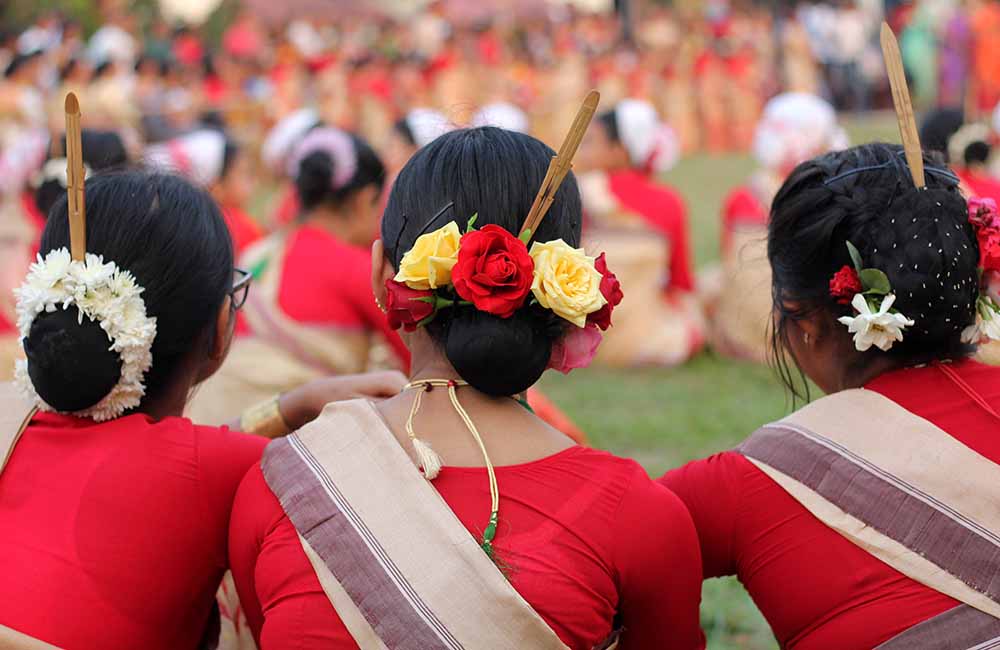 One of the largest folk festivals in India, Bihu is a non-religious festival celebrated in the state of Assam. There are in fact, 3 Bihu festivals throughout the year – Bohag Bihu or Rongali Bihu (when the crops are sowed), Kati Bihu or Kongali Bihu (harvest season) and Magh Bihu or Bhogali Bihu (end of the harvest season). Of the three, Bohag Bihu is the most famous one as it marks the Assamese New Year and is celebrated by week-long fasting followed by feasting, rituals and the Bihu Dance. 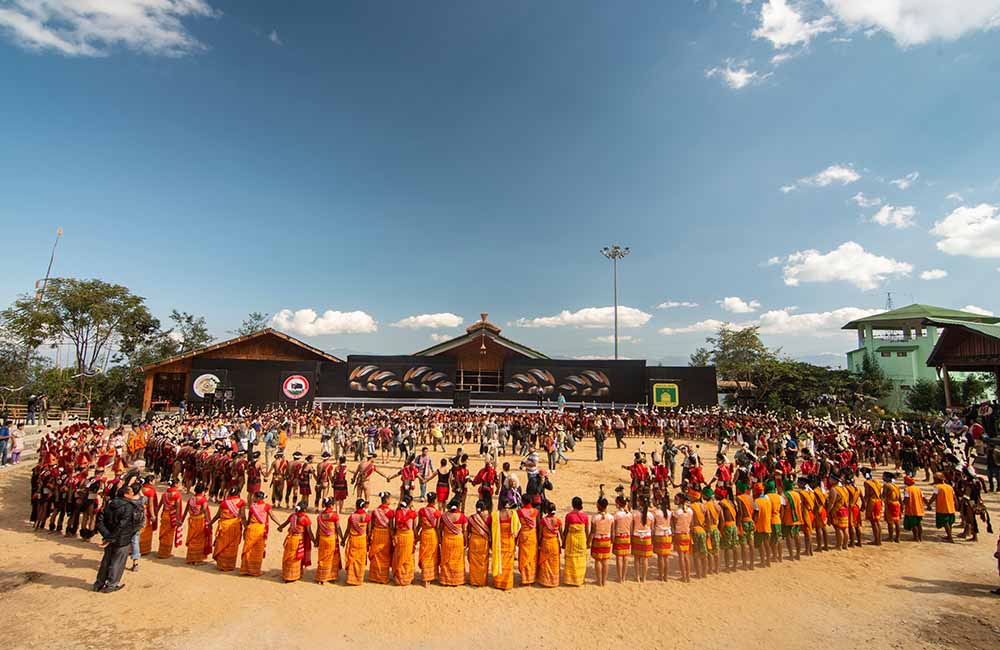 Organized by the Government of Nagaland, the Hornbill Festival celebrated indigenous tribes and their unique cultures. Named after the Indian Hornbill bird considered sacred in the northeast region, the festival aims to preserve and promote the old Naga culture. Be here in December to witness exotic performances of head-hunting rituals, war dance performances, bike rallies and log-drum performances. 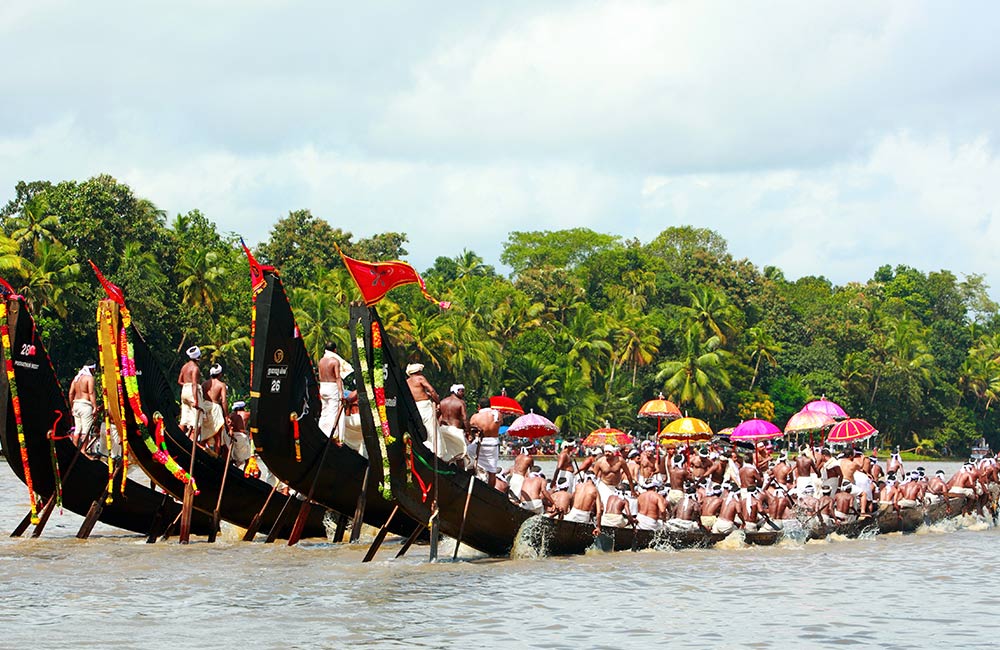 Come September and all of Kerala soak in celebration for Onam, the most important folk festival down south. Marked by pageantry, performances of more than 40 art forms of Kerala including Theyyam, Kathakali, Padayani, Neelakavadi among others and cultural programs, Onam is celebrated to mark the return of King Mahabali’s spirit to Kerala. In essence, it is a harvest festival and being part of it will be the most exhilarating experience. 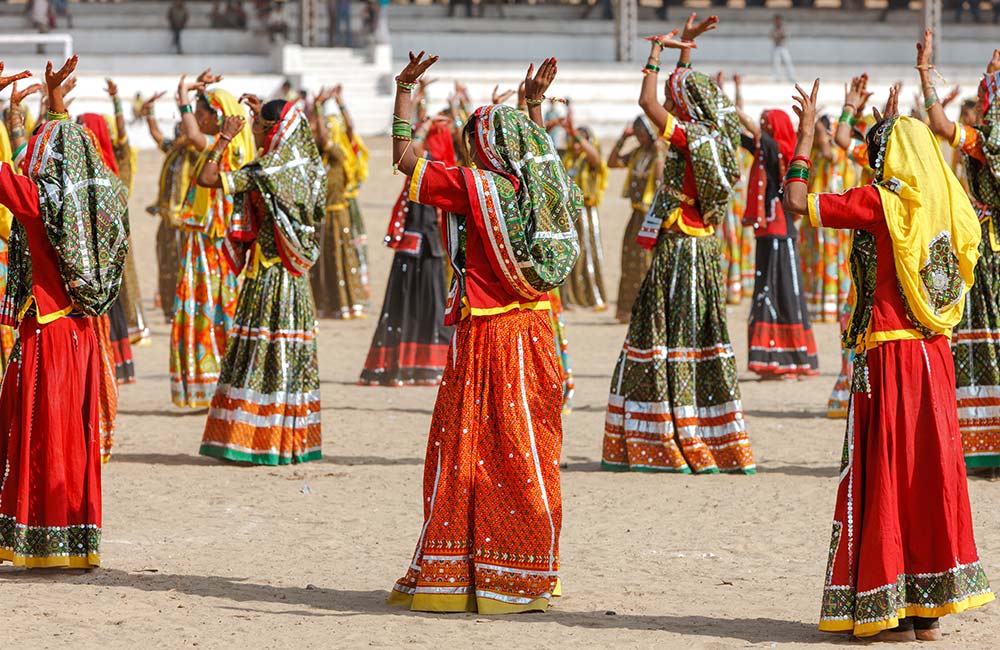 It started out as a camel trade fair 150-years-ago, but in the last few decades the Pushkar Fair or the Pushkar ka Mela has become an iconic folk festival of Rajasthan, India. With traders coming here with their camels and horses, foreign and domestic tourists and various fun activities held over 3-5 days, the Fair is quite the spectacle. The colorful, carnival-like atmosphere is made up of snazzily dressed up camels that participate in several contests. You might also want to witness the ‘Longest Moustache’ contest and take a hot air balloon ride while here! 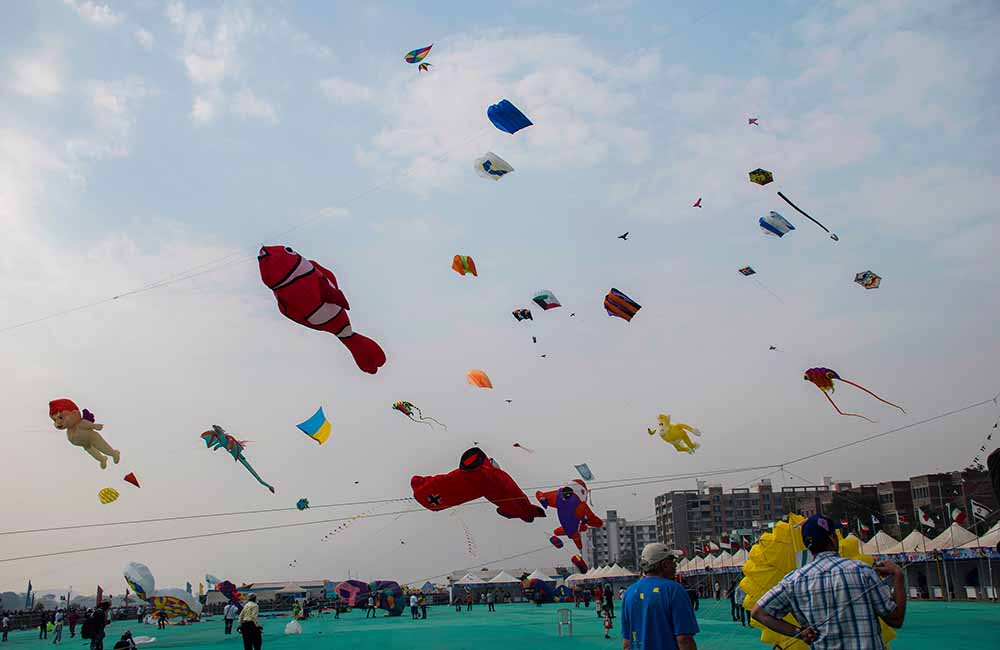 One of the most vibrant folk festivals of India is the International Kite Festival organized in Ahmedabad, Gujarat that takes place on January 14 every year – on the auspicious day of Makar Sankranti or Uttarayan. The International Kite Festival hosts master kite makers from all over the world and you can see Wau-balang kites from Malaysia, the llayang-llayanghave from Indonesia or the Rokkaku fight –worthy kites from Japan among others. Furious kite-fighting competitions take place throughout the day and you get to eat yummies like Undhiyu and Surati Jamun presented to friends and family. 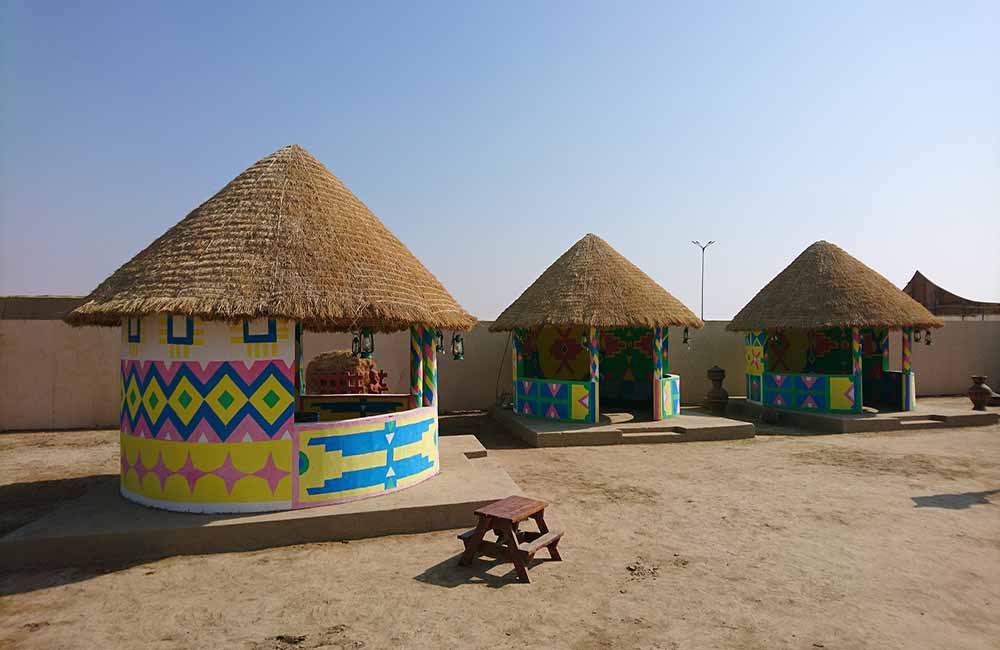 The Rann Utsav that runs for nearly 4 months every winter is one of the biggest folk festivals of India. Organized at an exceedingly large scale in the salty marshlands of Kutch, the festival celebrates the vibrant, mosaic-like culture of Gujarat with folk dance performances, music shows, immersive and interactive storytelling sessions, displays of Gujarat’s traditional handicrafts like mirrored embroidery work by its many pastoral communities and Kutchi weaves as well as miles of food stalls. Sounds like enough reasons to pack your bags and go! 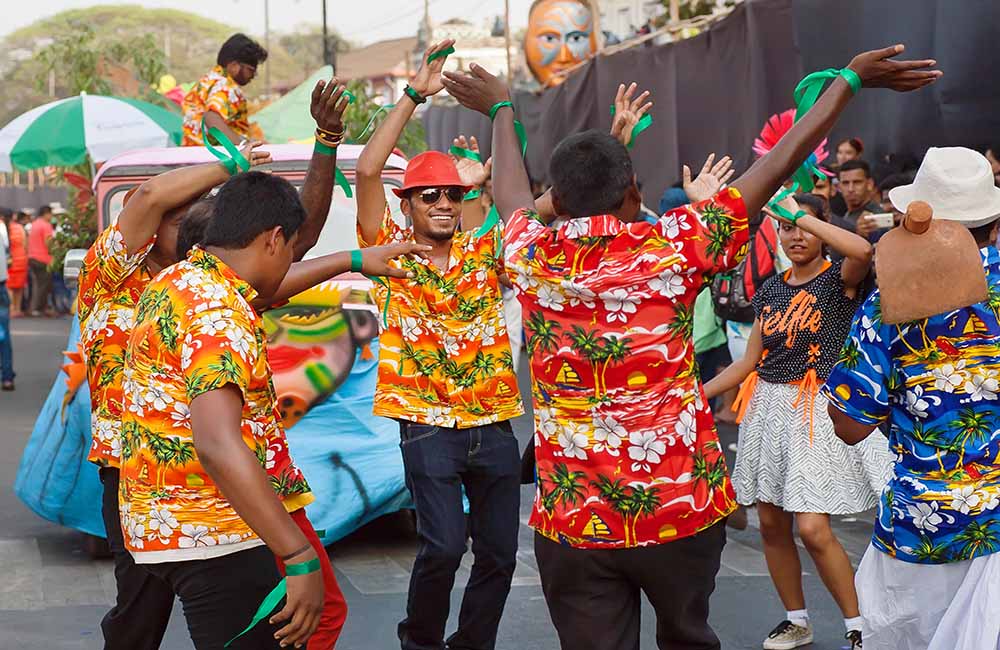 Every year, there’s one time in Goa when all the action shifts from the beaches to the streets and that is when the crazy, colorful Goa Carnival is on! One of the most fun folk festivals of India, the Goa Carnival is presided over by the mythical King Momo and his entourage. Boast of beautifully decorated float parades in various cities, masked dancers and live bands playing, ‘Dolkas’ – a traditional drum – along with tons of food stalls! Celebrated just before the austere 40 days of Lent starts, the Goa Carnival has but one aim – eat, drink and make merry! 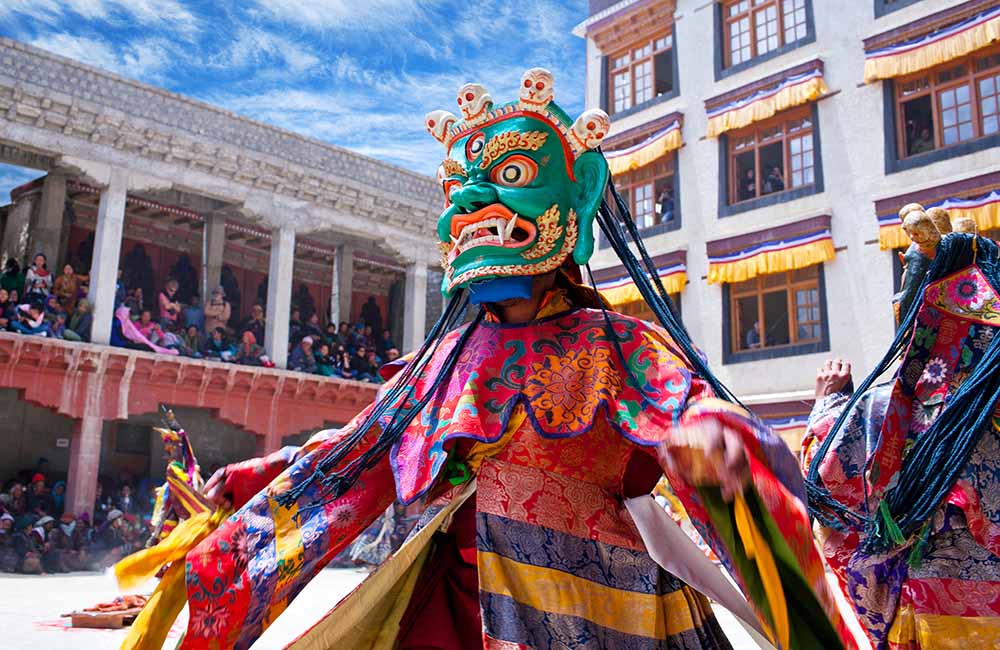 Dating back to the pre-Buddhist Bon era, the Losar Festival in Ladakh marks the beginning of the New Year and is one of the most exotic folk festivals of India. Prep for the festival starts well in advance with householders indulging in a serious round of spring cleaning, performers rehearsing their dance and music recitals and nearly everyone making ‘Lama Losar’ – lavish decorations offered to deities. The festival is marked by religious rituals taking place in domestic shrines or gompas and a plethora of cultural events. 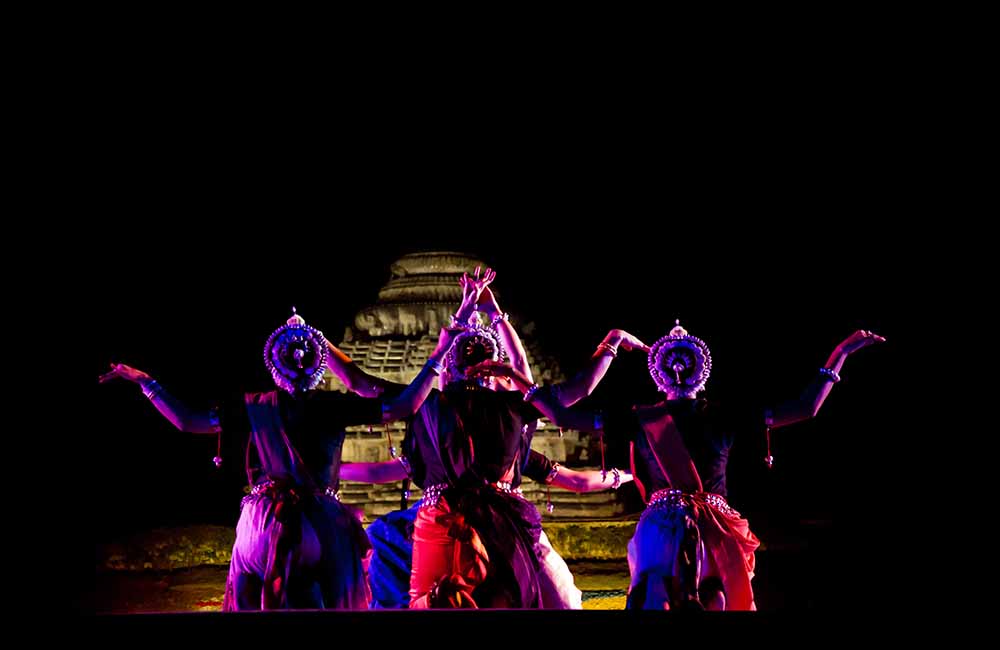 With dance performances against the backdrop of the iconic Konark Sun Temple, the Konark Dance Festival takes your breath away. It is one of the most popular folk festivals in Odisha, India that started with the aim of bringing together artists from across the world and creating an international platform for traditional Indian dance forms. Go here to be mesmerized by classical, folk and tribal dance performances at the Natyashala in the Konark Sun Temple and the venue’s inherent peaceful, spiritual atmosphere. 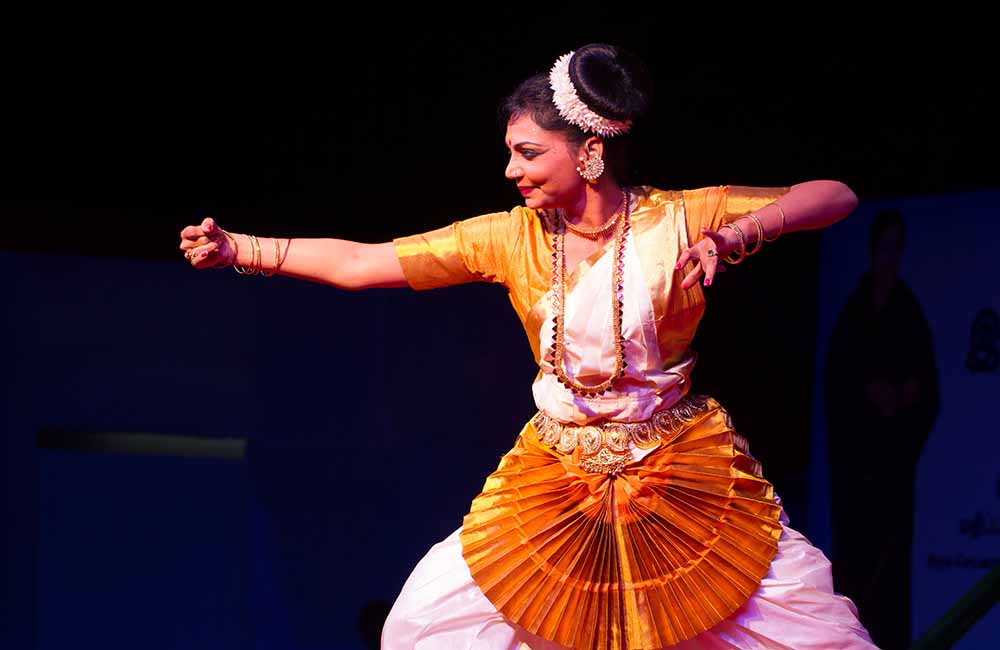 India’s classical dances are some of the most refined and celebrated in the world and watching a performance is soul-satisfying. But imagine 20 vibrant days of Bharatanatyam, Kuchipudi, Kathak, Odissi, Mohini Attam and Kathakakali performances by the most acclaimed dancers! Sounds like heaven, doesn’t it? Go to the Mamallapuram Dance Festival in Mahabalipuram to make it a reality. Organized by Tamil Nadu’s Department of Tourism, this is among the most spirited folk festivals in India that attract artists, dance troupes and eminent dance gurus from all over. Besides the performances, you may also want to see attractions like the rock-cut monolithic structures built by the Pallavas, Mahishamardini Cave and the Varaha Cave.